The Beauty of Indie 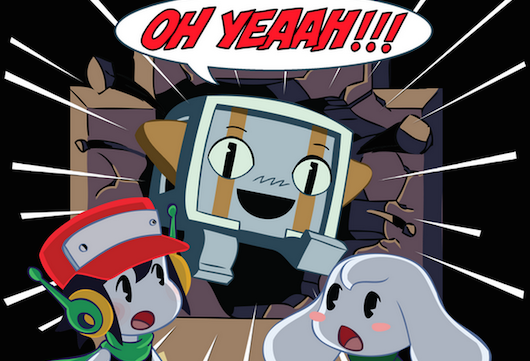 We really need to go back to the old blogging layout....

I've been a little behind on my blogging craze lately, I guess these things happen when you get a job(s). But you know what, we just keep on going! This week's focus is going to be on indie gaming, and all the awesome things that it brings to the table. My game of focus? The good ole hit from 12 years ago, Cave Story!

Cave Story was probably one of the first big indie titles to hit it big in terms of gaining mass popularity. I remember the first time I saw it - I was over at a friends house getting ready to play Dance Dance Revolution, and he was on his computer playing Cave Story. I didn't think much of it at the time...but over the next few weeks he was playing it and talking about it all the time...so I decided to give it a go as well. I was impressed right away! There's nothing overly flashy or amazing about Cave Story - it's another platformer/Metroidvania style game, but the story is light hearted and simple, and the gameplay is also very fun! The character sprites and animations really grew on me as well - this was probably the game that sparked my interest in retro gaming (along side my love for Snes games). There were so many things to enjoy, and it all came along without the big budget and mass media hype!

It's all about da Benjamins

There really is beauty in simplicity. Maybe that makes me a bit of a hipster? I find that the more creative a game can be without throwing millions of dollars into it, the more I truly appreciate it. Games like Destiny (which I do enjoy), make me so frustrated because they were developed with the knowledge that yeah, development will throw millions of dollars into it....but people will buy it. It's just business practice. As an accountant, I get that notion...however when we put so much emphasis on budget and spending, we completely neglect the purpose of making/playing a video game in the first place - ENTERTAINMENT. Cave Story was made by one man and was developed on his free time. It's a perfectly fun, heart felt game that delivers an experience that Destiny couldn't hold a candle to. I'm not saying there isn't a market or an important place for AAA gaming in this industry...but the more we buy, hype, and spend, the more we get away from what gaming should be all about.

We do have to be weary of some indie tactics as of late though. Money is a driving force in this time and age, and the power of kickstarter programs has become a force to be reckoned with. There's absolutely nothing wrong with getting behind the idea of a game, and reaching out to help it become successful...however, we're starting to see that some developers are purposefully taking advantage of this notion and exploiting it for all that it's worth (Keiji Inafune?). Indie titles are unique because they are made by up and coming developers who still want to make games for making games, and want to deliver a fun experience to their audience. Not all indie games are perfect, and not all of them go on to become something great. I've personally grown to enjoy them however, because it's fun to see what up and coming minds are creating. It's fun to get behind the little guy and support them. It's not fun however to be taken advantage of, and this is why it's important for us as consumers to be weary of what projects truly deserve our attention. This is all something that will vary from opinion to opinion...but knowledge is indeed power.

Get your game on!

Question of the week: What's your favorite indie game? There are many diamonds in the rough out there to sort through, share you experiences in the comments section below so that we can all check them out! If you haven't checked out Cave Story yet, I would HIGHLY recommend it! I've been streaming it on Hitbox recently too, so keep an eye on my Twitter if you'd like to drop in and check it out! :D