It’s been a pretty interesting year for me, at least as far as video games are concerned. I’ve played more games than I can count and enjoyed more than I thought I would. Plenty of triple-A titles have captured my attention, alongside just as many (if not more) indie titles. Like the gothic and grotesque beasts of Bloodborne, I have tried to devour just about every video game that has crossed my path.

Of course, this year hasn’t been without some disappointment and dislikes. This isn’t surprising, really, all of my friends know me as someone who hates a lot of things. This list includes bucket hats, any show on television that my girlfriend wants to watch, stupid cars, and the occasional video game.

To say that I hate (some) video games is maybe just a little facetious. It takes a lot for me to hate a game, but as I mentioned earlier, there are plenty of games that have let me down. 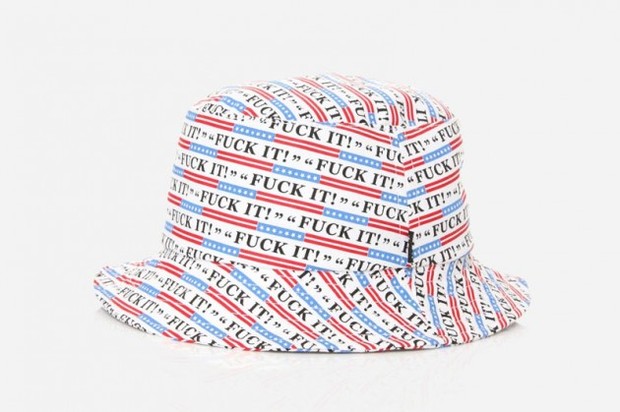 I have pretty varied tastes when it comes down to games. I grew up on role-playing games and I’m not ashamed to say that I will always keep a candle lit for them. Shooters, puzzle games and every other genre conceivable get just as much attention as my beloved RPGs of yore, however, because it’s pretty damned hard to be faithful to a genre that just isn’t the same as the one you fell in love with. And besides, those new indie guys that moved in nextdoor are looking pretty handsome…

Subjectivity is a strange concept to some people in the video game world. To some, the idea that a critic can have an opinion – let alone one that is personal – when it comes to a game is an unflinching and condemnable offense. To that, I say piss off. Here’s my opinions about some games that I really wanted to (and in some cases expected) to like, but ultimately uninstalled a few hours after starting them. 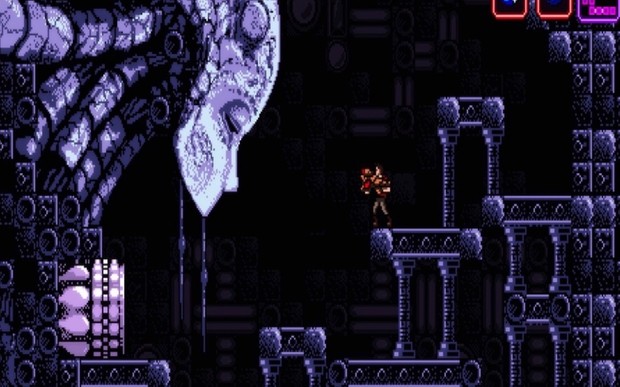 I love everything about Axiom Verge in theory. Seriously, just whispering the world ‘metroidvania’ is enough to get me all hot under the collar and throwing a sci-fi, freaky world at me is the proverbial icing on the excitement cake. Axiom Verge has all of that and then some. Unfortunately, it wasn’t anything really good as far as I was concerned.

Because of its genre and its presentation, as well as the story of its lengthy development and all around billing as a love letter to video games, Axiom Verge was placed on a pedestal by a lot of the gaming press. I’m not ashamed to admit that I was lumped into that category.

When Axiom Verge finally released, I was ecstatic, and ready to blast through it a handful of times.

A day or three after Axiom Verge released, I realized I wasn’t having fun.

It wasn’t the platforming, or the gunplay. They were serviceable and some of the guns in the game were really cool. It wasn’t the enemy design or the undeniably Metroid setting, either.

Axiom Verge was just mediocre. I didn’t like it for the same reason I don’t like some of the big name alt rock/indie/whatever the hell you want to call it music you hear on the local “cool” radio station: I’ve heard (played) it before and it’s already sounded (played) better. 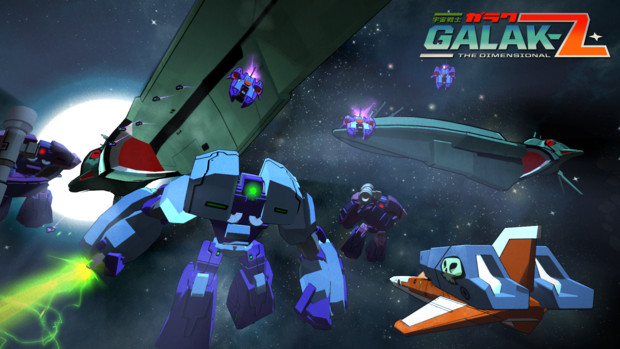 Galak-Z is a similar case to Axiom Verge. Literally everything about that game looks cool as shit. You want a sendup to sci-fi nerdy-ass anime-infused stuff? Of course you do, and it’s called Galak-Z.

The problem with Galak-Z is a lot easier to define than that of Axiom Verge.

This isn’t to say anything about the difficulty of the game, because I really don’t believe that a game being too hard is a problem. You don’t see people complaining that it’s too hard to master high-stakes poker, and you don’t need to bitch and moan that a game is too hard to play. But with Galak-Z, the difficulty is only compounded by the fact that the game’s general flow – the stuff that actually makes up the video game – is inherently flawed.

From a mechanical standpoint, Galak-Z is an interesting little game. The roguelike elements compliment that TV-style season structure and the different skills and utilities for your ship go a long way to make the game feel fleshed out. The problem is that there’s a stupid marriage between concept and practice in the game. The multi-directional thrust is a standout design on paper, but it doesn’t translate as well as it should. The “Juke” skills is kind of bunk and some of the fights in the game are so cluttered that the game’s cumbersome movement is pretty much unbearable.

At least there you can be the robot in it, I guess. 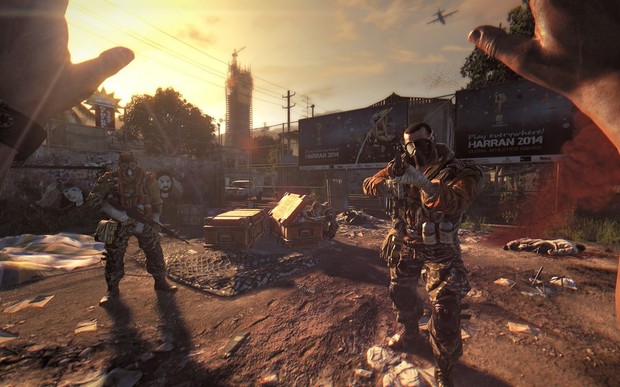 If Mirror’s Edge boned Dark Messiah of Might and Magic and a bunch of other popular games contributed their spunk into the mix, you’d have Dying Light.

With that decent pedigree, Dying Light has a lot going for it. The game did zombies in a way that wasn’t absolutely shitty, and there were a handful of compelling moments thrown in there to make the game seem memorable.

A couple of months after the game came out and I couldn’t tell you a single thing about it other than there was a point early on where a company dropped medical supplies from a plane and I got to them and then I decided to destroy them to keep my super-secret undercover operation intact. Maybe I’m not remembering it right, but that’s not necessarily my fault, because holy shit it was stupid.

Dying Light’s biggest fault was that it did just enough to stand out when it was released, but not enough to really be compelling. You run, you jump, and sometimes you run and jump off of a zombie’s head. You hit shit with wrenches, you make electric hammers, and maybe once in a while you get a gun or two.

In its opening sequence, Dying Light presents itself as a game that couple really have something to say. There’s a notable element of social commentary that made me raise an eyebrow, only to have it be wiped off of my face faster than a zombie after he met my big-dick swinging sledgehammer.

I returned Dying Light a couple of days after picking it up. Kicking zombies can only get you so far in life. 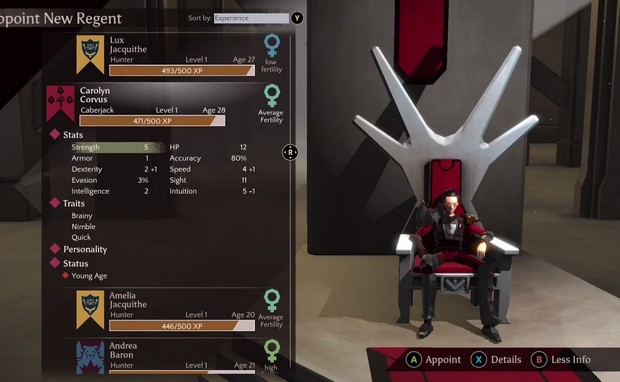 Double Fine’s has gotten a lot of flak in the last year or two thanks to their Kickstarter antics. I think Double Fine is a cool studio.

I also think that Massive Chalice is a game that should be so much better than it is.

The Brad Muir-led, generation-spanning strategy game has one of the best concepts in a long time. You have to guide a kingdom through a war of attrition that lasts a couple hundred years. People live, people die, and people have sex to make more people to live and die and fight.

Massive Chalice has some great writing and interesting art direction. Coupled with some seriously deep management and strategy elements, Massive Chalice had all of the pieces to make an era-defining game.

Massive Chalice was one of the few games that I have ever bought in Early Access. Darkest Dungeon must have spoiled me, because I gleefully threw some money at Massive Chalice as it neared completion. I wanted to guide my kingdom to a tremendous victory that hundreds of brave warriors and advisers had collaborated on. Under my wise tutelage.

Sadly, the game is really boring in all of the places that it shouldn’t be. The game’s battles – what should really feel like culmination of your efforts up until that point – were dry and dragged on for ages (and not in the way that they should).

Because of this, all of the charm and character that Massive Chalice exudes wears off really fast. The writing and the general “Double Fine-ness” of the game is hard to enjoy when you have to slog through stupid long battles. If Psychonauts had shitty combat, Massive Chalice is what it would be like to spend your days on the Event Horizon.

It’s never fun when something you are looking forward to doesn’t pan out, but much like those painful years when the cool toy you have been waiting for appeared under the Christmas Tree and you tore its packaging open, only to realize it was actually sort of dumb once you had it in your hands; video games can be a letdown too.

At least Undertale will always be here.