Those Meddling Kids: 'Trip to Akihabara 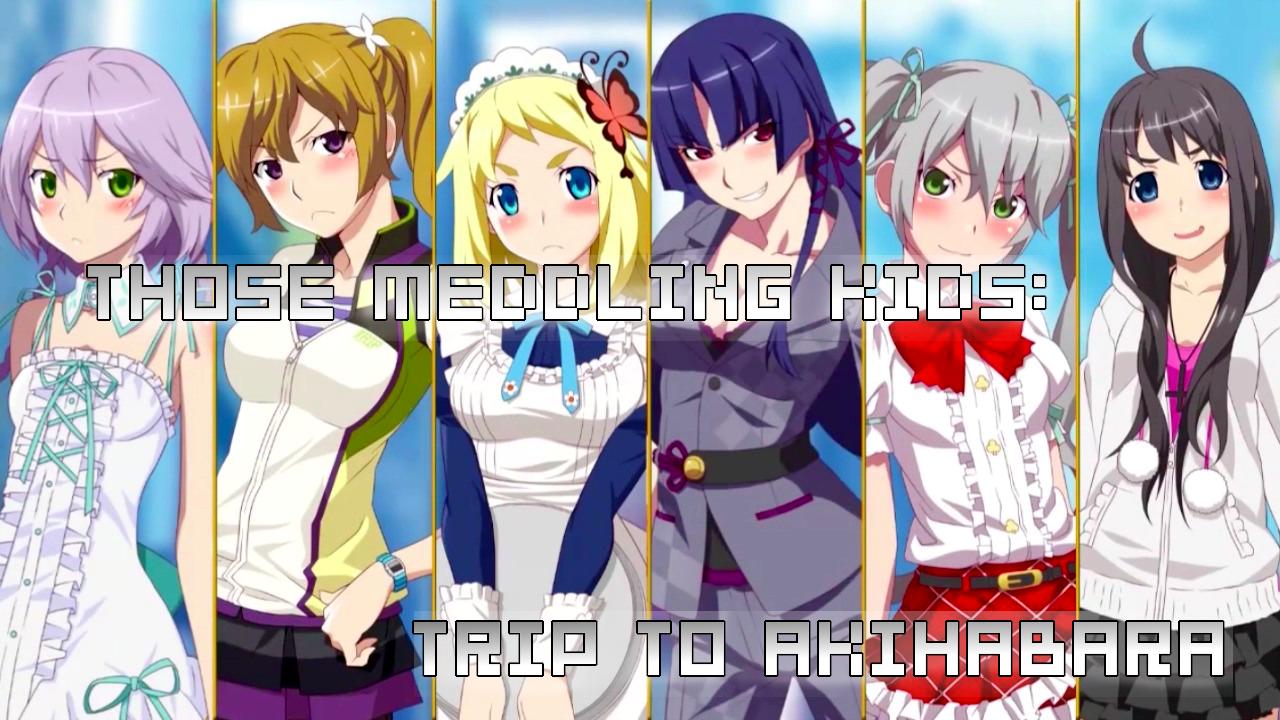 This blog is basically to serve as a form of closure for me and also contribute to the monthly call. Having just beaten Akiba's Trip there is a ton of stuff I want to talk about, including how it relates to the theme this month. So without further ado here is this mixed blog of retrospect/analysis/etc. 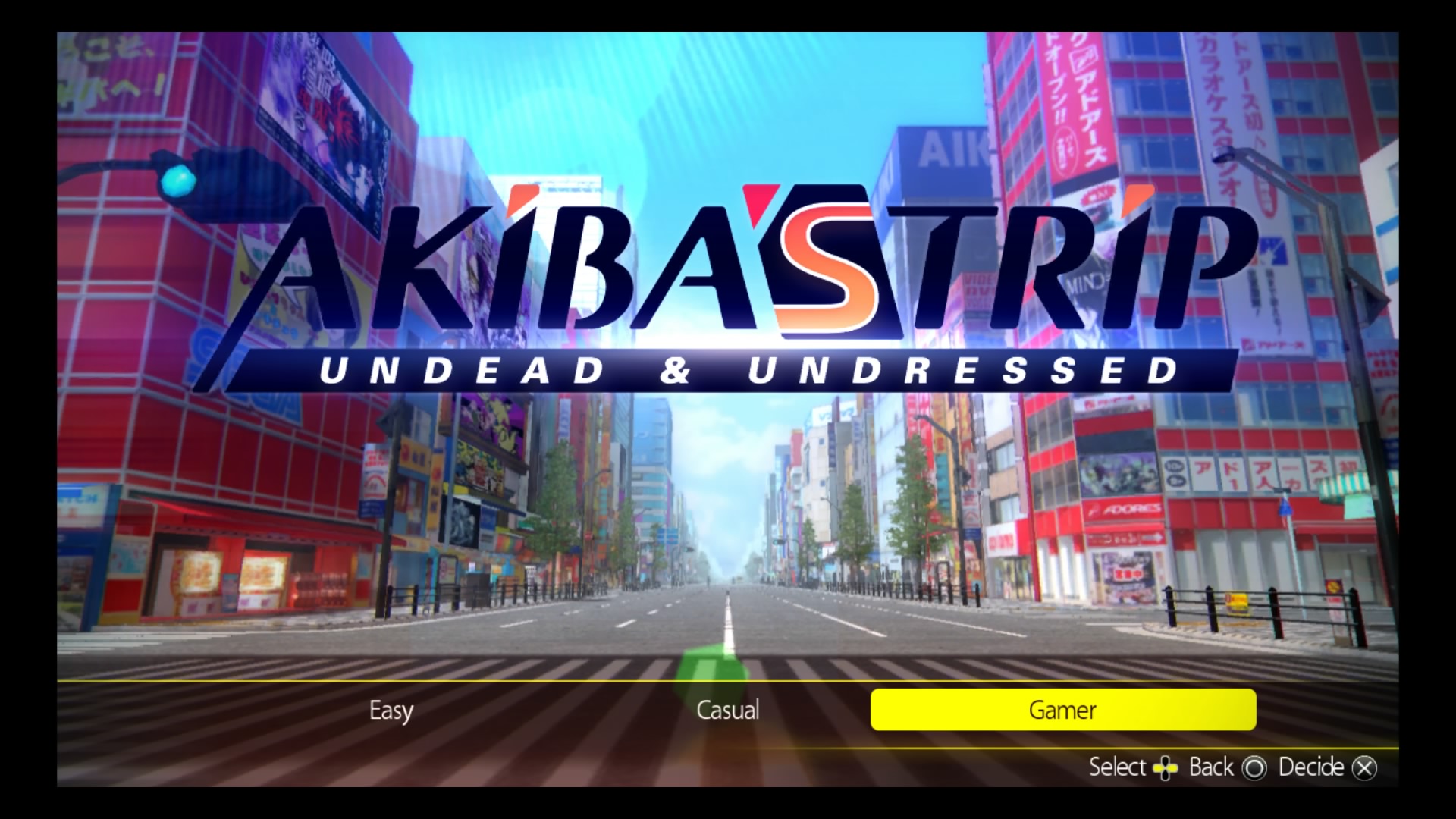 Akiba's Trip is very Japanese and no, not only because you are an otaku running around stripping people because they are vampires and their clothes protected their evil asses from the sunlight, ... in the city of Akihabara, but also because the game has a few things that add to the very intentional JRPG quality of it. Like the emphasis on collectable outfits. You can customize just about everything about your character, hats, shoes, shirts, pants, underwear, accessories, skin tones, face, how they walk and their fighting style. AND you can do that for most of your squad too. Encouraging the player to go out and find hundreds of customizable items. You also get a good amount of side missions and extras that might require multiple playthroughs to get through everything including four difficulty levels. Of the four or five lovely ladies that you fight local Japanese vampirism with, you may get deeper story lines involving them, specifically they get bonus "endings" depending on how you worked and developed with them as you made your way through the game. There is also a dojo and you can rank up your level at least 30 times (according to the trophies) and you can additionally level your weapons and attire by mashing them together with other weapons and attire. So what I've just done is broken down just about everything this game has to offer. It very much has the openness and extra bonus stuff (high tech term I know) of a sandbox game with an awesome story/battle system that you expect from a JRPG.

But how the hell does this game qualify for "those meddling kids"? Well the easy of it is that this is entirely dependent on the story. Much like our childhood loved band of crime fighters, the jock, the prep, the nerd, the hippie and the dog, Akiba's Trip follows the trials and tribulations of a band of Otakus that have found themselves the only ones in town that can save this Japanese city of plastic crap loving, anime/manga devouring, video game playing zombies, from vampires! Also much like Scooby and the Gang the band of friends here were already established and this is just their latest adventure, so it would sort of be like a Scooby Doo cartoon movie where they focus on one bad guy/crime story line as opposed to the episodic flow. 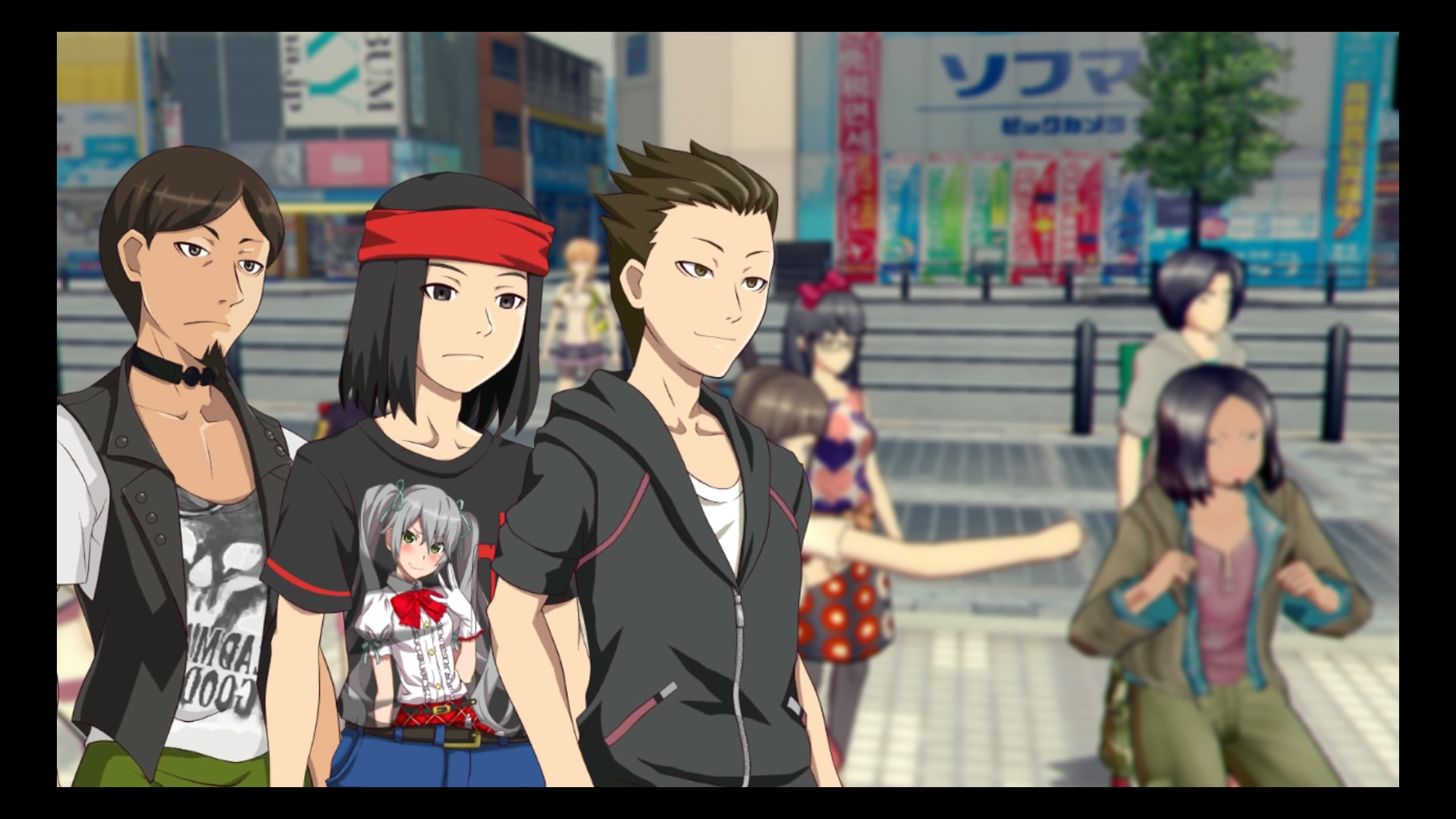 That's right there is an actual plot to take what's already a very bizarre cultural space and plump it full of vampires. And this is only obvious to one group of people, the Akiba Freedom Fighters, aka your protagonist and his friends. Add this as another reason why this game reminds me so much of Durarara, but it gives you that kind of feeling like you're some "inner party" and you know what's going on, you know? And more importantly nobody else does and you see how oblivious the rest of the populous is about you, enjoying their daily lives like the street isn't crawling with bloodsucking hoards of vampires - as an aside, I don't think they really suck your blood. That's totally what the plot of Durarara was about if memory serves me correct. Not the vampires, but the "knowing" more than you should and being in deep for it.

But anyway that is why this game qualifies. There's an evil corporation. You hate them because they're killing your city. There are also multiple players, in and outside of the corporation, who have some control over the situation. They are to be stopped because they all try to do evil and you can't have that. Cue the Scooby Theme!

Now that we have that out of the way, I want to continue to talk about what this game packs in terms of content. You basically get to have one main story and depending on how you play your cards you can get a different path specific to one of the girl sidekicks in this game. As I also found out because I chose "Gamer" difficulty to prove something to nobody and was way too distracted picking my teeth off the sidewalk before the next slobber knocker and thus didn't have time to focus on said story elements: you can get a neutral ending, as evidenced by the trophies. Meaning I didn't get the trophy for the "Tokho" ending despite being closest relationship-wise with Tokho by the time I finished my first playthrough. This game doesn't fuck around, you gotta commit to Tokho - or Rin, or whoever else - to get the story specific ending trophy. Thankfully though the game is good enough that I'm willing to go find that content on my own with new playthroughs instead of just looking them up on youtube like I would for most other games. I'm thinking of modeling each subsequent playthrough with a specific task, like try to get a lot of money, do all the sidequests, collect every outfit, get through this one as fast as possible, difficulty, etc. Basically I'll do something that I haven't done in forever for a game and that's designate this as a get-all-the-trophies-in-due-time kinda game. That's what I've always said about trophies, only if the game justifies the additional playthroughs required, if you truly like the game enough and want more things to do are they a good idea/not a waste of time. And I do like Akiba's Trip.

Actually love might be more appropriate. All those years back when the Gentleman's Club was still a thing and Phil and Spencer debuted this game that I had heard so much about and was only yet available in Japan, I had thought to myself "Wow this game looks like it was made for me, I can't wait to get it. I'll play it immediately." Didn't happen. I didn't even get it immediately. Even though I knew that it would be perfect for me I simply didn't have the time to play it and when it dropped I had to put a mental post it note on it to watch out for a sale just because money was tight. Eventually I got it and then still it was not played, despite how much I knew I should have. It instead went on my backlog list and waited, patiently. And then the moment of truth came, was this game good or would it disappoint? Hell no of course it rocked me. It was badass and exactly as good as I knew it would be too. In fact, the feeling was so intense I felt really guilty about not playing it sooner. Seriously, this game that was so right was just sitting there and I didn't even touch it. And then my mind wandered, what other games could be this dire for me to play next, HuniePop? Omerta: City of Gangsters? Tales of Symphonia? Probably yes to all if this one was any indication. Seriously how often is your intuition about a game being good so spot on? Rarely. Last I recall being Ys. (An aside: having moved on to new games I am finding that yet another game I've put off for  a long time - months - is so heavenly awesome and to my liking, light rays shine from it and it was clearly brought down here from up above for me to play. More on that later!)

But oh yes, sorry meddling kids! I really hate to hijack the community assignment to talk about other things but I don't know too much to say about their interference in villainous plots of Stokerian proportions - seriously even "Umbrella CORP" wasn't this evil or rather SMART. Maybe the one glaring flaw of the game is that the pacing doesn't sit right with me. At least not towards the end. To save you from having what was one of my favorite gaming experiences in recent memory spoiled I'll just say that it felt like the plot was going nowhere for the most part and then the ending just rushed on through like a train conductor realized he had accidently set his watch backwards two hours and floored it. It was both disappointing but alleviated by the fact that I would just play the game again several more times. And also the fan service and how enjoyable playing it was. There really is just so much charm that this game could easily have a christmas list of flaws and I'd still sing its praises.

And now to end on a fun note: This game has a lot of wackiness, interesting bits, funny moments that happen unintentionally and of course loads of fan service (as mentioned) so naturally it is a game you'd want to keep the Share Button lubed up and ready to go. This has to be the most photogenic game I've ever played, in terms of screenshots. I took a lot. And so I  want to take this space to show you my favorite screenshots that I took whilst playing the game. Given that this game is all kinds of wacky and naughty there will be many of them. So many that I've decided to just bulk upload them all to imgur and link it below. Also for anyone curious I had 575 share screenshots taken by the end of this. Yeah I was really into the um... plot development here. Until next time you freedom fighters!

Lastly, it should go without saying but these were taken while I was playing the story mode so

There isn't any really nudity but I'm sure your boss doesn't want you looking at waifu bra and panties matches while you should be doing excel spreadsheets or some shit.

Edit: SO I came back to check the album before uploading the blog and for some reason it uploaded half of the picks I wanted to share and a bunch of others are missing/it uploaded screens I didn't intend to for the album. Oh well I'm not sure how to fix this at this point so will leave the album as is! 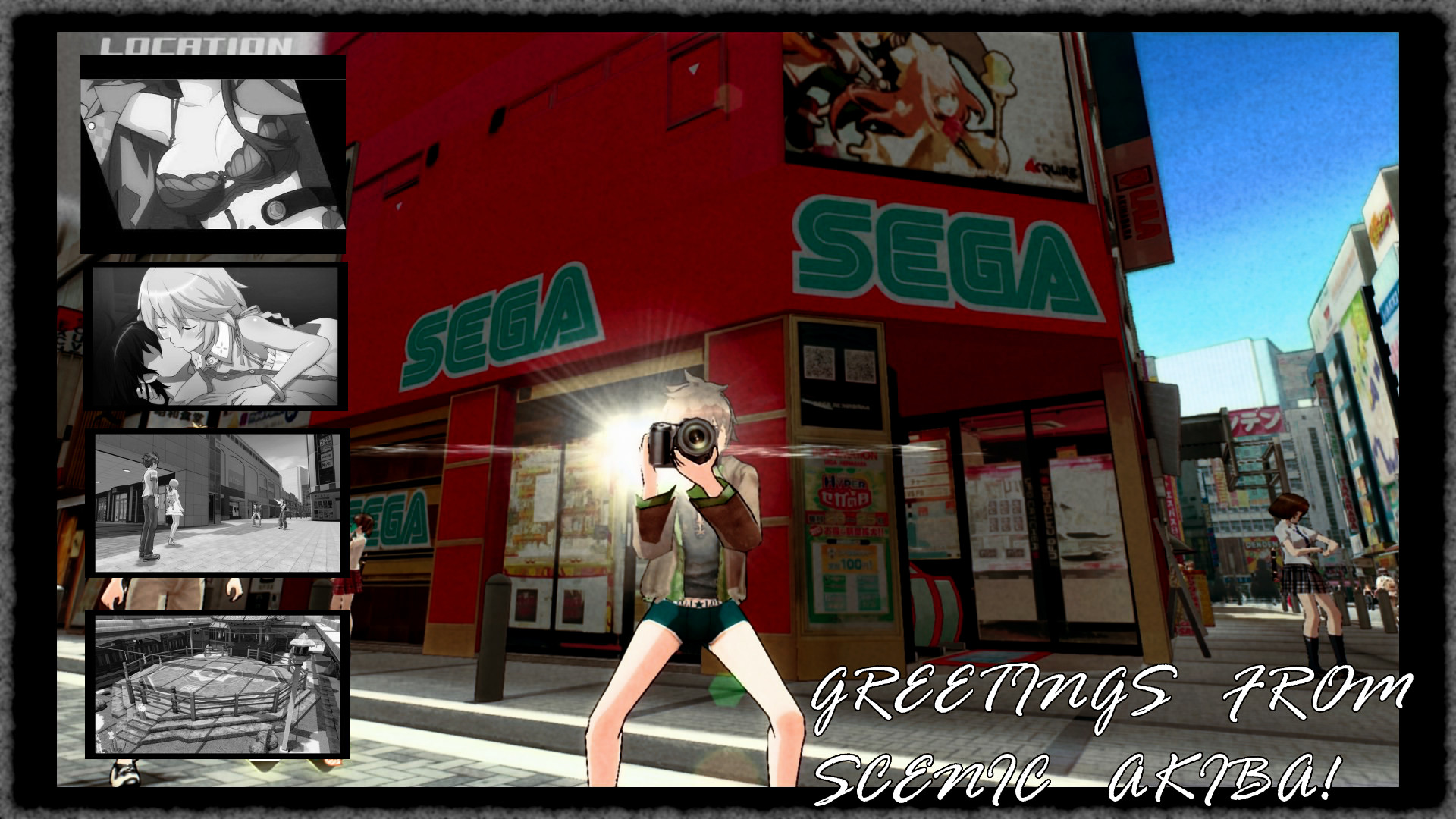