We've Been Outraged Over Amiibo for the Wrong Reason

It's that time again. A new wave of amiibo is here (and long gone) and every time this happens I'm reminded how much I love collecting the characters from Nintendo's history. They're like real life Smash trophies! But I'm also reminded how bullshit the whole thing is.

With amiibo, Nintendo has done something wonderful and terrible at the same time. On the one hand, they're selling like hotcakes which is great for the company. On the other hand, they're selling out like hotcakes which is bad for consumers. But gamers seem to have the wrong idea about why this is bad. Sure, it's fun to collect all the little plastic toys spanning Nintendo's history. They even managed to get me into it. I mean, when else are they ever going to make figures of characters like Captain Falcon, Little Mac, or Duck Hunt Dog? Never, that's when. But we've all been so preoccupied with collecting these things that we've forgotten what they really are: DLC.

Now, let me first say that with Nintendo's crappy online system, using little figures for DLC is actually kind of smart. If you had downloaded this stuff to your system and your system breaks, then, poof, gone forever! But having to scan a physical item that you can keep on your shelf means you own that content forever with no need to worry if you can download it again or not. And I have to give Nintendo props for making their figures cross-game compatible. Even if they try to squeeze extra money out of collectors by creating 20 different Marios, they all do the same thing in the end so you really only need one.

But Mario is a bad example because he's common. You can walk into any old store that sells video games and buy a Mario amiibo or five. But what if you want to use Marth in Code Name STEAM? Too damn bad, because there aren't any! The more sophisticated the amiibo functionality gets, the more problematic this is. Want to do the Splatoon challenges but can't find the amiibo? You're now missing out on that forever. Although creating this DLC content in toy form seems like an interesting, fun idea, it literally limits the number of people that can experience that content. What if Splatoon had a downloadable challenge mode, and you could go on the eShop and purchase that content to add to your game? Then anyone who wanted it could get it and, as a bonus, buyers of the amiibo could get it for free with the figure. But that would mean amiibo are mostly collectables, and Nintendo has to justify their game functionality somehow. 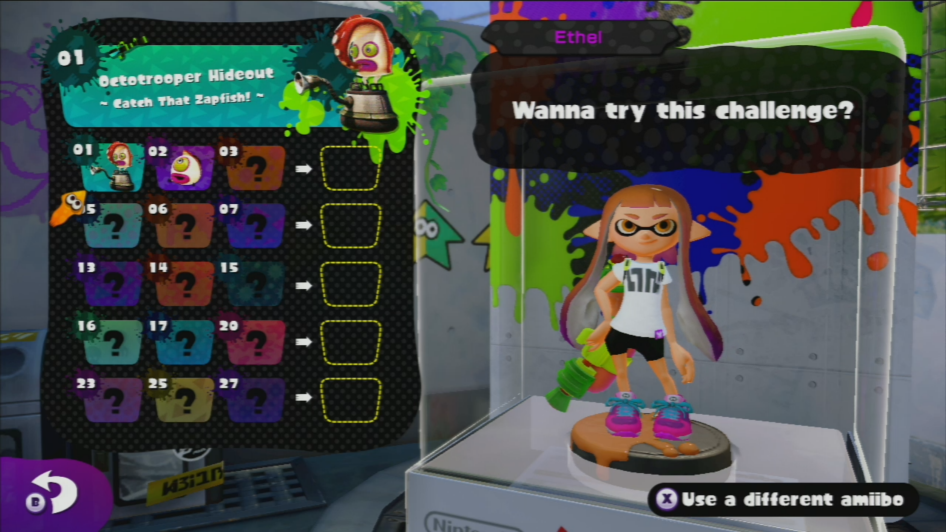 Are you okay with missing all this or does it not matter to you?

Creating DLC scarcity isn't even the worst part, though. Have you ever taken a moment to realize exactly what Nintendo is doing here? Amiibo aren't adding content to your game, they're unlocking it. Nothing downloads when you scan an amiibo, which means the figures basically act as a key that unlocks something that's already in the game but inaccessible otherwise. This wasn't a huge deal in the beginning. Figure players in Smash are a neat bonus, but you're not missing anything crucial without them. Many games use amiibo to unlock small bonuses like costumes or powerups, which seems fair to me if you happen to own the figure in your collection.

But lately, Nintendo's been making the content more substantial. There's an entire mode in Mario Party 10 that's inaccessible if you don't own a Super Mario amiibo. To be fair, there was an amiibo bundle for that game, but the one amiibo it came with only unlocks a single board to play on. Want more? Then you need more amiibo. Then there's Code Name STEAM (and now Fire Emblem Fates) which includes unlockable Fire Emblem characters only if you scan their amiibo. They might as well not have even bothered with that, because you probably have a better chance of getting crushed by a vending machine than finding a Fire Emblem amiibo at retail price. Splatoon has done the same thing. There are 60 challenge stages, three mini-games, and three armor sets that you can only get if you scan the amiibo. To reiterate, these are all things that were built into the games from the start, but are only accessible if you have the proper amiibo to scan.

This would be bad enough if Nintendo was trying to charge us for this stuff on the eShop, but at least that way anyone could unlock the content if they wanted. But to have on-disk DLC and to have it only accessible to a privileged few is absolutely ridiculous. What is is about Nintendo that we're letting them have a pass on this? When companies like Capcom do this, the gaming community flips out. But it's somehow okay if Nintendo locks content behind a paywall? If you actually, legitimately wanted to unlock amiibo content in your Nintendo game, you'll more than likely either pay at least twice as much for it or just give up entirely and miss out on a chunk of the game that is on the disk that you paid for. And let’s not forget that the normal MSRP for amiibo is always $13 regardless of how much or how little functionality the figure has. Sometimes $13 gets you a costume, sometimes it gets you a playable character, and sometimes it gets you 20 challenge stages, gear, and a minigame. And adding all the missing content to a game is $13 per bit at MSRP alone, which can get stupid expensive.

And there seems to be no rhyme or reason behind what Nitnendo makes paid DLC and what they make unlockable paywall content. Nintendo released Splatoon Mii costumes in Smash Bros as DLC not too long ago. But why can't I unlock this for free if I scan my Splatoon amiibo? Isn't that the least they could do for screwing me out of $35 of content in Splatoon?

At the end of the day, Nintendo's amiibo are just a hot mess. They're treated as collectables by most fans and maybe that's what they should be. Using them as a tool to block game content is not like Nitnendo at all. It's something the old Nintendo, a company known for always releasing complete experiences, would never have done. But I guess we live in a new age now. An age where Nintendo sells its games in chunks just like the competition, only Nintendo's done it in such a way that most gamers will never be able to play a complete game again. Their incompetence in providing enough stock of certain figures has been baffling, and their decision to make certain figures retail exclusive is even more baffling. Why would they turn amiibo into something that's becoming necessary to experience an entire game but then not making them accessable to everyone? If this shitty practice of on-disk DLC must continue, Nintendo should at least make content for games like Code Name STEAM, Mario Party 10, and Splatoon downloadable on the eShop as well. There's no reason we should be ignoring this or excusing it. Why aren't we outraged for the right reasons?

Then again, I am one of the chumps supporting this nonsense…

I have so many amiibo that I am literally out of space for them. I can't even tell the time any more!

So what do you think about the future of amiibo? Should they be collectables with neat bonuses or does Nintendo need to justify them by including more substantial content? How do you feel about 3rd parties like Yacht Club following Nintendo's model? Should there be more games that require amiibo to play like Animal Crossing: Amiibo Festival (which, by the way, is a free download)? Does Mario Maker do it right by having amiibo costumes unlockable too? Will I ever stop asking questions?