Mario Maker: An Artbook Surprise & Impressions from a Lost-Hazy Weekend

I honestly thought Super Mario Maker would be something i'd have a bash on here and there, but not get overly into. As it stands i've done little else this weekend but play the bloody thing and there's a monstrous Kraken-Rum bottle in the kitchen - nearly empty. The perfectionism and obsession to detail that haunts my worklife (i'm not a writer, so no japes there please) was not put to rest this weekend. I've barely been able to stop messing around with this thing. Saying that, i've barely been unable to stop thinking about it. This is not a game. It's a lifestyle choice.

The nicest surprise was an art-book that comes with the game. I had no idea about this thing until I opened the case and was beaming my face off as I turned every page. It's a very very special thing. I would honestly have paid good money for this book if I had seen it in a shop. No questions asked. Plonk. This book is a testament to the deep respect Nintendo have for their IPs and their most beloved mascott. It's the kind of thing i'd have imagined being in a premium-price special edition of the game, but here it comes with the standard version.. and even more amazingly Nintendo don't seem to be touting it? At least not that I know of?

Well. It looks like someone at Nintendo's UI department has had a peek of Google's Material Design document. The old shiny/sweaty web 2.0 buttons and interface seems to have been kicked out (hallelujah) for something more tactile and focussed. Let's hope this is the new visual standard for Nitendo's interfaces.. as this really looks the part. There's some experience crinkles here and there, but overall it's a superb job. What could have been a straightforward level designer drips charm and eccentricity at every turn. Nintendo have injected as much of their special brand of personality into this level editor as they did with splatoon and the Multiplayer shooter. It's bonkers and that's all you really need to know until you play it.

The concept of this game is simple and a lot like Twitter. Instead of posting tweets you think are great, clever and important - you post levels you think are great, clever and important. Though they're mostly (but not always) fairly shite. The first thing you'll likely do is play other people's levels and you'll be spoilt for choice on gimmicky unfair ones. Ones where you're thrown into a situation and have a frame of a second to react to something (that you couldn't have possibly known was coming) and are punished for you lack of clairvoyance by insta-death or being unable to progress in the level.

And there-in lies the genius. The compulsion/the long-game. In your arrogance you feel yourself being pulled into the rescue. Only you will be able to rectify this sorry state of affairs. You'll show them how it's done. You'll show them: the truth, the light and the secret to everlasting level design. However, what really happens is you create a mild stinker which in turn arouses another band of disparate global heroes - who in turn crank out their shite into the ever turning stinking wheel of misery.

...And i'm not really being fair. There are some nice levels and there are some really funny surreal levels, which isn't the same thing, but is still fun. This is punk Mario. This is Nintendo's version of the iconic Sniffing Glue cover but with colourful blocks, fluffy clouds and Goombas. People are getting some of the gimmickery out of their system, which isn't helped by the unlock process being sped up by how many assets you use. I think we'll start to see some really wonderful work when people get the hang of this. 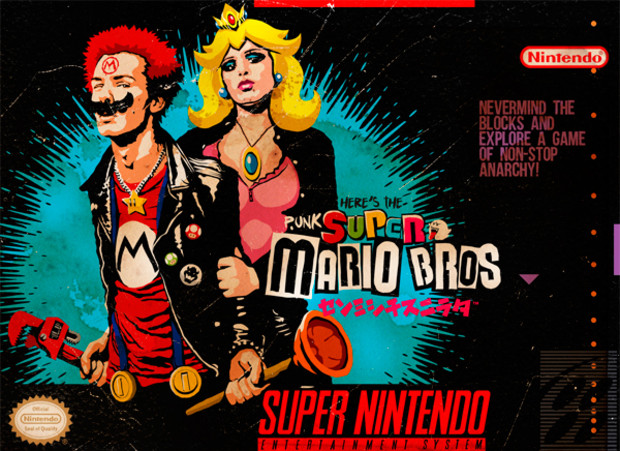 And of course here's my contribution. Super-Sneak: Tunnel-Bank-Break-In. I made a level where you have to break into the headquarters of HSBC and steal all the money out of their vaults (A once-dream of mine). Because that's where major banks keep all of their money of course - in vaults at their headquarters. Amongst other creations that will never see the light of day - this is the fruits of a weekend's work and a liver-torture regiment. I tried to to make it as fair and logical as possible - it only uses a few simple assets and hones in on a simple idea. It's a start.

Let me know what you think and please feel free to share your levels. I'll give them a go.