The Most Memorable Moments from PAX 2015

Behold! My most memorable moments from my trip to PAX 2015! I actually stayed for a week, but I focused mostly on PAX-related stuff for this list. Except for a special surprise at the end...

Microsoft held an indie game event the night before PAX and it was more than worth the nothing I paid to get in! They bussed folks to the Microsoft campus in Redmond for free, gave out unlimited free pizza, snacks, and drinks, had tons of games to play for a good four hours, and I got to meet Cuphead. After it was over they had a bus running straight to Nintendo’s Nindies at Night event at the EMP museum which I thought was a really great gesture.

Eating breakfast at the Middle of the Road Diner™

And when I say “middle of the road” I don’t mean it’s mediocre, I mean it’s literally surrounded on all sides by roads. It was right down the street from the convention center, but not crowded at all. And the food rocked! They had sandwiches, burgers, and crepes. I went back three times!

Being disappointed the moment I walked onto the showfloor

The first morning is always stupidly packed with people who all want to funnel in at the same time, so I suggested to my friend we go in through the annex back door. It was completely empty (of course) and took us straight up to the 4th floor behind the Bethesda booth. And that’s when I saw it: DOOM. I was pretty damn excited to play Doom, so we got in line immediately. I told him to save my spot so I could see how long it wrapped around. It wasn’t too long but it also wasn't a game. It was a stupid picture op! In fact, so was the entire Bethesda booth! They had what was probably the best lineup at the show and brought exactly zero games with them. So the show started off on a sour note, but there was still plenty of fun to be had.

Getting the high score in Dust Hunt 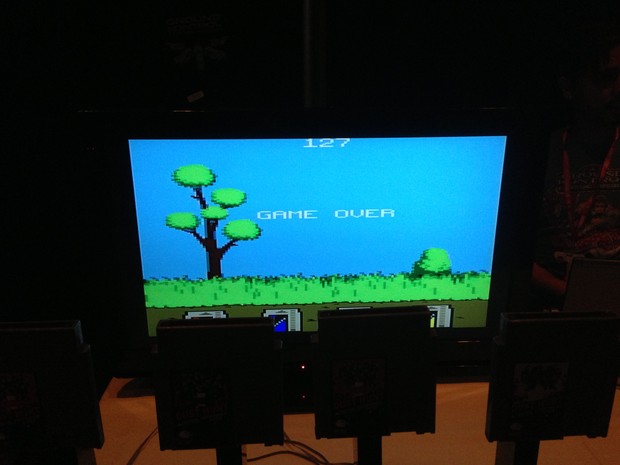 The 6th floor arcade had a custom game called “Dust Hunt” where you had to blow into cartridges to keep dust particles from falling into them. The guy at the booth said the highest score he’d seen all day was 101, so I took the challenge and scored 127. Even though I almost passed out and my arms fell asleep, it was still a proud moment for me. Of course, this was on the first day so somebody probably beat it eventually.

I waited in line for a little while to play Hyper Light drifter only to end up crashing the game. I was almost to the boss room, when suddenly the picture completely died and only sound remained. Beau Blyth had to come out and fix it and then I got to watch him speedrun through the stage to the boss room. Then I got my ass kicked by the boss and gave up.

He was about 10 years old and probably better than all of us.

Cliffy B hanging at the Meat Boy booth

I saw Cliffy B Clifford Bleszinski chilling with Tommy and Shanon Refenes at the Team Meat booth. Gotta get that indie cred, yo! On a related note, Super Meat Boy Forever is damn near impossible. On the demo unit I tried, nobody had gotten past the second level.

The unintentionally crappy quality makes it even better.

Playing Sewer Shark for the Sega CD was a once in a lifetime experience. And by that I mean I only want to do it once in my life.

The arcade version of Narc, on the other hand, was a ridiculous blast.

The dude advertising his game in line

The award for the smartest developer at PAX was a guy standing in the Halo 5 line with a tv strapped to his chest. He let people play his game while they waited to play another game which is quite honestly the best way to get people to play your game.

The first PAX I ever attended was in 2011. Back then you’d walk around the showfloor and people would literally shove stuff in your face. I have stacks of posters, beta codes, stupid avatar clothing, stickers, and random junk like sunglasses, bottle openers, hats, foam fingers, and water bladders. It’s been a few years since I’ve been and I was a bit surprised to find that now you have to play stuff to get stuff. But, damn, that stuff is way better. The free Battleborn shirt I got is the kind of thing I’d actually pay money for, and the Halo 5 poster is actually the highest quality poster I’ve ever owned in my life.

A team of two complete strangers who met Friday morning registered for the Rocket League doubles tournament and made it to the penultimate day’s finals. It was magic to watch.

One of the things I really wanted to check out at PAX was virtual reality. Of course, the Oculus booth was comically crowded and the Morpheus booth had some kind of preregistration thing before you could get in line. But stuffed in a corner next to the Fangamer booth were a couple of VR games from Uber that nobody was playing for some reason.

The first was the Planetary Annihilation: Titans Experience. It was running on the HTC Vive which looked like something out of a mad scientist’s laboratory. It required me to be strapped into a crazy harness contraption that had wires hanging out everwhere and I’m pretty sure it was held together with duct tape. The demo itself was pretty simple. I stood on a small platform while an army of robot tanks marched around me, and I could bend down to pick up and throw these exploding robot spider things. It wasn’t super involved but holy hell was it engaging. This thing right here singlehandedly sold me on VR as I watched a giant mech pass over me. I mean, I was there in that robot war! The resolution of this thing was just incredible!

The other game I played was Wayward Sky for the Morpheus which was described as a “look and click” adventure game. The premise was actually pretty neat in that you had an overhead view and could literally look around your environment and use the goofy Move wand to point at stuff and make your character interact. Sometimes it would swap to a first person view so you could control your little guy’s hand to solve puzzles. It was a neat game but I don’t think it really gained anything by being in VR. It just made the game more immersive in the way that playing a 3DS game with the 3D on is cool but unnecessary. Also, while the hardware looked ready to ship, the screens were obviously not finished. Pixels everwhere!

The Behemoth doesn’t just bring their games to PAX, they bring an experience. Playing Pit People was probably one of the most unique things I did this year. The crazy cow stools were one thing, but the controls were the best part. I especially loved pulling the giant Y lever to finish my turn. Have you ever heard of Zarvot? Now you have. You can thank me later. Zarvot is four player voxel annihilation and playing it with random strangers was the best time I had at PAX. Well, that and Duck Game, but everybody knows duck game.

Yep, definitely the best thing I saw in Seattle.