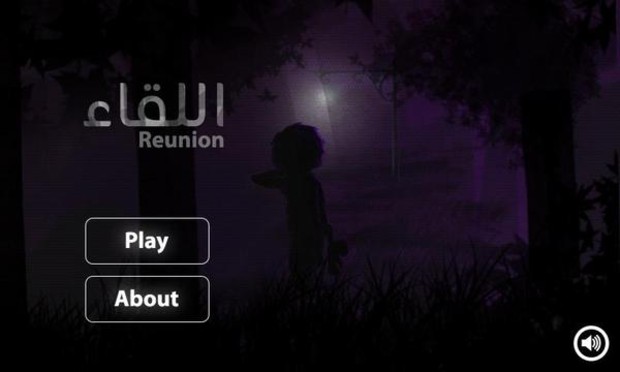 Horror games are a genre that I really have yet to jump into, having never played games such as Silent Hill or Resident Evil. I have a very particular taste in horror, one that simple unsettles me at my core, just shifting everything just off enough for it to bother or alarm me. I somewhat had this feeling walking around the Sierra Madre in Fallout: New Vegas' add-on: Dead Money. The red sky, the abandoned streets, the many different threats, the background music, and almost everything else worked together to create something that truly ended up under my skin to walk around. And I love all of this.

Reunion is a short but sweet mobile game all about you, a father, trying to find your son in a forest at night after he up and ran away. Going through the woods you can run into some stuff, but it's all worth it for your kid, right? It can be scary, but you got to find your kid, right? He ran away of his own will but he's just a child, so he should be found, right? 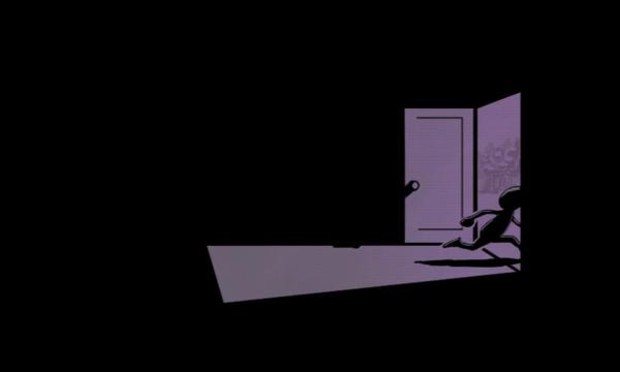 Utilizing the top-down perspective, you do nothing but run around and call for you son, which temporarily points an arrow as to where you should be heading to. It' simple but works well with a few other mechanics within the game. For starters, similar to Pokemon when you're in a cave that needs flash before it's fully illuminated, you only have a circle of stuff you can see around you. That, plus the fact that all the things that are out to get poor old you are placed in just the right spots to trip you into them, can lead to a lot of stumbling around, as if you were actually in the woods in the dead of night trying to find someone.

The main problem with all of this stumbling around is how it can lead to a bit of trial and error. When you run into something and get a little sort of jump-scare, you're reset back to the last checkpoint, which are in the form of Danger signs posted on a tree every so often. It's not too bad but at times it can be really easy to get ahead of yourself and get too close to something before realizing it. You're never sent back too terribly far and checkpoints are frequent enough, so it's not hard to get back to where you got tripped up, which is good.

Reunion is a horror game, right? Well, what would any horror game be without some scary things to freak you out? This game does jump-scares right in my eyes, and that's a scary enough thing for me.  Instead of anything actually jumping out at you, the camera jumps from the player character to whatever the player got too close to, jarring the perspective with a booming piece of sound that is designed to shake you. Nothing really moves except the player when they walk into things. It's that moment when you're in the middle of walking in the dark and you can suddenly focus and see something dangerous that you've stumbled awfully close to. It's thrilling. 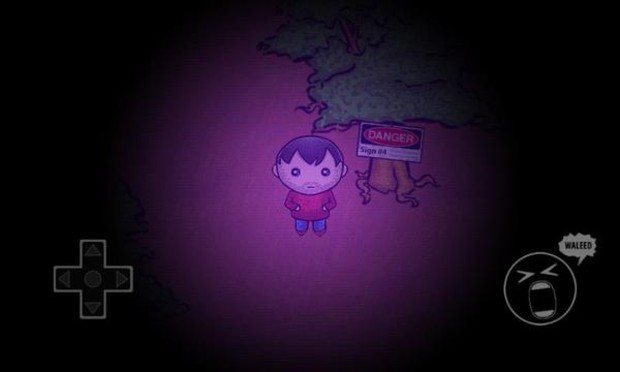 The visuals are nice. The player character sprite looks almost from South Park, and everything else are a bunch of decent hand-drawn sprites themselves. Animations are solid and smooth enough, although really the only animation is the player character's walk cycle. The player character himself looks very rugged. You can just see it in his eyes and scruffy beard. Everything has a sort of purple hue to it, helping to give the whole game a certain type of atmosphere that works well with the fact that most of the screen is black while you're playing. It's a horror game, so atmosphere is everything.

Sound design is actually a big part in this game, as it should be in every horror game. The music is an emotional orchestral loop that, while fitting in with the atmosphere and certainly adding to it, isn't too prominent and thus lets the sound design itself to shine. It's suggested that you use earbuds or headphones when playing so you can listen to everything a lot better. You get to hear your heartbeat pound in your ear, the slithering of snakes, and even noises that can't be explained. It's pretty nerve-racking but not only does it add to the horror but because the only real way to tell how close you are to something is through what sound they make and how loud it is, the sound is vital to playing. 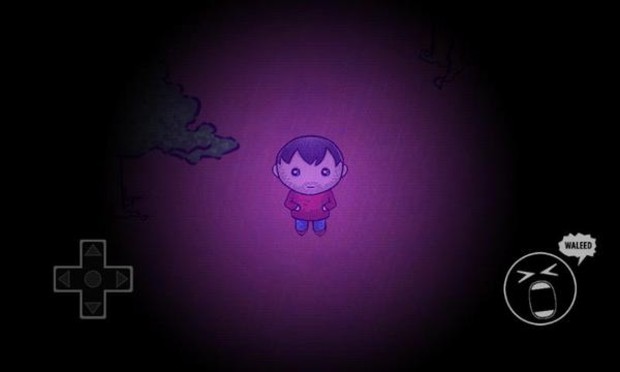 Now I don't want to ruin anyone's experience, so if you plan on playing this game check it out here (https://play.google.com/store/apps/details?id=com.HakoGames.AlLeka&hl=en). Well, if you're still reading here are some spoilers. Not all of the spoilers, but some. The whole game ends as a PSA about mental illness and schizophrenia. This explains why you see some of the things that you see, or the things that you do, or maybe why your son ran away. Speaking of which, who's to say he is your son? Snap son, you could just be a random guy! It's weird to think about, but it works well in my opinion.

Well although it's a PSA, Reunion is a solid horror game for the short time that it lasts. It's worth the small amount of time it takes to play it through just to see the ending, which caught me off guard. It sparked my interest in the horror genre and after picking up Lone Survivor I might be giving that a try soon. Wish me luck!