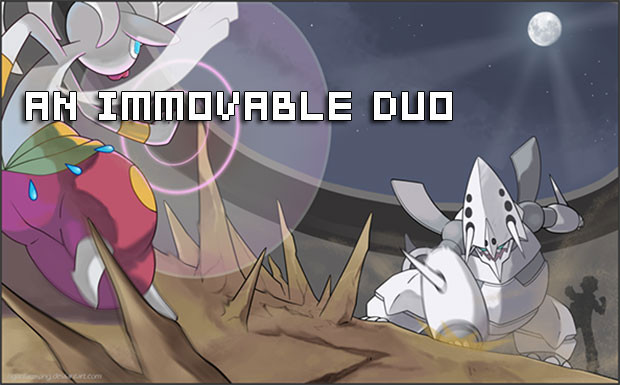 The metagame for Pokemon is extremely large. And as such finding a challenger to battle can lead to any number of varied experiences. Even if you fight against tier hogs who adhere to the strictest idea of playing with tryhard pants on, the tier list for viable Pokemon across the OverUsed tier is as long as a guest list to a private party being held by Kojima. I've battled against a team of poorly trained and mismatched legendaries, team composed entirely of deadly sweepers, teams with a deadly mega of some sort being supported by a gaggle of deadly walls with crippling hazard setters and status spreaders, and everything in between holding choice bands and priority moves. I myself, as a battling trainer, got addicted to hundreds of hours of training devoted to created a vast and varied stable of battle ready Pokemon, ranging from niche (suicide web Galvantula), to gimmicky (a sun team with Mega Houndoom and Harvest Trevenant), to break neck pace strategies (dual Intimidate Mega Manectric and Staraptor spamming U-Turn and Volt Switch).

But eventually you gotta settle on a favorite. A team that you will use when you just don't know what to expect and this personal choice will get you relatively through any problem with satisfactory results. It had to be unexpected, to throw off my opponent. It also had to incorporate a Pokemon I actually liked, but was still relatively viable. This is what a core is in Pokemon battling: a specific pairing or even group of Pokemon who go together like peanut butter and jelly because their strengths cover their weaknesses but also enhance each other. So how was I going to make Mega Aggron, one of my favorite Pokemon ever to receive a buff with a mega evolution, viable when his greatest strength was hampered by the very thing that enabled him to be so much better than what he used to be? Mega Aggron's defense is ludicrious, capable of shrugging off STAB Earthquake from the likes of Gliscor and Garchomp, who are by the way if you don't know, some of the most powerful users of Earthquake and Mega Aggron is a steel-type, which is weak to ground-type attacks. Normally you hear weak and you think you'd immediately switch him out of fear but Mega Aggron's defense is so high, not to mention it has Filter as an ability to changes super effective hits from 2x effective to 1.5x effective, that he basically has nothing to fear on the physical spectrum of attacks. But of course his special defense is mediocre but his biggest weakness is the fact that since mega evolution requires a mega stone, he can't hold Leftovers for passive recovery. Using up move slots for Rest seems like a waste if it doesn't immediately pigeonhole him into certain move sets. So Aggron got a flaw buff, so what's a fan of Aggron gotta do to make his favorite metal rhino shine like the chrome superstar he deserves to be? 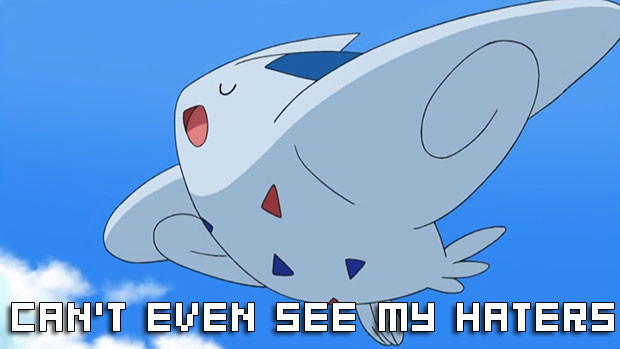 Pair him with another favorite of mine, sometimes referred to as the Jerkass Dove, Togekiss. The two couldn't be more different and yet their differences make them perfect for each other on the battlefield. My own personal core of TogeAggron becomes an nigh unstoppable wall of pain. It isn't just a wall that takes hits. This is a wall that sprouts arms and punches back with boxing gloves made of cinder blocks.

Togekiss is opposite of Aggron in terms of stat composition and typing. Togekiss is a bundle of special defense and special attack that will laugh off your attempts to use Dark Pulse, Flamethrower, Psychic, whatever fancy attack it is and smack you back with Dazzling Gleam, a fairy-type attack that reminds you that the retconning of the Togepi line into fairy-type was an immensely powerful change for it. Togekiss however, fears rock-type attacks, and it doesn't have the defense to take things like Flare Blitz with a straight face. You know who is absolutely fine with taking Flare Blitz to the face?

That's not why I paired Togekiss with Mega Aggron like rubbing two of my action figures together to make them kiss though. Togekiss has immense survivability but not on an epic scale like Mega Aggron. Togekiss however can hold Leftovers and can learn Wish, a move that restores half health after one turn. Togekiss doesn't have longevity from shrugging off attacks but because it can take damage like a champ but recover that health in a jiffy. But Togekiss doesn't have to just heal itself. Wish works for anything that switches places with it on the next turn. And there you have the crux of my favorite core.

Cores can be pretty scary. This is a fusion though.

This core is built to take some of the metagame's most popular offensive types and just laugh at them while saying, "What metagame?" Choice banders like Azumarril and Talonflame can't even dream of making Mega Aggron yawn. Mega Blaziken, destroyer of worlds, might be able to break even against the solid steel of Mega Aggron but Aggron has Earthquake to extinguish Mega Blaziken's flames. But what if Mega Charizard Y steps out for Flamethrower or perhaps Greninja is stepping in with specially offensive Protean boosts? Togekiss steps in, Wish/Protects that health back, and simply wails away with Dazzling Gleam supported by Leftovers. But a steel-type like Aegislash wants to Iron Head poor Togekiss, or maybe the poisonous sea dragon, Dragalge? Not only can Mega Aggron just scare them off, Togekiss has a chance to pass a Wish onto the battered and beaten but not out Mega Aggron.

The complete set for Togekiss is Dazzling Gleam/Air Slash/Wish/Protect while Mega Aggron has Stealth Rocks/Thunder Wave/Earthquake/Heavy Slam. Yup, between the two of them there are only four attacks and one of them is dependent on the weight of the opponent to do more or less damage. But between Leftovers recovery and Wish passing keeping these walls healthy while continually dishing out a slow and steady pace of broad damage, opponents will be tempted to switch to a counter, risking Stealth Rocks damage and paralysis being spread around faster than an STD in a college dorm.

Playing Pokemon is sometimes about doing as much damage as possible as fast as possible before your opponent can regain their composure. This core appeals to me though because you can't expect to do OHKOs to everything in the game and have plan for afterwards. Between Togekiss and Mega Aggron though, I can expect to survive a lot of damage and slowly grind down my opposition between reliable attacks and Stealth Rocks damage. These two couldn't be more different but together, they can take on a lot of heat that neither one of them could deal with individually. This is what Pokemon is all about; building a team that supports each other rather than building a team that hands the spotlight to one superstar sweeper. I love this core to death because its effective, it's unexpected, and it can really frustrate an opponent who slowly realizes that their most effective offense may only be able to do 1/3 of a health bar which can easily be recovered in two turns. 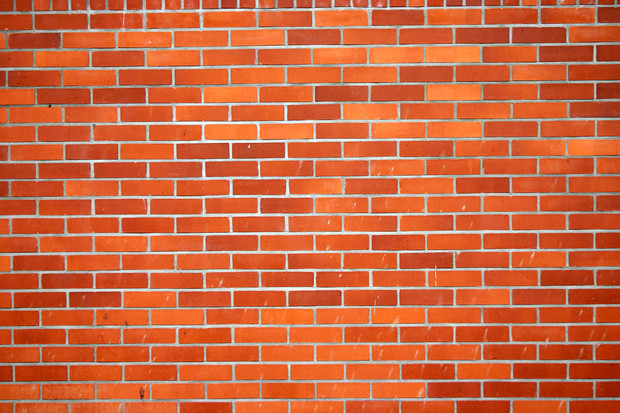 Hard to break down, but it'll hurt you in the process. See? A wall.