Challengers Wanted: My Favorite Turian on the Citadel 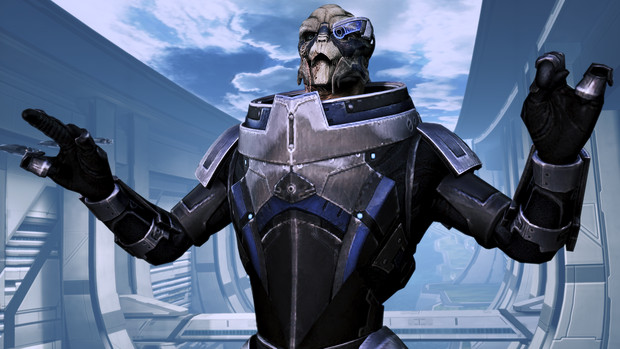 The Mass Effect trilogy is something rather special, a series in which all the great things (and not so great things) about gaming can be found. Great dialogue, outstanding sound design, shitty DLC practices. Each of the games is a flawed gem, each striving for perfection but just falling short. ME 1’s UI and general clunkiness, 2’s lackluster weaponry, 3’s pitiful attempts to appeal to the ‘mass market’ at the expense of pretty much everything that made these games great. And it’s ending. There is, however, one person that is flawless throughout: Garrus.

Garrus acts like the voice of the game, and his journey always matches yours. Neither Shepard or Garrus can be summed up as a trope, and whilst Bioware always does tropes pretty well (Zaeed is my favorite as the gruff mercenary), Garrus is a welcome break. Almost all of the trilogy’s characters can be broken down into simple characteristics. Miranda the perfectionist. Mordin the mad scientist. Jacob the generic soldier #4. But ‘disgruntled ex-cop’ doesn’t cut it with Garrus. For all his desire to do good he still wants to put a bullet in Sidonis' skull. He'll always do what he thinks must be done - even if it means killing a friend of Shepard and regretting it in one of his many heartfelt chats. He’s complex, far more complex than any other character – perhaps more so than the player. Garrus is a disgruntled ex-cop, but he’s also a vigilante, a soldier and most of all – he is a friend. 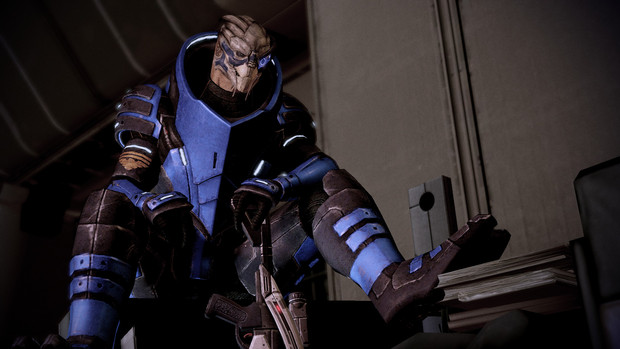 As Shepard’s friend he also acts as to set the tone of each game. The first Mass Effect is about disregarding the rules, and getting the job done – both strong desires of the Turian. ME 2 is about getting things done yourself against impossible odds, it is no wonder that when we first meet Garrus in ME 2 we find him on his own, pinned into a building, taking on three gangs at once. The third is about defeating the Reapers, and both the game and Garrus are dead set on that objective. He is a beacon toward what the game wants – the voice of the designers, if you like.

There is another bonus to Garrus as the friend of the player – it drags the game toward a more unified experience. People can disagree on whether Miranda is a good companion or a whiny waste of office space. People can argue about whether Kaiden is actually a good character or not (I liked him), but almost every player of Mass Effect agrees that Garrus is awesome. The player and Garrus are a team – there’s no Shepard without Vakarian. 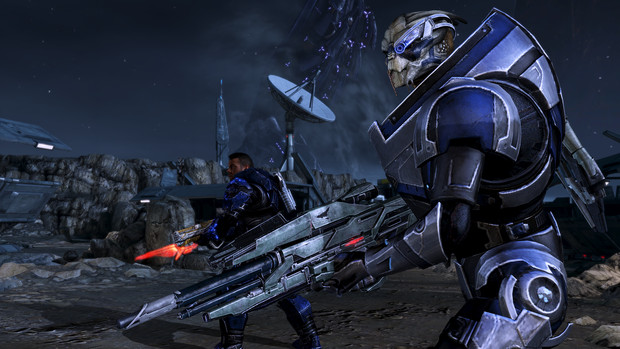 Garrus also serves to lighten the mood in an otherwise rather serious game. Whilst your companions contemplate their lives aboard the Citadel, Garrus is happy to go up to the walkways and have a shooting contest. So many aspects of ME 3 are depressing, but Garrus is always there to put the player back on track, a role that is very well complimented by Joker’s aloofness and sudden seriousness at the end of the game. All characters, for all their silliness, become dead serious on Earth. Wrex is macho as ever, EDI shows the conviction expected of a robot, but it is Garrus that properly motivates the player – telling the player to go out there and give them hell. And to meet him at Heaven’s bar. His is the speech that both brings home that the Reapers will fall, but that you may die in the process.

Then there is the fact that Garrus’ character changes more than any other, only Mordin gives him a run for his money. And he grows to a point of superiority to Shepard, and to the player. When Shepard breaks, Garrus picks you up and dusts you off. I have played few games where I’ve actually felt that the companions are properly my equals – Mass Effect is one of them. It comes back to Garrus’ function as the voice of the developers. When the player falters, when they may get bored or tired or confused – Garrus is there to fix it. 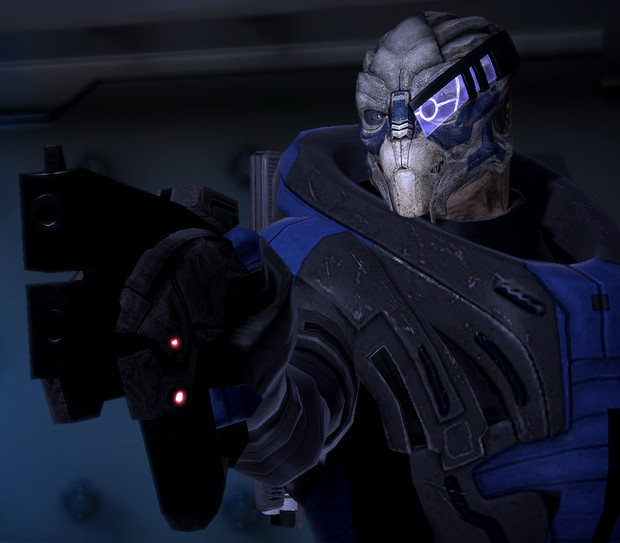 He is also elevated by his usefulness in combat. His sniping abilities are comfortably on par with the player’s. I remember taking him to Rannoch in ME 3 and getting pinned down by a Geth Prime and its cohort. Whilst I was using biotics against the standard Geth, Garrus was there popping Overload on the Prime to take down its shields, and followed that up with a perfect headshot on another Geth, all whilst I was still throwing one of the littler enemies around. The AI of ME 3 is very good, but it is Garrus that shines the most, a side-effect of all those calibrations I suspect. It would be foolish not to take Garrus with you, perhaps that is a part of why he is so popular.

Then, finally, there is how Garrus fits in to the classic story of a hero. Whilst Shepard blazes through the game starting a hero and ending as a god, Garrus is right there with you going from disgruntled cop to the Hierarchy’s best. In terms of progress, he outperforms the player. As Shepard you start and end a hero. Garrus starts a hotheaded C-Sec officer and ends a hero too. His is a story of redemption and progress. Of overcoming his failures – finding Dr Saleon, defeated Saren, tracking down Sidonis and ultimately defeating the Reapers. For the purposes of fulfilling the power fantasy of the trilogy, the player never has to overcome their failings while Garrus is defined by it. That makes Garrus more of a hero than Shepard ever can be. 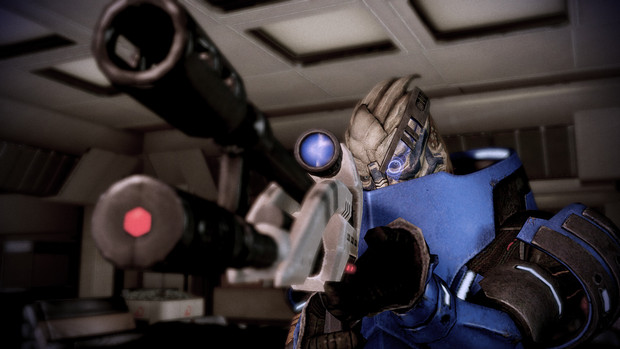 Throughout these beautiful, brilliant, but flawed games there is one Turian always there to help the player. Like the developers thought to put in a friend tailor-made for the enjoyment for our enjoyment, and to overcome their own failures of design. He’s just well written, well developed and fights as good as any Specter. He is integral to the full potential of the games, and essential to the story of Shepard – there really is no Shepard without Vakarian.