Un-offical Tie-ins is my running series on video games that should have been offical licened moive video games. Here is the first one if you missed it.

The Theme that haunted pretty much all my momories of pep band. What can I say? Trombones can never be too loud.

That was not sarcasim at all. Before Rocky Sylvester Stallone was more or less a washed up actor in NYC that was struggling to make ends meat while playing very minor roles in some not so well known movies.

So somehow between battling his alcohol addictions and other stuff... he wrote the script for Rockey. It is a common steriotype that he is a stupid meat head, but in fact he wrote Rocky and sold it to the studios by himself. Of coarse it was the 1970s and film was probably at its lowest low since the 1960s... econamically so studios were more inclined to make lower budgeted movies.

But it is probably one of the best Rocky movies and I think that is simply due to the fact the studio did not care too much about the writting and ensuring success.  (which generally the pressure to succede is why most movies fail or trie to hard)

A legend is born, A genre is reborn.

Not to say that there were not great boxing movies before Rocky, but when it hit the theaters is was in the time of economic depression that hit a coard with middle and lower class citizens across the world.

In 1976 it was a much needed message for urbanizing world super power. The young man tightening his boot straps still can go head to head with the best of the best.  Shot on a $1 million and in 28 days it was a sucker punch in an industry, as it earned $225 million in global box office that year.

Which for anyone that does not know is not the orginal theme song, its just the only one people can do bad karaoke to.

Less to say, highly succesful for an arcade game as it really challanged a players sense to wanting to be the best and show off their skills in a way that is not verly physical. ( I really cannot say that with 100% assurance as I have zero data to back that up, but considering they re-made it into Super Punchout, Punchout NES, and Punchout Wii... I have to assume that the arcade game was succesful enough to warrent so many games) I have to say there is a lot there to love about this wanderful machine. It used a dual monitor video system that showed the player's score higher than the actual screen, just like how most organized sports at the time would have an electronic display shoing the time and score of the arena.

Which is a reall neat idea when you think about it, as it made it a lot easyer to find out what level they were on and what theri score is. So it only amplified the sense of compition as watchers in the same room could keep tabs on who is the best very quickly.

That said, Nintendo did not make Boxing games popular. But I do think they brought a more modern perspective to it. Looking at your opponet face on vs looking from the side really gives a much more accurate experince to actual fighting. 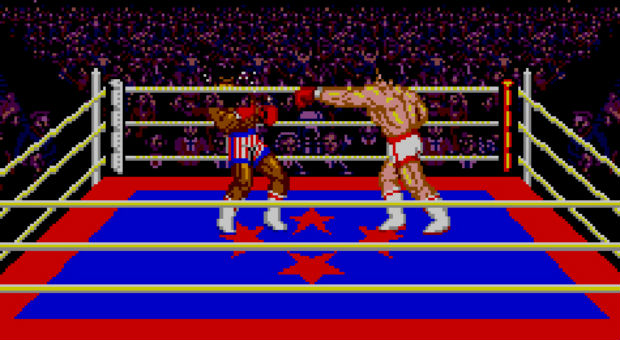 Which eventually when Rocky did hit the Sega Master System it still did not quite live up to the action and intensity that the Arcade or NES versions of Punch out provided. (Not to say for the time it did a great job recreating the Rocky experince in playable form, its just that little too heavy on graphically remaking it than providing complex yet enjoyable game)