A map I made is featured In Reflex Well I don't like to toot my horn that often, actually most people that ever met me would say that I am too shy and not out going enough. In many ways this is old news, but you guys remeber the FPS game called Reflex that allowed people to make their own maps?

No? I am not surprised since there is Toxikk and other games that look better. But I messed around with the map editor until I made a map that I was actually quite proud of. (Though I totally lack any knowlege of FPS tactics and stuff cause I am not a Quake 3 pro)

But hell this is my map and I do what I want with it... well sort of.  This baby took me about 6 months worth of editing and biting time, making sure the jumps were fun. Personally got inspired be the segment in the ROTT remake commercial where they were tons of floating platforms and I began to wonder if that could actually be part of a multiplayer map. I won't like I was inspired by a varaiety of FPS games including: Timesplitters, Perfect Dark, Halo, and 2012 Nexuiz.

I love a good multiplayer map, and I love a great LAN! You know what the gameing industry is missing right now? Is LAN mode. (cause seriously who wants to pay for something your machine should be able to do) It really rekindled my experinces in high school where we would go over to a friend's tree house and get 4-5 TVs and Xboxes and play Halo. (Cause Halo was the arena FPS for consoles that was popular at the time, I wreaked at THE ORIGINAL WARLOCK NOT WHAT THEY CALL IT NOW...) 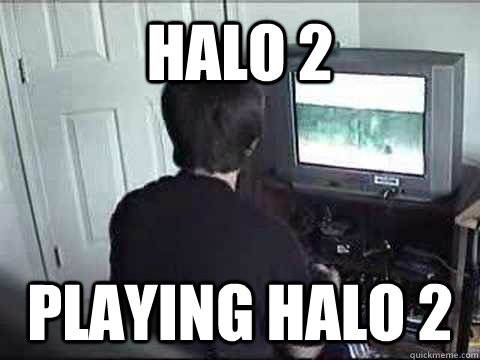 Ehm... sorry that was a rant back to the good stuff:

But a lot of building my own multiplayer maps really rekindled my love for FPS multiplayer action: I wanted the map that was arcade enough that new people could still feel like they could use the inviorment to their advantage. But yet have some smaller places for expirenced verterans to take advantage of the double edge jump, and some places the triple jump. (very hard to pull off)

Sooner than later I found myself looking at fourms and figuring out how to optimize my map so that it could be competitive. (which started my pain) As every polygon I spawned needed to be mapped. Which means all of the edges that were not visable needed to be mapped invisible, so they did not take up space and slow down someone playing on the map. Slowly but surely I took a map that was 45megabites and took it down to .1 ... It was so refreashing when my light maps only took a few minutes instead of hours.

Being in early access I really have no clue how much longer this game is not going full on release. It might be a few more years out as it looks, but I have met a lot of really interesting people that all are very tallented mappers... and somehow I have managed to impress the developers of the game enough that they wanted to study my map and put it into actual build of the game.

Anyway I totally understand if you guys have not purchased this game, and are not ever planning on doing so. But I am excited that some of my hard work is getting recoginzed :D

Oh and if you have the game it should be there somewhere... but here is a direct link if not: http://reflexfiles.com/file/65