A lot of shooters try to empower the player by giving him/her an arsenal of realistic and/or fictional weapons, and letting them loose on a battlefield/arena chock-full of hostile NPCs that are all too happy to riddle you with bullets and/or beat the living crap out of you. It’s a formula that has stood the test of time for over 25 years, and it can still provide an exhilarating experience (when done right, of course).

As time went on and technology became more and more advanced, shooters have improve that formula with more believable storylines, customization options, gameplay modes, and an emphasis on human competition. But rather than perfecting the formula, the gameplay/presentation additions made by most shooters try to embellish it.

While that in itself isn’t a universally bad design choice, it still does feel a bit like a missed opportunity. Most of us play shooters because we want to have a fun time blasting our virtual foes to pieces with our shotguns, submachine guns, and rocket launchers. For most shooter fans, it’s the best (virtual) way to unwind since shooters are usually easy to pick up and play, and can be played in short bursts (especially when compared to more demanding genres like RPGs, strategy games, and open world games).

Few shooters put an extra emphasis on the core shooter formula, which is mainly responsible for my love of FPS games. And fewer of them actually come close to perfecting that formula. But there is one first-person shooter in particular that stands out from the rest. An FPS that took advantage of modern/HD technology and did everything it possibly could to make the player feel like a true BAMF (you know what I mean :P). An FPS that saw its efforts pay off in spades.

That FPS is none other than Monolith Productions’ F.E.A.R.. 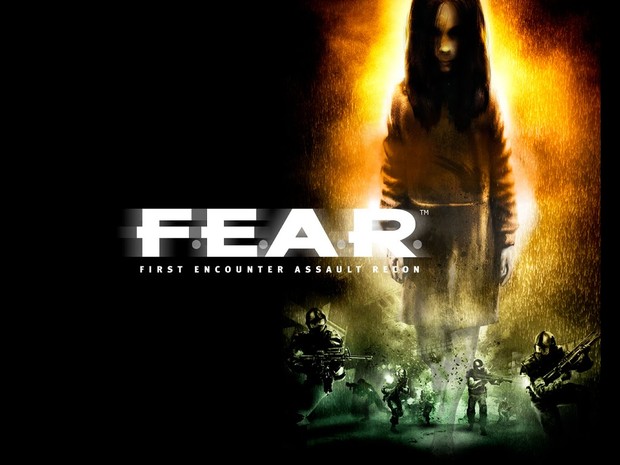 I remember the day I first booted up this bad boy on my PC. I kept hearing excellent things about this game and how it put other shooters to shame with its visceral gameplay and incredible audiovisual presentation, so obviously I couldn’t help but get psyched (spot the reference!). When I finally got to play the game, my jaws instantly dropped to the floor: the gameplay felt so GOOD. Everything about it screamed excellence and polish. It got to the point where I was no longer playing a game: I got sucked into the experience and became the badass action hero every shooter fan wanted to feel like. And ten years later, most FPS still fail to achieve the same feat as F.E.A.R..

Since we’re exactly two months away from F.E.A.R.’s tenth anniversary (it was originally released on October 18th, 2005), I figured that now would be a great time to give you a clear and concise idea why F.E.A.R. is still the undisputed king of FPS gameplay (IMO). I’m going to list five reasons for F.E.A.R.’s success in empowering the player and making him/her feel like the conqueror of his virtual space:

1) The gunplay is absolutely dazzling

Monolith Productions always had a knack for fiery shootouts and explosive scenarios: the Blood series and Shogo: Mobile Armor Division delivered their fair share of OTT and bloody action. But with advanced rendering technology at their disposal (and lots of John Woo/gun-fu binging), Monolith had reached their gameplay apex with F.E.A.R.. The in-game action looked nothing short of amazing and cinematic, so much so that it felt like you were starring in your own summer blockbuster flick (pass the popcorn). 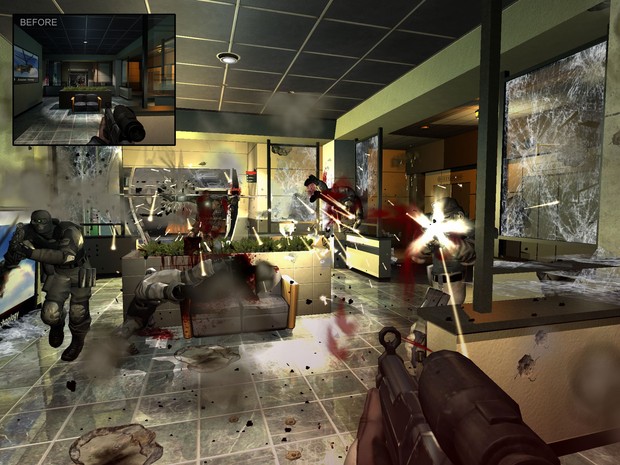 The picture above gives you a good idea of how hectic F.E.A.R. can be (just look at the difference between the “before” and “now” frames), but don’t let a measly screenshot fool you: firefights in F.E.A.R. have to be seen in action to be believed. These bullet fests are unlike anything seen in other shooters: every single piece of shrapnel created by the player and NPCs’ trigger finger can light up the entire scene in nanoseconds, and send sparkles and particle effects flying across the environment. This effect is amplified when using Bullet Time, which slows down everything and turns you into an unstoppable killing machine.

The sheer amount of action that can happen onscreen can be overwhelming at first, but it grows you on you the more you play F.E.A.R.. It’s so good, in fact, that it makes you look forward to the next gunfight!

2) The AI is scarily smart and realistic

It’s fair to say that in order for a game to be lots of fun, you need to be challenged. Without challenge, the entire experience would feel like a predictable pushover that’s bereft of tension or excitement. In a shooter, that challenge mainly comes from the hostile NPCs that populate the levels and their governing AI. And AI is something that F.E.A.R. excels at: the Replicas aren’t going to stand around waiting to get one between the eyes. 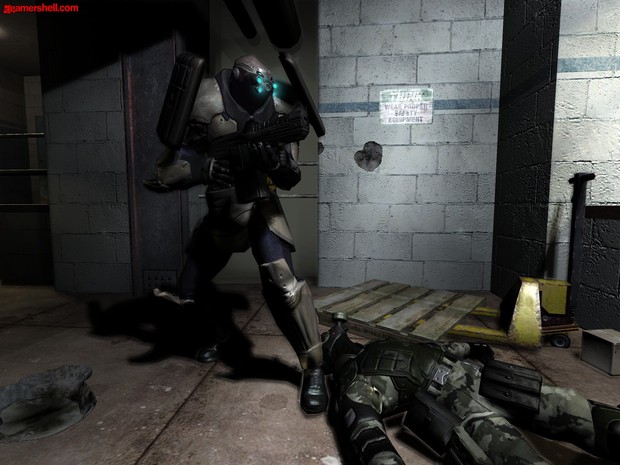 They’re going to flank you, knock objects down to create cover, flush you out with grenades, provide suppressive fire for their teammates, communicate with one another, and generally make your life a living hell. It’s safe to say that your foes are going to give you a really challenging time. Part of that achievement stems from the way the Replicas operate during combat. Unlike the waves seen in countless other shooters, F.E.A.R. prefers to dish out punishment in smaller quantities in the form of enemy squads. This allows enemies to better coordinate their strategies and tactics, and work as a team rather than a loose coalition of allies. Their strength mainly comes from their calculating demeanor, not their numbers.

It’s that level of intelligence that allows F.E.A.R.’s gunfights to be thrilling and heart-pounding. You never quite know what the Replicas are up to since they won’t hesitate to switch strategies on the fly, and they will be more than willing to pin you down if you don’t react quickly enough. To be honest, the Replicas are far scarier than the horror elements that pop up during the game’s exploration bits!

3) The weapons are amazing to wield and admire

A shooter lives or die by the weapons it provides to the player. They must be varied, feel meaty, and rip enemies to shreds with just a couple of rounds. The average FPS arsenal usually runs the gamut of pistols, assault rifles, shotguns, submachine guns, rocket launchers, grenades, and the like. But F.E.A.R. is not your average FPS, and as such, its weapon roster goes beyond what most shooters offer to the player. 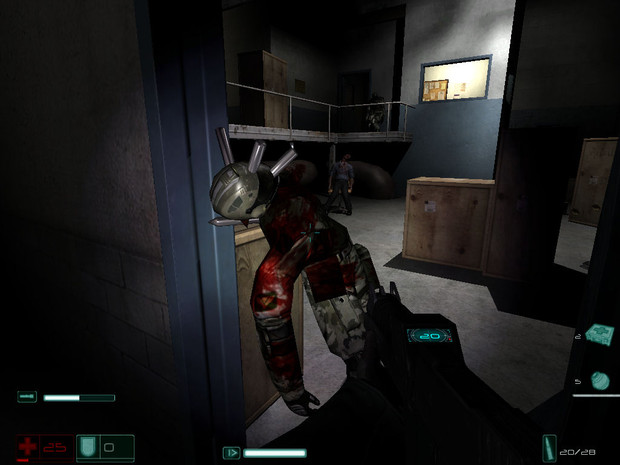 F.E.A.R.’s weaponry does include some of the shooter staples I mentioned above, although it ramps their stopping power up to 11. The shotgun, in particular, is brutal: just one shot at close-range can send an enemy flying into the air like a ragdoll (F.E.A.R. does ragdolls really well, BTW) or, if unlucky, vaporize him into a cloud of red mist. The Penetrator (pictured above) can pin your opponents to the wall with its rods, and is really sonorous when used in conjunction with Bullet Time. The grenades are even more magnificent to behold, especially when you slow down gameplay and watch the shockwaves rip through the flesh of your hapless foes:

In layman’s terms, F.E.A.R.’s weapons are absolutely exceptional to use, and will put a huge smile on your face. Kind of like Doomguy when he gets his hands on a new gun! The arsenal strikes an incredible balance between quantity and quality: plentiful enough to satisfy the needs of any discerning gamer, and powerful enough to keep the player using them.

4) The combat feels dynamic and balanced

Too many shooters can make one of two common design mistakes where combat is concerned: either they force the player to remain in a specific spot, or they overwhelm the player with lots of enemies to make the game more (artificially) challenging. These are traits that are shared by a a lot of cover shooters and arcade/hardcore shooters. It’s all too easy to bore or exhaust the player when all he/she wants to do is have fun killing their virtual foes and enter a state of “flow”, in which the participant is fully immersed in a feeling of energized focus, full involvement, and enjoyment in the process of the activity. 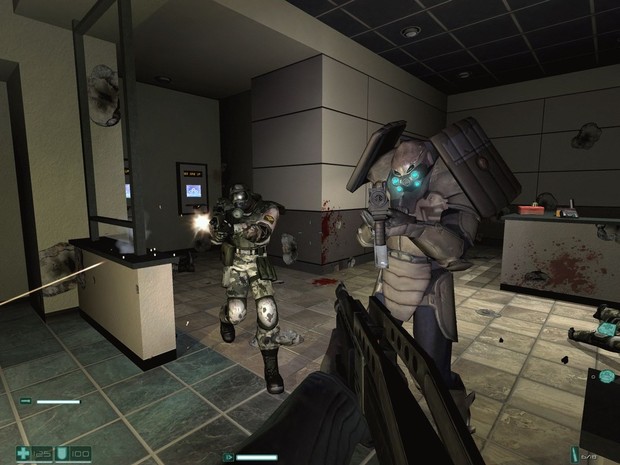 F.E.A.R. avoids that mistake by doing one simple thing: making the player feel outnumbered, but not outgunned. This is important because the player must feel like he needs to overcome incredible (but not impossible) odds, and he/she has to do so by fully taking advantage of the equipment and abilities he has at his/her disposal. Both the player and Replicas have tricks up their sleeves, which helps level the playing field for both sides and keeps things engaging and balanced. It also makes the game challenging, not punishing (huge difference between the two).

Both sides can end a gunfight in a matter of seconds if one outsmarts the other. The player may throw a grenade at an enemy squad and end a gunfight before it even started. Or the Replicas can kill the player by detonating an exploding barrel near him. The slightest miscalculation on either side can change the outcome of a firefight. It’s this fine balance that allows F.E.A.R. to maintain the state of “flow” that can immerse the player into the experience and optimally plan his /her attacks.

5) The game is effortlessly replayable

Modern games generally provide incentives for players to keep playing long after they’ve experienced the main bulk of the package. These incentives can be anything from multiplayer modes to New Game + to additional difficulty levels, things that most players take for granted nowadays. F.E.A.R. does offer some of those things, but they seem ancillary compared to the main reason most F.E.A.R. players replay the single-player campaign: because it’s fun. 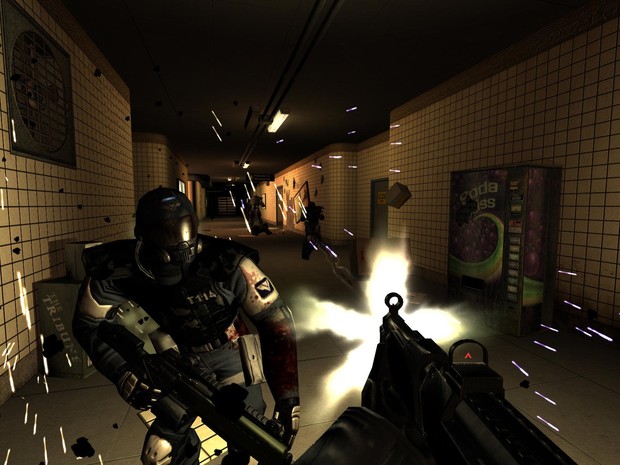 F.E.A.R. is not just highly replayable, it’s effortlessly replayable. It relies almost entirely on its dynamic and adaptive core mechanics/systems to keep the player entertained. No two gunfights or play sessions are ever the same. When you consider everything I mentioned above, you start to realize that F.E.A.R. was made to be replayed over and over again. You’ll want to try out new strategies, experiment with weapons that you initially didn’t pay attention to, and see how differently things will turn out. And the most shocking part: it’s not an open world game! And yet the game itself feels like a sandbox shooter because of its highly dynamic and experimental gameplay.

F.E.A.R. is the equivalent of a bag of potato chips: who stops eating after just one chip? There’s a reason all that goodness came in a big and convenient package! Speaking of package, did I mention that buying F.E.A.R. on Steam and GOG.com will net you two sizable expansion packs along with the main game? Say goodbye to your social life.

By now you should have a good understanding of why I’m singing the praises of F.E.A.R.: it’s brutal, challenging, unpredictable, exciting, engaging, and most importantly, fun. It’s the cream of the FPS crop, and even though it’s an old game by today’s standards, it still has the ability to surprise and entertain the player with its advanced AI, meaty weapons, eye-popping gunplay, and dynamic scenarios.

It’s a shame that we don’t have more games like F.E.A.R.. To me, it felt like a real trendsetter, a game that was far ahead of its time (and still is, in most ways). But if games like Resident Evil 4 and Modern Warfare are any indication, it’s that being too successful can lead to a flurry of me-too, derivative games that offer absolutely nothing new, innovative, or entertaining. So it’s probably for the better.

So what do you think? Is F.E.A.R. still one of the greatest shooters ever made? Let me know in the comments section below!