Back in the early days of the Playstation One, when the Internet was still finding its footing and magazines were still prevalent sources of gaming info, certain publications would release demo CD's for the Playstation. I can't recall which publication released it, but I remember getting a demo for the 1997 game Armored Core one day and spent the better part of several months playing its two solitary missions over and over again. The PS1 and PS2 sequels were some of my favorites, so I thought I'd take a look back at the one that started it all. 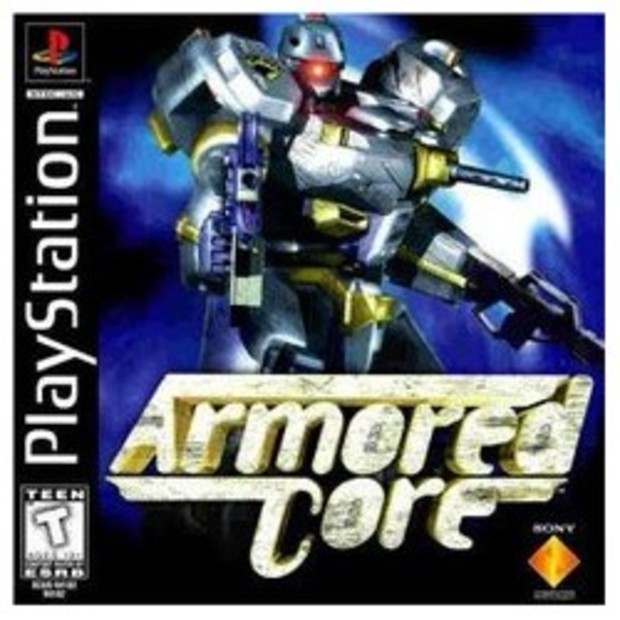 Armored Core is set in a dystopian future Earth where the environment has been reduced to wastelands. Humanity lives underground, and uses giant robots called MT's (short for Muscle Tracers) to do... something. Mostly fight. As a newly-joined member of the Raven's Nest, the world's premiere (read: only) mercenary organization, your job is to do whatever dirty task you're hired to do, get paid, and improve your battlemech Armored Core, a giant robot built to fight.

Gameplay: Armored Core's, well, core mechanic is its most endearing aspect: the freedom to customize your own personalized Armored Core mech. Everything from your mech's body to its internal engine and weapons systems can be swapped out for literally dozens of parts. Balancing your mech's offensive/defensive capabilities is vital, as many missions require speedier Cores, and others will need heavy armor and lots of ammo. Sadly, unless building the most generic "middle of the road" mech possible is your kink, you won't likely be able to play the single-player campaign with a single Core design. In their effort to bring as much variety as possible, Armored Core's arsenal is all over the place: some weapons--like the infamous Kurosawa--are so overpowered as to be game-breaking, while others are so weak as to be useless in any manner of combat situation.

Controller-wise, Armored Core is a bit of a mess. It didn't offer up analog support, so to look up and down you had to hold the shoulder buttons. Some third-party analog controllers found a workaround for this, but the official Sony-supported sticks just didn't work. In hectic situations, this led to you staring at the floor or ceiling while an enemy was chipping away at your health, leaving you frustrated.

The Single-Player Campaign also leaves a lot to be desired. Levels are brief and/or bland without much variety or challenge other than "go here and shoot that." The biggest threats tend to be tedium and poor planning: heavier mechs move at a glacial pace and can turn even short stages into boring slogs. Quicker mechs might find themselves quickly low on health or drained of ammo with nothing but a fore-arm mounted laser-claw to fall back on. The levels occasionally allow for more variation, including hunting for rare Core parts and battling other AC's, but the formula rarely deviates.

Multi-Player can be entertaining, provided you have friends to battle against. To be honest most of the entertainment I got from the Armored Core series was building a mech well-suited to one-on-one combat and taking on all challengers. Sadly, the original Armored Core lacks a single-player Arena system, which would be introduced in later games. Multiplayer is probably the only way to get any real challenge from Armored Core, as its own A.I. is pretty sad: MT's rub up against walls or ignore you completely, and enemy Cores follow predictable patterns (get behind you and shoot) that can be exploited. 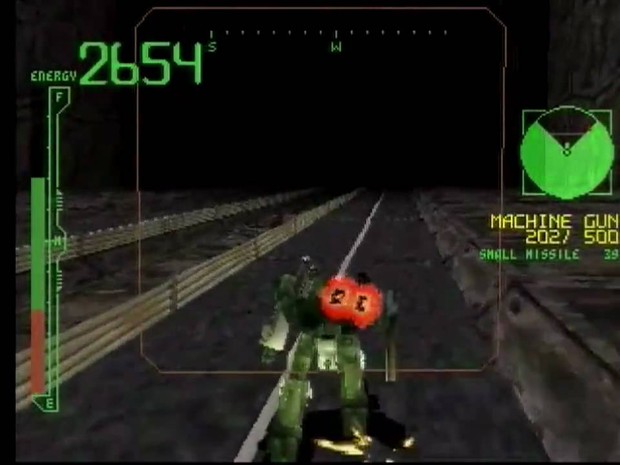 In the grim darkness of the far future, traffic moves freely.

Audio/Visuals: Visually Armored Core isn't all that pretty too look at, even for its time. It's grainy, with lots of choppy polygons that overlap poorly. The environments are ugly, and while most of your Core parts are at least functional some look downright cartoonish. Some missions have entertaining music, others have only empty silence, and you're more likely to spend the mission listening to the stomp-stomp of your Core and the constant alarm that sounds whenever your thrusters are out of juice and/or you are low on health.

Story/Setting: Another area Armored Core is found to be lacking is the story. There's brief, generic mention of a "Great Disaster" that forced humanity to move underground, society is run by two big megaconglomerates called Chrome and Murakumo Millennium, and that's it, really. Theoretically you can influence the progress of the game by siding with one against the other, but other than a few in-game emails you receive from the company you're loyal to and one or two underwhelming optional items received for being a loyal corporate drone, there's no real impact on gameplay or story. What little there is. The environmental destruction doesn't seem to really affect anything as you spend as many missions on the surface as elsewhere, and while you do see lots of desert (ostensibly because it's cheaper to render than forests) it doesn't seem to offer up a reason why everyone lives underground. 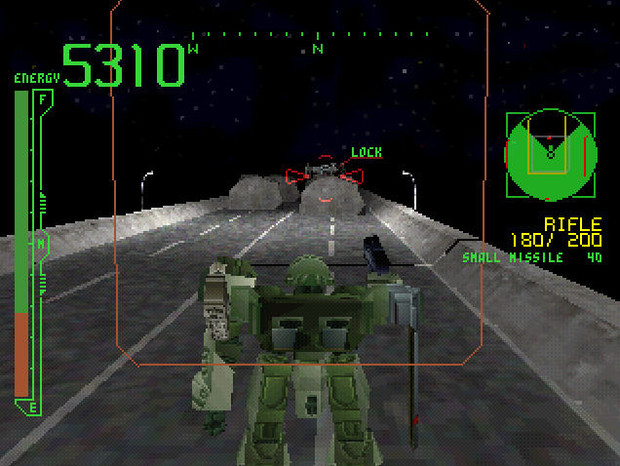 Admit it, for a second you thought I'd used the same pic twice.

Final Thoughts: Armored Core is--like many games focused on a single (albeit fun) gameplay concept--not very deep or complex. Customizable Mechs seems to be the first and last objective of development, but for what it's worth the concept is/was a good one. Armored Core has gone on to produce a legion of sequels (the latest and fifteenth being released in 2013), but for me the real magic was the PS1 and PS2 versions of the game.

At my heart, I'm a fan of BattleTech-style Mechs: heavy stomping tanks unleashing the arsenal of a battleship. The first Armored Core games kept enough of that aspect while hybridizing it with the more sleek, weightless feel of Japanese Mecha, which never seem to take factors like gravity or inertia into consideration. As the series progressed past Armored Core 2 however, the speedier Japanese flavor became more prevalent--probably because Armored Core is way more popular in Japan than North America. I lost interest and haven't really looked back.

But despite its flaws and the fact that it simply hasn't aged well at all, Armored Core fills me with nostalgia. It's unfortunate that we don't see more customized mecha games these days. Remember Robo Pit? This genre is just begging for a comeback, I tell you.