You know, I actually enjoy the Quake series despite its anthology-like feeling. The first Quake was pretty simplistic, Doom with polygons. But it did have an eerie soundtrack of metal scratchings by Trent Reznor and the multiplayer quickly became a popular pioneer for modern FPS deathmatches. I spent hours testing my rocket-leading and strafing skills against some well-designed bots. I still fall back to that ol' Serpentine Sidestep Shuffle when I'm under fire. 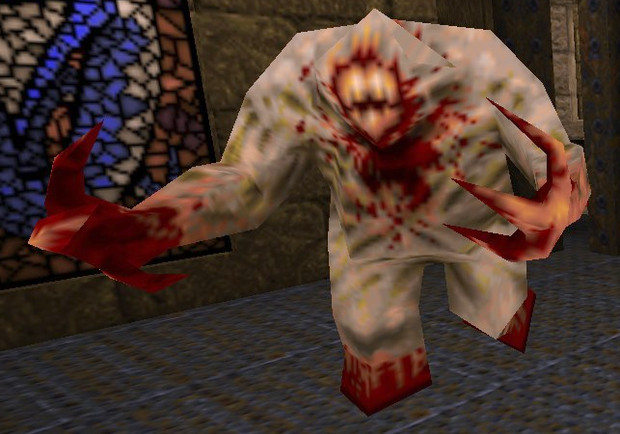 What? Snorlax is evolving! Your Snorlax evolv-OH GOD KILL IT WITH FIRE

The sequel, Quake II, was a much more slow-paced game, but it did introduce a solid setting and plot for the series. Mankind's battle against the twisted Strogg, a race of militarized alien cyborgs, was a solid foundation to build future games on even if the game itself was kind of bland. Quake III had little to do with the first two games, being a devoted multiplayer Deathmatch game to compete with titles like Tribes and Unreal Tournament which were becoming popular in the late 90's, when LAN and Internet connectivity allowed players to engage each other in larger scale battles than 1-on-1. 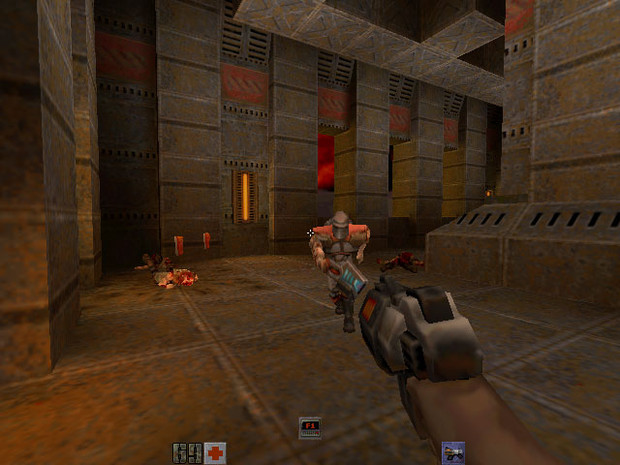 Quake has always had a rich color palette. Do I use the baby-poop brown, or the rust brown?

Quake IV is probably my favorite, slipping in behind the heels of Doom 3 with a similar engine and playstyle. But while Doom 3 worked a gloomy, claustrophobic style, Quake IV continued the plot of Quake II, revealing more about mankind's desperate counterattack on the Strogg homeworld through the eyes of the game's protagonist, Corporal Matthew Kane. Coming a little under six hours long, Quake IV's single-player campaign is brief but decently crafted. While many of the marines are copy-pasted, faceless Red Shirts, none of them come across as pointlessly dickish or stupid. They come across as level-headed soldiers fighting a deadly enemy on its home turf, and the fact that they're dying all around you says more about how dangerous the Strogg are, rather than how their deaths are contrivances to ensure your character remains alone (like say, Halo did). Matthew Kane isn't a super special snowflake, because he's just one member of a squad of certifiable badasses, and his one defining trait is thanks to blind luck:

In a particularly gruesome and cringe-worthy scene, Kane is captured by the Strogg and forcibly "Stroggified," and you get to watch from his perspective as his chest impaled and injected with steroids, his legs sawn off, and cybernetic parts grafted to what's left of his body. The Strogg cybernetic implants are designed to take over the body, leaving the human inside aware of what's happening but unable to do anything about it until their higher brain functions eventually degrade into nothing. I have no mouth, and I must scream. 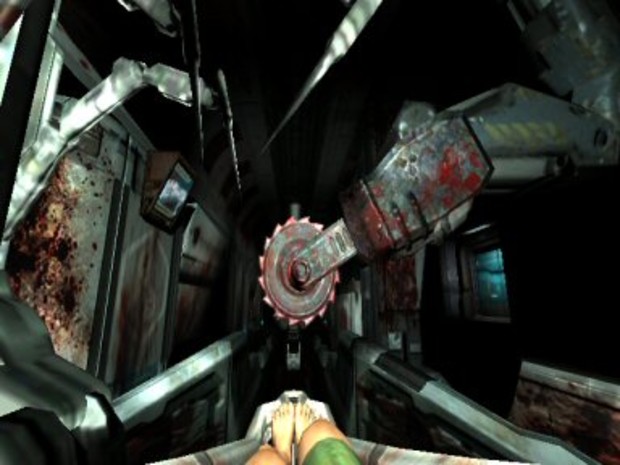 I saw this same picture at an anti-circumcision rally.

Fortunately, Kane is saved at the last minute by his squad, and this one-two punch of fortunate circumstances (fortunate for humanity, if not Kane himself) gives the marines an incredibly useful tool in the form of Kane, whose Strogg physiology allows him to access Strogg security and access their most vulnerable hardware.

It's a deconstruction of the "chosen warrior" trope, but one that Quake IV completely fails to capitalize on because Kane remains a silent protagonist. He has zero personality of his own even before he gets transformed into a cyborg. His fellow marines make a few off-handed remarks about Kane "looking like shit," but they all chuckle it off and go right back to fighting at Kane's side. Even soldier who have never seen Kane before just kind of shrug off his appearance, if they acknowledge it at all. Kane doesn't even get a paintjob to distinguish him from other Strogg, which just creates a weird kind of dissonance as Kane never seems to suffer his condition. He fights better, moves faster, has an advantage over other Strogg, and more or less just goes on with his day. 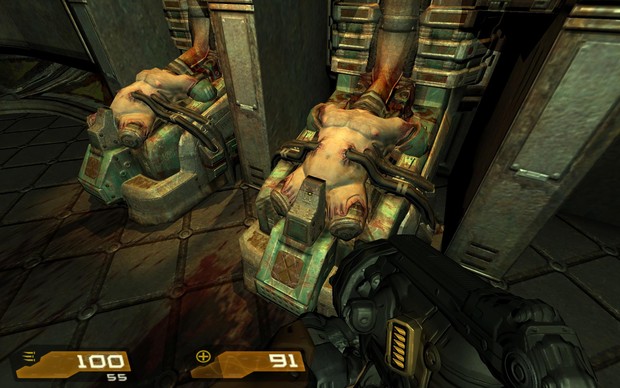 The Oculus Rift proved to be a slippery slope.

And while I like Quake IV, there is so much story in Kane's existence that I feel gipped for not getting to experience it. Kane himself is suggested to be a traumatized character: his backstory only mentioned that he was the last survivor of the Strogg attack on Space Station Armstrong, and the events there are classified by the Marine Corps. There are plenty of opportunities to develop Kane's character through signs of Post-Traumatic Stress, and after he is violently Stroggified that issue could come to the forefront as his unstable mind is forced to compete with an alien computer system fighting for control over his mind and the growing temptation he might feel to surrender himself to an unfeeling machine. Rekindling his humanity even as he battles the Strogg and escapes his own fellow Marines who have yet to realize he's still himself would make for a tense, frightening ordeal.

It's my hope, now that Bethesda is getting ready to release Doom 4, they'll turn that same team towards producing a proper sequel to Quake IV, one that embraces the darker themes that were only implied before. There's a lot you can do with Kane, the Strogg, and the war itself. What is the true story of the Strogg? Are they a race whose technology turned against them, or did they embrace it willingly? Why has their culture degraded to focus only on conquest and war? Were they fighting something worse that necessitated such a change? Will Mankind follow a similar path as its fight against the Strogg demands greater sacrifice and compromise? 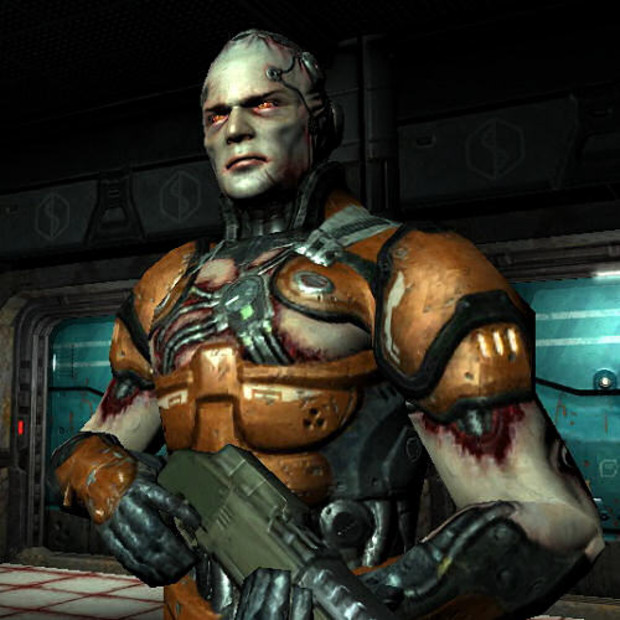 If the Master Chief is revealed to look like this, I'll start playing Halo again.