Why Gears of War 3 faltered...

WARNING: This article contains personal opinions about art that you may not agree with.  Shocking, I know.  It also contains spoilers for "Gears of War 3".  So, for those of you dedicated to not being spoiled about any aspect of this game, I suggest you turn away now. Gears of War is a series I hold near and dear to my heart.  Imagine a picture of a man screaming at the top of his lungs while pummeling a raw piece of cattle steak hanging from a cielieng; now imagine that translated into a video game - that's Gears of War and I wouldn't have it any other way.  Though I genuinely love the series for its brutal combat, its heavy-metal aggreatvated world, and the total focus on tone over realism, the third game of the series was a bit of a let-down.  Why was this the case?  Well, I'm about 5 Budweisers into a case, so I'll be happy to give you my point of view and then regret this blog in the morning.

Problem #1: Shine on, you crazy diamond.

In the Gears of War series, the Lambent are the "Flood" of the Gears universe.  Imulsion is the fossil fuels of the world of Sera, a wonder-resource that powers everything.  It turns out that it's actually a parasitic organism that (after some time) infects its host and turns them into exploding monstrosities committed solely to killing other life and infecting others with imulsion.  Alright cool.  Yellow-glowing space zombies.  The problem is that the enemy types of the Lambent go too many tennants of the Gears of War gameplay pillars.  As the lambent foes explode when damaged enough, there is a significant chunk of gameplay choices and styles of bloody executions that go amiss.

You can kill a Locust opponent with gunfire, but in some cases they can be "downed" allowing the player the use their weakened state as a shield, an impromptu grenade delivery system, or a punching bag for all of your choices of executions with a variety of weapons.  The Lampents are never "downed".  They fight until the explore, and while that fits in with the "fight-till-you-drop" mentality of space-zombies like the Lambent, it denies a HUGE portion of gameplay options for the fans; it's particularly saddenign to be denied the primeval scene of one creature (you, in this case) eviscerating another when it was such a big highlight in the series.  In constrast, the Flood in the Halo games infect common enemy types to create a new kind of creature that solely cared abouy causing destruction and infection rather than thinking out a sound combat strategy.  With the Lambent, some of the foot-soldiers even start to take cover and hide, using tactics, which goes against the idea that they're merely mindless monsters wanting to infect others. 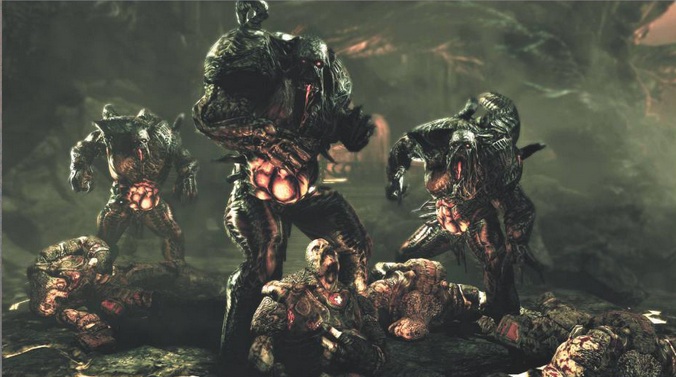 Alongside the aforementioned problems, the Lambent are WAY too numerous.  For enemy types such as the Flood in Halo, the Zombies in Half-Life, or the ReDead's in Ocarina of Time, they are used enough to the point of being a pallette clenser.  You have the main course of combat for whatever game you enjoy, but it's these enemies that change up your style and force you (for a little while) to defeat your enemies with particulars that you don't usually employ in combat.  It should be the Locust-style of enemy being the main course as they're equal to the players in terms of weapons and strategies, not the Lambent who bring such a small range of combat, but, sadly, they're the ones that permeate the beginning 1/5 of the game.

The first two Gears gave master-courses in introducing archetypes as permanent members of the squad.  Whether or not they were well-established is up to personal interpretation, but I felt that the four main members of Delta in the first game played their part well and were defined enough to be memorable and slightly layered.  In Gears 2, it was taken to a whole new level where our established Gears were given more personality and characterization, but we also got to experience great characters who had a surprisingly small amount of screentime.  Between the stoically religious Tai, the enthusiastically naive Benjamin Carmine, and the foul-mouthed good ol' boy that was Dizzy, all of the members of the COG managed to give the player STRONG imprints of personality.  Even side-characters like the curmudgeon Chap or the oddly formal Prescott left an impression. 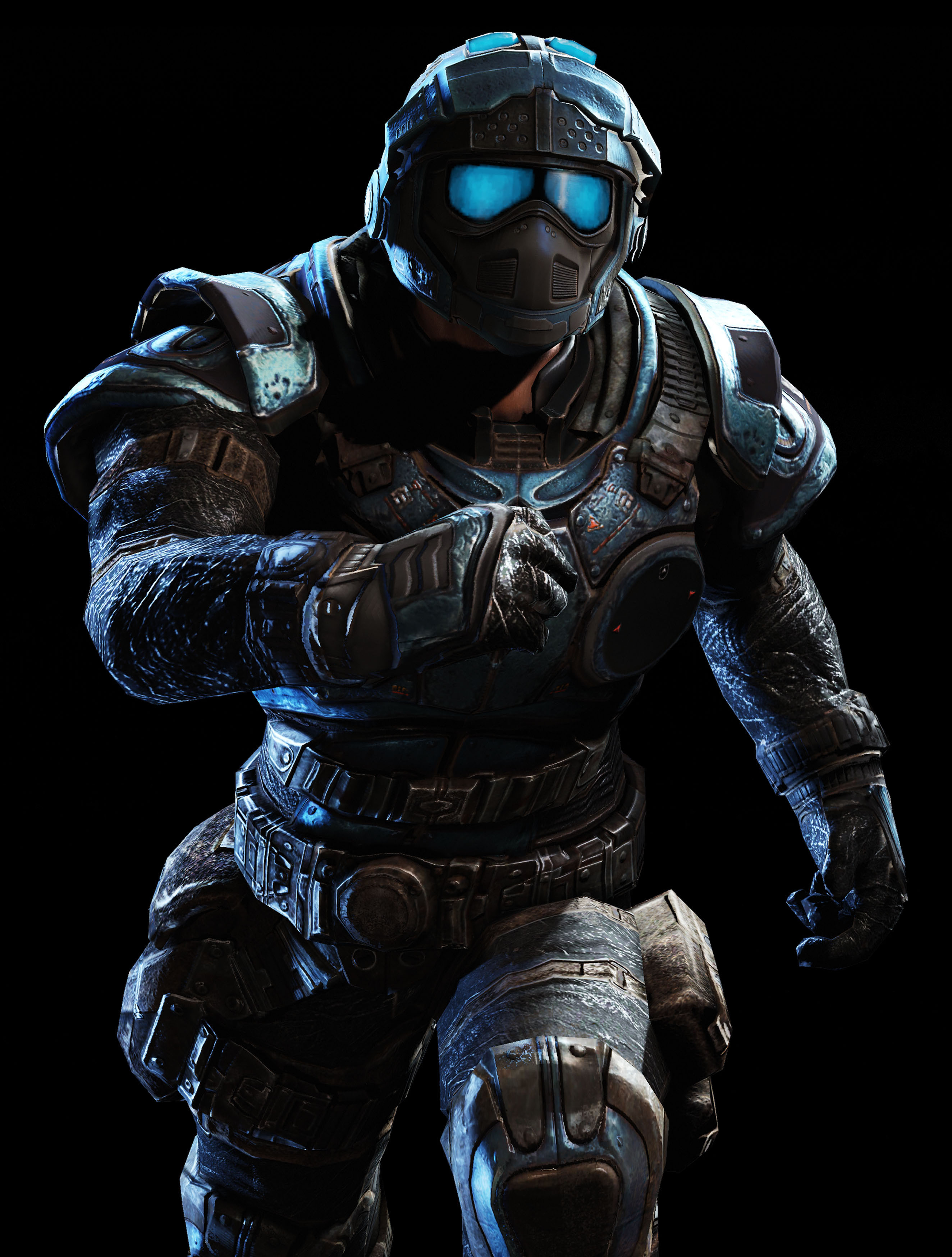 Then we turn to Gears 3.  We have a multitude of new characters: Clayton Carmine, Jace, Sam, Bernie, Adam Fenix.  I couldn't tell you one iota of what made those characters interesting, save Adam's guilt complex that is criminally overlooked in the games.  None of these characters leave an interesting impression outside of their designs.  Jace is a great counter-point to the black-male extreme personality to the Cole Train, but he's just so boring you might as well plaster a walking box of oatmeal onto the game.  The only trait we know about Sam is that she's a woman and that she may have an attraction to Dom.  That's about it.  For the developers, it seemed more like an opportunity to introduce more character skins to online multiplayer than characters who could have fleshed out the universe a bit more through contrast and comparison.

In a game like Gears of War 3, it's important to have your macro-level story perilous and be a cause of interest for the players, such as the surivival of the human race  What needs to be even more impressive are the personal journies in each game's story.  In the first Gears, Marcus had to prove himself against he treasounous charges laid against his feet  In Gears of War: Judgement, Baird and the squad have to overcome the tribunal against them for their supposed crimes against their government.  And even in Gears 2, it was a story of Dom finding Maria and the personal anguish in the attempt to find her; Gears 3 had almost none of that.

Gears 3 begins with the notion of Marcus sacrificing his military career, freedom, and respect of his fellow gears in order to try to save his father, and him failing.  Unlike, however, something like Gears 2, it is not a constant tale of constant expansion where the audience realizes what pains and lengths the character has suffered for thier beliefs, like Dom in Gears 2.  With how little Adam and Marcus interact in Gears 3, we get nothing that we already didn't assume from the prologue segment of the game where Marcus loves his father.  If good writers want us to sympathize with the character, take us through Hell and back with them, but also make it clear what they believe in and what they want. 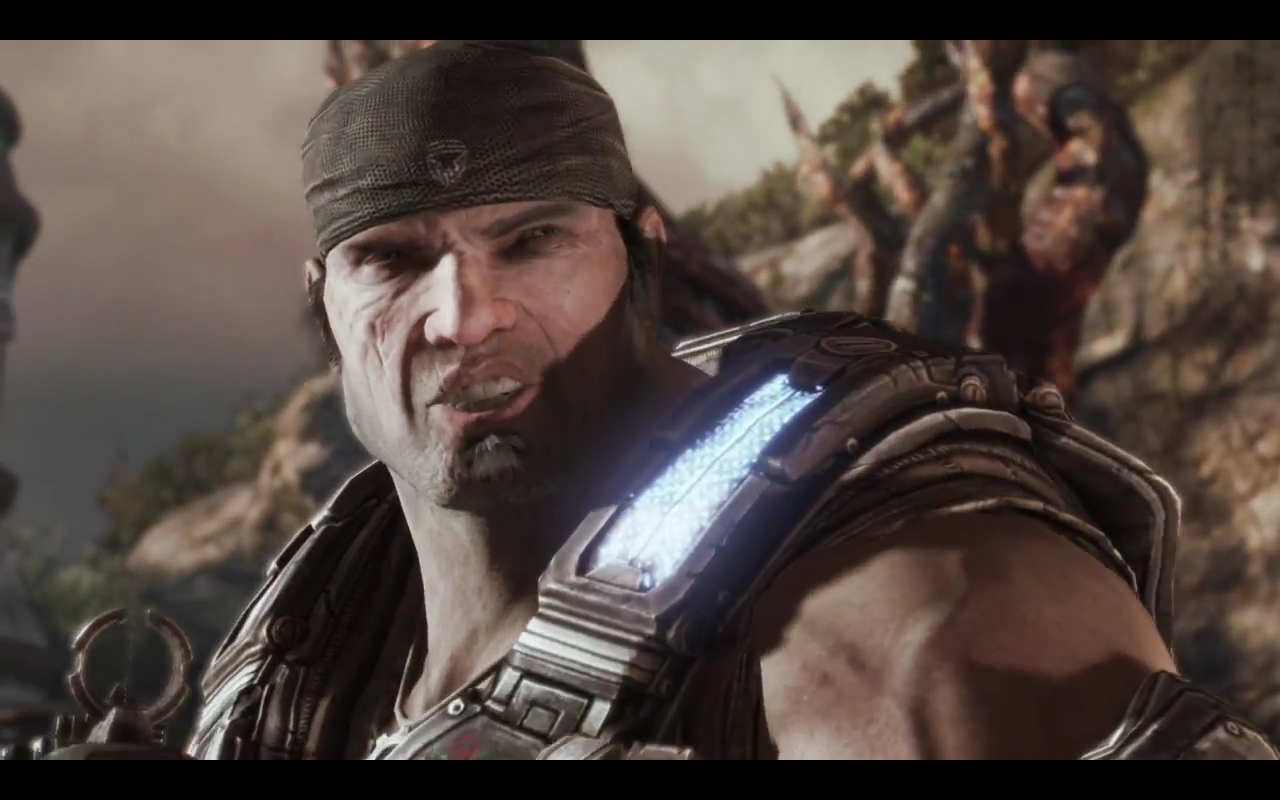 At the end of the game, where Marcus kills Myrah with Dom's blade, there doesn't feel like there's any build-up.  Maybe there should have been a moment where he wondered if humanity deservered to live after all of the horrors they not only committed to the world of Sera, but to their fellow humans, or maybe it could have been about the idea of Marcus trying to think of a life without warfare and struggling with it, but neither came to pass.  Adam dies and tells them to "live on" for him, but there really isn't any context for these people when living (comfortably and in peace) is what they've been trying to do.  Thematically, there should have been something more personal, that cuts deeper, than just ANOTHER "man survives evil" tale in the universe.  There's something to be said about storylines, dialog, and characters embracing brevity, btu don't make it so short that they don't even register as deep layering.

Anyway, those are my views on Gears of War 3 without call for analysis.  I hope you have a good night, and I really hope I don't regret writing this in the morning.  I do hope that The Coalition make Gears of War 4 into an INCREDIBLE game, but I'm just ruminating on the problmes we've seen in the most grand of epic finales.

Just a strapping young buck from the United States, or as some of you still refer to as "the colony that went awry." I like video games, pizza, pretending to work hard, and being both equal parts deep intellectual and juvenile child. If you have a dog, then I probably already like you. I have no idea what to put down for my fourth sentence.