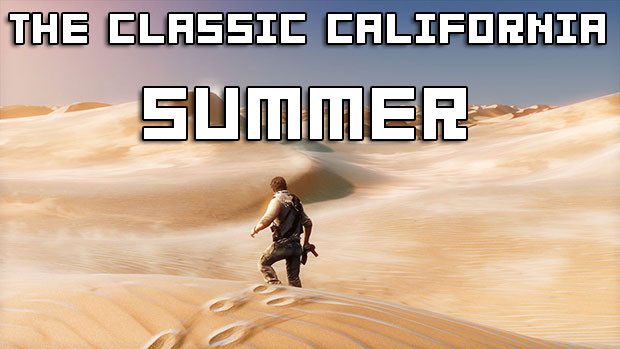 Summer for me means an excessive amount of sweating. I've never been good at keeping my composure in the heat, dehydrating within minutes of sweating in response to heat. Working in summer has basically mandated me to carrying around a water bottle, which I go through at least 6 times during a normal work day. Of course, when you think of heat in terms of video games, you're first thought is probably, "uncreative lava level."

Despite fire and lava being relugated to the uncreative pile of video game tropes and ideas, you might be hard pressed to actually think of good, hot levels in video games. At least, it might be hard to think of a few that go beyond your typical lava level in a game. But there are, and in thinking up this list I've found that good fiery or hot levels actually create quite a few interesting gameplay mechanics and wrinkles asides from instant death to lava.

So here's to a nice, warm feeling these levels conjure up. Be sure to bring some water though and stay hydrated. At the very least, try not to catch fire and/or dry up into a human prune. 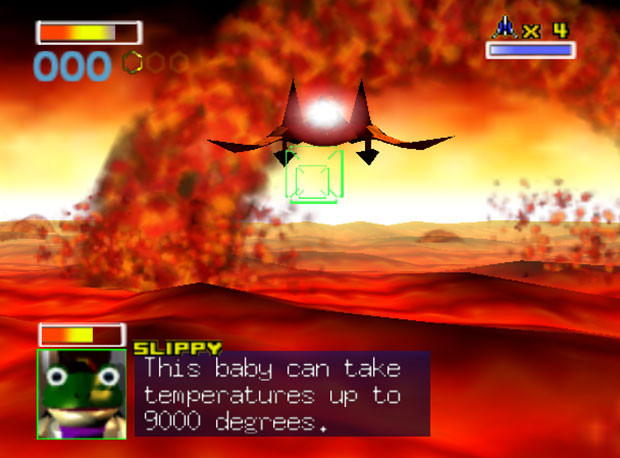 Solar - Starfox 64
Let's get the most extreme example of a fire/lava level out of the way with the ultimate in extreme fire/lava levels: the surface of a star, or at the very least a planet that is completely covered in molten magma. At first I thought Solar was just the Lylat System's local sun, until Arwingpedia told me the actual sun is called Lylat and Solar is just a red drawf. So don't worry, you're not flying through a sun! You're just flying over a molten star with a surface of 3,500 K, so no biggie!

Just imagine the first time you finished Katina, only to see your route extend to both Sector X and the freaking star. Flying over this thing's surface is fraught with dangerous flares and extremely evolved bioweapons that Andross believed made the molten rock such a strategically valuable location. Even your hi-tech Arwings, with their G-diffuser system, can't stay in its atmosphere indefinitely. You'll constantly be taking damage, so the level Solar is unique in that its design necessitates constant health pickups. 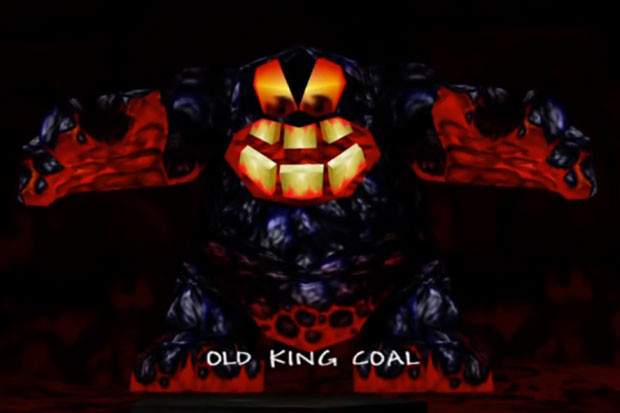 Old King Coal's domain - Banjo-Tooie
Old King Coal stands out as one of the more intimidating looking bosses from the Banjoverse. After all, you're fighting a giant anthropomorphic lump of coal in a train engine that heats up with you in it, making the floor super hot and choking you in high heat and smoke.

In reality, Old King Coal is pretty easy, especially if you just spam ice eggs at him. The point still stands that his entire environment takes place in what is essentially an oven that slowly cooks you. Things come to a head when, after reducing his body to just a hopping head, he turns up the heat and leaves it up until you put him down. It doesn't help that he gets faster the more his body falls apart from damage. So you better end things quickly before you get a new take on the fried turducken with the bird and bear duo. 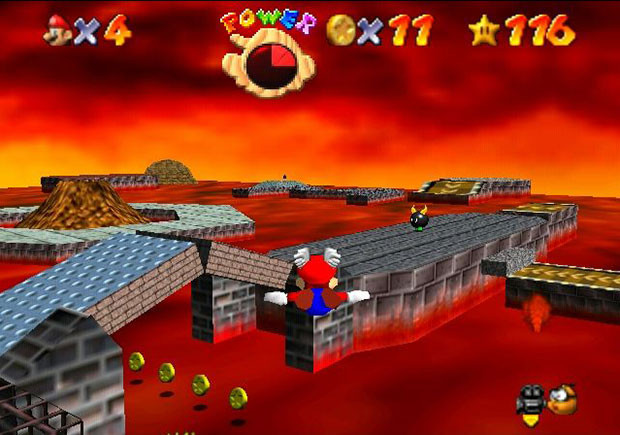 Lethal Lava Land - Mario 64
Lethal Lava Land is one apt name for a level in Mario 64. Fall off an established platform and you'll likely die. Lava takes 3 humongous ticks of health, where you bar only had 9, and of course falling off certain areas means you'll have no chance at recovery.

We see lava all the time but we never really stop to think how hot it really is just being near it. This is an entire world that is perceivably nothing but lava. Not only that, there are jets of fire rising out and a volcano in the center, with more lava and fire. I felt hot standing in the cheap seats of a pyrotechnic rock concert. Now how about standing on a brick platform, surrounded by lava, with jets of fire going off around you?

Temple/Hell - Spelunky
If you're skilled enough to get past the most difficult portion of Spelunky, the caves, you're greeted by an ancient temple filled with lava pools. Trust me, it's easier. At least you won't have to worry about blind drops.

Of course, lava pits spawning fire elementals is nothing compared to Hell itself. If the heat of the fire and lava isn't enough to make you sweat yourself into dehydration, the difficulty and razor sharp margins for error on avoiding demons, swing ball and chains, and lots, and lots of spikes, will make you sweat like you've just forgotten everything in the middle of an SAT. Don't cool off with water. Cool yourself off in hell with copious amounts of gold and jewels! 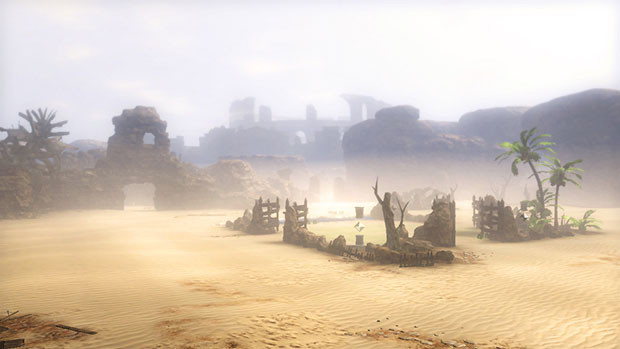 Gerudo Desert - Ocarina of Time
The Gerudo, like a lot of desert tribe analogues, are tough people for making a living someplace where your main climate is dry as fuck sand. They get their come uppance as sea pirates in Majora's Mask but in the here and now, the Gerudo tribe of the Gerudo desert live in a sparse environment.

A major part of this area is the sandstorm which has you walking in circles unless you can follow a tricky poe ghost. It's even filled with those annoying creatures who have nothing better to do than to pop out and pester you. These pests have no need to subsist on life giving water and instead would rather ankle bite you into submission. The only thing worse than dying of thirst in the middle of a sandstorm is falling over with chewed through ankles while you die of thirst.

Mojave Wasteland - Fallout New Vegas
Fallout New Vegas is the only game on this list that will tell you to drink water because you have been dried out by the parched Mojave Wasteland. Of course, dying of thirst isn't you're only worry, but it will constantly nag you on your priorities alongside hunger, radiation sickness, and disembowelment.

You'll be the only thing on the desert worried about actually drinking water as yao guai, death claws, and giant rad scorpions will either make a meal or you, or just fuck your day over. This is an area where an item is clearly labelled as dirty water but you don't think twice about drinking it because it'll give you health, even if it invisibly gives you diarrhea. Dirty with what exactly? Radiation? Probably. AIDs? There are super mutants about afterall.

Krogans can store water and nutrients like camels. They have several redundant organs in case of failure. Males have four testicles in order to reproduce as fast as the mortality rate. They revere a giant sand worm. Mass Effect is decidedly sci-fi but the mortal dangers of Tuchanka are pretty classic and old school. If the planet doesn't kill you, the krogans will. 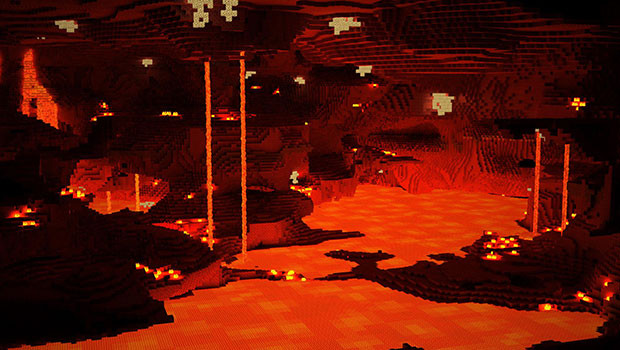 The Nether - Minecraft
The Nether is like hell. It's almost entirely on fire and anything that's not on fire is just lava. The only other thing I need to say about the Nether to describe its place on this list is just this one detail.

It is impossible to bring water into the Nether. It evaporates as soon as you try pouring it out. That makes the Nether pretty hot, don't you think? 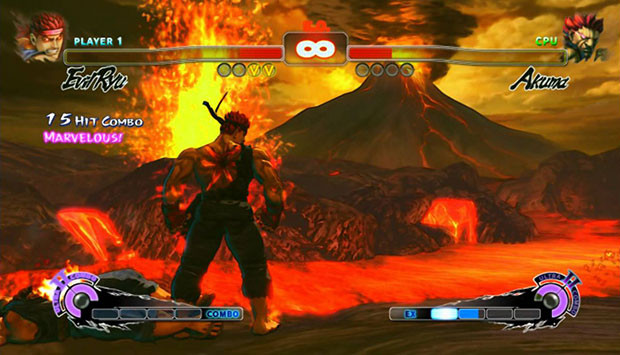 Volcanic Rim - Street Fighter IV
Does the World Warrior Tournament have a charter or even basic rules? Who decided to hold a bare knuckle brawl next to an active volcano?

Asides from sharing a similar name with a great movie, Volcanic Rim is infamous in competitive circles for its intrusive level of darkness. Pro players actively do not pick this stage because they consider that it has an effect on their ability to play. That's how dark Volcanic Rim is. We're treading on Mortal Kombat territory now. Sure, the fights are to knockout but what if E. Honda lands badly from that shoryuken and takes a nice lava bath? This isn't Scorpion's territory, this is a game where an oily Turkish wrestler manhandles a green, Brazilian man-monster.

Got your own choices for hot, fiery levels that make you sweat and thirsty? Leave them in the comments below! I know you have them! There's always plenty on these kinds of lists!