This week Blizzard sent out seven days of free game time to entice players back into The Collective. While veterans joke about its addictive qualities, and its debatable whether WoW counts as a "real" addiction, Blizzard has become deviously efficient at digging its hooks into gamers.

I have played WoW--on and off--since 2005. I've played (almost) every expansion, joined guilds that were fun, guilds that were stressful, made friends, lost friends, and even had kinky cybersex with other players (plural). I've got lots of good and bad memories of the game, from the quiet tranquility of the old Barrens at night, to the bustling floating city of Dalaran at the height of the Lich King expansion (now all but abandoned as the game has moved on) and seen Azeroth's loneliest corners, places only those utterly spent of the game--yet intent on getting their subscription's worth--have ever seen.

So with all these memories in mind, I decided--against my better judgment--to hop back into World of Warcraft just one more time, to see if it would hook me in again or if I was well and truly done. The answer? Sort of no. But mostly yes. 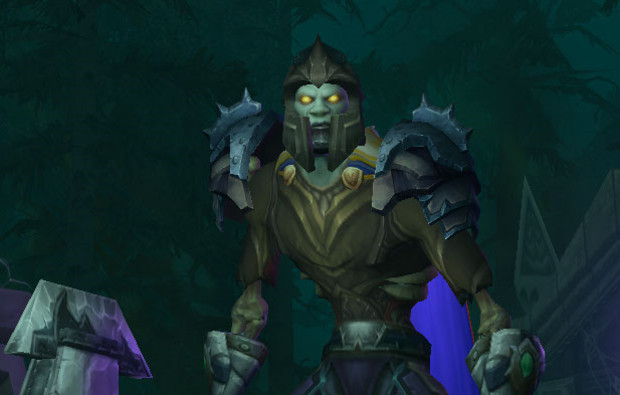 To revel in my nostalgia, I decided to make the same character I made the first time I played WoW: a Forsaken Warrior named Crowely. He's appeared over and over in WoW as I would play him on one server, get bored and delete him, then try again on another server. To me, nothing will scream "World of Warcraft" like those early levels in the haunted forests of Tristram, killing spiders and spamming /laugh because the male Forsaken has the most epic evil chuckle I've ever heard. The sinister Undercity music is still one of my favorite themes.

Crowely has developed a story of his own as the years passed. In life he was a farmboy devoted to his little sister, but the plague of undeath turned him and his sister was forced to flee. He never saw her again. He is a bitter, petulant undead, derisively calling Blood Elves "pinkies" and has a bad habit of grinding his knuckle against his jaw, working a groove into his chin. There exists a ruined house in the Eastern Plaguelands (north of Andorhal) that I like to pretend is Crowely's old homestead, and he sometimes returns just to stare at the forgotten, rotting wood and remember happier times.

As I played over the past few days, I followed that old path of Crowely's. I saw all that was good and bad about World of Warcraft. It seemed to me that in more than ten years, while I've certainly changed, World of Warcraft hasn't changed one bit. 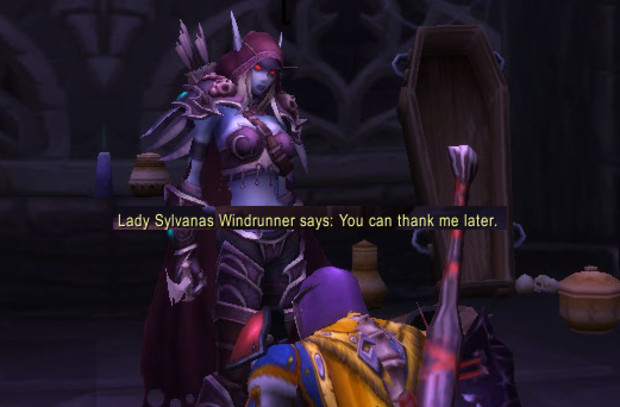 By law, staring at the Royal Navel is punishable with a swift kick to the rotten marbles.

As I mentioned above, Blizzard knows how to hook players. Their games are perfect examples of the "easy to play, difficult to master" forumla, sprinkled with all manner of delicious little rewards to keep gamers engaged. Standard quests lines might not branch out much from the "beat up X to collect X amount of X" forumla, but every now and again WoW shakes things up with quirky mini-games, odd story threads, cameos from the setting's many famous heroes and leaders, dry humor, surprisingly poignant scenes, and out-of-place pop-culture references (a dude who is basically Rambo is running around the Redridge Mountains, being an even less subtle ripoff than anyone Reb Brown ever portrayed). In addition to simply bashing enemies for quest items, you can pick flowers to brew potions or make inks for magic inscriptions, mine for metal and gems to forge armor or craft magical jewelry, skin beasts to shape into leather armor, gather ingredients for cooking, sew bandages, study archeological sites, and even go fishing. Later expansions created a literal Pokemon-style minigame where you build a team of combat-ready pets to battle one another. You can improve your reputation with various factions, play in Player vs. Player combat arenas, or prepare yourself for massive raids to witness some of the more important moments of the game's (glacially slow) plot.

"COLLECT OUR SHIT," World of Warcraft all but screams in your face. "COLLECT ALL OF OUR SHIT."

There's so much shit to collect. And when you're paying money to buy the game, then money to subscribe to the game, having lots to do is a great way to justify both. But if you're not happy just spending money to spend time getting the shit, you can pay more money to buy more shit they don't even include in the rest of the shitpile. Want a super snazzy mount only available in the WoW Store? You can buy it for $25 real-world real dollars. $25 for what is basically a skin of button that makes you move slightly faster in-game.

And you can buy unique pets for $10. And Game Time tokens for $25. Yes, buy one month's worth of game time for $10 more than you'd usually pay and then go into the game and sell that $25 real-world real dollar token to some other shmuck for not-real in-game currency.

Subscribe to our shit to buy our shit to collect our shit to have all of our shit. Oh, and you can pay to beef up your character to Level 90. For $60. So buy the game, buy all our expansions, buy a subscription, then skip all that bullshit to get right to the end-game shit so you can spend more of your subscription time collecting more of our shit. 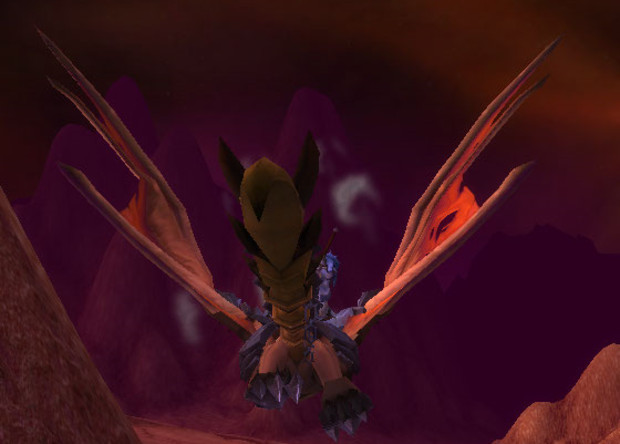 This is pretty much 60% of your World of Warcraft experience.

I want to say this is a new development, but the fact is World of Warcraft is at its heart a very naked cash grab. Sure the story is still there, but it's paid little more than lip-service in the name of Blizzard's disturbingly obtuse greed. For an MMO that can still (somehow) justify its demand for subscription fees in a world of free-to-play MMO's, for a game that makes billions of dollars and still has millions of subscribers, Blizzard doesn't seem to be content with what it has and continues to demand more. And players keep coughing up more dough despite Blizzard running the show with the same ethical boundaries a company like Electronic Arts might wield. We might scoff at how vulgar Dungeon Keeper Mobile was for its microtransaction bullshittery, but we happily fork over money for the chance to own a flying horse in World of Warcraft. Why? Because WoW is designed to get under your skin and coax more out of you than it gives back in return.

And in a truly mind-baffling bit of hypocrisy, WoW has grown into an increasingly single-player experience over the years despite its continued demand for online subscription fees. In its early years, World of Warcraft was far more difficult, often requiring players to team-up in order to complete objectivesm, even outside of dungeons. But now basic adventures are a cake walk, dungeons have been watered down into levelling grindhouses random teams of anomymous players--who see communication as a time-wasting annoyance--rush through in minutes, leaping from insta-dungeon to insta-dungeon to somehow escape the tedium. No one talks to each other, chat sits empty, and people get impatient and angry if you show the slightest amount of incompetence or have the audacity to slow them down. I was playing a match just last night where the tank died because the healer couldn't keep up with him, and when the tank died the mobs focused on me, killed me, and when I was sent to the graveyard I was kicked from the party because it would have taken me too long to get back into the dungeon.

There's nothing left of World of Warcraft to make the game feel like a living, breathing world. There's no reason to keep it online or force people to pay $15 a month to play something they've already paid for. There's nothing left but the scavenger hunts, the Checklist of Shit. No one has any tangible reason to enjoy the multiplayer aspect of this massively multiplayer game. I was solicited by two guilds who thought "we're trying to get guild achievement X and need more players" was an enticing recruitment point. It's like they don't even care who you are or what you want to do in the game, as long as you're contributing to their shitlist. I saw entire guilds comprised of a single player and his numerous alternate characters, existing only so that single player could have more inventory space for his shit and achievements on his shitlist.

As long as Blizzard's greed remains unsatisfied, I will never be satisfied playing World of Warcraft. For all its bells and whistles and items and mounts and pets and shit, World of Warcraft just feels so insubstantial. Back in the day, I might have been convinced otherwise, because I ran with a few decent guilds and we made our own fun outside of Blizzard's exercise in fantasy-themed busywork. But without any need for guilds, without any need for other players, the game lacks any kind of satsifaction. Their are achievements without accomplishment, actions without reactons, a plot without a story. NPC's might talk to you like you're a super special snowflake, but in the end you're as meaningless to WoW as everything else, because you can never really finish the story. WoW can't end, because Blizzard wants you to keep collecting shit. If the story ended, you'd stop collecting shit. 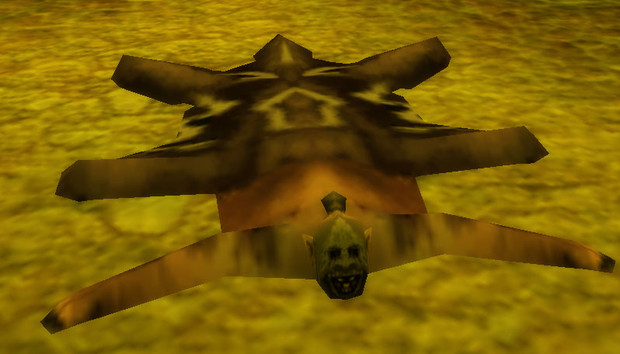 Have you guys actually looked at these carpets? What the fuck, Horde?

You Keep Saying That Word.

Despite all of this, I'm still on the fence about World of Warcraft. This article turned out to be more venomous than I intended, yet it took me more than three days to sit down and write it because I was so busy playing World of Warcraft. Maybe that says more about me than it says about the game, but it still speaks volumes about what World of Warcraft is. There are no rules that say you can't hate your addiction, but this time I think I finally have World of Warcraft beat. I spent my free game time reminiscing about the good old days, but coming back only reminded me that my best memories aren't thanks to WoW, they exist despite it.

I can move on. WoW has lost its hold over me. I don't feel the urge to buy Warlords of Draenor and another subscription. Blizzard just announced its intent to announce a new expansion announcement in August, and while I'll certainly enjoy Blizzard's masterfully-designed CG trailers, it will never trick me again. I'm leaving, WoW. It's over.

Right after I get Crowely to 90. 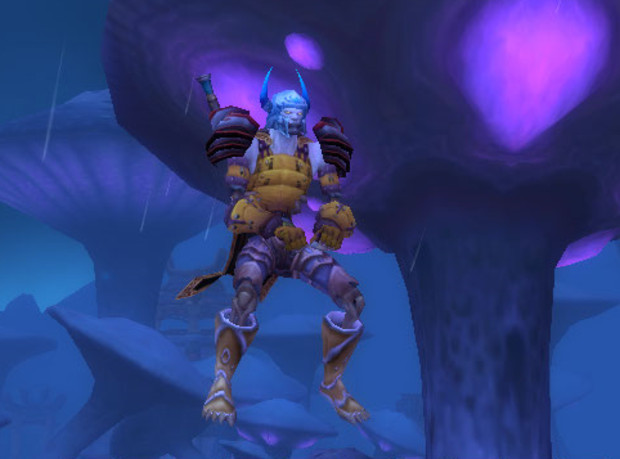