Minimalist Storytelling - What Makes it Brilliant

Games have had storytelling in them for decades now. You play as a charcater, you have a force to defeat or an objective that you either set yourself or is set out for you, you encounter more problems as you go about achieving the goal and you eventually conquer the issue.

I love stories in games. Some of them are told backwards (To the Moon), some use old cliche's to tell a powerful story (The Last of Us) while other simply guide you through a 2D land filled with enemies to rescue your love-interest (Almost every Mario Game ever). Personally I think a story can make or break a game.
Telling a great story can save your game when the gameplay mechanics are simple and run-of-the-mill.

However there are other stories that go against the traditional storytelling structure. They tell stories with great scope without ever really providing details or sometimes leaving out context entirely, letting the player figure out what is going on.

What I intend to try to do is to analyse what makes these games tick and why for certain games we take it as a stroke of genius while, for others, it can become convoluted or even miss the mark entirely.

So let's start off with what exactly makes something a minimalist story. 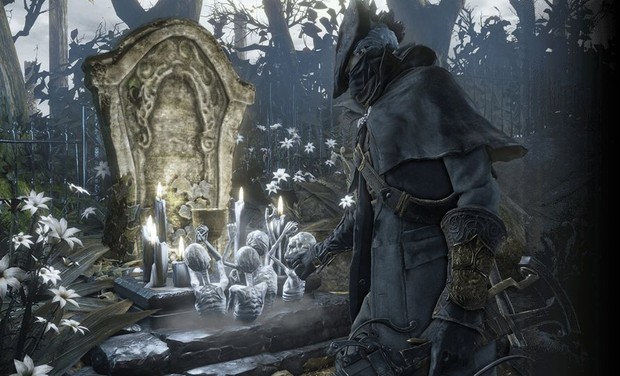 A more recent example of a minimalist story is Bloodborne, where the player character is administered some blood then thrown into the world of Yharnam. You are here for a reason but you can't remember what that reason is. Since the player doesn't know the reason, neither does the character.
As you explore, you realise that something awful has happened here but you don't know the origin of the scourge, nor do you know why certain factions are aligned against others.

There are barely any cutscenes (three or four off the top of my head), and narrative is basically told through gameplay.

Yet, from playing through Bloodborne five times, I know almost everything that has happened in the world of Yharnam. I know about the tragic story of Father Gascoigne, I know what The Healing Church's purpose is, I know why Yharnam is called Yharnam, I know why Rom became a spider... Yet it was never delivered to me during an emotional cutscene or through expository narration.

I discovered it through reading notes, reading descriptions of weapons or items, fighting monsters in certain places, walking through buildings, talking to characters that offer cryptic clues about certain events.

This is minimalistic storytelling at its best.

It allows the player to engage in the world that the game designers crafted for you. Oh there's a Upper-Cathedral? Wait, what are these slug things, hold on what are those alien things? Wait why can I break this object? Why is there a Great One in the basement?

The story presents you with ludicrous creations and basically tells you to connect the dots on your own and maybe, just maybe, you'll find the answer that is best for you.

Minimalist storytelling allows developers to tell a story that has no real "right or wrong" outcome. I will never know what was going on in Miyazaki's head as he wrote the plot. He has one understanding of the plot, I have another.

Subjectivity is why this form of narrative delivery works. Each person can come to their own conclusion.

In Limbo, do you reach Heaven at the end? Are you returned to the living world. Why are you going through Limbo in the first place? Is it a realm that people fear to tread?

Allowing the player to reach their own outcome is just as interesting a notion as delivering excellent, dialogue-heavy cutscenes.

Hell, films and books have been doing it for years. The Call of Cthulu is a lasting piece of work because it leaves a lot up to the imagination. Sure, there are plenty of times that Lovecraft tells you the names of things or certain creations, but you have to work out the details yourself.

When games utilise this method, it can pay off to great effect.

Another thing that it allows you to do is to connect with the world or character emotionally.

In Journey, I have no idea why I'm going to the mountain, but the mystery of not-knowing is why you become attached to your little traveller. You want to unravel the mystery with them.

The game takes you through ruined cities and shows you mysterious, God-like White Cloaks that show your character hieroglyphics. They mean nothing to you or your character, but you're meant to unravel it yourself and let the imformation come to you in your own time, if you can handle thinking of it that is.

They don't spoon-feed you the information. Spoon-feeding is for those unable to feed themselves. The developers show a bit more respect towards gamers if they think you're smart enough to understand their story.

This sense of personal attachment is also evident in the excellent Shadow of the Colossus, a game I recently played and thoroughly enjoyed. Your character doesn't speak, instead allowing the world to speak to you.

You fight through monstrosities that are massive in size and through a story that is epic in scope. You have no real idea just what is going on though, not until the end when everything you have done is called into question. It is a brilliant piece of work that, unlike others on this list, specifically tells you who is good and bad by the journey's end through cutscenes.

But up until that point, cutscenes were barely relied upon. You race through a deserted world that has been lost to the devastation of time. You know not of the context of why this land stands here or what the Colossi even are. You just go through the motions and have to connect certain plot threads yourself.

This type of storytelling is both versatile and unique, not to mention extremely difficult. It's all well and good having a minimalist story, but some games take it too far.

Some try to equip minimalist storytelling as an excuse when really, all that happened, is that they didn't cover all their bases and didn't really have a clue as to what they wanted to do. 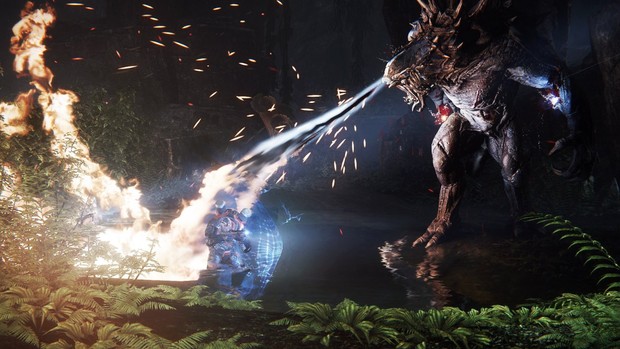 Evolve is not a minimalist story. Truly, it isn't. You're a group of mercenaries sent to kill a monster on a planet. You can help out survivors on occasional missions... That's it.

I've heard people try to defend the campaign mode because it takes the same approach as other games on the list. One such cretin excreted this excuse:
"Everybody lauds Bloodborne for telling a story in a different way, but when Evolve tries to do it everyone says there isn't a proper story. You have plenty of opportunities to figure it out."

Obviously I got rid of all the spelling errors and added in synonyms for better effect. But you get the idea.

The difference with Evolve is that the developers went into the game with the idea that they wanted to create a multiplayer-only experience. The campaign is bare-bones, with only a tiny story-thread (kill the monster) running consistently throughout. There is no character development, no emotional heft, no real villain in the game is ever identified.

Sometimes the opposite occurs though. Somtimes, instead of making a game feel barren in terms of story, it can convolute the plot and bloat it to the point where you'll need a wiki guide open on your laptop, just so you know what the hell is happening.

For instance The Evil Within.

I will defend this game to the death. People bash it for having an awful story.

All the elements are there for a truly inspired and amazing story. However the presentation of the narrative was a risk and it just did not pay off at all.

Instead of feeling original and fresh, it just felt confusing. That confusion at the start of the game is intentional, but that doesn't mean it's a good thing for everyone. While people like myself don't mind the confusion and try to work it out for ourselves, a lot of people grow bored of shooting nameless enemies over and over to get to another point in the story that just doesn't make sense.

The Evil Within failed to do what Journey, Bloodborne, Dark Souls, Limbo and the rest all did. It wasn't that the story wasn't engaging, it was simply hidden behind layers of gameplay that you had to get through in order to better understand the context of the world.

It misrepresented itself and because of that, is seen by many as a convoluted, disjointed mess.

Even by the end of The Evil Within you still aren't sure about everything that happened.

A more recent example is the "last" installment to the Five Nights at Freddy's series. 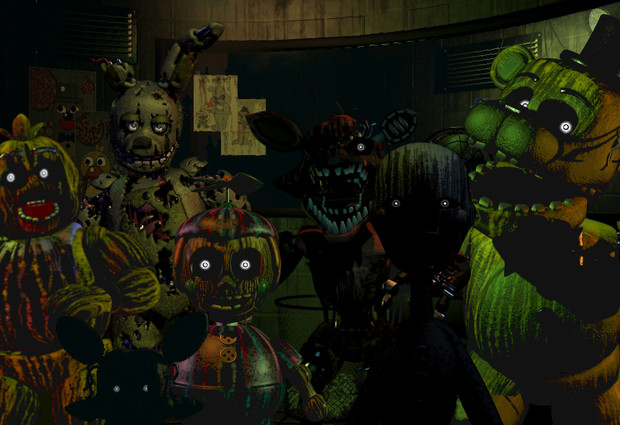 Now say what you will about the quality of the games (I've personally found them rather dull if I'm honest), but you have to admit the story is, if nothing else, interesting. It doesn't hold your hand and leaves out certain plot points for the player to fill in with their own imagination.

Up until Five Nights at Freddy's 3, the story made some sort of logical sense if you pieced it together well enough. However, after 3 and now with 4, it appears that the lore has contradicted itself.

The contradictory nature of the story doesn't make the narrative seem more intelligent or mysterious, it makes the designer seem incompetent. Not that Scott Cawthorn is incompetent, he clearly knows what he's doing, but doing something like this makes him seem like he's been making it up as he goes along.

Planning and execution are both required in order to make minimalistic stories work.

I'm almost 100% sure that most developers have a plan of their narrative before they start the game. How hey execute comes down to personal preference.

But gamers cannot deny how well a game works when it tells us a solid story without ever giving us specifics. It makes us feel like we crafted the story alongside the developers.

I'm all for big-budget cutscenes and emotional weight to each NPC you meet as you walk along your journey. But sometimes, less is more.
And often, you'll find that your game will find increased longevity due to the developer engaging the player with an interesting world and lore, giving the player the illusion of discovery when really, the answers were there all along.

When done wrong, this form of narration can become a burden, dragging its sluggish form to the finish line.

However in the hands of developers who can juggle mystery and yet make the story contain narrative context, this sort of thing is beautiful to behold.

And it's even better to play.