A Look at Video Game Ads of the Past: GameCube (Part Two)

Hello and welcome back to part two of this look into print ads for GameCube games. If you missed part one, check it out for ads relating to first party releases for the system. This segment showcases third party games, both exclusive and multi-platform. Since I expanded this series to include Playstation 2 and Xbox entries, I decided to divide up the third-party games across these three systems.

Looking back after all this time, it feels strange seeing the exact game released over all three home consoles. Since the Wii came out, I’ve come to expect multi-plat releases that have one version for the PS3/360 and one exclusively for the Wii. Yet, back then, the same game, more or less, could be released on every system, as each was graphically comparable. As a Nintendo fan who has expanded into PS3 and PS4 in the last year, I hope the NX can support multi-plat games like that again. 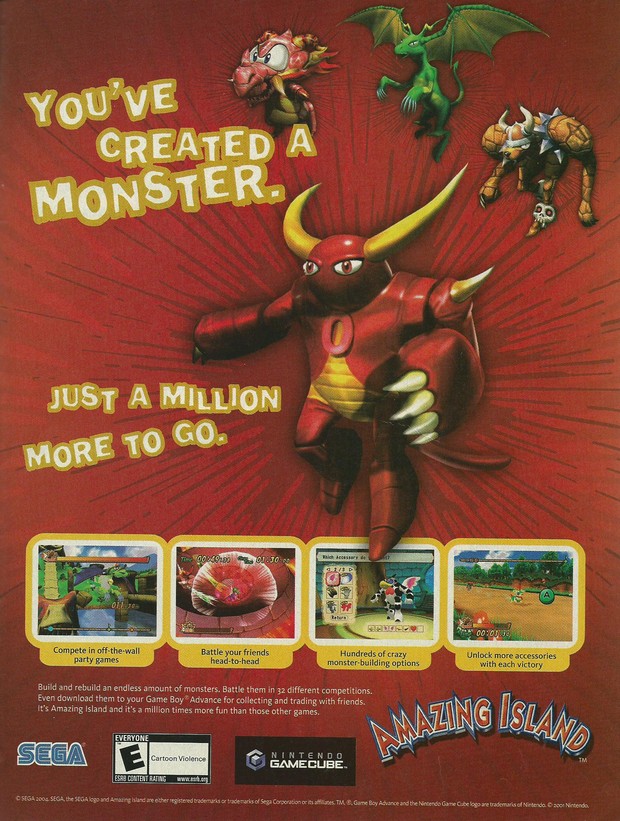 I've never played this one, but it looks like a Pokemon-esque monster collector/fighter. 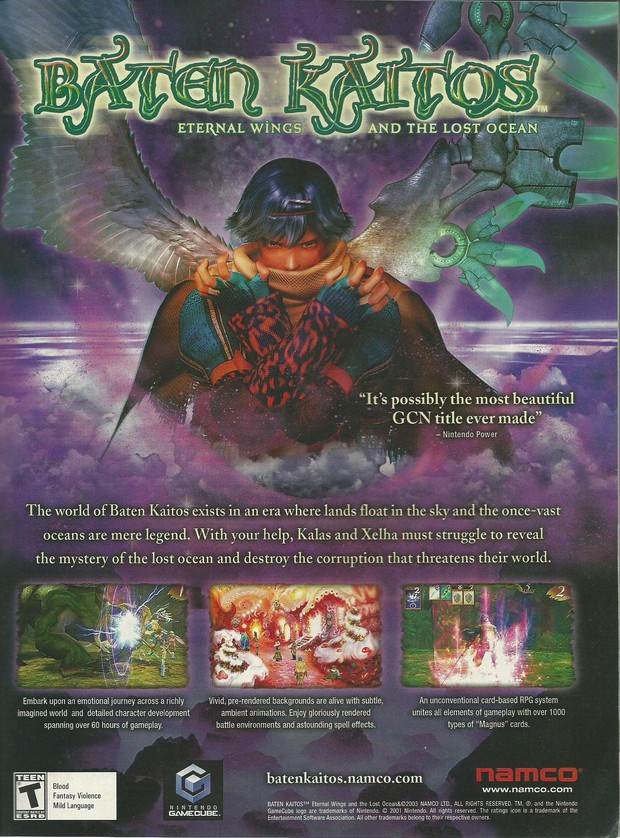 I don't have much experience with RPGs on the GameCube, but titles like this look interesting. I realize this ad is basically the box art, but it sure looks nice. Really rich color. 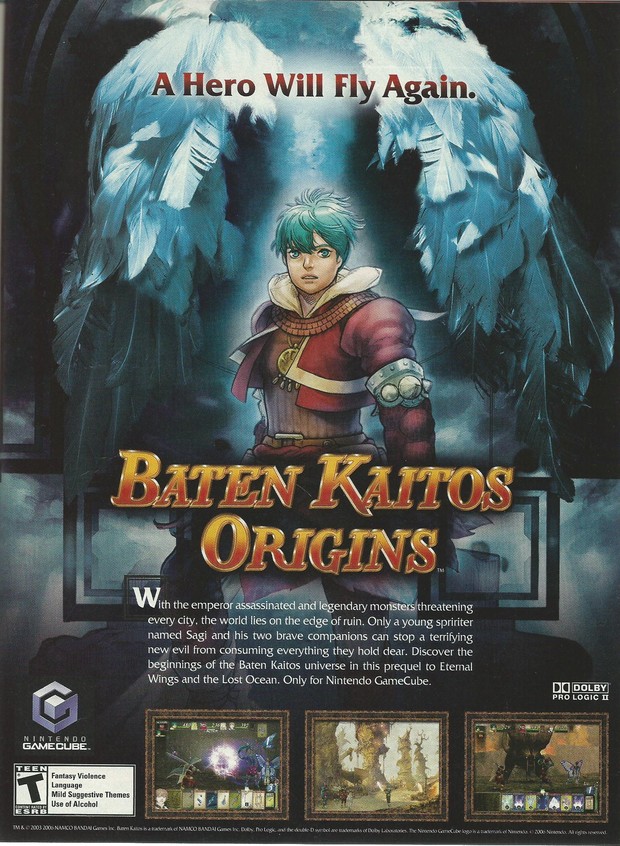 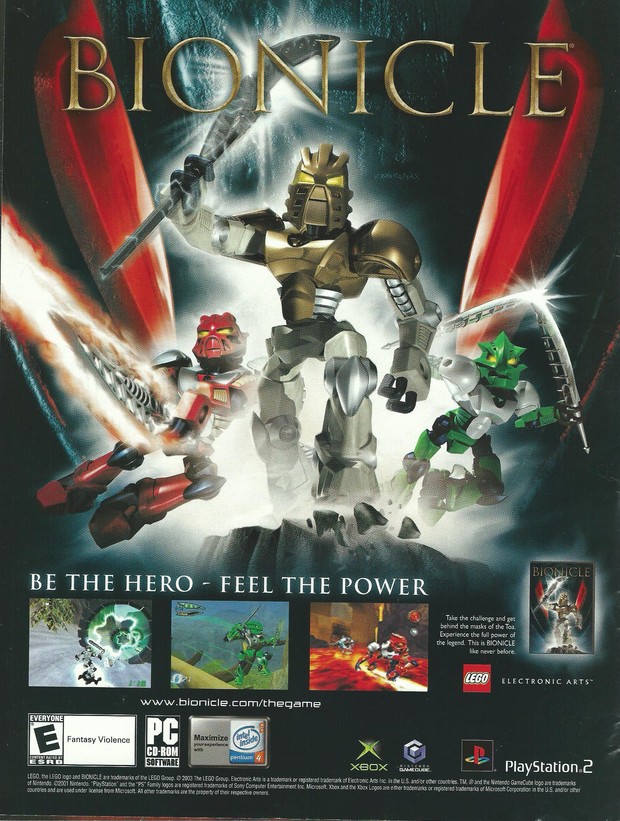 Looking back, this game was pretty linear and by-the-numbers, but I loved it as a kid. It came out when I was obsessed with Bionicle, collecting all the figures and reading the comics and whatnot. I'm sure the nostalgic illusion would break if I tried it again today, so I might just leave this one as a good memory. Also, Lewa was the best Toa. 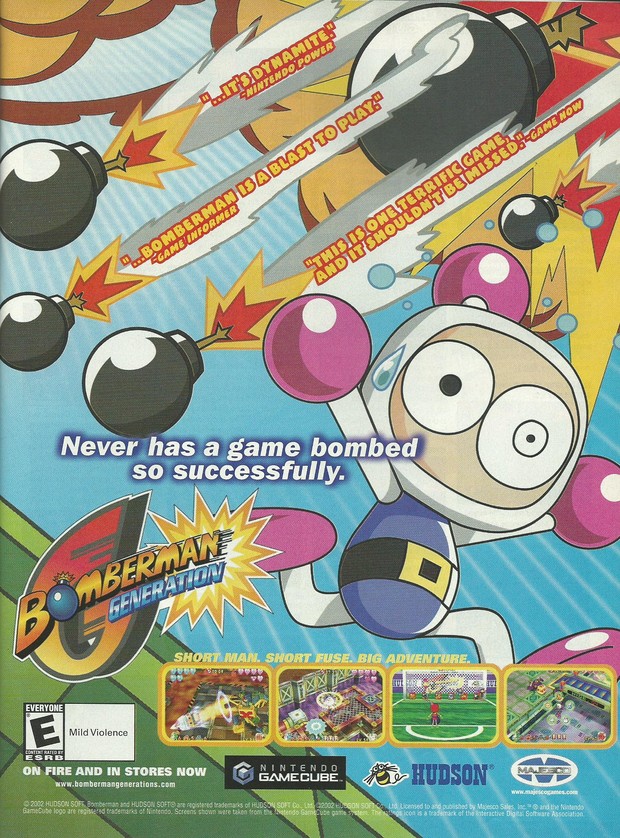 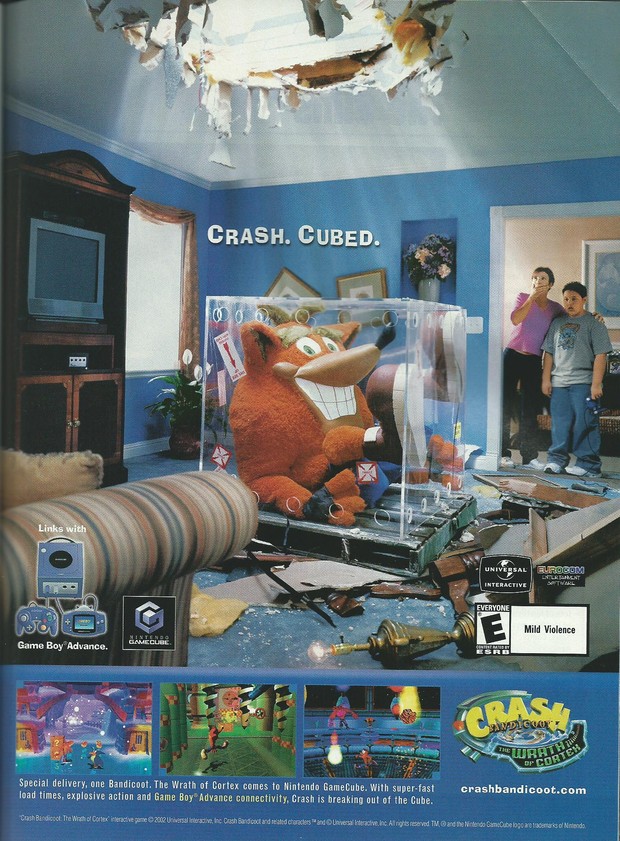 If I recall, there were a few commercials in the early 2000s with a life-sized Crash Bandicoot like that. They were... slightly frightening. 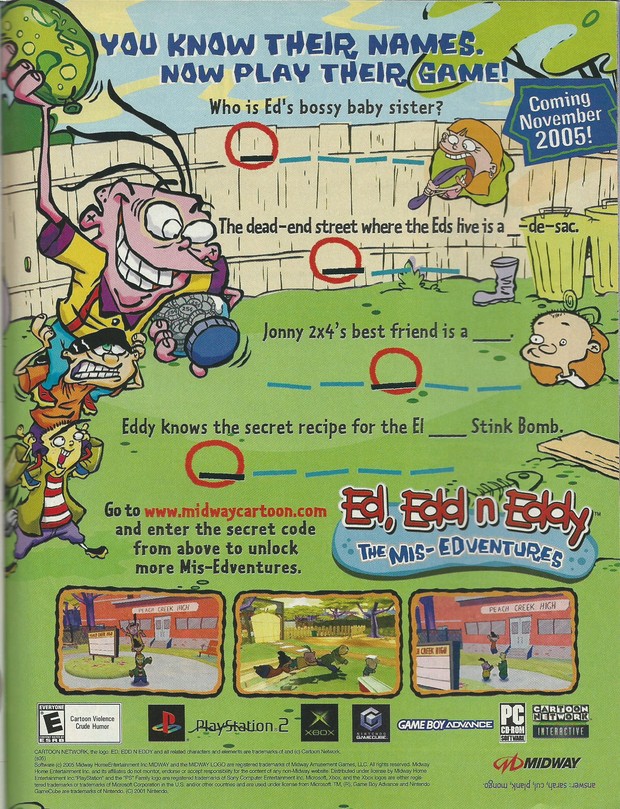 Another childhood favorite of mine, both game and show. One of the most bizarre cartoons I've ever seen, and I loved every minute of it. Can anybody else crack the code? 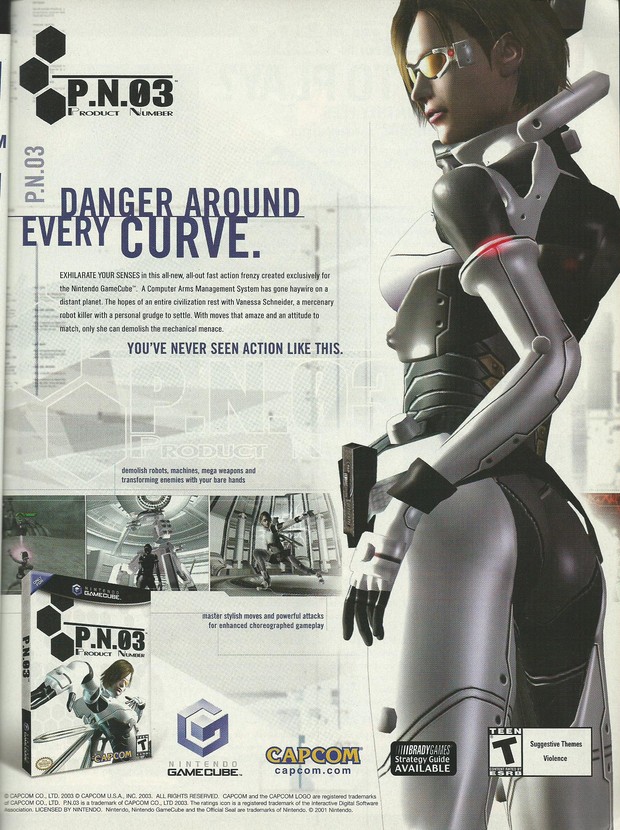 You know, she reminds me of a cross between Chell and GLaDOS. The color scheme on the armor is definitely GLaDOS. 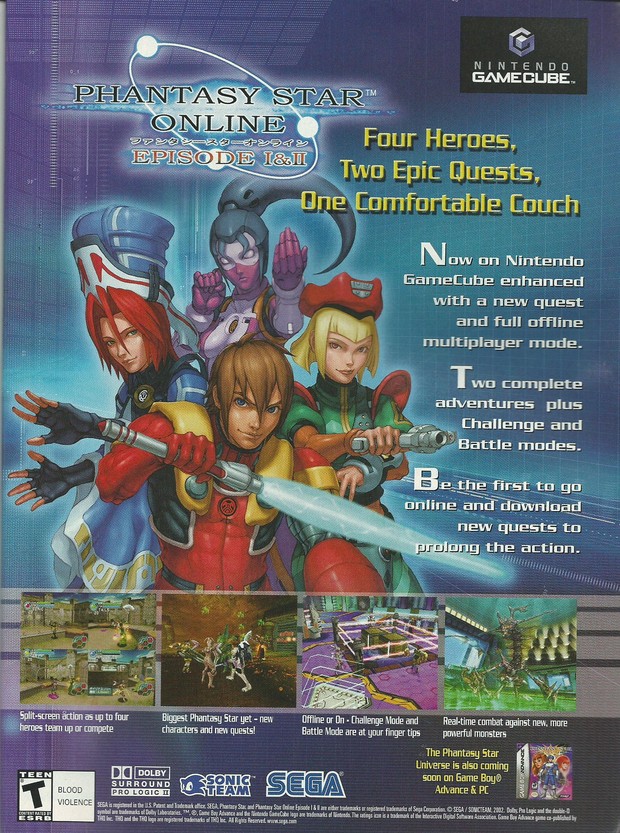 I heard that it's still possible to play this game online, albeit on private servers. I think it's awesome that there are fans still keeping online games like this alive, especially on consoles like the GameCube and Dreamcast. 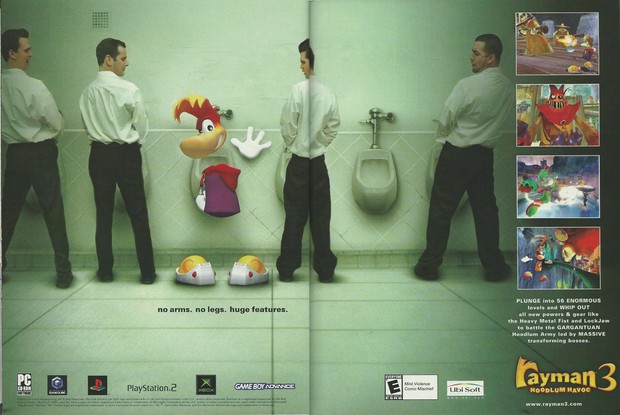 Okay, let's talk about this one. I'm sitting here and I'm trying my best to figure out what is happening here, logistically, because it looks like his dingus is coming out of his stomach or chest area. Unless, of course, it is where it should be, but Rayman doesn't have a lower body. All in all, what does this have to do with the game? 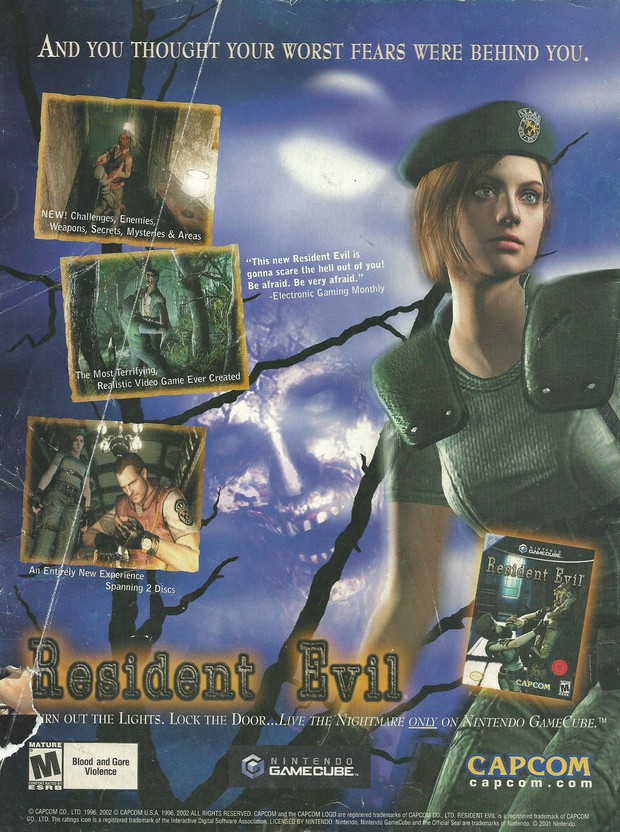 This is the back cover of a gaming magazine I found in a free bin at a used book store. As you can see, it isn't in the best shape. 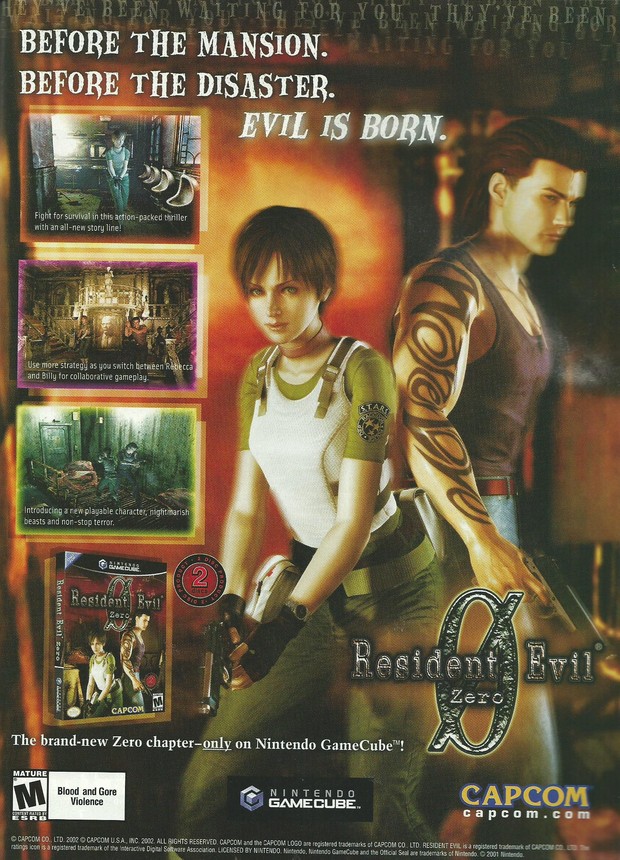 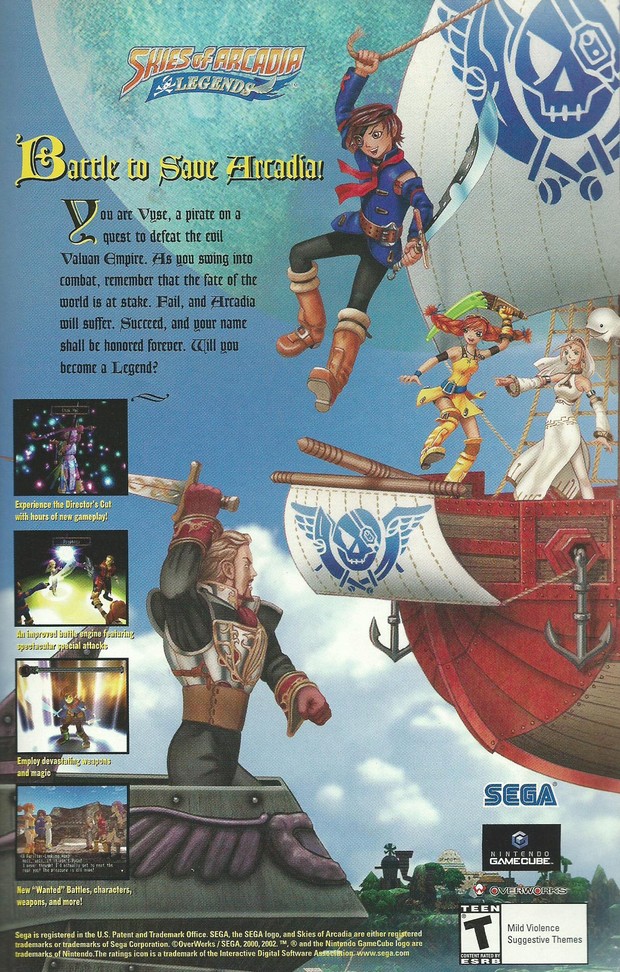 Ooh, another game I really want to play someday. Dreamcast or GameCube, being a sky pirate sounds so much fun. And look at that blobby sky whale thing. It's way too adorable to pass up. 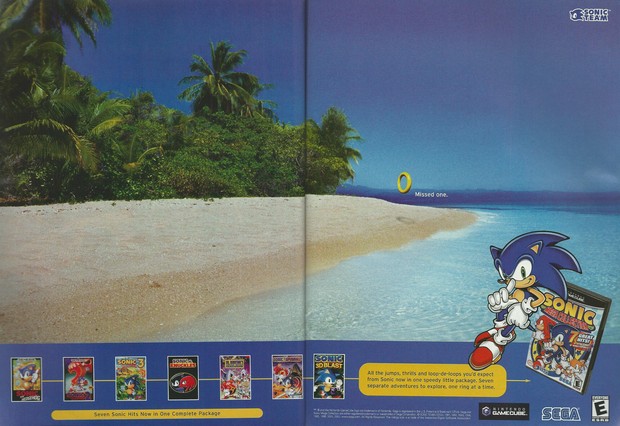 I really like this ad. It's lighthearted, playful, and shows what Sonic is all about: going fast. 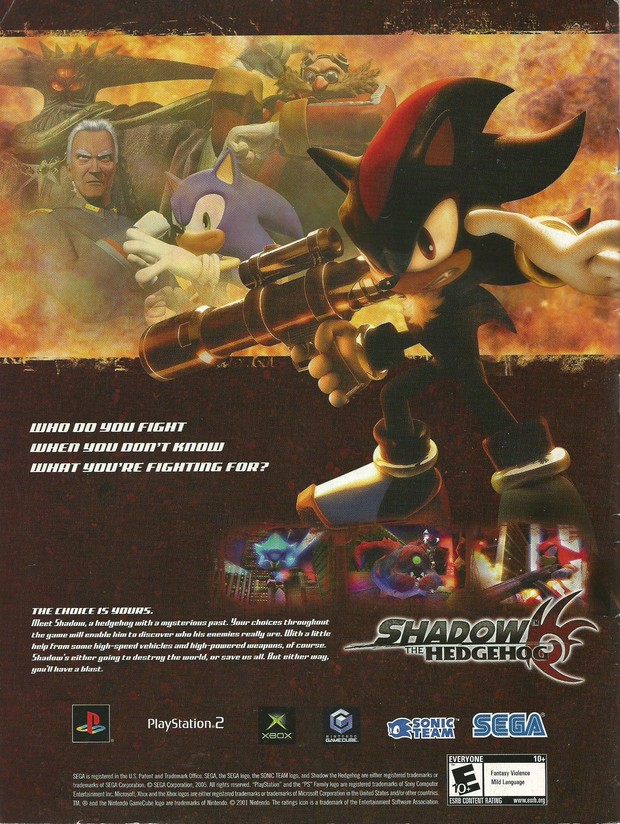 On the other hand, angst. 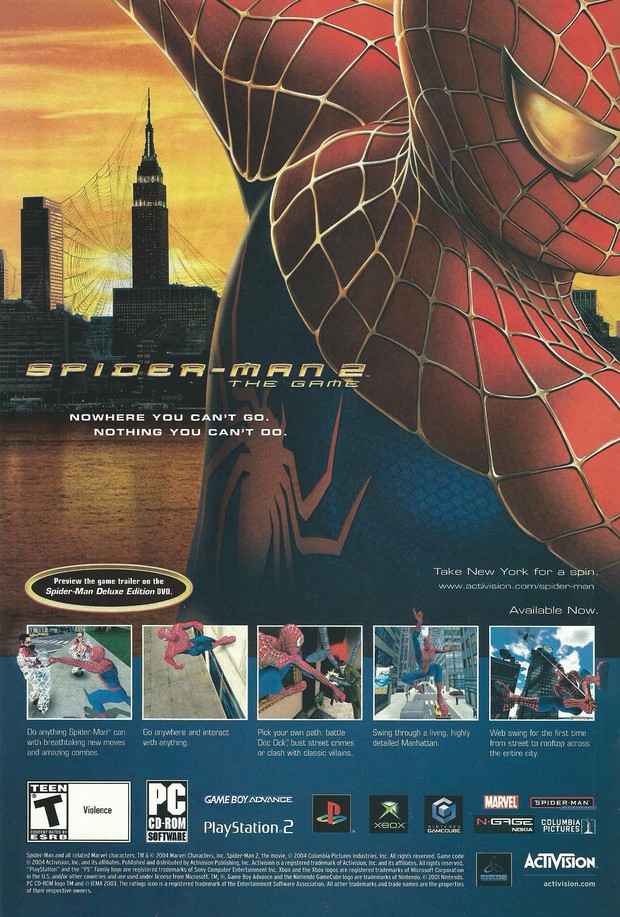 Sorry Goldeneye 007, this is the definitive movie tie-in game, in my opinion. The mechanics were so good, so tight, and you actually felt like Spider-Man. For a long time, this was my favorite superhero film and video game. Near perfection. 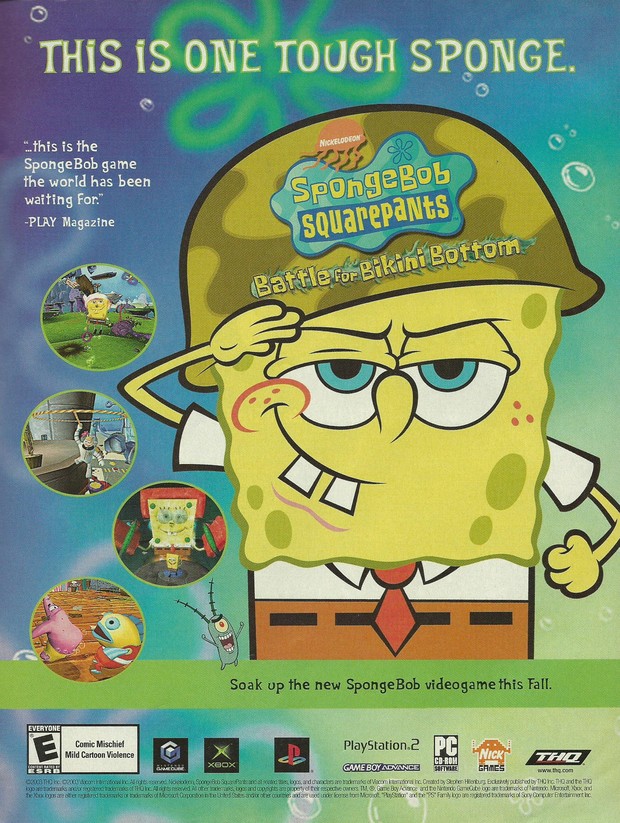 Similarly, this is my favorite TV tie-in game. Back when I watched Spongebob like crazy, this game was so much fun. Switching between characters offered unique play styles and the level design was great. As someone who loves pre-movie Spongebob, this game was perfect. 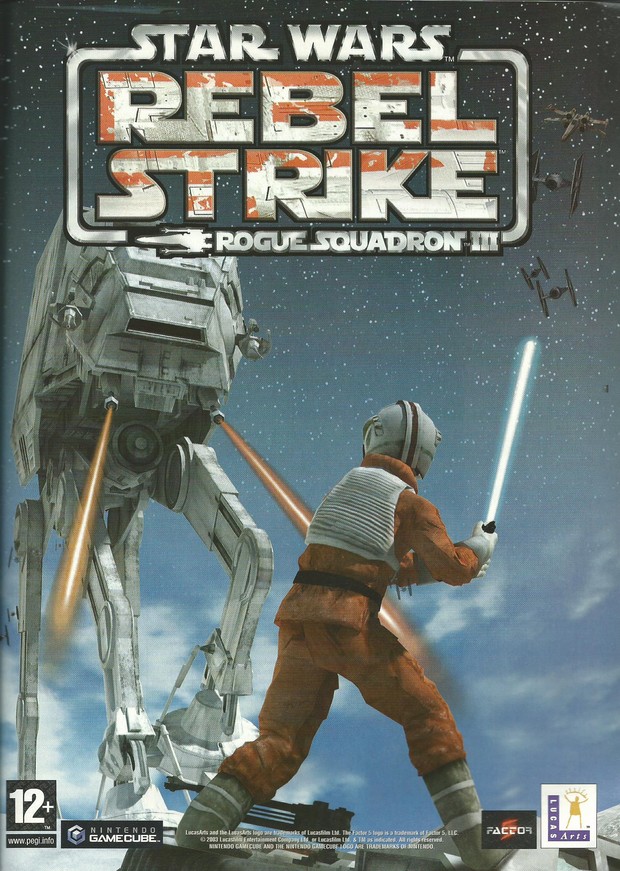 This ad came from a UK sci-fi magazine, the only one I have from overseas. 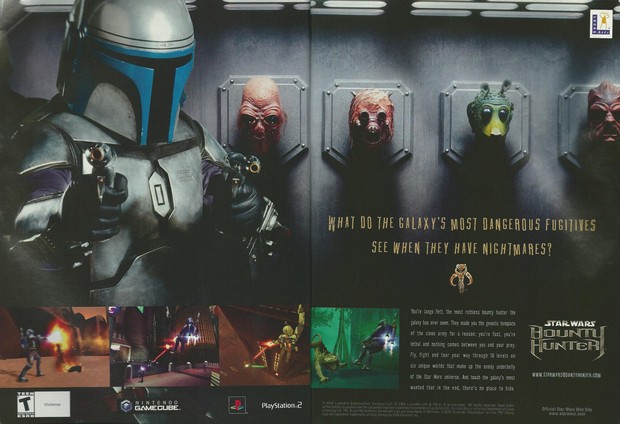 One of my favorite Star Wars games ever. As disappointing as the prequels were in hindsight, I loved them as a kid, and Jango Fett was at the heart of my obsession. He looked so cool in the movie and his game was great. I played each of the levels so many times that I probably have the level layouts and musical cues memorized. The game had a great arsenal of bounty hunting gear and a decent story, too. 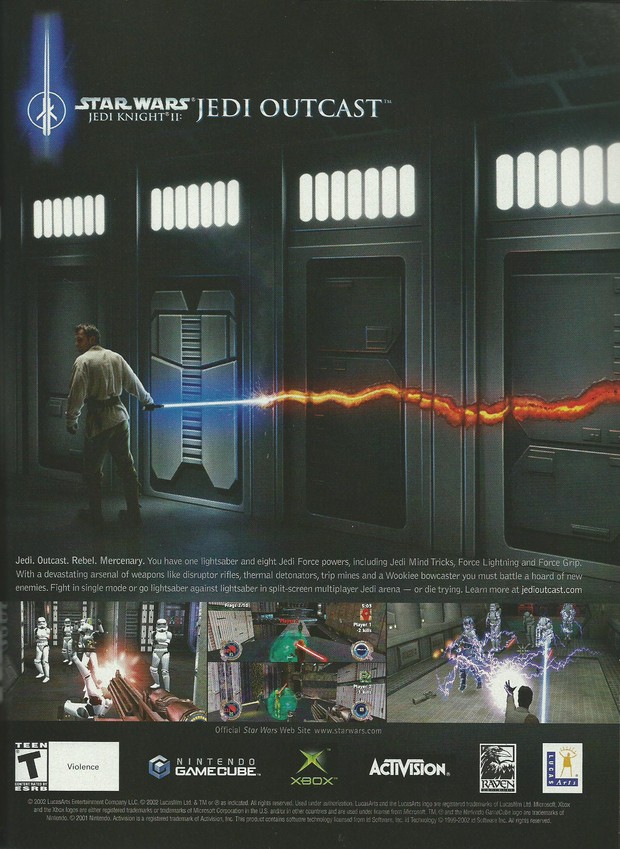 Like a kid running a stick along a wooden fence, but with, you know, a lightsaber instead. 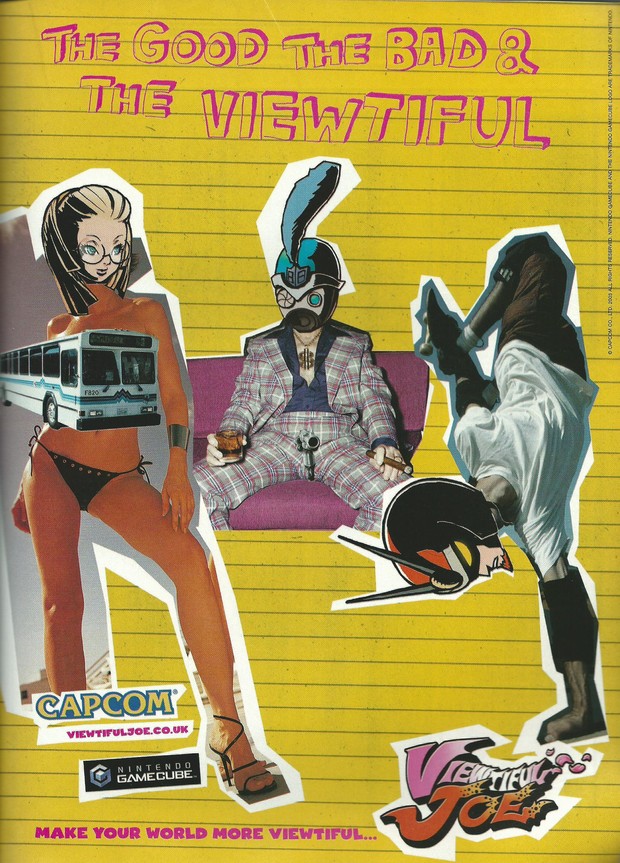 As someone who has never played Viewtiful Joe, I have no idea what is happening here. 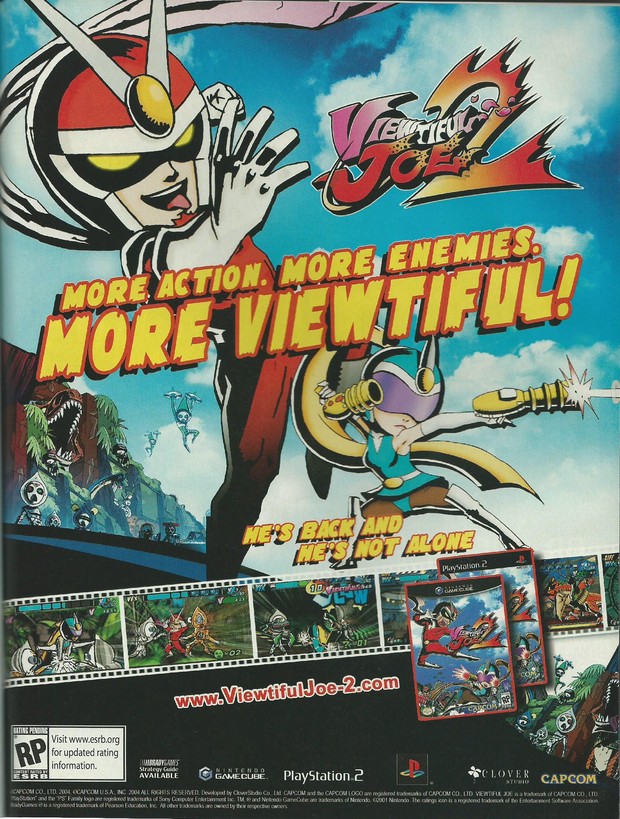 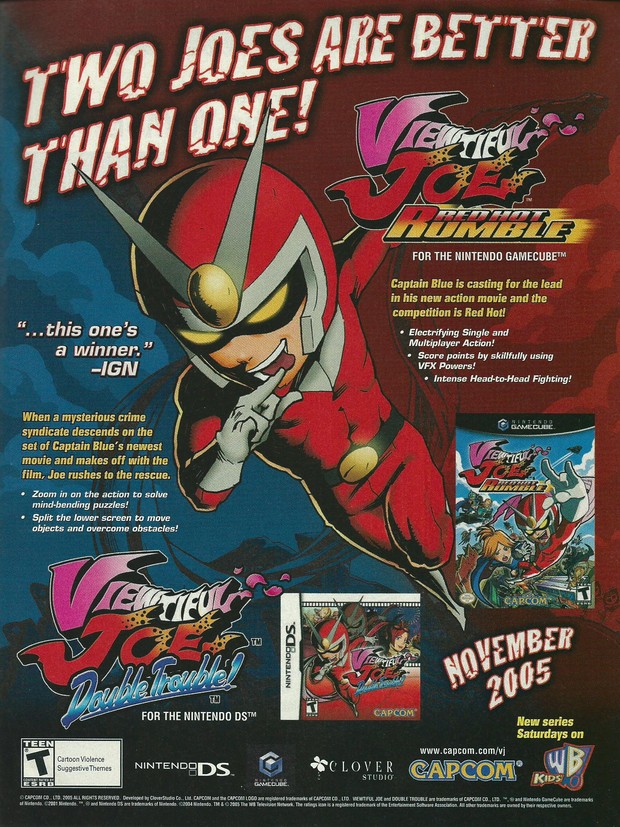