Better with Age: The Legend of Zelda: Ocarina of Time 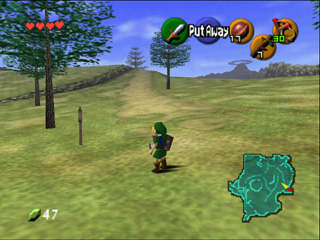 If there's one game I continually revisit at least once a year, it's The Legend of Zelda: Ocarina of Time. In my mind, this title is the quintessential action adventure game. It has everything; a gripping story centered around the simple concept of the struggle between good and evil, mentally challenging puzzles that require actual thought, emotive and dramatic cutscenes, incredible music and atmosphere. Not to mention some of the most engaging and terrifying encounters ever put to pixel. Remember how tense trying to complete the side quest for Biggoron's Sword was? Remember running into a ReDead for the first time? I do. I always will, because the suspense in those few seconds where you are literally paralyzed have stayed with me for at least 14 years.

I remember when I received my Nintendo 64 from my uncle at around 11 years old. I had two games; Super Mario 64 and OoT. As much as it shames me to say, I hardly ever touched SM64, but not through lack of interest. The fact is OoT was so gripping, so intense and so memorable that it's one of the few games I can honestly say I literally couldn't put down, and that wasn't just because of the game itself. One of the main reasons that OoT is so memorable to me is the fact that I played it through time and time again (heh) with my mum. Never as adamant a gamer as I have always been, my mum would staunchly sit by my side and help me through the game at my tender age, reading snippets from an old tattered guide my uncle had inadvertantly left along with the console. It would be years before I realised it, but that time spent with my mum was immeasurably precious.

Don't worry, she's still with us. It's just that when I got older and moved away to university, obviously some of my thoughts were of home. As I was away studying, I decided (rather naughtily) to download an emulator and boot up OoT for old time's sake. I was older now, I could figure out the temples and I had a much deeper appreciation for the story, the music, the complexity of the puzzles and a much greater sense of satisfation upon completing it. I took a more patient and strategical approach to the combat, which was and still is immensely enjoyable. However, something was missing. Then it hit me. My mum wasn't with me, she wasn't there next to me when I finally went back and beat the game after so many years. It was a hollow victory. Something about it felt wrong. We had been on that adventure so many times and she'd stuck by me through all my tantrums and been so patient in explaining the story and reading the guide out to me. In the end, beating it without her just felt off. She had become as much a part of the game as I was.

It was then that I realised how important bonding is and that it could be done over literally any medium, all that counts is that a bond is made. For me, OoT gets better with age because it reminds me of that time spent with my mum when I was growing up and it's one of my fondest childhood memories. It's funny, the things that make you realise how important family is. For me, it's OoT and it's something I'll cherish forever.