Golf is Hard REVIEW - Yeah, when you HAVE to make a hole in one... 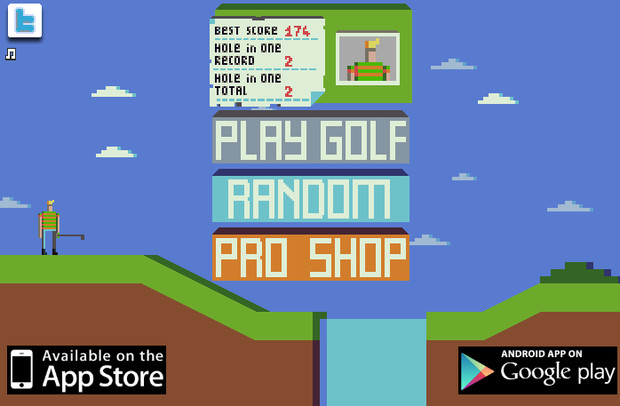 There's a phrase used to describe almost any media, and that is "short and sweet". When talking about games media this means it's a nifty little title that, while providing a good experience, doesn't do so for long. Golf Is Hard is a perfect example of a game I would use this phrase to describe. It's a golf game with one full course, leaving the level total at a solid 18. That's pretty short, even for a mobile or flash game.

Controls are simple, utilizing one button controls. One button press determines the angle of the shot, and the second determines power. Simple yet effective. The system isn't too easy to gauge, allowing for a decent challenge of screwing around with the different angles and forces. It's fun but also infuriating at times, leading to a lot of shots that were you really just wanting to see the ball fly off the screen (far off the screen). 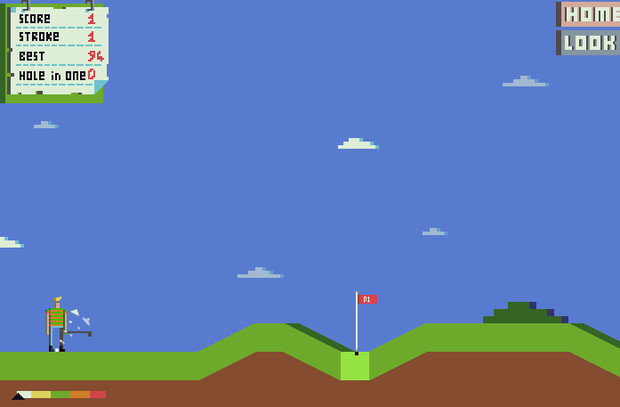 A rather unique thing among golf games that this game does is that it doesn't allow you to "walk on the course", meaning that you have to make every shot from the tee. This also means that while you're constantly messing around with the controls you're at least doing it from one angle, providing at least one aspect of consistency within a level.

It's honestly not as hard as it sounds, as every level is kinda designed around it. Most levels use hills to the player's advantage. The ball loses a lot of momentum once it hits the ground, so it's not too reasonable to expect it to roll a long ways.

Because of this a majority of the levels put the holes themselves within a little indentation, and because there's a bigger chance of hitting that indentation there's a bigger chance the ball will roll down the hill on either side and into the hole, thus increasing the chances of making it it, therefore making it easier. Aside from the levels that don't do that at all. Or do the opposite. Jeez with those levels. 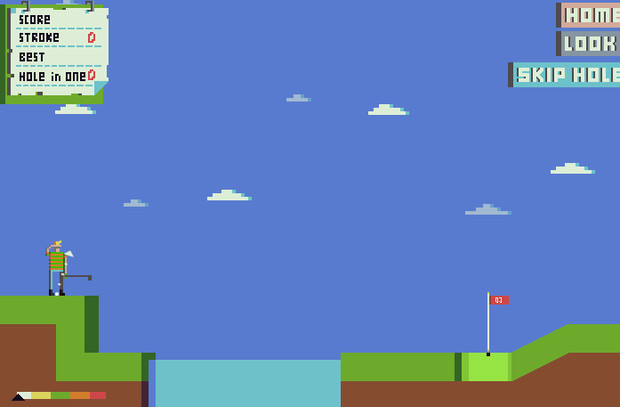 It's not too difficult and the level design is clever enough for it not to matter anyways. With such a short selection of levels, it's no wonder that the two game modes: "Play Golf" and "Random" can both get kinda boring kinda quickly. "Play Golf" is the course going from hole 1 to hole 18, so really just the basic course from start to finish. "Random" is just that, random. Any random hole out of the 18. A major difference between the two is how you can skip the current hole at any moment in the "Random" mode. You know, for all of the rage quitters.

Visually, this game has charm. It's retro art-style reminds me of that of the Atari in some ways and the NES in others. The basic color pallet has a decent amount of contrasting colors to remain appealing, and while it's hard to see at first, there is a 2.5D perspective going on. That's not what defines the charm though. Oh no, what adds to this game's charm visually are the words that make up the title. As you make the holes it'll say the standard Hole in one, Eagle, Birdie, etc. until eventually it'll just say "Golf is Hard", essentially mocking you for your terrible run through of that hole. It got a chuckle out of me.

Golf Is Hard's music department is a weird case for me. The music is an awesome chip-tune + rock band mixture that really inspires you to have fun. Why would this be bad? Well aside from the title screen, the music dips in and out seemingly whenever it wants to. In its leave are the sounds of birds chirping, which grant you has a little bit of charm in its own right. It's just random and can take you out of the feel of the game. 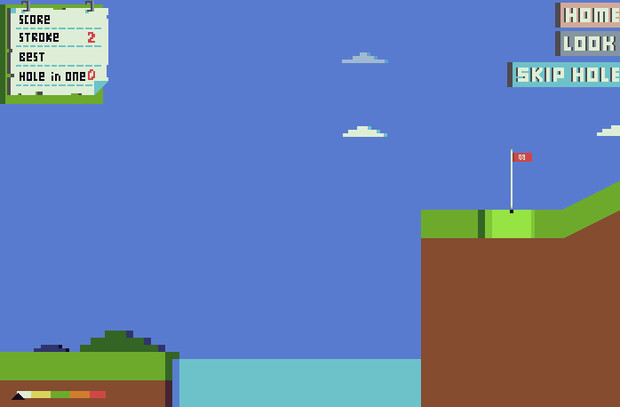 Differences between the mobile and flash versions are little, as there is little in this game. For starters, the animations are better on the mobile version. I guess this is counteracted by the fact that it also has ads. Not an obnoxious amount, but enough of them. I honestly expected for there to be more characters (there are 4 characters. one unlocked from the beginning, and three you obtain after getting 10 hole-in-ones three times) in the mobile version than the flash one but I guess not.

Over all Golf Is Hard is an interesting title. It's a short game, but for the time that I've dumped into it it was worth that time. For those looking for a quick golf game, this is a decent play. If there's a second game I really hope it's named Golf Is 2 Hard. That'd be fun.