When Marnie Was There: A Film Review

When Marnie Was There is a striking, emotional tale of isolation, depression, friendship, and love. The film centers around a girl named Anna, who lives with her aunt and uncle in the city, but moves out to the countryside to ease her asthma problems. As is apparent from the opening schoolyard scene, Anna doesn’t have any real friends, often spending most of her time drawing by herself. Though others act friendly toward her, she isolates herself, which perplexes her aunt, as the girl used to be bright and lively when she was younger. 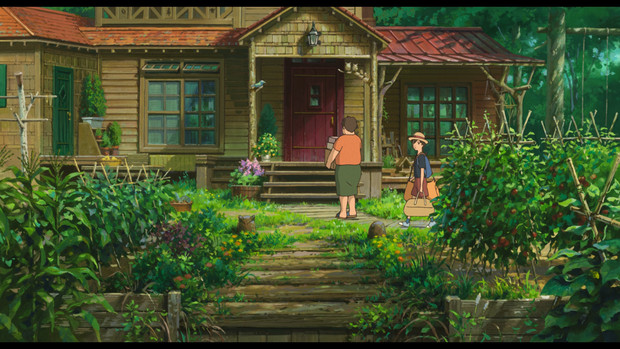 So, Anna goes to live with some distant relatives in the countryside, where she can rest and have time to do the things she enjoys. Though her relatives are amply accommodating and local girls try to befriend her, Anna prefers to be alone, which she hates. In one of many touching emotional scenes, Anna weeps on a lakeshore, recognizing that she doesn’t do well with others, but feels powerless to change. Though she hates being alone, it is familiar. 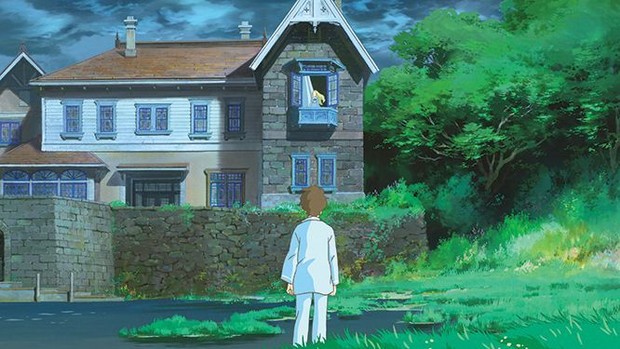 Then, she meets Marnie. As the film progresses, Anna becomes enthralled with a rundown marsh house on the other side of a lake, which looks like a veritable mansion. After dreaming of seeing a girl through one of the windows, Anna rows across the lake and finds a strange girl named Marnie. The mysterious girl is bright and cheerful, making Marnie feel welcome. As the two begin to regularly visit one another at night, their relationship blossoms, as Anna feels that she has finally made a friend and has someone she loves and cares about.

From the start, the film presents a series of mysteries which slowly unravel as it progresses. Anna lives with people she calls her aunt and uncle, but it isn’t clear how they are related or what happened to her parents. It becomes obvious that Marnie is a ghost, because when her marsh home transforms at night, the previously-empty house and its residents look like something from another time. Record players and styles from years ago are prominently displayed as Anna easily stands out with her modern clothing. Also, why does Anna feel as though she already knows Marnie, even though they had never met before? 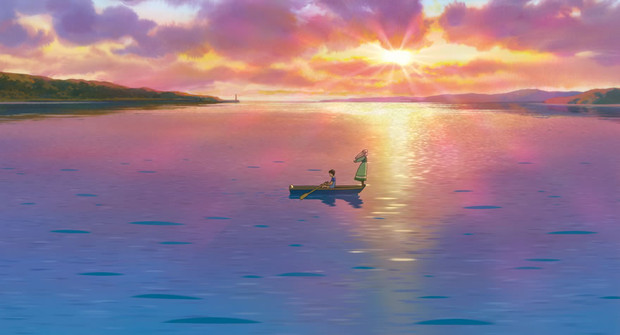 As you would expect with a Studio Ghibli film, the visuals look gorgeous and are bright and lively. As Anna travels to and explores the countryside, you almost feel like you’re there with her. Houses are crammed with exceptional detail and the nature scenes are downright beautiful, especially scenes out on the water in the mornings and evenings as the water reflects the bright colors of the sun. One scene in particular centers on a local festival and feels much like a school or community function you might have gone to as a child, albeit in a different culture. As such, the world created in the film is welcoming and bright, engrossing the viewer with a plethora of detail.

The music complements the introspective, quiet nature of the film perfectly, with light orchestral arrangements providing a soft accompaniment to the day-to-day wanderings of Anna. As one of the few Ghibli films I have seen in theaters, it was a definite plus having a high quality sound setup. The simple sounds of nature were heard perfectly and even the soft, crunching sound of footsteps in the sand sounded real and pleasant. One scene in particular features a strong thunderstorm blowing through the town and every crack and peal of thunder feels close and threatening.

Though I love to death the Ghibli films of whimsy and adventure, there is certainly a place for their more introspective, down-to-earth pieces. Instead of a grand adventure to save a kingdom, the film is about a young girl who grows up feeling alone, which many viewers can relate to. The emotional points, the moments that really made me tear up, were real to life, things which many people have struggled with: identity, loneliness, love. As they open up to one another, it becomes apparent that Anna and Marnie are more alike than they realize, and have their own struggles and pains to contend with.

I won’t talk too much about the ending, but I will say that it made me feel happy. The film felt like a companion of Spirited Away, though on a smaller, more personal scale. Both Chihiro and Anna have dealings with the supernatural. At the beginning, both trade familiar worlds in the city to homes in rural landscapes. Neither is happy with the way things are, but both come away from their supernatural experiences as more mature and happy individuals.

Ever since the film was released last year, I have loved the theme, “Fine on the Outside” by Priscilla Ahn. The song is personal and softly emotional, perfectly capturing Anna’s life at the beginning of the film. Ahn has a lovely voice and the piano and string arrangements in the song are soft, yet stirring. Anyone who has ever felt alone can certainly relate to the lyrics. So, after listening to the song many times since last summer, it brought a smile to my face to finally hear it on the big screen. Yet, the song seems oddly out of place. By the end of the film, Anna has grown as a person and she leaves the countryside content and you know she will finally be happy as she returns home. Yet, the lyrics talk about loneliness more visible at the beginning of the film.

As the credits rolled and the song complemented beautiful scenes of nature, it finally hit me that this very well could be the last film from Studio Ghibli. I heard the news last summer, yet it didn’t feel quite real until the film neared the end, that as it faded to black that it was over for good. In that regard, I suppose the sad nature of the ending song is appropriate. I thought back to the many wonderful Ghibli films I have come to love and appreciate, whimsical films that take you right back to childhood wonder. It was a depressing thought, knowing that such wonderful 2D, traditionally animated films might not be made again.

Yet, Anna felt happy, content, and with a new lease on life. As her relatives happily wish her to come back and visit them anytime, Anna promises to do so. Similarly, we can always revisit the films of Studio Ghibli. Though it might be the end, that does not lessen the enjoyment their films bring.

When Marnie Was There is a stirring, emotional film about being alone, yet finding friendship and love. Every emotional moment succeeds and you truly empathize with Anna and Marnie. For those interested in an introspective, emotional tale, I highly recommend this film.