I Do Not Enjoy Devil May Cry 4 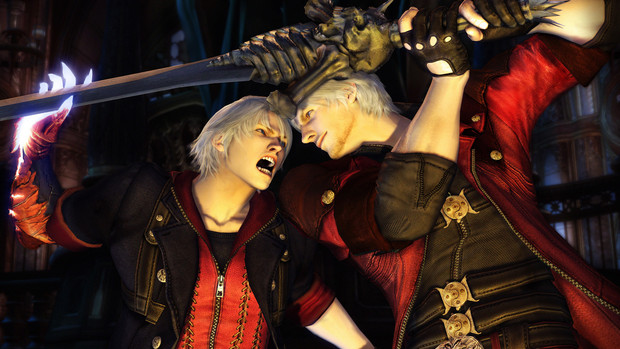 You may notice that the title of this piece is a bit more straightforward and to the point than usual for me. That is for a couple reasons; first of all because Devil May Cry is a series that has always been near and dear to my heart, ever since its first iteration was originally released, so the statement I make with it does not come easily. The second reason is because ever since DmC's release the series has become one that has sparked numerous flame wars in comment sections across the internet and rather than have this piece devolve into one of those I'd like to make it as objective, fair, and understandable as possible. You may not agree with what I have to say, but then I didn't get into writing to sit quietly in the corner and keep my opinion to myself, now did I?

I first played Devil May Cry 4 around 2010 or so, a couple years after its initial release, because that was when I was finally able to afford a PS3. I remember feeling mixed about it at the time but I had such a huge library of games to catch up on with my new system that I just simply moved on from it and didn't really give it much thought. A couple of days ago I found myself in need of something new to play after finally finishing off my platinum for Witcher 3 and decided that since I knew I likely wouldn't be able to afford the PS4 remaster of DMC4 coming out this month that I'd simply go ahead and replay the original release. I did not enjoy my time with it.

Coming back to this game has provided me with one of the most up and down gaming experiences I've had in recent years. There are numerous reasons for this and I'll do my best to go into detail about all of them, so let's start at the beginning. DMC4 is a 20 mission long game during which you play as 2 separate protagonists. For the first half of the game you play as Nero, and while I was iffy about playing with him at first I got the hang of it pretty quickly. He only has one melee weapon and one gun so while that means less overall variety it means he's designed in a straightforward manner and that one melee weapon is reasonably fleshed out. This is good, especially for learning your way around the game. His devil bringer provides some great ways to keep combat fluid with your ability to always keep yourself near enemies. 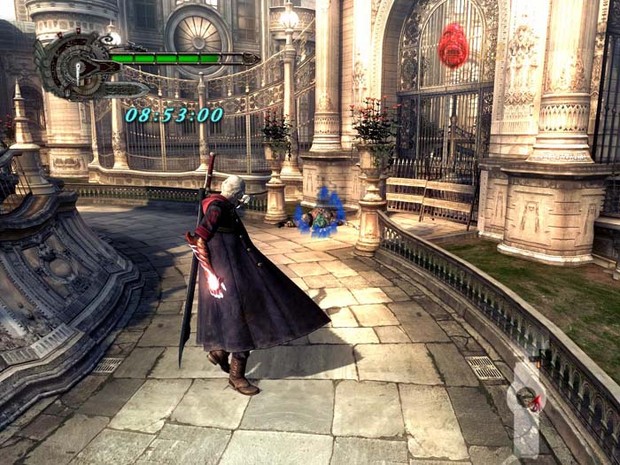 Playing as Nero provides one major flaw though, you're forced to make use of the poor dodge system in place in this game. If you want to dodge you are to hold down the lock on button, press sideways on the thumbstick, and then press the jump button. Fairly straightforward sounding, except for two main problems: the first being that it means you can only dodge left or right and trying to go forward or back will simply result in you jumping like an idiot, and the second being that locking on to an enemy does not place the camera behind your character, meaning that pressing “sideways” on the thumbstick becomes up for interpretation because you have to press sideways from whatever direction your character happens to be facing at the time.

Even were you to overlook the first problem, the second is tied directly to one of the biggest problems with this game: it consistently uses set camera angles. 4 titles into this series and the camera is still being treated as if you're in Resident Evil. Having to fight enemies and do platforming in a game that will change the direction of the camera without warning is simply abysmal. Lock On provides little relief when there are times that, due to the fixed camera angles, you may not even be able to actually see the enemy you're locked onto. Having the camera be behind your character while you're holding down lock on shouldn't be lacking in a game that requires you to press directions in relation to your character's facing direction. Even something as simple as swapping lock on targets can be a chore at times when the enemies are near each other.

Another one of the biggest problems with this game is that the controls are inconsistent across characters and weapons. You spend over half the game playing as Nero, becoming accustomed to his playstyle on levels that are very obviously built around you learning how to use that moveset to defeat enemies as new ones are introduced. Once you make it to mission 12 however Nero is swapped out for Dante; a change many were probably begging for by that point. Unfortunately swapping to Dante provides its own set of problems. 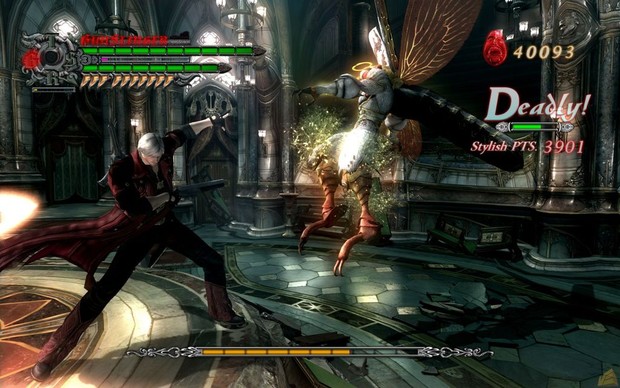 First off his basic combos are inconsistent with Nero's. For example: as Nero you could do an uppercut style attack with your sword by holding backwards and pressing attack, rising you and the enemy into the air, do an aerial combo by pressing the attack button while airborne, and then slam down into the ground with forward and attack. As Dante, you can no longer even perform an aerial combo at all unless you happen to be in Swordmaster style which then relegates the basic aerial combo to the style button rather than the attack button and now simply pressing the attack button at all in the air forces the downward attack. You spend the first 11 of 20 missions being told “this is how you do a basic aerial combo” and then suddenly are told “oh no, now it's like THIS, also being able to do aerial attacks is now a privilege and can only be performed in one specific style.”

Those controls aren't even consistent across Dante's own set of moves. If you swap to his second weapon, a pair of fist weapons, your rising uppercut move is now accomplished with forward and a button press rather than backwards. To perform the exact same move functionally with the two separate weapons you have to do two opposite button combinations. What makes matters worse is that not only are you now over halfway through the game with no idea what your moveset is anymore, the game doesn't even seem to acknowledge that anything has changed. After a single small room of enemies you're thrown into a timed “escape from this place” level against even more enemies than before except now you don't have the major combat mechanic you've been using in the form of the Devil Bringer so you're left to decipher an entire new moveset halfway through the game against enemies that the game presumes you already know how to battle.

And unlike Nero's moveset, Dante's is nowhere near as intuitive. Nero doesn't have a whole lot of variety, but what he has is easily understood. The challenge of mastering Nero comes in actually mastering using those abilities in different scenarios and combining them. Mastering Dante's moveset is more a matter of trying to overcome a poorly thought out control scheme. DMC4 brings back Dante's Style system made famous by DMC3 and it does not do so with grace. 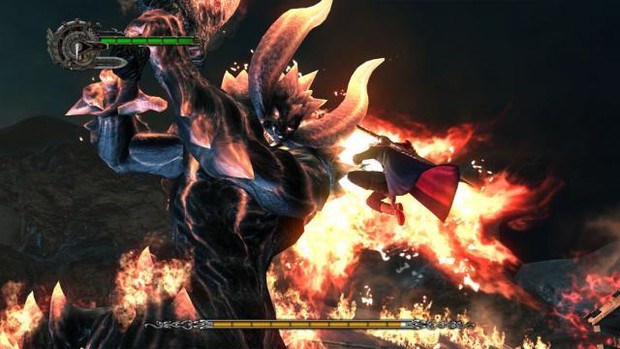 In DMC3 the style system was an interesting idea, but at the end of the day all it did was restrict what you could do at any given time. You could only have one style active at a time, meaning that if you wanted a proper dodge button then you gave up having a more varied attack set. It comes off more like they had a bunch of moves they wanted to implement but couldn't think of a way to properly fit them all on the controller. DMC4 seems to think it's fixed that problem by simply assigning one style to each direction on the d-pad and going “See! Now you can use everything!” It might be fixed well enough if they had at least put more thought into the styles themselves rather than seeking to just copy / paste them over from DMC3.

If you want to keep the style system in place then fair enough, but at least put some thought into how they can be improved rather than going “People liked this in 3 so they'll like it in 4 and that's that.” The idea of an entire style that does nothing but giving you an actual dodge button is ridiculous. Likewise still having the basic aerial combo attached to Swordmaster like it's some kind of secret technique is also silly. Make basic attacks and movements apart of the basic character moveset and come up with interesting things for the styles.

Prop/Shredder is an awesome example of a way to use the Swordmaster style in a cool way, make the aerial equivalent something like Nero's aerial charge attack. Maybe make it so that you can have one defensive style and one offensive style set at a time so that you can choose between dodging and guarding and between swordplay and gunplay. I mean for fuck's sake when you're leveling up Dante's abilities the game literally won't even tell you what you gain by leveling up a particular style. There's a spot for a description but the description is just “Upgrade Swordmaster level to Level 2”. That tells me nothing! I can't believe I'm saying this but I actually had more fun playing as Nero because overall he felt like more work was put into making him a well rounded and intuitive character from a gameplay perspective. 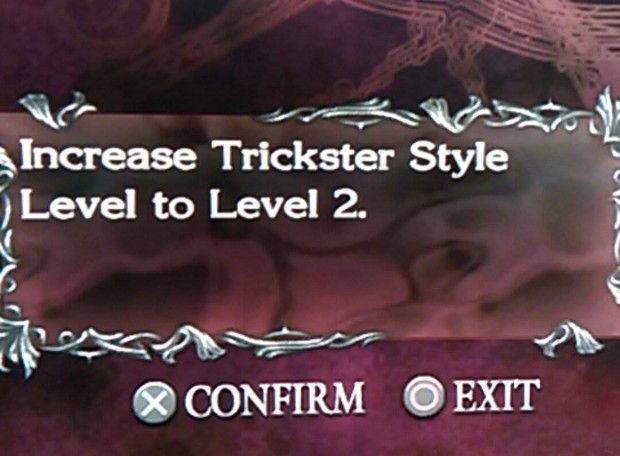 Other problems with the game are those you've likely heard a million times by now. The level variety is severely lacking and when you gain control of Dante all of his levels are just him going backwards through levels you've already done as Nero. The unique bosses are few in number and you're forced to fight most of them 3 separate times. The bosses are, for the most part, interesting at least, with the first (a large fire demon named Berial) actually being the most enjoyable to fight in my opinion as that fight provides the least downtime, but they're definitely not worth having to fight 3 times in one playthrough.

So for better or worse that's my spiel about Devil May Cry 4. A lot of people are excited about its upcoming remaster, but after this replay of it I just don't really want to touch it again. It's a shame going back to a game in a series that you love and having such a sad time with it. The original Devil May Cry was the game that made me realize my love for action games and DMC3 was one of my favorite PS2 games long before the Special Edition was even released. I suppose that's just a part of life though. Hopefully I didn't make you too ragey with this breakdown of the game and if I did then hopefully you at least made it to the end before telling me in angry words why I'm wrong in the comments. I welcome your counter points and personal opinions, so don't be shy. Thanks for reading.