♪ Everyday is great at your Junes! ♪ (June 9th)

I knew it. I just knew it! I did zero battling in these past 2-3+ hours. I could smell a session like this coming sooner or later. However, I'm not even the least bit peeved. As far as hours-long straight of video game story and life sim goes, it could've been much less exciting.

What have you done this past week that was even half as exciting as growing cabbage in your very own backyard? Yeah. That's what I thought.

Oh and I saw Yukiko in a bathing suit.

But, boy, were those some beautiful heads of cabbage. 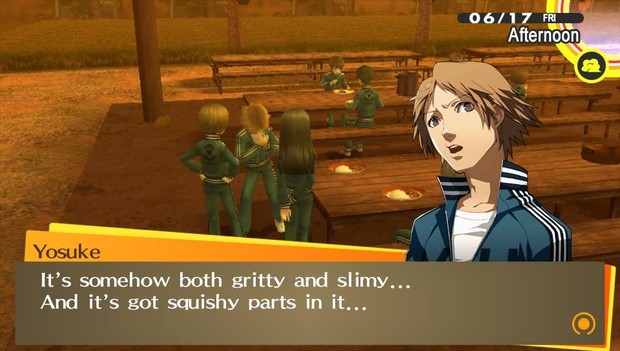 Not even King Yu can handle the gals' cooking, it seems. I was trying to put on my best manface the first time I tried something of Yukiko's, though it seems the game had me fated to kill over from the sheer nastiness of whatever it was I attempted to shove down my gullet this time.

But, did I really have to spit it out like that? Geez. I was embarassed for both of us. Pay no mind to that, ladies. There's a way more capable of a dude behind the scenes. Perhaps they'll remaster Persona 4 once again, after we've implemented taste and smell into our Playstation devices. 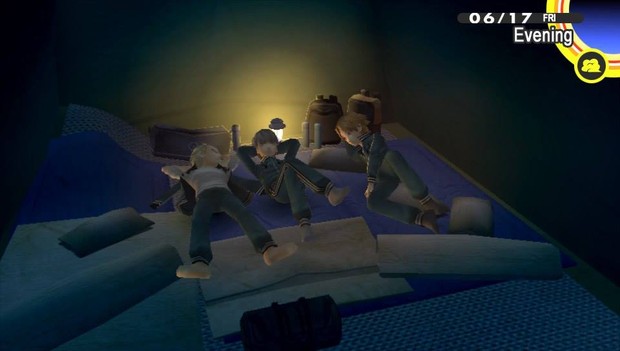 The campout scenes were wonderful for me, but it continued to be quite baffling for our protagonists. Not pictured above, Chie and Yukiko marvel at the audio and visual splendor that is second best girl Hanako.

Not just during the campout, but Yosuke seems generally antsy around Kanji. Worried about whether they'd be safe sleeping in the same tent together because of his assumed interest in men, and I'd like to think it's all just the nature of being young and naive rather than being homophobic. In that respect, it was sort of... "cute" witnessing the dynamic between them three. Just some innocent high school students discussing boys liking boys and why that's maybe a little scary.

Basically, what I'm saying is they really need to kiss already. 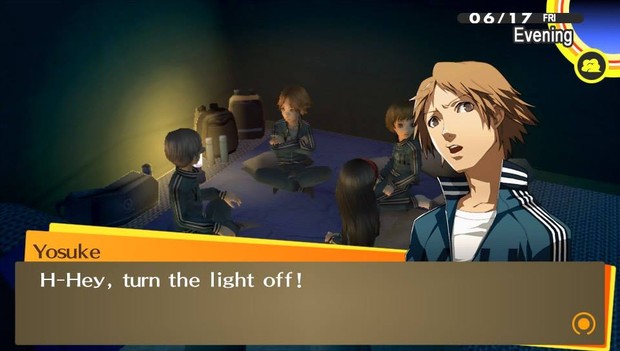 It's like Jurassic Park, but with 100% less Jeff Goldblum and the T-rex is Mr. Morooka.

More on the topic of Kanji's sexuality, I've heard here or there that, even by the end, it's sort of left up in the air and I think that's pretty cool. I mean, it's not like it's all that important, but it does make him slightly more interesting in a way.

It's as if he's no longer repressing these feelings, just simply confused and, as someone who didn't come into his bisexuality until his early 20's, that is something I can even further relate to in Kanji.

I recall a trade of lines between Kanji and his Shadow self...

SK: "What's wrong with doing what I want to do?"

He has no bound sexuality, nothing he's sure of that he wants. It's just that, at that point, he wasn't comfortable with that side of him and, from this, came the blatantly flamboyant Shadow Kanji. I'm really impressed with the way they've handled Kanji as a whole. I think he's still my favorite of the cast. 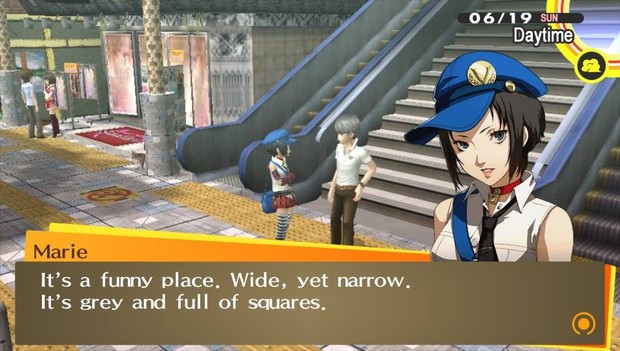 Will you ever stop being so goddamned cute? 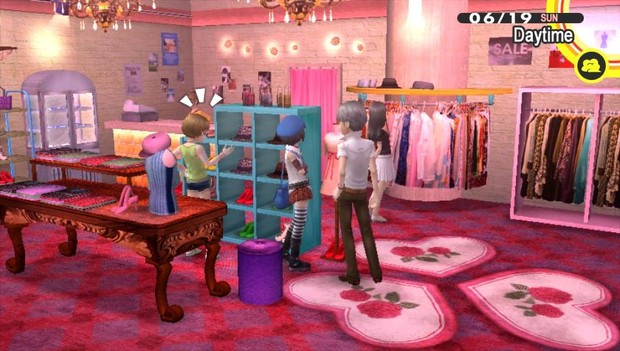 Can I get something, too? 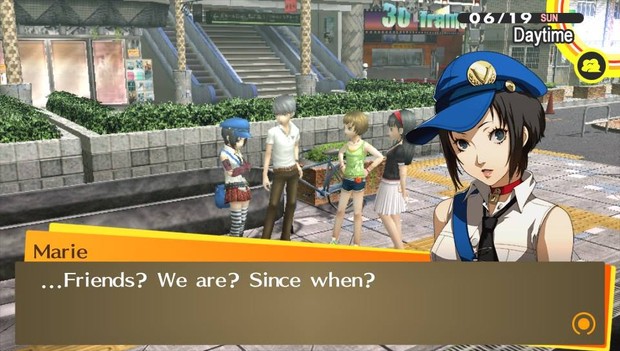 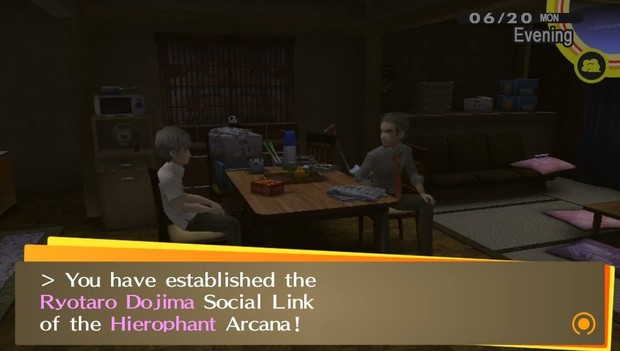 I bend over backwards to keep this town safe from concentrated terribadness, so, under normal circumstances, I would tell Dojima to stick his golf clubs up somebody else's ass. However, I keep warming up to him and especially Nanako. She doesn't like it when we "fight" anyway.

Nanako's every bit as human as the adult characters and as complicated as someone in her position would likely be, while the detective and the father are two contrasts that are clearly frustrating Dojima. Both feel genuine and realized rather than opposable 3D models merely defined by their most apparent attributes. This goes for pretty much all the characters.

Yosuke, Kanji, and me. Marie, Yukiko, and Chie. Me, Dojima, and Nanako. We're all like in our little worlds. These trios are proving to be very entertaining. In fact, if they ever decide to film for a sequel to Mean Girls, I'd be putting in a good word for several of the ladies of Persona 4: Golden. Or maybe another Parent Trap reboot starring Hanako and Risette. 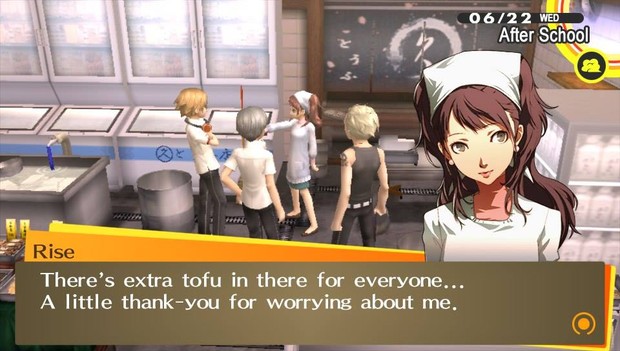 Whom, speaking of which, I just met! 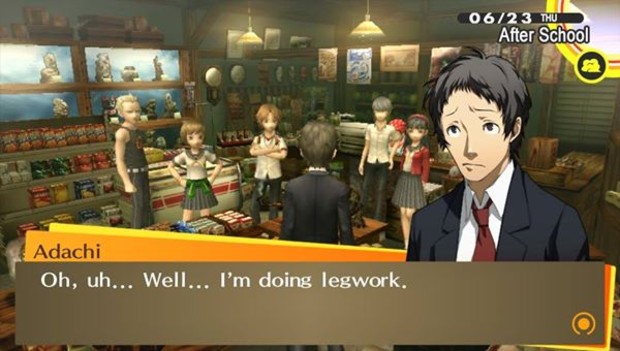 Oh and Adachi is still a nosey arse.

I had a feeling this would turn out to be Rise's dungeon theme. Doesn't quite beat out Border Of Insanity, but it does have some vague simularities and it's a little more interesting than Sauna.

I don't know about you, but I get a little tingly whenever they sample that heavy breathing. Because I know a pretty Japanese lady did that and Japanese women are great. That might get a little distracting. That throbbing bass... 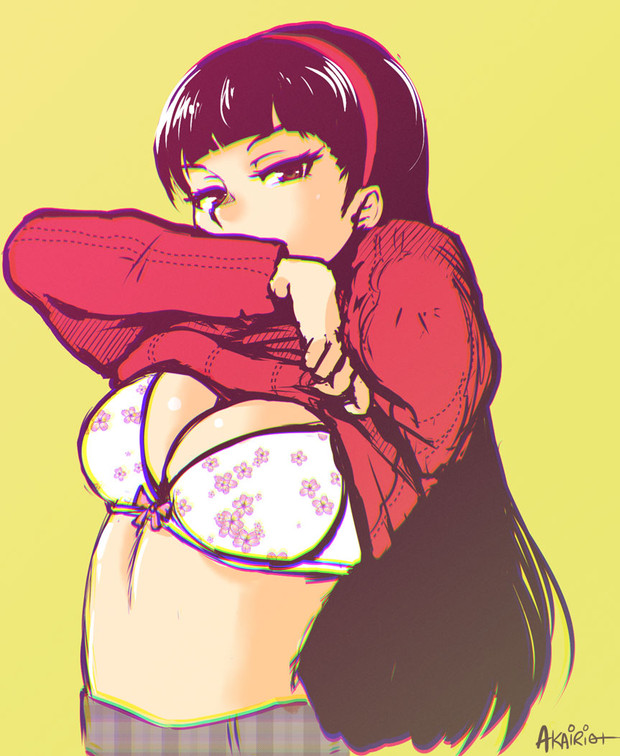 That bra is terribly sexy.

See ya next time (hopefully with some Naoto or Kanji R34 for once)!