♪ Everyday is great at your Junes! ♪ (June 7th)

Dangnabbit. Just when you think you've hit the last floor, another pops up. I'm sweatin' my ass off, here! Who the hell can even afford to keep a bathhouse this size up and running? Where's the practicality in making it over 10 stories high?! Someone, clearly, was ambitious. Though, why set your ambitions towards a freaking sauna?

Why not a hospital with a 36-inch HD television and Macbook in every room? Or an apartment complex with soundproofed walls pre-installed? Or maybe just the greatest ever slushie stand? 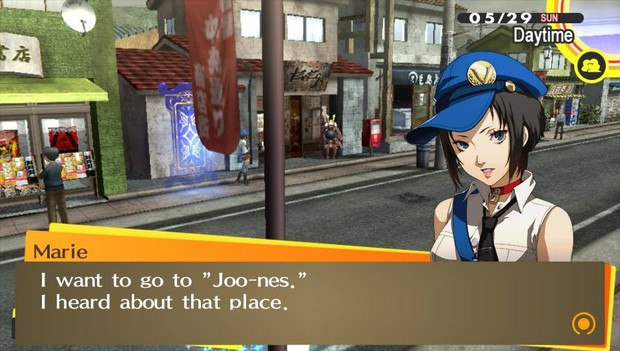 But, let's not be hasty. Before all that, I did some stuff. Like, hang out with Marie again. Because Nekro said that I really really should.

I wonder if she'll have a Shadow self of her quelled "nostalgia" at the tail end of her supposed dungeon, and then cue the exposition spout. All the while, she's probably one of the more interesting Social Links. That and that fox that always goes *yip*.

I've started saying that around the house every now and again. *yip* 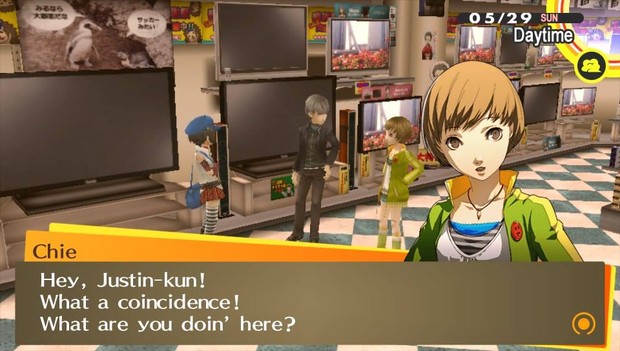 Am I gonna have to take this into the Velvet Room? First Yosuke, now you? Well, at least you're not trying to hit on her. 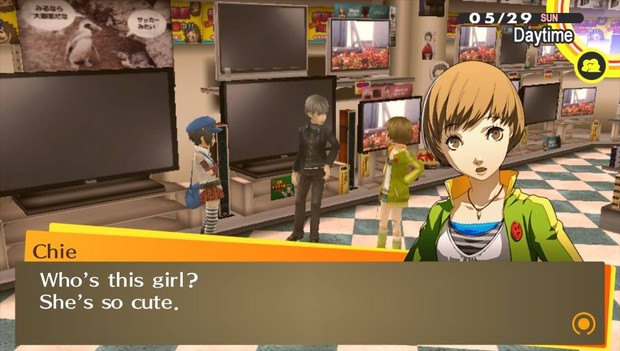 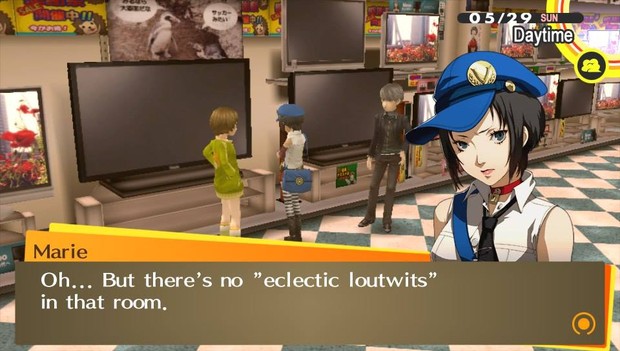 You are... just adorable.

Social Links are, more and more, becoming my center of attention. What seem like such essential Personas are beginning to branch out into all sorts of Arcanas and I'm starting to get really interested in what their skill trees are like. I have a few fusions lined up just for a skill they won't even have until they level up, so why not take it a step further?

This, of course, means more careful time management. Feeling around for which Persona is most relevant, grinding out the Social Link while making sure not to neglect other activities, then fusing the Persona before anything especially dy-no-myte happens within the game's many dungeon floors. Right now, my focus is on my daycare job and it's Temperance Social Link for Nigi Mitama's Diarama and Recarm skills. It's about time I upgraded that puny old Dia.

I figured I'd find the Death Arcana lying with Adachi's Social Link because, well, let's just say that while I don't know all that happens with Persona 4's story, I know some vague details. Mostly pertaining to Adachi, and he has not been exactly subtle about them even given what little I know. 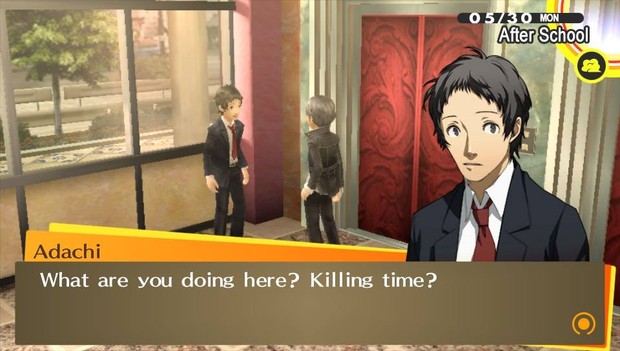 I see what you did there.

I think his Social Link is one of the new ones for Golden, so maybe he wasn't quite as prevalant in the original release. But, in Golden, there's something incontestably awry about his pressence. 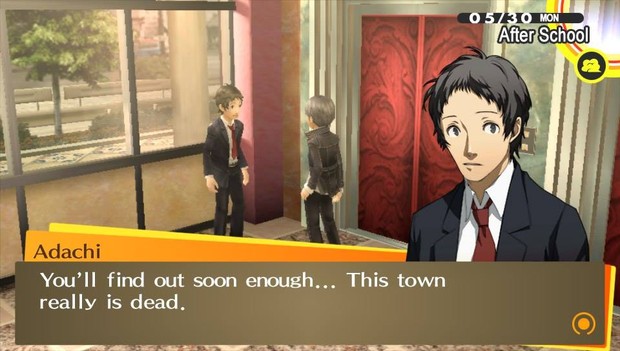 You know the old "hiding in plain sight" schtick? Yeah. That isn't always not obvious. In fact, you've been doing a really poor job of it, Adachi.

Despite your detective moniker, there's no escaping the feeling of being watched and during times when it can't just be a coincidence. You stalk Junes immediately after we start wrecking shit inside the TV, you appear at night immediately after we rescue Kanji, and there are only so many times you can be all "WHOOPS DID I JUST SAY THAT OUT LOUD?" before you start becoming completely and utterly suspicious. And with that, you only recently joined the local police force.

Maybe you're actually an alright guy with a dark sense of humor and a nose for trouble, but I'll eat my shoe if I'm wrong about this. 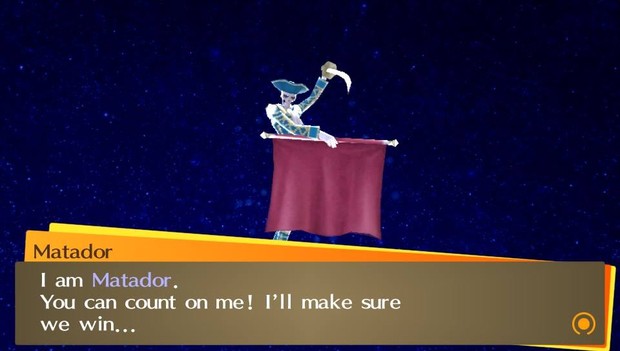 The man, the myth, the legend.

Let's start jumping back into the heart of the matter: Kanji needs a hero. I may not have a cape or tight spandex, but I do have Groucho Marx glasses and an A-Team of Personas to back me up.

Like last time, I did a lot of fusing and made exasperating use of the Compedium. Not only is it demanding, but it's becoming rather expensive. I'm starting to feel really guilty that the only reason I sometimes go into work is for the pay. If these were real jobs, I'd have to be lying about what I was doing with the money and that's rude. "Don't go spending it all in one place!", they say.

If you wanna keep rubbing down glasses and dressing up like an out-of-commision prostitute, that's exactly what I'm gonna have to do. 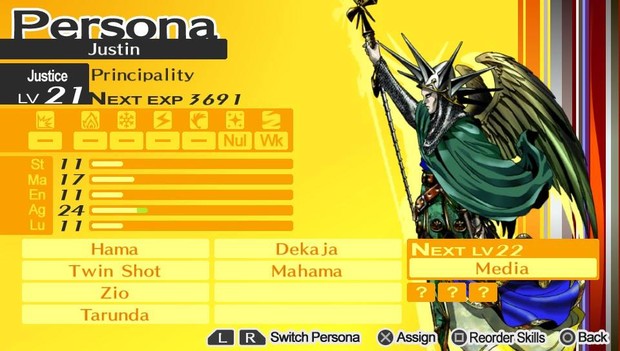 My light in the darkness. 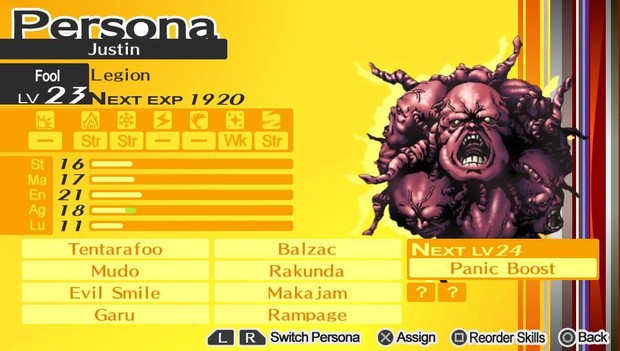 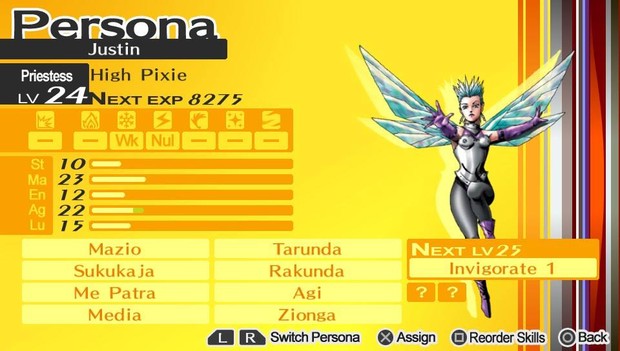 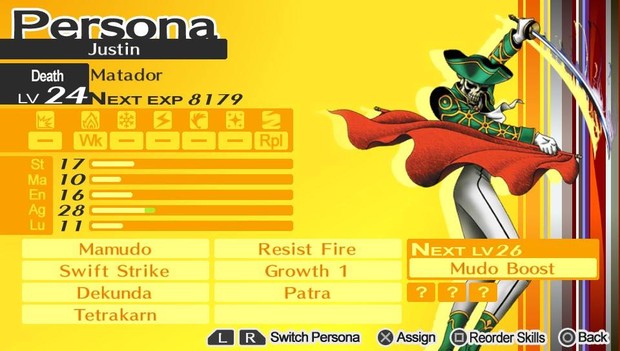 My ace in the hole. 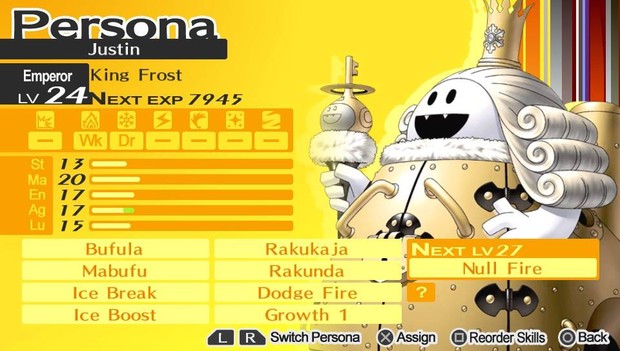 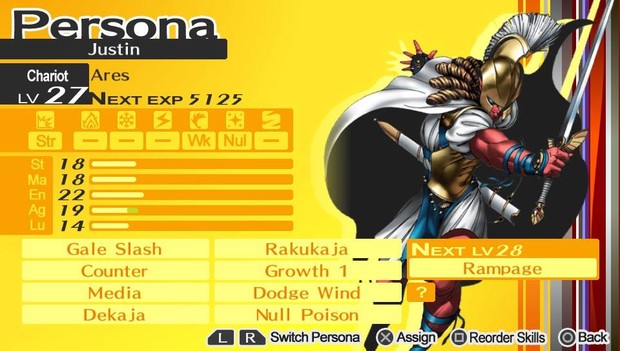 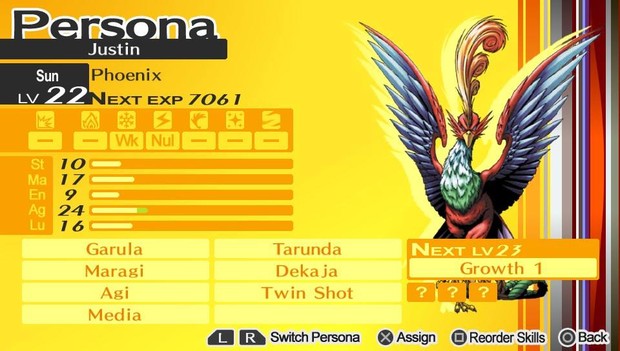 All prepared, I took on the last couple floors of the bathhouse dungeon and finally met up with what was easily the best boss fight thus far.

Both thematically and contextually, it was superb. Though, I admit, part of this is not only from a biased love of Troy Baker but also a very, um... personal bias.

Before I say anything else: I am not what you'd call a "sexist". I see men and women as equals and think no less of either sex than I do of the other. With that said, Kanji's Shadow self spoke to me in an almost downright disturbing way. It perturbed me that much of what he had to say I have actually felt at one point or another.

During high school, I was never the "man" I needed to be in order to stand up to bullies, break normality, or even keep a steady relationship. Most incriminating, I was extremely sensitive. I cried veeeeeery easily. I have vivid recollections of moments where my peers poked fun at me for what they probably felt was a lack of fortitude and what's sad is that, if I were a female, I most likely would have been left alone. 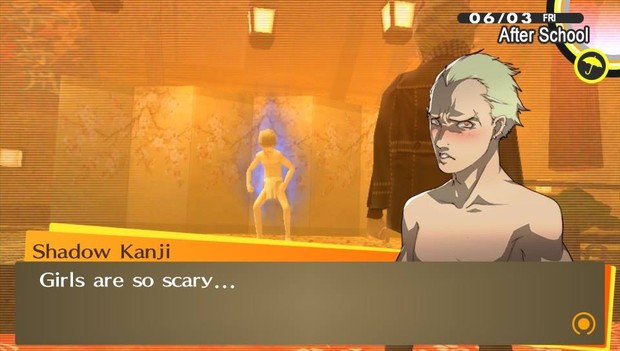 The moment where all this clicked for me was when Shadow Kanji said:

"Men are much better."

I jokingly used this term in my last blog, but that was most definitely an honest-to-goodness trigger. The manner in which it was spoke was a big factor as it was not only passionate but very antagonistic.

It's not that I was even ridiculed by women. In fact, it was mostly men. Despite, being rejected from what little significant relations I've had with women, being (or at least feeling) alone a lot of the time, and growing up finally coming into what would become an acceptance of my bisexuality, my brain was sometimes in a spin. Shadow Kanji was like a manifestation of one of my many lingering thoughts during that time and it was... definitely something else. 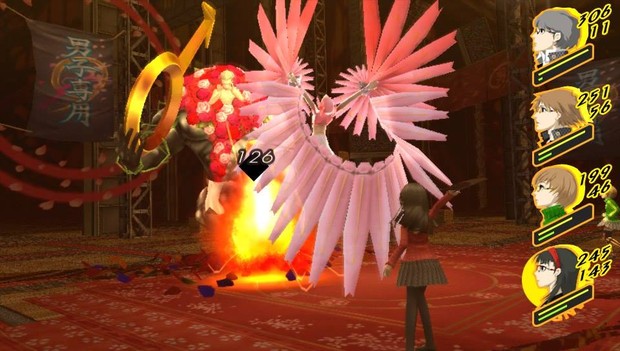 I would have been about as humorous as I usually am in these blogs, but building up to writing and then, of course, actually writing about Shadow Kanji has made me mentally exhausted. Lots of repressed nonsense I had to poke and prod through for material. So, I think we'll end things here. Apologies if this day's EIGAYJ is not up to snuff. 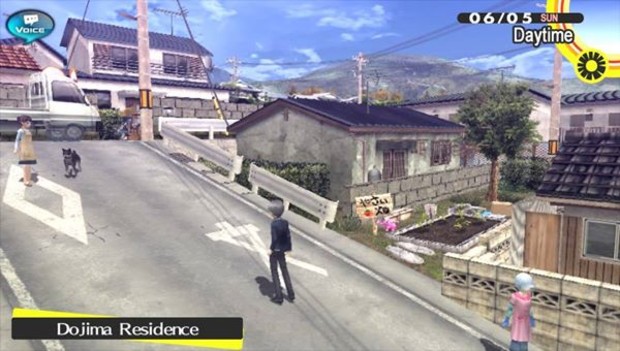 Even though a major plot twist may be totally obvious, literally everything else about this game is getting better everytime I switch it on. I still have a very long journey ahead and I couldn't be more excited to see where this game takes me next.

[Once again, we've come to the daily music and R34 choices!]

I have no idea what you call this sort of music in your part of the world, but, down here, in Texas, I've always referred to it as "Tejano".

As much as I may dog on my hometown and state for being about as exciting as a tofu turkey dinner, there's something very wholesome about the music around here. So close to the border of Mexico, we have plenty of Mexican food restaurants, events celebrating Mexican culture, and lots of construction workers/contractors blaring stuff like what you hear above.

Those unmistakable melodies and progressions. It feels just like home. 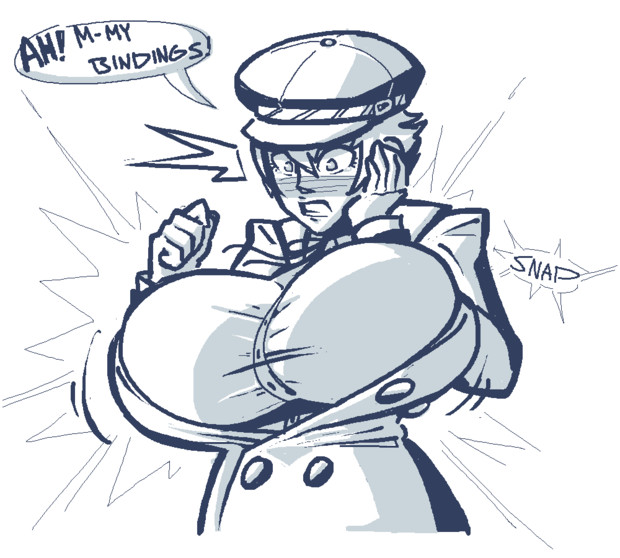 I tried so hard to find some Kanji R34, but to little avail. Looks like I'll have to dig just a bit deeper.