♪ Everyday is great at your Junes! ♪ (June 6th)

[During the month of June, everyday is Persona 4 appreciation day! Comes see for yourself, and get in touch with this latest series of blogs!]

I'm starting to get the sense that here is where the story of the game will begin to slow down for a while and much of my time will be spent either battling or doing side activities. It feels as if I've done more lollygagging in this session alone than much of the whole rest of my time with this game.

I've become so accustomed with my day-to-day that I am probably stressing more over tending to mine and Nanako's garden than I am over making sure to rescue Kanji. After school, you may find me frolicking side to side about the Shopping District like someone had just lit my butt on fire, only to realize that "... oh yeah. There's this guy that needs my help or he's gonna die. I really gotta stop clowning around. We're... 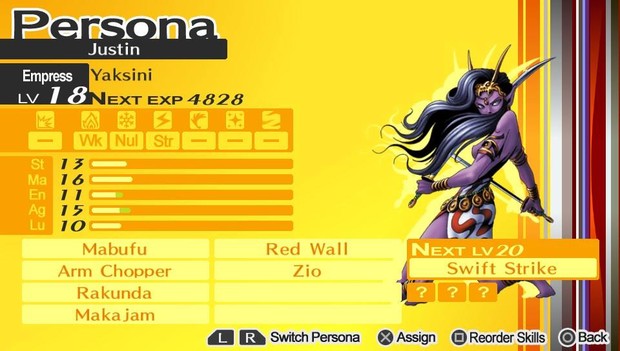 I have a thing for tribal/warrior girls and I've never been one to turn down a lass with purple skin. But, Yaksini isn't just pleasant eye candy. Turns out, she's also pretty damn handy for fusion purposes! I've already used her twice and I just keep coming back for more!

I've done a tremendous amount of fusing this session, actually. Fusing and jotting down other fusions for future reference. It's become pretty taxing. I mean, look at just what I've lined myself up for:

Sometimes I have to hold off from browsing the fusion search and take a few in-game days to calm down. "I'm already going to be plenty awesome. I've got to stop being so awesome at this.". You ever get that? I get that all the time. 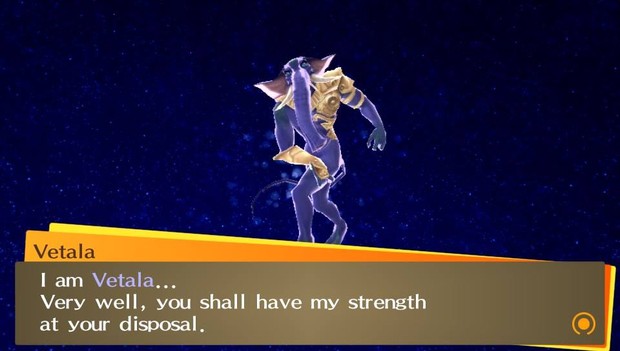 Just don't go thinking you're more awesome than me. 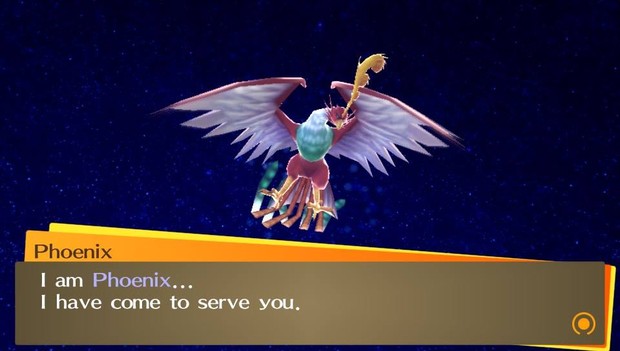 I like you. You seem as if you know your place. 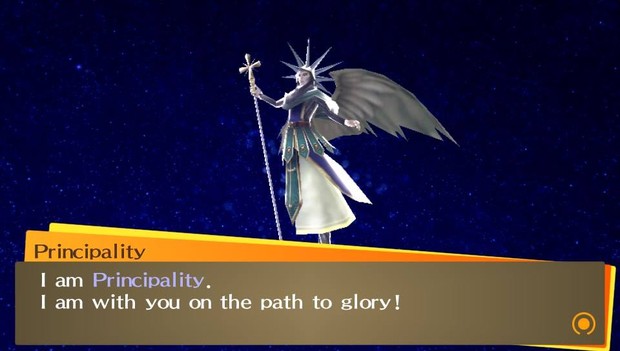 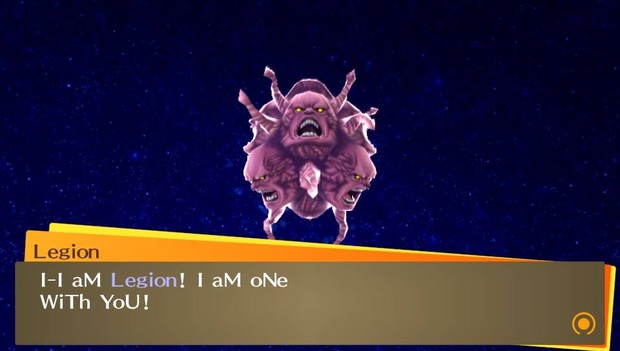 GAH WHAT IN THE EVER-LOVING GLOW OF OUR LORD STERLING IS THAT FUCKING THING?!

I've told myself, time after time, "Save before fusing.". Because fusion mistakes worse than even that mutated bulb of Hulk heads can happen and happen more often than you'd think. And don't forget about registering! You fuse a new best friend and all that work spent grinding out those extra levels and skills will have gone to waste if registering wasn't previously on your mind.

I almost flipped a shit and a half when I thought I had neglected to register Jack Frost, a common Persona in my fusions, before fusing him with some other guys. You would have literally heard something on the news about this the following morning. Thankfully, I had it all covered and all I needed to do was redo walking over to the Velvet Room from the save point inside the TV.

However, I did forget to save before attempting to fuse King Frost. By the time I was in the Velvet Room and ready to stir the pot, I shrugged it off and figured there was no way I'd happen upon another accident so soon after my last.

That arrogance led to this little shit: 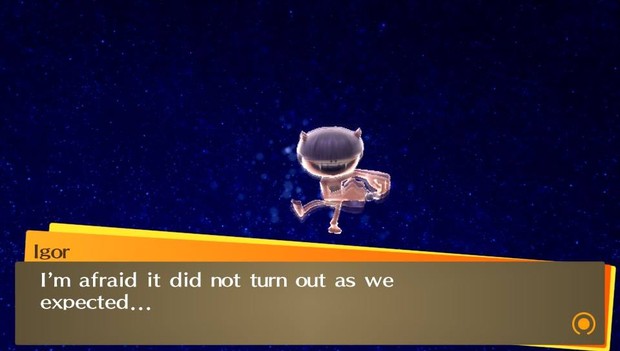 You are absolute garbage. I can't even remember your name. Just that you are fucking garbage and shit and you look like a Digimon, you idiot.

So, I had to redo an in-game day and a floor in Kanji's bathhouse. But, I eventually got my way: 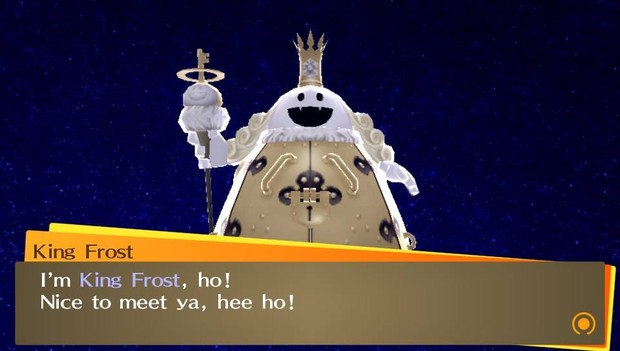 But, ya know what? I still love this fusion mechanic. These creatures may be static, but their stats, fusion combos, skills, etc. can vary depending on how you go about the process. It's like a crafting system, which is already addicting, but with a hint of chess. You're always moving around skills and Personas, thinking way ahead of time, in order to come out on top with some brilliant creations.

It's a hell of a thing to search up what the end-game Personas are like and realize that that's gonna be me at some point.

Besides all that, I finally decided to see what Marie's Social Link was all about. 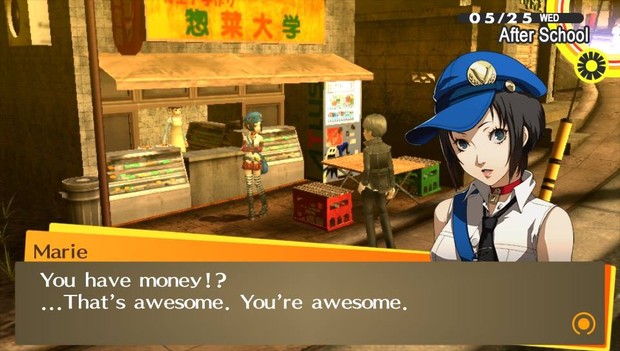 Her naivety over simple subjects is charming. Quick to distress, but easy to please, she's pretty interesting. It's like she reacts with those long mumbles out of a nervous reaction rather than because she actually intended to sound like that. Or it's just that she spends more time writing poetry than socializing that words, like when writing, just start tumbling out. Perhaps a little bit of both.

Then I got peeved when fuckboy Yosuke showed up to crash our lovely, personal time by trying to hit on another innocent lady. 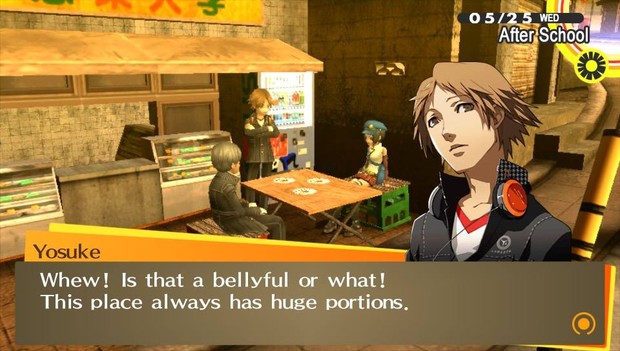 You haven't looked at me straight this entire visit.

I expect you think buying me steak makes this cool? No. You're only covering that candy ass of your's because you know that I know you just came over because, yes, Marie is pretty fine. Well, and with all due respect to Marie, but I'm not nearly as gullible. You're just digging yourself even deeper, you rapscallion. 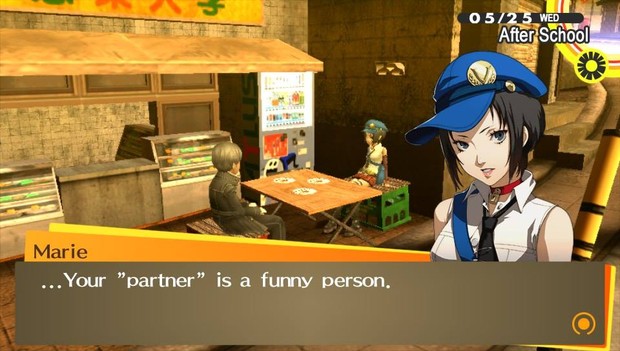 DON'T YOU START FALLING FOR HIM! 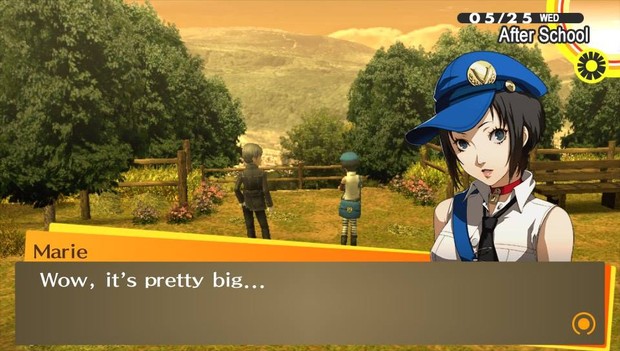 What? Is my fly down? 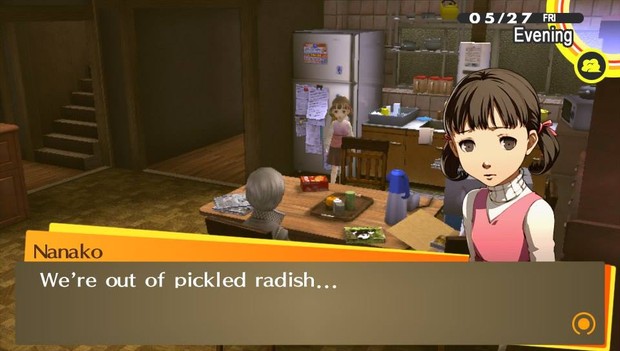 Since I have Power lined up for fusion in a few levels, I also decided to start really grinding out Nanako's Social Link. Well, not just for tha Powah (heheh, good one), but for as much as I sometimes irk at her voice acting, I still find her completely adorable. Unfiltered cute. I wanna give her a piggyback ride or something. Do her hair. I don't know. 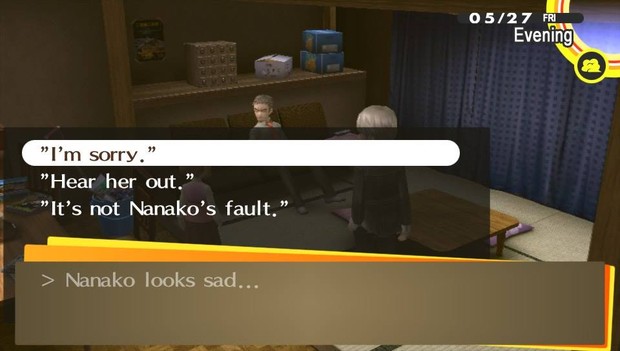 I wanna run through a second time up to this point, with enough Courage, just to tell Dojima it wasn't her fault. Nanako whimpering is my trigger.

[And now on to our daily music and R34 choices!]

Even the battle complete music I never get tired of in this game. It's not just a congratulations, it's a fucking party!

Not just in this song, but in most songs across the entire soundtrack, I can't get over how much I love the tone of the instruments. The keys/synth especially, and Shoji has done really great work with the bass as well. Both Persona 3 and Persona 4's soundtracks are probably the only video game soundtracks I can listen to at almost any point in my day. I've had them on repeat whenever I go on my walks and the time just flies on by. 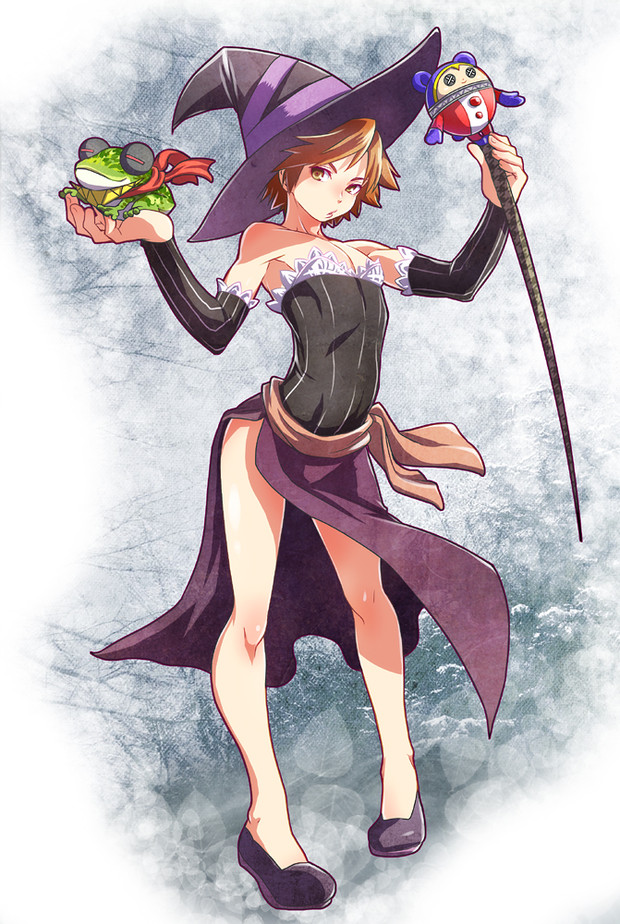 Anyone else here into being dominated by magic?

Hopefully with me rearing up on Kanji's boss fight, I'll have more to talk about next time. See ya then!