♪ Everyday is great at your Junes! ♪ (June 3rd)

I had that Fallout 4 site cued up on my phone while I went to sleep late last night. Didn't think that would end up as my morning alarm, but I watched that trailer as soon as I was up while I could watch it and was plenty happy. It's nothing like what a new Persona 5 trailer would do for me, though. That would make me happier than a puppy in a pit of Milkbones.

Still. How do you follow something like that up? Going back to bed? Aha. No. So, today's EDIGAYJ is a somewhat early one. 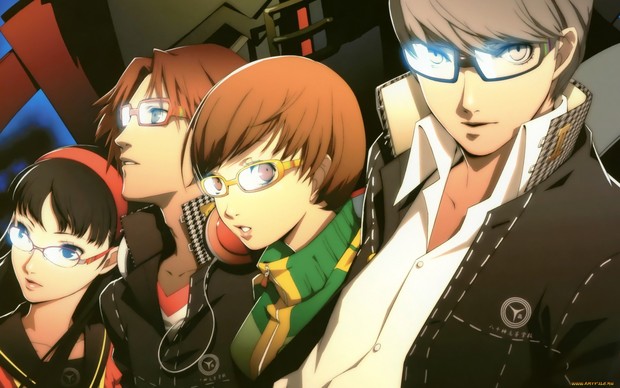 People say Persona 3 and 4 are pretty much life sims amidst dungeon-crawling and lots of beautiful people and they are so right. It's about as stressful as real life in that I have so much to do and not nearly enough time to do it all when I wanna.

I prioritize, I study, I check the weather, I sneak out at night to flirt with Yosuke because Dojima's not my real dad so he can't tell me what to do, and I even end up forgetting important things like being sure to fuse specific Personas on specific days for added benefits. Pretty soon, I'm gonna have to start jotting down a schedule on a Sticky Note because when I forget something I am more distraught than I probably should be.

I'm already having to make sure to write down potentially useful fusion combos. I've learned through watching SMTIV playthroughs that Makarakarn is a VERY useful asset, so I knew immediately to take note of Anubis' fusion(s). 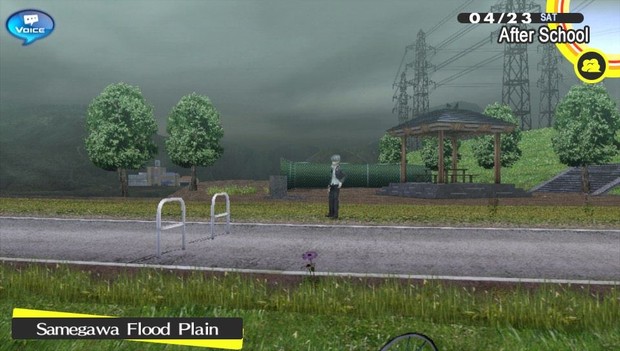 Which Personas to level just once more for that new move, how to spend your days, even down to money management. It's a very tightly-balanced and satisfying system, but damn this game is a handful. In fact, how I've found myself making these decisions has given my own real life perspective. If I can't handle this sort of stress in a video game, how the hell am I going to last once I have college start up again? Then maybe a job? Bills? A special someone?

What if Shadows invade Texas and I have no awesome Personas to use to defend myself with?! At this rate, not only will I likely be ill-prepared, but I'll be just a tad frustrated. I mean, I stiill need to at least play Persona 5. 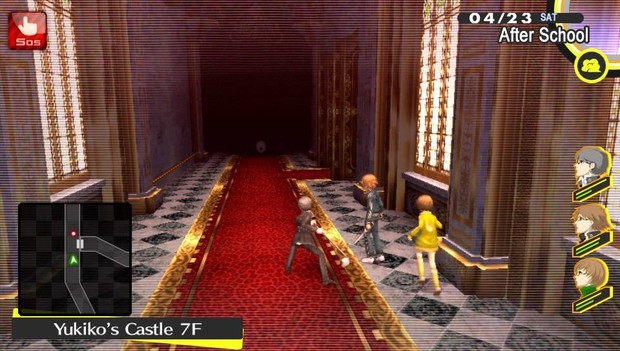 Show me your butt so I can get in a first strike, already! 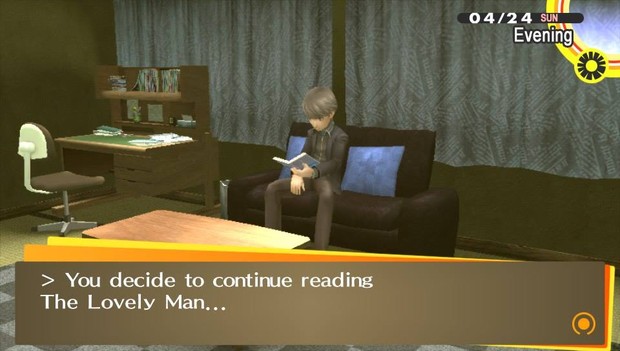 If any book can "raise my stats", it's a book about Jonathan Holmes.

I like how the Shuffle Time draws are sort of miniature, dynamic puzzles. I want to keep as many of the benefits I see laid before me as possible, but there are more variables than the game simply telling you how many cards you have left to draw. I choose one over the other, some completely change, and, before I know it, I have even better benefits and a Sweep Bonus! If you can keep that Sweep Bonus momentum going for another few Shuffle Time's, it can be pretty hard to contain yourself.

Even when I'm not going for a Sweep Bonus, there's a splendid risk/reward factor in certain situations. Say I have a Half EXP card that will net me two extra card choices? I could take that and then a Chest Key and some HP/SP recovery, or I could just take either of the latter and keep my EXP. Dumb mistakes come thanks to a brain as terrible as mine, so HP/SP recovery is typically valuable to me. 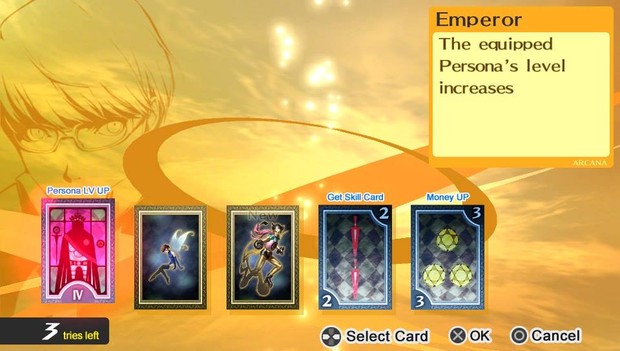 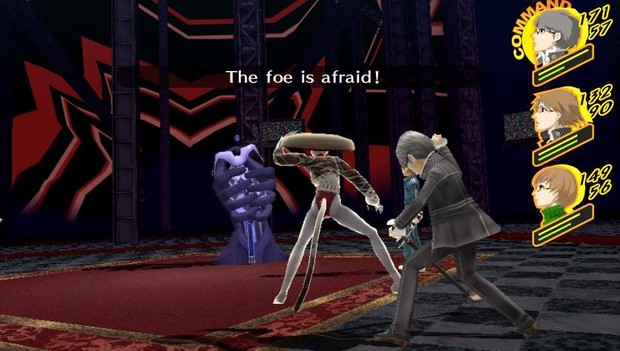 This the strategy I use for these evil handpuppet jesters. I have no idea what to do with them, so I just wait until they run away. 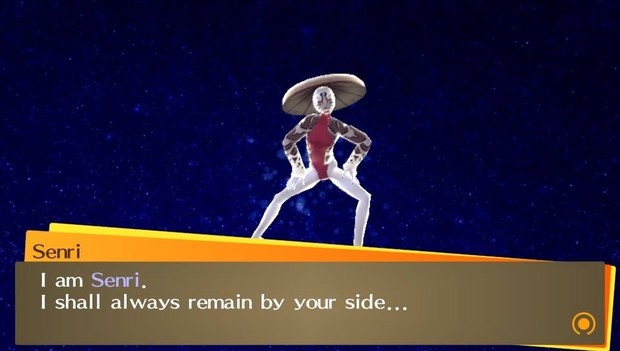 And by the by, Senri was my first Triple Fusion! ... she didn't "remain by my side" for too long. Not even a couple hours later, I upgraded her to Eligor. Can't even keep a promise you made to someone you just met? Pft. I might as well have befriended a pool noodle. 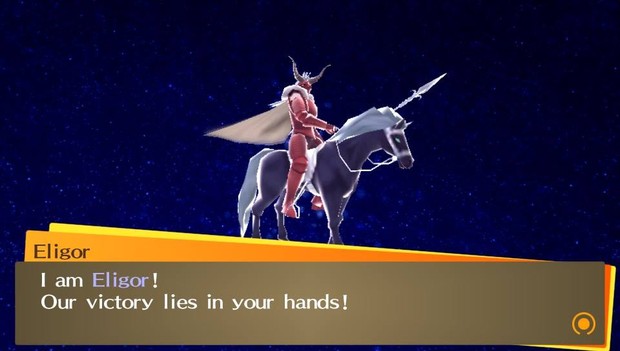 This victory you likely speak of isn't my endgoal here, Eligor. If that is your real name. I just want to make Yukiko my waifu. You're merely a means to an end.

I still hate those golden hands. I'm now convinced I don't have the pants to deal with them quite yet. I mean, I put in all that effort to chase after them, buff up my team, to have it avoid all my attacks, cockslap Yosuke for a crit, then escape immediately afterwards. Gotta admit, that's pretty funny, but fuck you. I'm all the cock that boy needs. 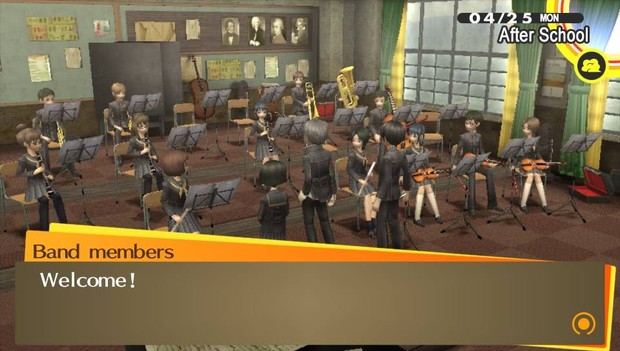 This is Papa Echo Romeo Sierra Oscar November Alpha. Whereabouts of Yukiko are still unknown. I've attempted to make contact with her Shadow, but she's, and pardon my French, becoming a real thorn in my knickers. What the hell was up with that teleporting nonsense? Damn my sense for adventure. I had found the right door early, but kept intentionally forcing myself down the wrong path so I could find more sweet-ass loot. Eventually, I found it difficult to make it back to the only real point of interest.

I feel like a jackass, but rather than continue forward, I ended my session with joining the band at school. I did this with Persona 3 as well. My love of music always seems to draw me to these. Interestingly enough, I've never actually been in Band before in real life. My extreme love of music didn't really blossum until I picked up a guitar around 2006, and high school, for me, ended in 2007.

Yu is every bit the man I wanted to be at his age. Leadership. Confidence. Talent. Brilliantly grey hair. I envy him.

I really wish Band in Persona 3/4 had some sort of rhythm-based mini-game or something co-oping the Social Link aspect. Actually, that goes for all clubs. That'd really complete the experience for me. Or I'm just really really jonesin' for Dancing All Night.

[Finally time for our daily music and R34 choices!]

If you haven't heard any of the Persona 3 or 4 Reincarnation albums, you are missing out. They're so excellent, I bought myself physical copies of both (a novelty for me these days).

For those who still don't know, these albums were intended as sort of remasters of some select tracks from both games. All songs were extended past their loop point, some were built upon, remixed, one or two songs even changed completely in genre and tone. They're easily amongst my favorite albums in not just games but general music. Persona 3's has a beautiful rendition of Aria of the Soul. It literally chokes me up. Everytime.

P4's Reincarnation album gives us an even more relaxing take on Heartbeat Heartbreak. You still can't quite tell what the singer's saying (Hobbit, Hobbit... it keeps on pudding!), but we can forgive that. Actually, we love that. Don't we? These lyrics are like fever dreams with the way I hear them and that's great. 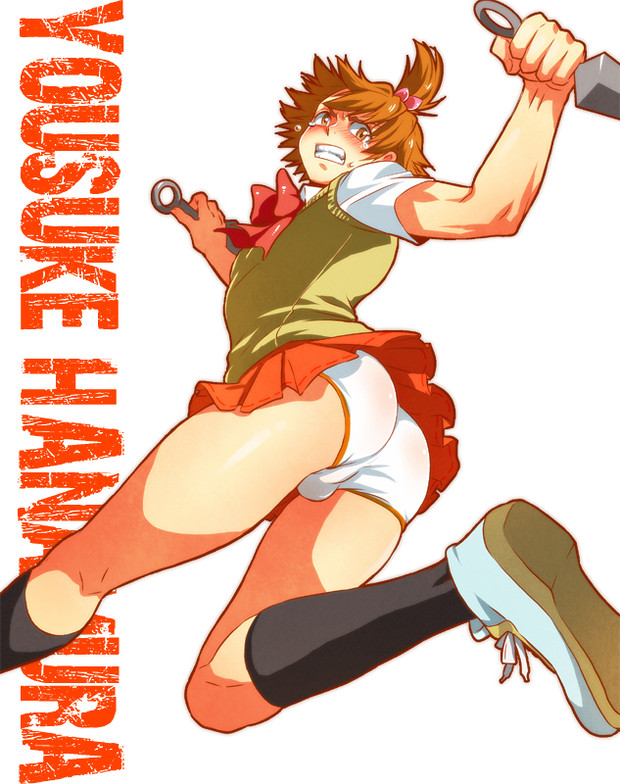 Don't worry. I still have plenty of Yosuke!