Thick as Thieves: The New Order of Karras 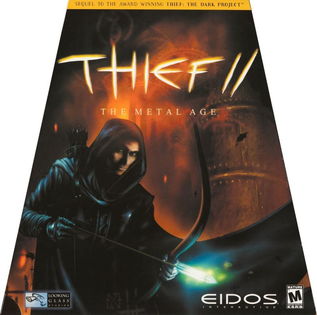 It's 1998, when ninjas and some dude who beaten another dude called Big Boss twice ruled both the Playstation and the gaming industry as pioneers of 3D stealth-based games at the time. Disappointingly for the Japanese, they will not be the only devs who were part of history that year, as an American developer known as Looking Glass Studios also knew how stealth games works, albeit in a different, non-lethal way. In November 30 1998, the world's first "first-person sneaker" known as Thief: The Dark Project is released. But we're not gonna talk about this game, as I've covered it previously. I'm gonna talk about the sequel released back at 2000, which is Thief II: The Metal Age.

Yes, I'm quite a Thief fanboy (Which means I like the reboot), so bear with me as I'll hype this game up to the skies.

Another Thief game. Another badass intro with guitar riffs and percussions.

If you're not familiar with the Thief series, it chronicles the (mis)adventures of Garrett, a peacekeeper-turn-master thief who steal lots of gold and valuables in a steampunk city to pay his rents. Over the course of his work throughout the games, he have to unravel some villains' plans and reluctantly save the city, just because some prophecy stated that he's the chosen one.

Thief II starts a few years after Garrett defeated a devil god and lose his right eye. He find that his thieving works are getting harder these days, due to a new sheriff who's a bit too good in catching criminals and thieves. As he work hard to loot stuffs, he were then again reluctantly involved in a growing conflict between his former adversaries and a newly-formed organization whose 'prophet' seeks to take over the city through fire and metal.

Like the other Thief games, you'll spend the whole time sneaking around the place and evading, as due to your character's limited combat skill and health bar, swordfights with AIs is considered suicidal. Thus, you'll constantly rely on shadows to move around, as your HUD's visibility gem will indicate whether you're hidden in the dark. You'll also need to be cautious on what surfaces you step on, as different surfaces (Grass, carpet, tiles or metal) causes various amount on noise, so it might be best to quietly walk or crouch across hard surfaces, while you can run across soft surfaces.

On every level you'll be equipped with various arrows and devices. Water arrows are undeniably the most useful item you'll use throughout the game, as it could put out fire sources and clean out any blood traces. Normal and fire arrows are mostly for offensive purposes. Moss arrows are for giving the ground some much-needed soft surfaces. Rope arrows attaches to wood and releases a rope for you. Lockpicks are for lockpicking, noise arrows are for distractions and so forth. You'll also have an artificial right eye to zoom in on distant view.

Forcing them to sleep with a club work much better than a stab with a sword.

Depending on the difficulties, you'll also have to do extra work, for example, stealing a limited amount of gold or some prized treasure off a guarded area. Afte you complete a level, all the gold you collected from stolen items will go towards to buying equipments for your next heist. Do note that all the valuables you stole never accumulated together, so how many gold you have to buy stuff at the start of each level depends on how many you have stole during your last heist. This is said to encourage players to take more risk by getting us to buy as much things as we can and utilize them on the next level, so you can feel free to spend all the money and experiment with them.

The AI is also pretty damn good for its time, as different human AIs behave like what normal humans would do when there's a change in the environment. Civilians would run for help, while guards will look for you and attack you when spotted, or retreat when badly injured. In higher difficulties, guards can even respond towards the slightest difference in their surroundings, such as noticing a locked door unlocked or saw you running from one shadow to another. Of course, like any advanced AIs, they can be fooled from time to time, but overall, they're still impressive to this date.

Ugly steampunk robots frustrated you? Find a way to cool them down.

I love playing the Thief games, as it not only let me play as a badass thief who's more specialize in knocking the lights out of the poor sods who never see it coming with a club, I were also constantly entertained by Garrett's snarky dialogues, as he acts more like a smart-ass than a generic brave protagonist.

One of my favourite levels in this game is the one when you travel across rooftops to enter a big tower and steal the big bad's plan. During your journey towards the tower, you can run around the residence to look for things to steal, witness a petty argument between four rivalring guards for two opposite families, and bump into an Evil Dead reference. Did I mention that the whole distance between the rooftops and the big tower is within one giant map? It's true that you run across around 20 blocks towards the tower and going back to where you start within a single map. No transistion between the level and no loading times, just you roaming around the big city to your objectives. Pretty impressive for a stealth game back then.

On a side note, the first two games' visuals and default controls can be very outdated for some. For starters, you might want to rebind some of the controls into your normal WASD FPS controls, as the default still uses the old directional keys. The overall visuals aren't that bad, as the pixelated backgrounds still hold up well to this day, but all of the AI appearances are pretty ugly. Even with all the best HD mods you can download to improve both the background and model appearances, they didn't get the same hi-res model treatments as System Shock 2 did with its own mods, which is odd considering that both ran on the same Dark Engine.

Also, the story did end rather anti-climatically. While the first and third game ended rather appropriately, this one is pretty awkward, which might probably be due to budget constraints. Not as bad as the reboot, but still. Did I mention that you get to rob the whole bank by yourself?

Aside from a few niggling issues, Thief II: The Metal Age is still considered one of the best stealth games of all time, even in this day and age. Thus, anyone who don't mind struggling with a bit of the outdated stuff in it should definitely give this a try.