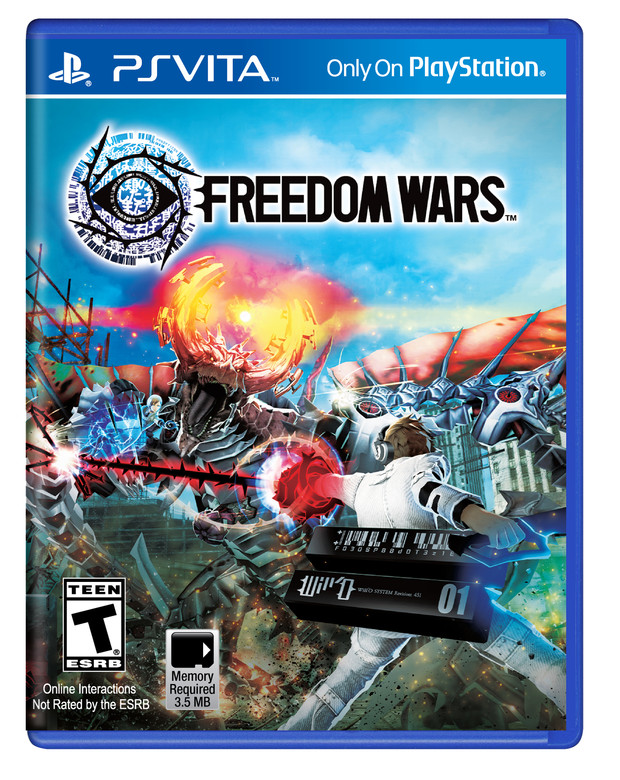 A bit of a forewarning, I didn't play any post game or online content for this game as an update error corrupted my game file.

A good chunk of the Vita's Japanese library is made up of cooperative monster hunting games. Freedom Wars is yet another take on the formula popularized by Capcom's Monster Hunter series. However, the game stands out thanks to its player movement, variety in mission structure and focus on story and characters. 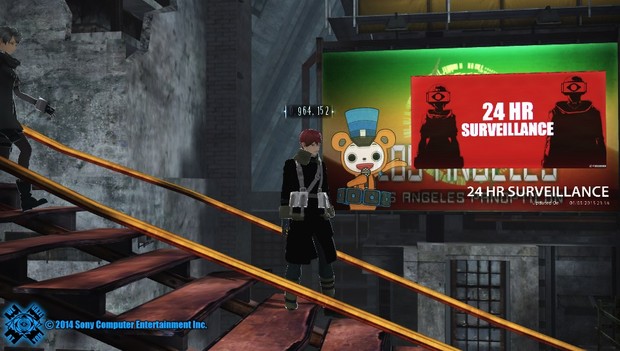 Freedom Wars takes place in a prison system where convicts, known as “Sinners” have to do operations to reduce their one million year sentence. Under constant surveillance, characters will be punished for crimes they commit. These can be as simple as characters taking more than five steps in their own room at a given time or having unauthorized conversations with other people. Surprisingly, it's a tale more about defending the prison from destruction than trying to escape it. Reducing your sentence does play into the story's progression, but it's largely frivolous.

The player is a silent protagonist that can be customize aesthetically. The rest of the characters have a lot of personality and are quite chatty. So chatty, in fact, it takes a good hour or so for the game to really get started. As troublesome as the first hour is, it lays the foundation for a cast of entertaining characters who often borderline becoming complete anime stereotypes.

Freedom Wars' gameplay is broken into two categories. When using melee weapons, it plays like a simple hack and slash game with basic light and charged heavy attacks. Changing to a gun switches to a third-person shooter mode. Using both types of weapons and play styles, players take on large enemies known as “abductors” as well as human soldiers and small robots. Abductors are the real meat of the challenge, but smaller units can put up a fight as well. 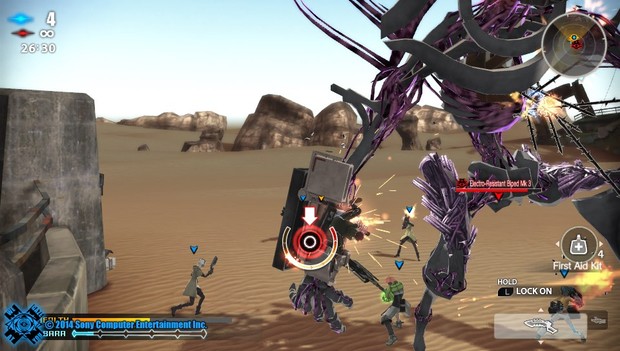 Movement through simply walking or running is sluggish. Instead, there's a focus on traversing the environment using a “Thorn,” a grapple hook-like device that attaches and grapples to most enemies or surfaces. This adds a vertical aspect to the game as the player can pull themselves up buildings or onto a monster to attack specific locations like their head, back, chest or arms. Thorns can also be used to topple monsters, as the player bind them and and tug them over.

Missions are set in various arenas, including large open environments, grid-like city streets and claustrophobic mazes. Players join a team of other players or NPCs usually to take down abductors, but there are a large assortment of other mission types, too. This includes online shooter-style modes, like team deathmatch, capturing control points or competing for and rescuing civilians, which is like a twist on capture the flag. These feel more like a secondary aspects to the game because the controls and format feel built around fighting abductors, but they're constructed well enough to remain enjoyable.

What Freedom Wars has in mission diversity, it lacks in monster variety. There's only about a handful of abductor types. Instead, each has an equipment slots that can be filled with with a wide array of weaponry. Their basic attack pattern won't change, but the equipment requires the player to approach the abductor in different ways depending on their loadout. The limited number of types but extensive customization is reflected on the player's build as well. 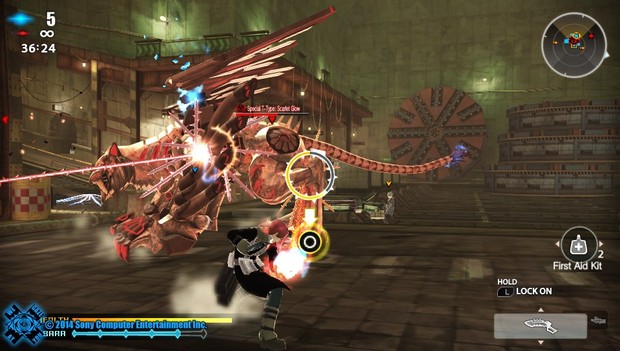 Each player comes equipped with the previously mentioned “thorn,” with the type of thorn determining their class. There are healing thorns, shielding thorns and binding thorns, which act as recovery, defensive and offensive roles respectively.

There's no class specific gear, so players are able to choose from a large variety of weaponry to fit their own play styles. For example, smaller lightweight swords can be used for sawing limbs and equipment off abductors, where heavy melee weapons deal large chunks of damage and staggers foes. Light machine guns are limited by their short range but allow for lots of mobility, rocket launchers deal spikes of damage and chain guns deal consistent damage over time but significantly limit the player's movement.

All these weapons can be further upgraded and altered by crafting and combining gear through factories. Some real money micro-transactions are introduced here through real-life production times for gear. The crafting is a bit beyond me, but it largely seems to be about absorbing weapons to gain certain attributes from another. It looks like a system you could go all out on for creating your perfect equipment set, but I never was able to do much outside of basic gear. 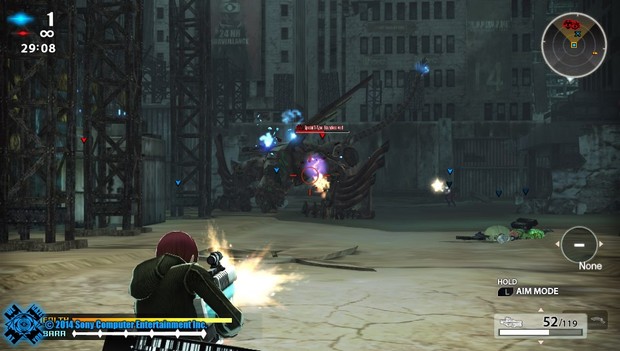 With the ability to equip a thorn, two different weapons, multiple stat augmentations and additional support items, there's quite a bit that goes into a character's loadout. The game gives the player slots to save their gear sets, making it easy to switch between them. Crafting sets to deal with different mission types and party roles isn't a huge deal offline, but I'd imagine with online and post-game content, it'd become essential.

I can't say I have a huge amount of experience with the monster hunting kind of genre, but I really do appreciate the variety Freedom Wars has to offer. The game starts slow and the crafting is a bit over complicated for myself, but I really enjoyed my time with the characters, world and the distinct mix of play styles.