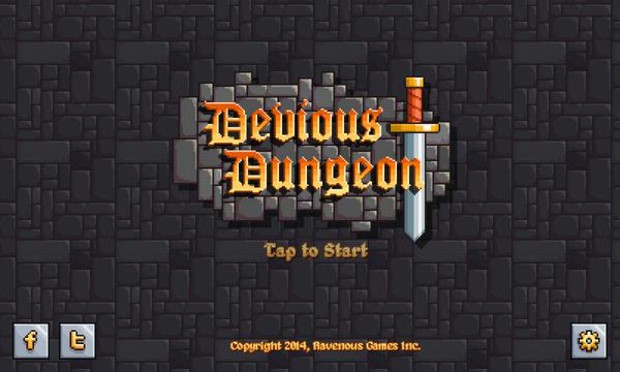 Devious Dungeon is an aptly named dungeon crawler where you, the true hero of the kingdom, are on a quest to slay the dragon at the bottom of the dungeon. It's a 2D action-platformer where you run around, kill enemies, and collect loot.

The platforming is excellent. It's got the standard run and jump style to it. No double-jumping or wall-jumping. Only single jumps and the simple running left and right. Its great for all sorts of purposes, whether it's to slay an enemy or just run around it. Everything about the platforming is just so solid, tight, and does well to flow nicely with combat.

Combat is another thing this game does nicely. Attacking is simply choosing when you're going to swipe at your opponents. What makes it so great is how you can approach enemies. When attacking you can still move (albeit much slower than normally) forward or even backwards without changing directions, which, in conjunction with the good platforming mentioned before, is very satisfying. If you want to move forwards when attacking an enemy, you can. If you want to move backwards when attacking an enemy, you can. If you simply want to stay in place when attacking, you can! It's pretty simple yet once you get into it it can become quite enjoyable. 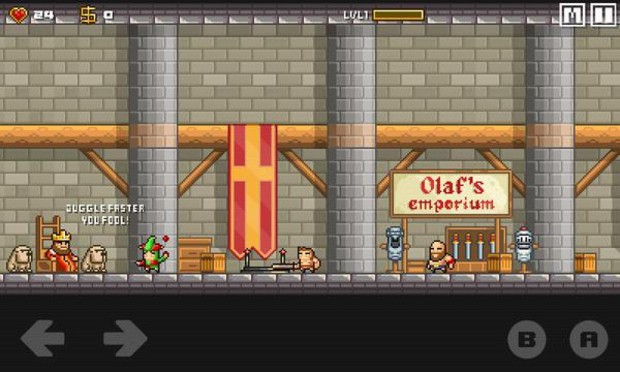 Enemies are in a good variety, coming in two fashions. Some are merely re-skins of older enemies, just looking and being tougher. Others either tweak, combine, or add entirely new mechanics you have to work around. Some require patience while others require rushing. While some can just be a pain, others are very balanced and have interesting tactics to learn about defeating them. The only problem I had with them isn't really because of them as much as it is another thing.

This thing is called level design. The levels aren't randomly generated, but are instead randomly selected from a selection of pre-made levels. This means that each level has the potential to be repeated, which trust me can happen a lot. None of them are really super interesting either, so it's not like there are any memorable ones that even come to mind. They're just a selection of levels that start to become stale after a while. Each time you beat three levels you reach a checkpoint, and can progress to the next three levels.

The actual level design itself isn't even that good. There are platforms, spikes, and enemies all over the place. Sometimes there are way too many enemies or not enough loot. Loot is really just money, and come from killing enemies, random objects, or treasure chests. The only ones that give you stuff worth a decent amount of money are the treasure chests, which are mostly found in secret rooms hidden my invisible tunnels. The others give almost only bronze coins (worth 1 unit of currency) up until the late portion of the game. It's silly and makes no sense. Loot should drop at higher qualities, simply for the enjoyment of gaining more. 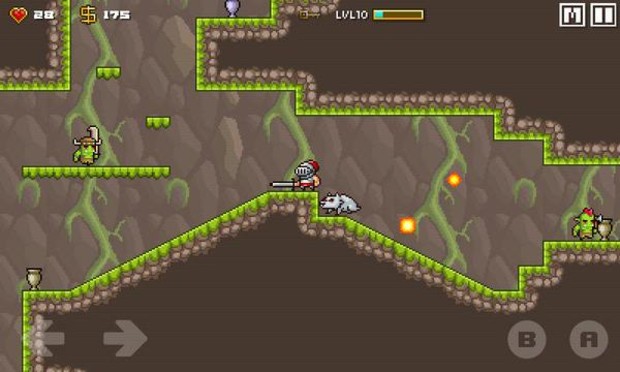 Another thing that isn't good is inventory. Not only is the shop that sells items done poorly, but the items themselves are lackluster and boring. The shop sells things to you one at a time. Everything is hidden and unobtainable except the one right after the one you just bought, meaning you have to buy everything on the game to not only get what you want, but to see your options. It's ludicrous and makes discovering armor and weapons and huge time-sinker. Not like any of it maters anyway.

All weapons work the same and just do more damage than the last. Armors all just add more health to the character than the last armor set did. It's kind of a shame neither have any bonus functionalities and just make certain pieces of armor objectively better than the rest. This might make it very hard to play the later portions of the game in you favorite suit of armor with your favorite weapon because it might be horrifically inferior to what you should have at that level. It's a shame.

Honestly, the whole game can feel like a grind. Collecting scraps of bronze coins that are bouncing around the level while dealing with enemies is annoying after a while. Discovering the next weapon or armor set is probably the most interesting part of the game, if I'm going to be honest. The levels can end up feeling like a grind to unlock the next thing, which is a shame as the pay off isn't too great and the gameplay in-between barely changes. 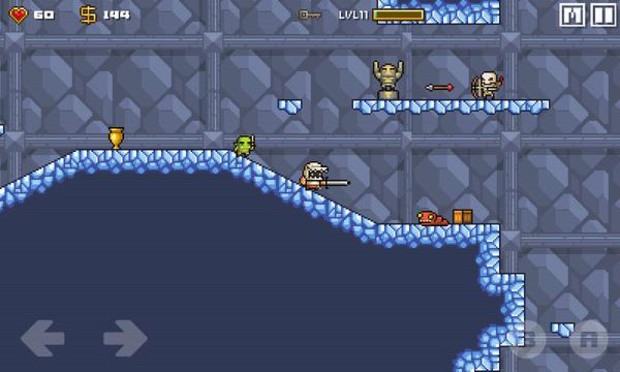 It does change for boss fights, which aren't bad. They involve a lot of dancing around the boss and dodging it's attacks. Unless you have enough health to just sit there and spam them until their death. If you can't do that however, it's fun to use actual skills until you win. Some bosses are pretty well designed and decently fun, while one in particular *cough*second one*cough* is not so much.

The visuals are great, but the visual design isn't as much. The somewhat retro, pixelated art style is beautiful, utilizing a lot of bold, vibrant colors. There are a selection of different level skins that a level can wear, each one having a dominant color and looking very nice overall. It's a shame that the level skins are completely random and aren't really important. The game is split into five parts with the five bosses. There might as well have been five level skins that defined each area. But no, instead it had to be unmemorable.

Sound design is pretty good, using lots a great and satisfying sound bits as well as some decent music. Not bad at all in that department. 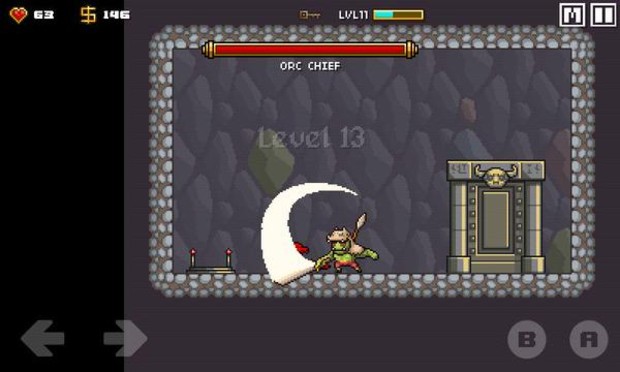 Over all Devious Dungeon has same charm to it. It had a lot of assets up it's sleeves, but in the end squanders some of them in a bunch of ways. It's not a completely bad game as I might have made it seem with pointing out a bunch of flaws and what not. It's actually pretty fun at times, especially when you don't have much to do. When choosing games to review, I was actually torn between this game and Random Heroes, but I settled on this one due to it's flaws. I feel like they might need to be addressed, you know.

In other words Devious Dungeon 2 is out for IOS, and looks awesome so far. The trailer really sparked my interest, as it seems a munch of things have the potential to be solved. It looks pretty rad and considering that I felt this game was a somewhat decent play I'd say that I might just buy it once it's out for Android systems.