The Witcher 3 impressions 1 hour in: ($30 trade-in value at Gamestop, I called)

Maybe some of you guys caught my last blog about my first couple of hours with Bloodborne.  In there, I layed out all of my early complaints and frustrations with the game in as much honest detail as I could.  Over time, I grew to love the game, and never got around to writing the follow up blog detailing how I had changed my mind.  So keep that in mind, and read on with your grains of salt handy.

As it says on the box's front cover, it "Defines Next-Gen" according to IGN, and has been the recepient of over 200 awards.  My only question is, why is everyone crazy but me?  Why does this keep happening to me?  I begrudgingly bought GTA IV after reading how it had the best writing in any medium over the last CENTURY, and after seeing about 500 perfect 10 reviews.  Rarely have I ever been so disappointed with a game as that.  Then I watched all the trailers for Red Dead Redemption, read all the reviews saying how it's the digital emodiment of Citizen Kane meets Tombstone only to find a broken piece of garbage with the worst controls ever.  I figured out then that no matter what I read online, I just now know that Rockstar Games aren't for me.

Well, I've heard about the same kind of praise for The Witcher series since 2007.  I'm not a PC Gamer, so I never tried this series previously, and I didn't want to bother hooking up my 360 to try the 2nd one when it came out on consoles.  I heard over and over how this is the pinnacle of PC gaming, how it's the most elite, mature RPG series, how the combat is very well done, and super tactical.  Then I read all the buzz over the Witcher 3 over these last ... months, years?  I read all the perfect reviews, and Destructoid's review.  To Chris Carter's credit, he does point out a few of the bugs involved in movement, and I thought the review was probably fair.

Anyway, I finally tried this game.  I told myself 100x I wasn't going to bother buying this.  But on the way home from work I decided to go pick it up at Wal-Mart since I had the next two days off.  Everyone can't be wrong about this game, right?  I mean, there's no way I'd hate it, right?  I even like middle-tier games, low budget games, and a ton of differnet genres.  I love RPGs.  I've enjoyed WRPGs in the past many times, but not for a few years admittedly.  I'm watching Game of Thrones at the moment.

But sadly, no.  Just like Rockstar, I now know that CDProjekt Red games are not for me, no matter what the reviews say.

The biggest flaw I can see with this game, is that the controls are fucking horrible, and attempting to move around always results in some alternate version of what you intended.  Your character has so much forward momentum that you can't even control where he's going most of the time.  I noticed this almost immediately, but it really became apparent when I was in this very narrow ditch of dirt.  There were two boxes laying on the ground that I was attempting to pick up since they had some random alchemical items in them.  I was standing right next to them, and I attempted to hit up on the joystick only to see my character move right past it over and over, clumsily missing the box right in front of him.  It was so ridiculous I almost recorded a video of it and uploaded it to youtube to show you all, so I could make a gif out of it, but I just don't have the motivation to do all that.  Trust me, his movement is not precise, at all.  Coming from Monster Hunter 4 and Bloodborne, I'm just wondering why anyone even puts up with this?  I just can barely even control how he moves.

Next, I saw a very gentle slope in the terrain.  I tried to jump off it as I was running, and he landed and died.  This surprised me to say the least.  The drop was literally like, 4 feet.  How could The Witcher die from just taking a small jump over some grass?  Just moments before, I had to watch an extended cutscene showing Ciri training over the edge of a castle wall, by balancing her steps on small wooden pegs while she moves around a swinging hunk of wood and metal. 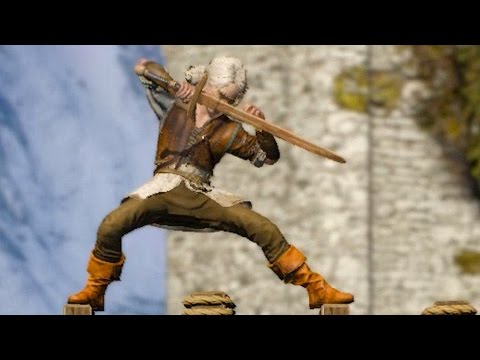 In their defense, they're really quite graceful when you don't have to play the game, and just watch cutscenes.

I figured these guys would be able to handle dropping 4 feet, otherwise, how are there any Witchers?  Even one fall from this thing, and they'd all be dead.  Am I supposed to believe that no Witcher has ever failed this training exercise?  If that's the case, maybe they need some more difficult training?

Anyway, moving on to this gentle slope I referenced earlier ... my game loaded up again after dying, and I went back.  This time I decided to see if I could slide down the slope, since it clearly had an angle to it.  Sure enough, I took one step off the edge, and he landed on the slope and went into a sliding animation.  Good I thought ... until he finished sliding to the bottom and DIED.  He literally slid down a gentle 4 ft. slope, going very slowly, touched the end of the slope and died.  How can this guy fight monsters again?

Apparently I'm the only one that this bothers, because I've never seen or read anyone else mention it.  I've practiced martial arts for several years in the past, but I was never anything special.  I watched a lot of martial arts movies, cartoons, throughout my life, but so have millions of people.  So can anyone tell me why I appear to be the only one to notice that all of Geralt's combat animations are laughably stupid?  Why does this guy spin around with 360 degree pirouettes prior to every 2nd or 3rd strike?  For a game going so far out of their way to portray the kind of gritty realism + fantasy that you find in Game of Thrones, why is this guy giving his back to his opponent literally ALL THE TIME?  Even if you're standing so close to the enemy that they are touching you, you hit the strong attack button and he starts spinning around for no reason.

I figured this guy would do some kind of HEMA combat, or fencing, or even just something slightly less flamboyant and less obviously ridiculous, but I guess not.  This doesn't actually impact the gameplay, but when you combine the excessive forward motion, the clumsy movement controls, and wed that to this clown spinning around like an idiot in a realistic-styled sword fight, you come away from the game feeling like a moron - or at least I did.

Is soooooooooooooooo bad.  It's worse than Deus Ex: Human Revolution.  It's just weird that no one seems to care.  Little kids sobbing by their dead parents on the side of the road are making me laugh, not feel grief.  Geralt is sounding more like Batman than Noctis did.  This is not helping me enjoy the game.

I'm playing on a 1080p TV in a small bedroom in a one bedroom apartment, approximately 5-6 ft away from the screen, and I have to regularly strain my eyes to see what is on the screen when picking up items, or readintg through menus.  I can still read it, but not comfortably.  It's a small thing, but I think I need to literally sit on the floor in front of the TV to comfortably play the game. 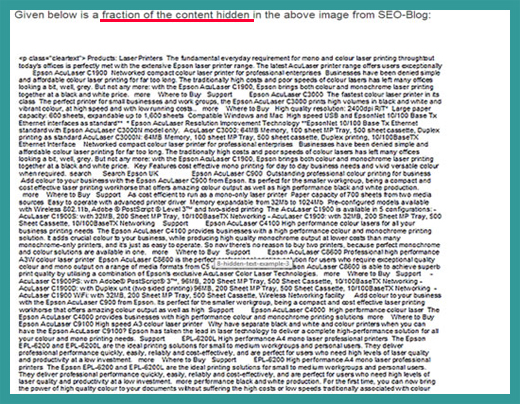 So in closing, I just want to know, why does this keep happening to me?  Am I the crazy one?  This game will sell millions and I think most people will probably enjoy it a lot.  It might even win Game of the Year from a lot of people and websites.  Are my standards too high, or is everyone else's standards way, way too low?  I feel like the game is almost comically broken from a gameplay standpoint.

Graphically, sure it looks nice if you enjoy looking at grass a lot.  Maybe that pretty grass can carry the game for you, but so far I've already called my local gamestores asking about trade in options and they've only offerred me $30 in store credit.

So ... I guess I'm stuck with this terd, and will try it a bit longer.  But if nothing about my opinion changes in the next 9 days, this embarrassment of a game is getting dropped permenently for Splatoon.