Chris here yet again to share some stuff I've been thinking about lately.

The first thing on my mind is anime, in general. I've never considered myself to be an "anime fan". In fact, over the years, there have only been a few
animes that I would claim to be a real fan of. My favorite to this day is Samurai Champloo. 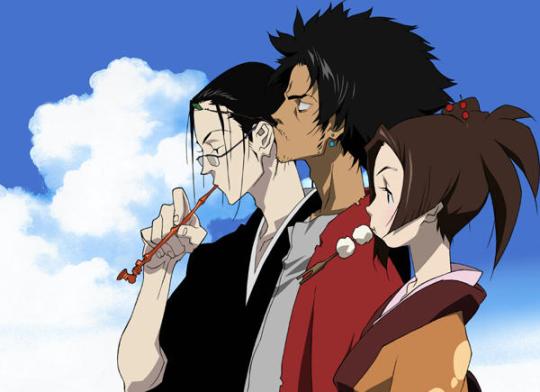 There's always something else out there...

Samurai Champloo was the perfect mix of beautiful animation, a nice ongoing story, and what was essentially a "bromance" between three
individuals. Mugen, a lovable d-bag who mixed swordfighting with Capoeira and did it all with a "drunk" swag that would get any other man killed.

Along with his "rival" Jin. A thoughtful Samurai with a demeaner so cool, it just makes you angry.

And, of course, Fuu. A lovely young lady with a lot of heart, that somehow convinces these guys to escort her through the dangerous countryside of
Japan trying to find, "The man who smells of sunflower.".

It's the journey that really makes this work. I got attached to these characters as they wandered the lands. Their back and forths made me feel at home
and the show took it's time with pacing. I really felt like I was along for the ride. The show has a distinctly mellow vibe too it, that I really
appreciated. I just felt relaxed whenever I watched it.

It's a buddy roadtrip at it's simplist, and a high action kung-fu flick at its most intense.

The story's a bit predictable and the whole series is way too
short. Or, maybe it was the perfect length. Either way, I loved every minute of it and that show introduced me to the late Nujabes. That guy made
some amazing music and the shows soundtrack never seemed out of place. The way this show blended tradition with modern music really sucked me
in. It's a really good time if you havn't seen it.

And, then you have Initial D, which somehow managed to make specific drifting techniques the most intresting thing ever. But, that's all I'll say about
that show...streetracing.

But, the anime that I'm all about at the moment is Ikkitousen: Great Guardians. At its shallowest, it's simply a show about school girls with big boobs
who fight eachother and then their shirts explode. That being said, the fight scenes are quite well done. The story is entertaining enough. But, once
again, I dig the banter. The bickering between the characters is charming and even funny at times. I'm only a few episodes in so, I can't say too much
one way or the other. But, this show reminds me a lot of another one of my favorite animes; Sekirei.

I won't say too much about Sekirei either, other than it was one of the most hearwarming storys I've ever watched. Once again, love story with epic
fight scenes and boobs...sign me up. 'Cause, I'm a creep.

I've been hearing a lot of talk about an anime called Shirobako. I've seen people here on Destructoid talk about it. I've seen it on twitter. And, I'm
pretty curious. So, I might be checking that out if I can.

I'm still playing Team Fortress. I would even go as far as to say that I'm getting better at it. Not much better. But, better, none the less. In addition to
playing as the medic, I now like to play as the pyro as well. There's something really satisfying about setting people ablaze when they least expect it.
It's also fun to see how mad people get in the chat. "fuk u noob pyro!". Haha, they don't even know!(how right they are ^-^)

Sometimes, I like to listen to music while I play.

During my last session, I finally got around to listening to Drakes new album "If You're Reading This, It's Too Late". It's okay. His first album is still my favorite "Thank Me Later". I just related to a lot of stuff on it. Now, he raps about being
successful. I have a harder time relating to that but, I can't fault him for writing about what he knows.

But, in Team Fortress, it gets me amped to murk
foes. You know how that shit goes!

I never actually saw this show...

And, then we have Brawlhalla. If you've never heard of it, It's a Smash Bros clone. That simple. However, it's really well done,(as far as I know).
And, I think I finally understand why people like Smash so much. I played Smash once or twice in the past, but I honestly just felt kinda lost. The mix
of platformer and fighting game and cute characters, just kind of threw me off. But, after Brawlhalla, I can't wait to get my hands on Smash and throw
down with some fools.

Last week, I got a few suggestions on some indy games to look into. All the suggestion I got look like great fun. But, I'm being a penny pincher lately.
But, I did manage to find a demo of VVVVVV, so below is a video of me playing that demo. Thanks again for the suggestions. As, soon as I make
some bank, I'll pick those suckers up.

Thanks for reading!
Bonus points if you watched the video. ^-^
See y'all next time!
<3
-Chris

Hi. My name's Chris.
I play games.
I frequent the Destructoid c-blogs.
I have a YouTube channel.
I like you.