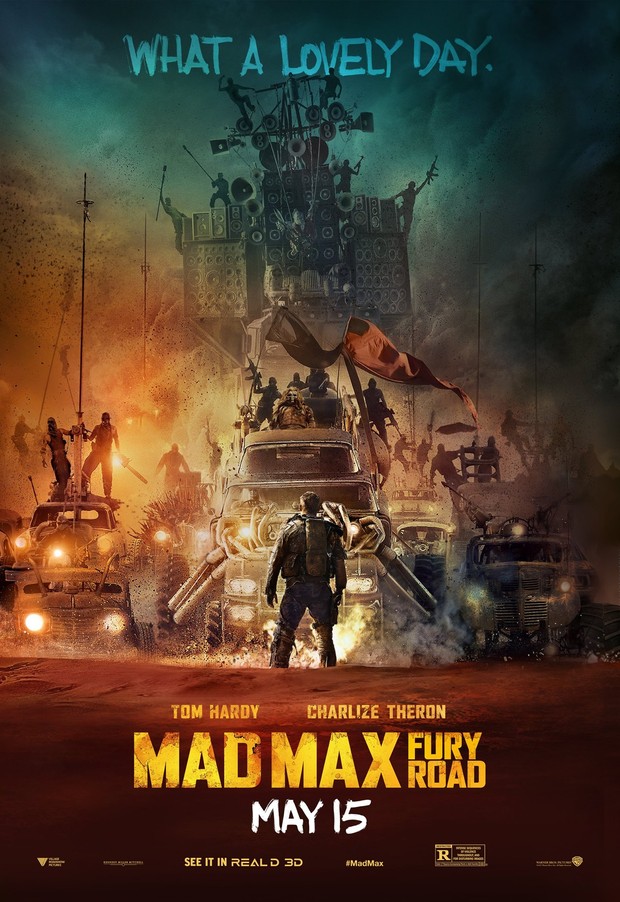 So here it is. Over a decade this film was in development, despite being hampered by 9/11 and Mel Gibson's departure, a new replacement actor was found and production continued, and now here it is. But here's the $150 million question: is it a great Mad Max film? And my answer? F***. YES. George Miller finally went back to his R-rated franchise after 30 years, and made a movie, in my serious opinion, better than The Road Warrior. And that's saying something.

Set in a different timeline of the post-apocalyptic Australia, after giving us a view of Max Rockatansky (Replaced by Tom Hardy this time) and his V8 Interceptor, he was quickly captured by a gang called the War Boys, and the cherished Interceptor was crashed, again. He then were used as a human blood bag by one of the War Boys named Nux (Nicholas Hoult) to chase down Imperator Furiosa (Charlize Theron), an elite soldier of the War Boys' leader Immortan Joe (Hugh Keays-Byrne, who was Toecutter in the first Mad Max film), after she smuggled five female captives inside her War Rig, out of Joe's stronghold, The Citadel. 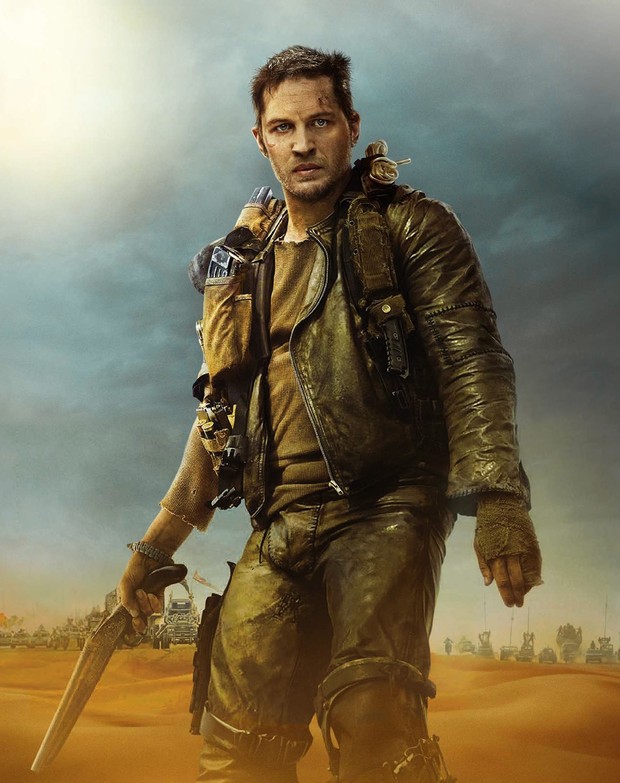 You'll be sorely disappointed if you think he's gonna keep that.
(Although happily enough, I never thought of it and
by the time I'm writing this, it doesn't matter anymore.)

Essentially, this is The Road Warrior's climatic tanker chase‌ being extended into a 2-hour car chase movie, which is not a bad thing. Almost 20% of the movie are pretty much the normal scenes where the characters communicate to each others while the rest are all balls-to-the-wall realistically violently awesome fight scenes and car chases. The pacing and the cinematography are also perfect as always, expected from Miller's directing.

If you think The Road Warrior and Beyond Thunderdome is still over the top till this day, Fury Road cranked it up to, I don't know, 20? 100? Nevertheless, the whole movie's insane. The Citadel's design is just so wicked, for a lack of better words. Every single vehicle in this movie counts too, as they were bought off the scrapyard, and implemented with as many crazy details as possible. And best of all, they're all made to be driveable, for the sake of real stunts and crashes. It's a shame that most of these awesome cars didn't survived the production, and I'll bet that the stunt drivers had numerous scuffles over who gets to drive the cooler vehicles. It also helps that Miller insist that 90% of the film stunts are all grounded and practical, so that we'll often feel geniunely shocked and excited when something happens. Sure, they did used green-screen or CGIs for certain scenes, but most of the crashes and explosions? They're as real as the naked eye could interpret. Which is a big plus for us who are sick of all the CGI-dependent films and hunger for more realistic action.

The performances throughout the film are splendid (pun intended) throughout. While Tom Hardy will never be able to replace Mel Gibson as Max, he doesn't need to, as this is in a different timeline. Even if his guilt-ridden Max has a more subdued performance, it's still a great one nonetheless. The highlight, however, came from Imperator Furiosa, which Charlize Theron gave us an excellent performance as a scarred but tough woman soldier who struggled to save the Five Wives from Joe's cruelty. It is pretty much evident throughout the film that this is her story, despite Max's name on the movie title. The supporting cast are also equally great. Nicholas Hoult is brilliant and comical as the sympathetic War Boy Nux who akin to an extremist militant, wishes to die and reborn in the 'Walhalla'. The Five Wives were pretty good as they often work as a team to stay alive. The bad guys in general are very deliciously evil and hammy, especially Immortan Joe, whom I considered him to be one of the best Mad Max villain next to Lord Humungus. Last but not least, there's also a bunch of 'Occams' arriving late to the scene, if his description is accurate, but more on that later. 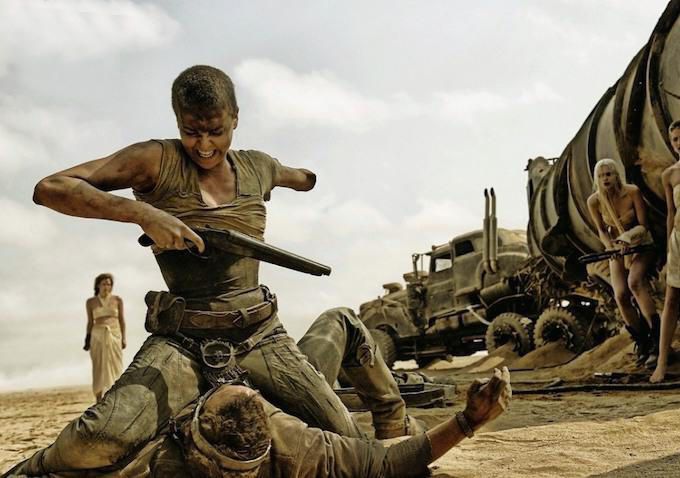 Don't ever f*** with Furiosa, even if she's only one-handed.

While there are certainly dialogues in it, like The Road Warrior, Fury Road can also be classified as a silent film, as the cast mostly act with their body movements and face reactions, while the dialogue were pretty much optional, so anyone who don't speak English could understand what they were doing.

Some of you might have heard that some 'men activists' tried to boycott this film for giving women prominent roles in it and ruin what could be a macho-filled action movie for them. While I don't know if they really said that, I'd call that bullshit. Women, like men, need to help each other to survive in the wasteland, and the Five Wives are a perfect example of it. Instead of bickering over which gender should do which role, they step up to help one another no matter the situation. Also the 'Occams' I talked about? They are pretty cool, tough and funny people who doesn't hesitate to rack up kill counts. It doesn't matter that I'm someone who like macho action movies, they are very sweet people whom I wanna hang out with in the wasteland, and when one of them fall, it hurts pretty bad for me.

Despite it being filmed in the Namib Desert in Africa, it seems to me that Miller tried to make the film feel Australian by getting every non-Australian cast to make their own Australian accents, and it shows. Unsurprisingly, the main protagonists' accents aren't very convincing. Hardy's hard to recognize, while Theron's somehow never bothered with it, other than uttering the word 'guzzleline'. Both Nicholas Hoult and Zoe Kravitz are pretty good at it, but the best fake Australian accent, funnily enough, comes from Elvis's granddaughter, Riley Keough. (Although I might be wrong about all of it, as it was my first viewing.)

Ain't it pretty late for a session of Duck Hunt?

The soundtrack composed by Junkie XL is also pretty top-notch, as it combined bits of electronic music, tribal drums and wicked guitar in it. My particular favourite is 'Brothers in Arms', which is the ones that was played in the trailers, but it also have some sweet orchestra on the second half. ShadeOfLight will be proud.

Now, the bad part? Other than relegating Max as a secondary role and the movie effectively ruined my hype for the next Star Wars? Pretty much no. I'm very satisfied with this movie.

Another lovely day for Max.

In the end, Mad Max: Fury Road is not only the movie of the year for me, it's also the greatest big-budget Ozploitation movie yet, and dare I say, one of the most important movie of all time. Aussies can now be proud of their next national treasure (That means I'm looking at you, Nekro.). So what are you waiting for? Hurry up and get a sick leave and watch this movie ASAP! I'm planning to watch this movie again as I'm typing this!

And as always, another Mad Max review, another round of bad fanarts! 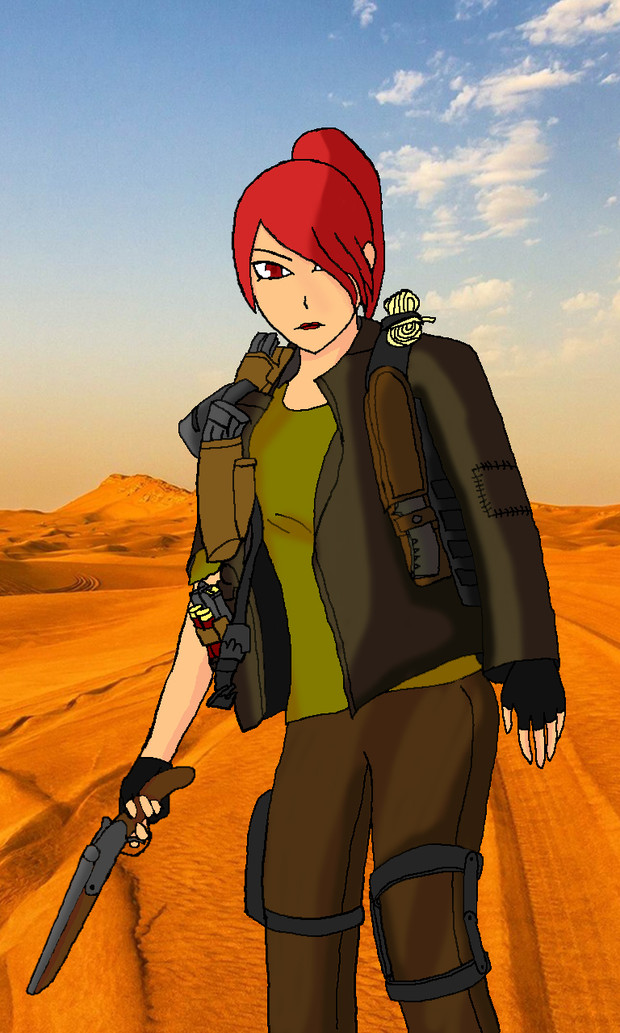 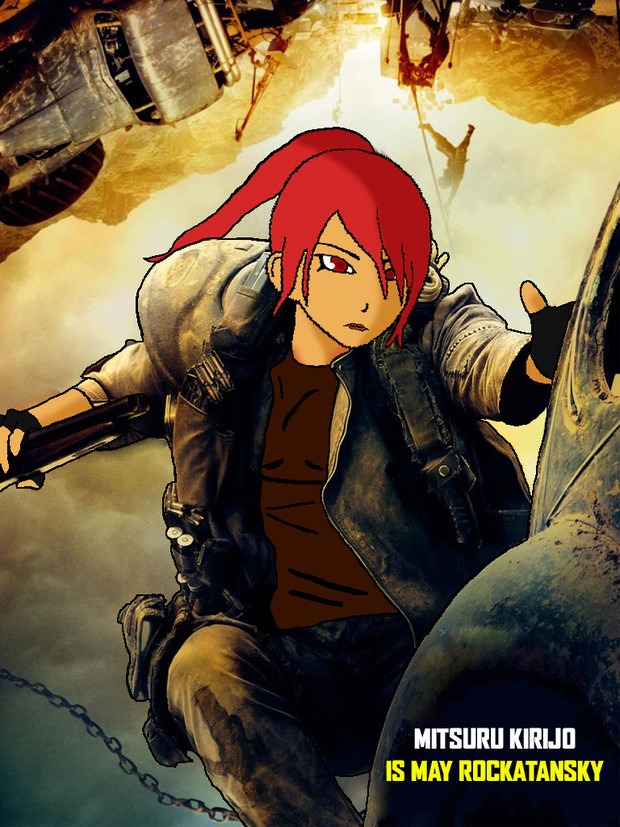