On the one hand, I feel a little daft posting here today. Like a man who wants to cook a bacon sandwich despite the fact the house is on fire. There's a lot going on here, most of it not-so-great, and my silly little blog about a pretend dinner party seems a tad out of place.

On the other hand, I want to post here today, because I've always loved posting here. Your guys and gals are (as you are fully aware) awesome people. Plus, I've already written the flippin' thing and I enjoyed doing it. If it adds a little positivity, that's great. If no one reads it, well that's my own fault.

This week is a twofer. The next two guests I would invite have a lot of similar traits, and it seems sensible to introduce them side by side. Firstly, they are both scientists, though their fields of expertise do differ. Secondly, these men are true intellectuals – men of ideas, creativity and invention. Thirdly, they are very gentlemanly in their own ways. As such, they contrast the rough and ready natures of my first two guests. 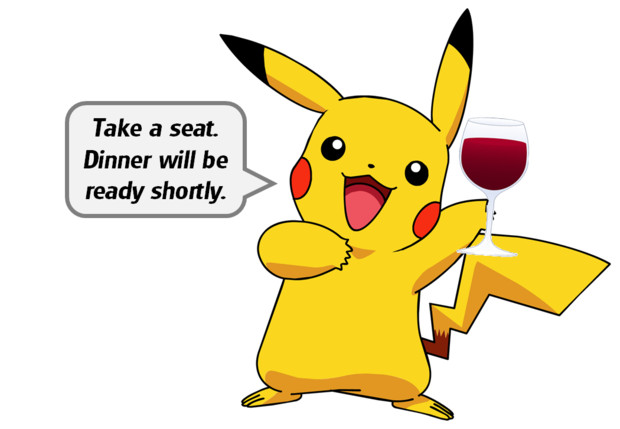 So far, Alyx Vance and Jim Raynor have been invited to my make-believe evening of food, drink and entertainment. Whilst these two characters are a little rough around the edges, I believe they would make excellent house guests. Having said that, a little refinement wouldn’t hurt; guests #3 and #4 will add a touch of civility to the evening, without butchering the light-hearted atmosphere I’m aiming for. They’re both odd, awkward fellows in their own ways, but they are sure to make for good company.

There are geeks, and then there is Otacon. He’s a top-notch hacker, a huge fan of anime and an inventor of gadgets straight out of science-fiction. He has a near-perfect memory for a huge range of nerdy cultural references; he can tell you everything you need to know about the entire population of Smash Bros. He’s even named after a robot. 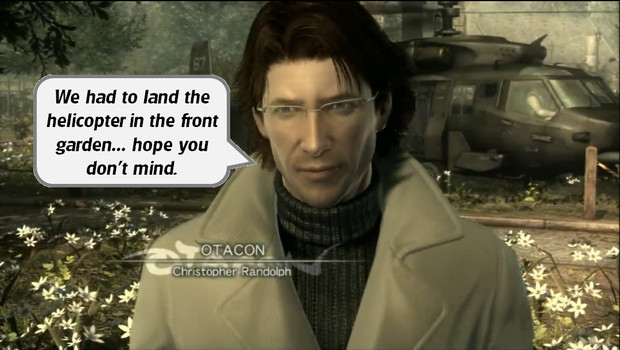 I’m fond of Hal because he’s unashamedly geeky. He demonstrates some of the stereotypes of a geek – clumsiness, social awkwardness, etc. – but he doesn’t hide his nerdiness. Many’s the time that Otacon will go on anime or gaming digressions during his conversations with Snake. He uses his knowledge of robotics for good, creating awesome gizmos to keep Snake alive. Despite becoming an adoptive father and a ladies’ man of sorts, Hal Emmerich has never truly shed his original geeky roots.

In my mind, Otacon is a cornerstone of the Metal Gear Solid series despite only occasionally appearing on the other side of Codec. He’s Snake’s ally and friend, but also a vital source of narration and exposition. Whilst these codec conversations can be very long and tangential, I rarely find myself bored of Otacon’s comments (at least on the first play-through). His guidance during boss battles has often proved decisive. We owe a lot to his quick thinking.

It’s astonishing just how easy it is to bump into skilled warriors in Mass Effect. Expert gunmen and formidable psychics seem to be more prevalent than regular NPCs. By the end of Mass Effect 2 shepherd had scooped up a soldier from every almost every species, each of them as deadly as the last. Even when the crew just needed a scientist, they managed to grab a geneticist with the power to burn, freeze or paralyze his foes. 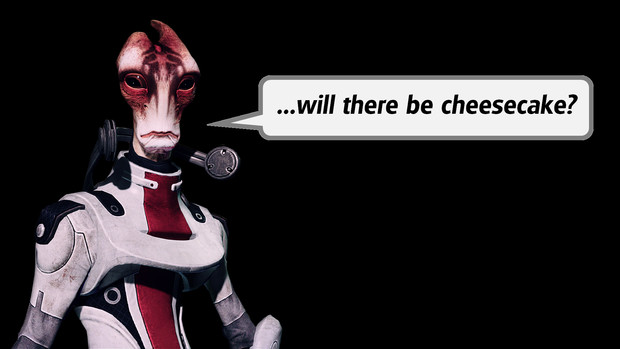 Yet the Solarian scientist is more than that. Mordin is quick-witted and thoughtful, inquisitive and logical. He has a taste for theatre culture and film noire aside from his passion for the sciences. Whilst he has committed some pretty heinous acts in his passed, based on a detached logic, but he shows a thoughtful remorse for his decisions. Dr Solus demonstrates great intelligence and wisdom; much more sagacity than most creatures under the age of forty.

As with Otacon, Mordin Solus is a great source of conversation within each game. Mordin serves up a bunch of elaborate dialogue options whilst residing on the Normandy. Whilst I often become impatient with NPCs who attempt to regale the player with their entire life story, I rarely feel fatigued listening to Mordin’s responses. He’s manner of speech is oddly charming; at times succinct, at other times over-elaborate and colourful. He has an impersonal response to most questions of morality, but he is almost always charming. His alternative version of The Major-General’s Song is one of the most pleasing tangents a Non-Player Character has ever taken.

Now that four of my six guests have been invited, seating arrangements become important. I wouldn’t put Mordin and Hal side-by-side – they may become too engrossed in scientific debate during the party. I also wouldn’t place Mordin directly next to Jim; his experience with alien races may lead to a small amount of tension. Alyx on the other hand has had a relatively sensible relationship with wise and friendly aliens in the past. 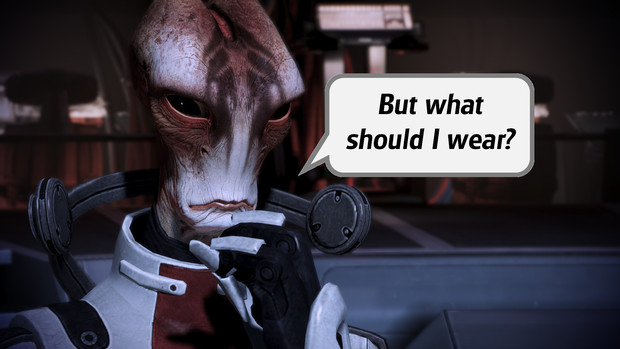 So that would mean that Emmerich and Raynor could be sat together, which also makes a lot of sense. Despite being a geek to his core, Otacon has already fostered a great friendship with one grizzled war veteran with a penchant for front-line combat and smoking. Furthermore, Hal would love to hear all about Jim Raynor’s adventures in space, especially when it comes to giant mechs.

I decided that Vance and Raynor would appreciate a stodgier, less fanciful dinner. They both come from apocalyptic environments and I doubt that tiny plates of fine cuisine would go down well. I don’t really believe that Otacon would be too put out by this kind of meal, but he may appreciate a Japanese flair to the food, playing on his love of anime. Maybe some Yakitori for the starter?

As for Mordin, a little research into his dietary requirements may be in order…

Four down, two to go. I’d decided early on that six guests would be the ideal number to invite. These people are from different worlds, or versions of earth, and will have a lot to share with each other. They combine well with each other because of similar interests or because they are used to similar friendship groups. Above all, they are all really great people, and some of my favourite characters throughout the video game multiverse. 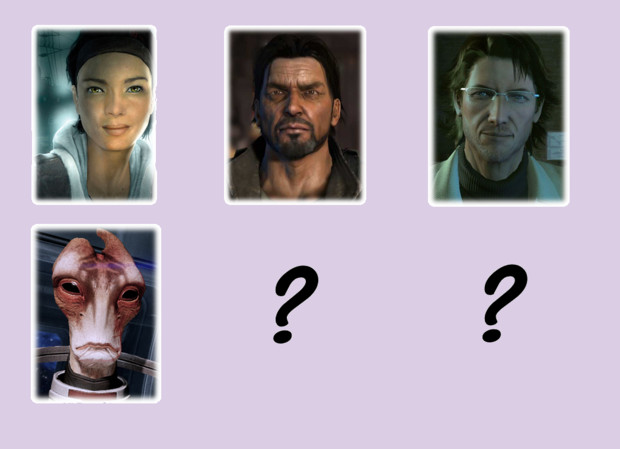 Do you disagree with any of my choices? Can you recommend a good main course that would suit everyone? Do you have any new ideas for which game characters would attend your dinner party? Let me know. If you want to invite the same people as me, just make sure our evenings don’t clash.