Is The Witcher witching up an overzealous gaming brew or are they just showing off? The most recent trailer released for the game spends five minutes extolling all the things they jammed into this game.

The Withcer 3: Wild Hunt stands to be a massive game and, given their relatively small list of published titles, it gives me a little pause. When I look over yonder towards one of their western contemporaries (I’m looking at you Bethesda), I see a company who has been doing this much longer, and they still struggle under the weight of producing something so massive. I love Bethesda’s output, but their games always come with a cadre of issues. Can CD Project RED truly pull of something of this scale without it crumbling under its own Herculean weight?

Just look at the graphical upgrades between sequels. Here is what Bethesda did in over five years:

Now, here is what CD Project RED did in less than four years:

While Elder Scrolls still languishes in the polygonal ghetto, CD Project RED just said, “Screw this, lets make this thing gorgeous.” Granted, The Witcher 2 was not a massive open world, but The Witcher 3 is. It’s borderline cruel to other companies. Where do they get off making everyone else look like a bunch a layabouts? 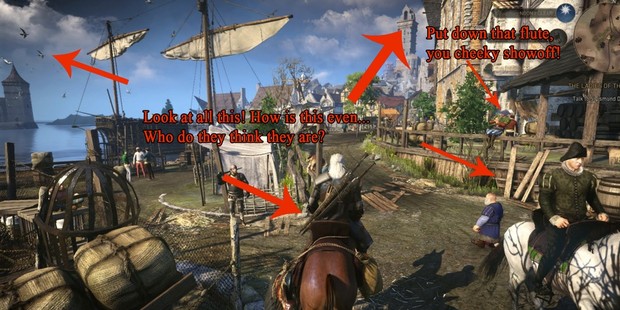 CD Project RED’s small list of titles is nothing to sneeze at, however. The Witcher series has been tremendously successful and brings with it a reasonable chunk of clout. The impressive upgrade they made, from the original game to Assassins of Kings, is shocking; if they can manage a repeat performance, the results would be legendary. They would be throwing the gauntlet down at the feet of the old guard, flashing a sly wink, and dancing off into the sunset while the crusty old companies stand dumbfounded.

I see it as an underdog story—mostly because I like it when things get shaken up. I want these scrappy upstarts to come out swinging like wild animals. I want this game to come out and not be in a state self destruction: I want it to be complete. If for no other reason then to make some of the old guard scratch their heads in bemusement. I remain overly optimistic because their output, lean as it may be, is a masterclass in quality over quantity.

I am an aspiring writer hunting for sweet exodus from my current day job.