Some cool Art Prints I got (NVGR)

So our beloved black grandmother Occam's has posted some blogs of the fantastic artwork and statues he has collected and not long ago that Sexy Muffin Seymour Duncan (I totally didn't realized that rhymed til after I typed it) posted some of the cool stuff he's collected over the years as well. So I thought it might be cool to do something similar and show off some stuff that I've collected and am proud to own.

So to start off with, last year on a whim I decided to go to Fanimecon. I had no idea it was going on and was coming home from work when I passed by the convention center and saw the plethora of cosplayers walking the streets. I had never been to any convention before and so I decided to buy a 2 day pass to check it out the last 2 days. It was spur of the moment so I ended up going by myself and wasn't sure if I would end up having a lot of fun. As it turned out I had a blast checking out the booths and panels, meeting people, taking pictures and just overall enjoying the atmosphere.

In the end I spent a good chunk of change on buying various prints from some of the many incredibly talented artists there. You'll have to forgive me though as I unfortunately can't remember most of the artists names. Also sorry if the pictures are a bit fuzzy. The Lighting in my room is weird.

First here is a print of an awesome watercolor painting of The Legend of Zelda: Ocarina of Time as portrayed in the classic Star Wars: Return of the Jedi poster. This was painted by Britt Hover who had many many fantastic watercolors including ones for Twilight Princess and Skyward Sword in similar fashion. As a childhood fan of Ocarina of Time though this one resonated with me the most, though if she had a Majora's Mask one I would've been all over it. 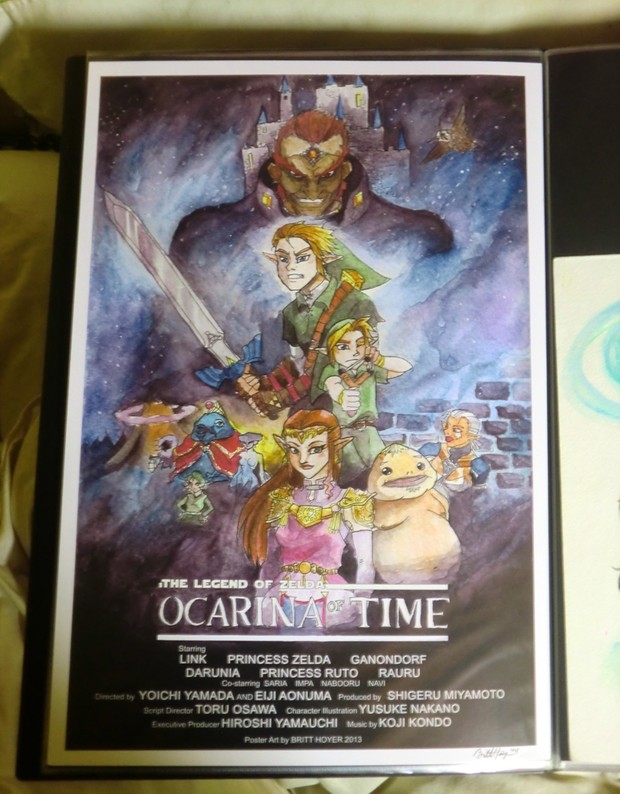 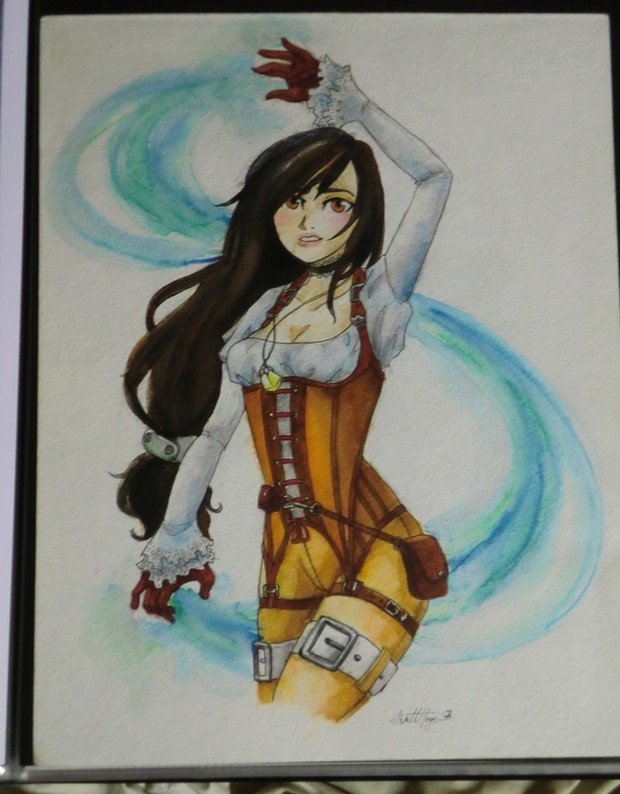 Next following up watercolors is an awesome print of an oil painting of Carl from Aqua Teen Hunger Force. I saw this one from all the way across the hall and B-lined it to this guys booth to get one of these. 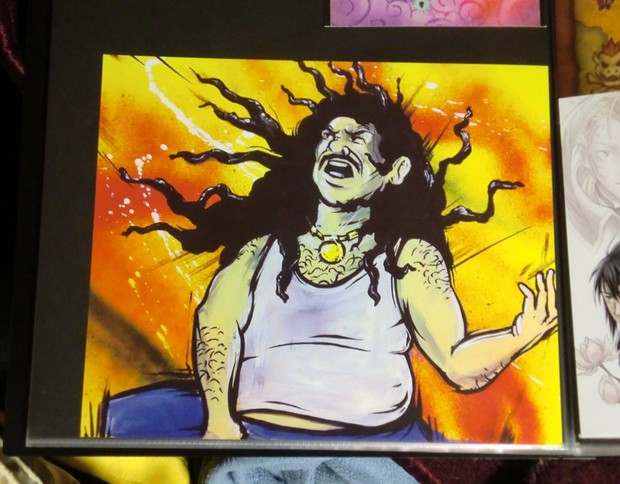 I saw next one of Team Rocket from Pokemon and just thought it was adorable. I haven't watched any of the shows or played any of the games for a good decade now, but Pokemon is still something that I hold dear from my childhood so I thought this would be cool to get. 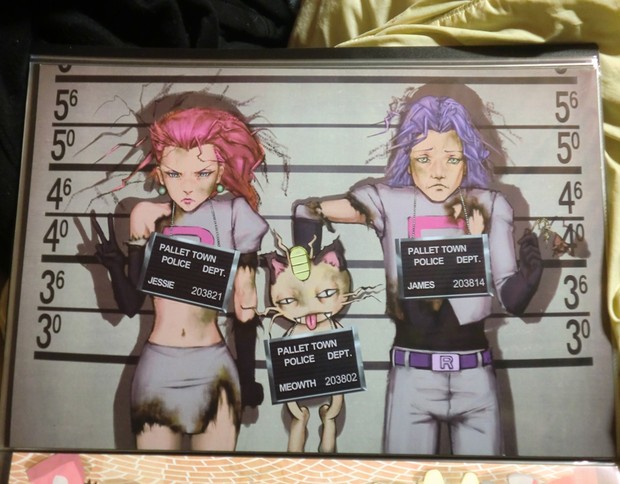 This next one is definitely one of my all time favorites. I honestly haven't watched a whole lot of Anime, but Cowboy Bebop i'd say is my favorite one I've seen so far and this crossover with Pulp Fiction is fantastic. 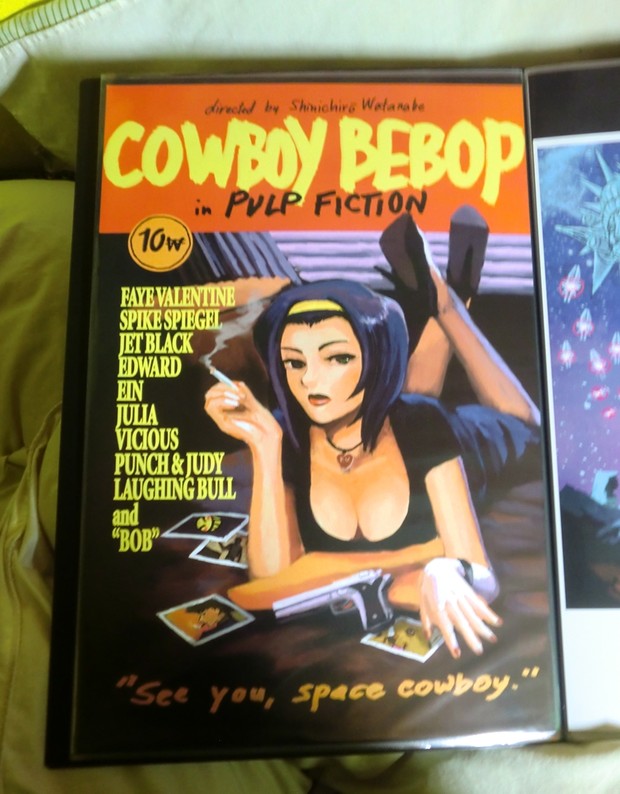 Following that is this Space Dandy poster also done up in the style of the classic Star Wars poster. Like the Zelda one, I think the combination works quite well. 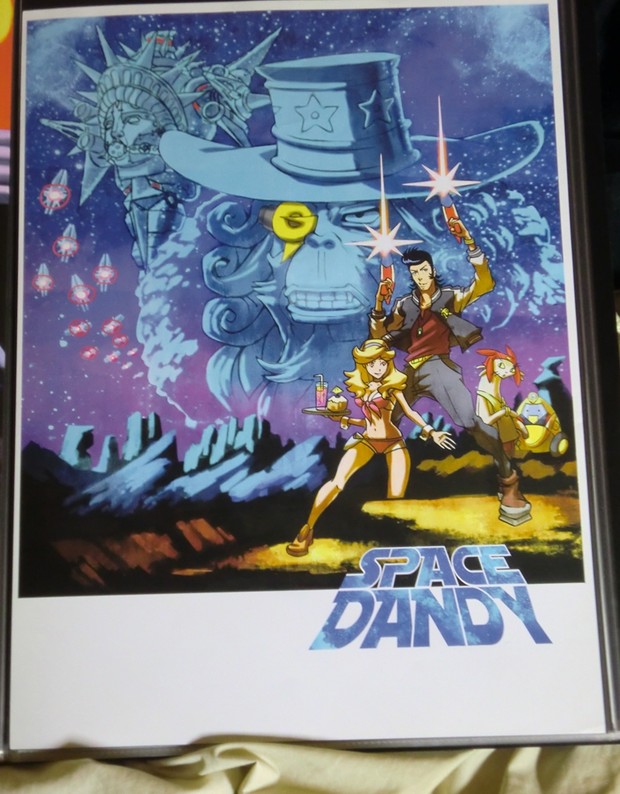 These next three were all from the same artist who unfortunately I can't remember his name, but I love these pieces. First is this Zelda print encompassing roughly every major character you can think of from the series to date. I can't imagine how hard it was to figure out how to fit all these characters on here. 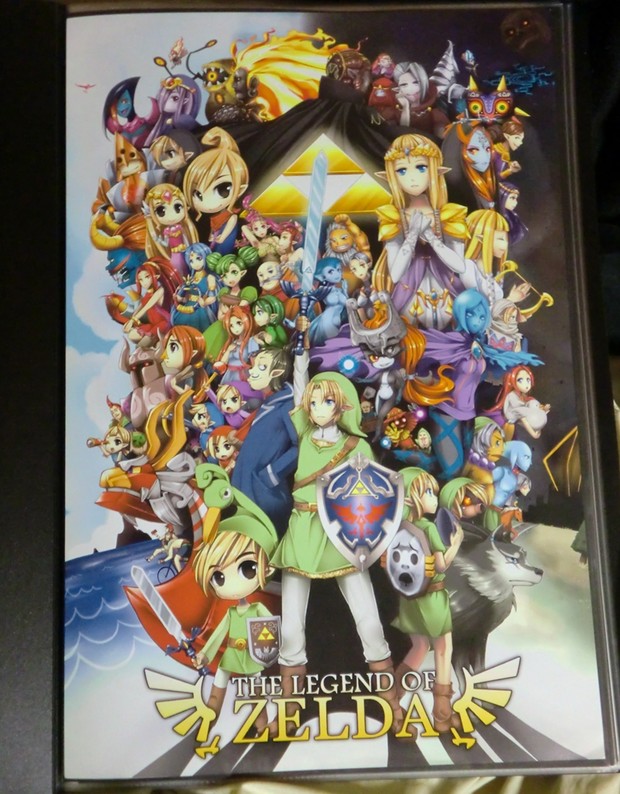 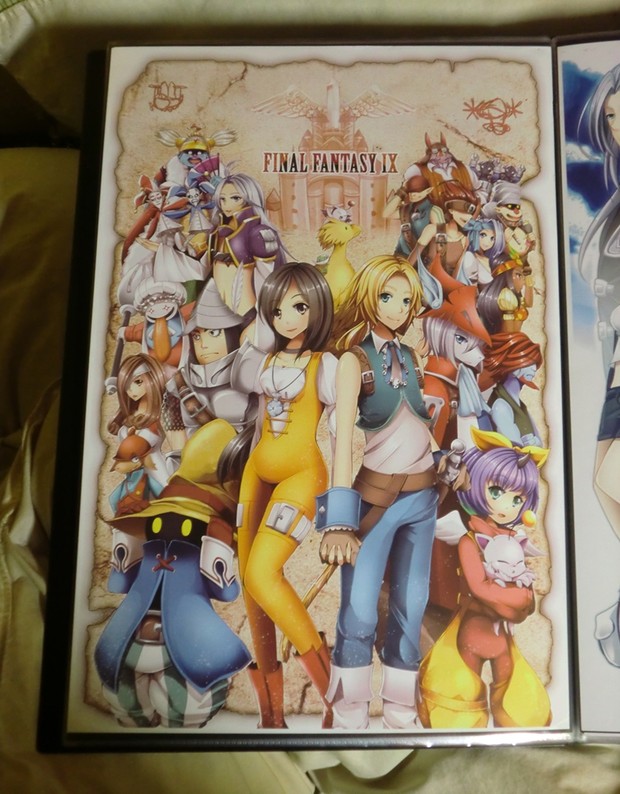 This next one I picked out because the artist had a buy 2 get 1 free deal so along with the Zelda and FFIX print, I decided to pick this Final Fantasy VII print. Confession, I've never actually played Final Fantasy VII, but I do like the characters and this print is pretty sweet. 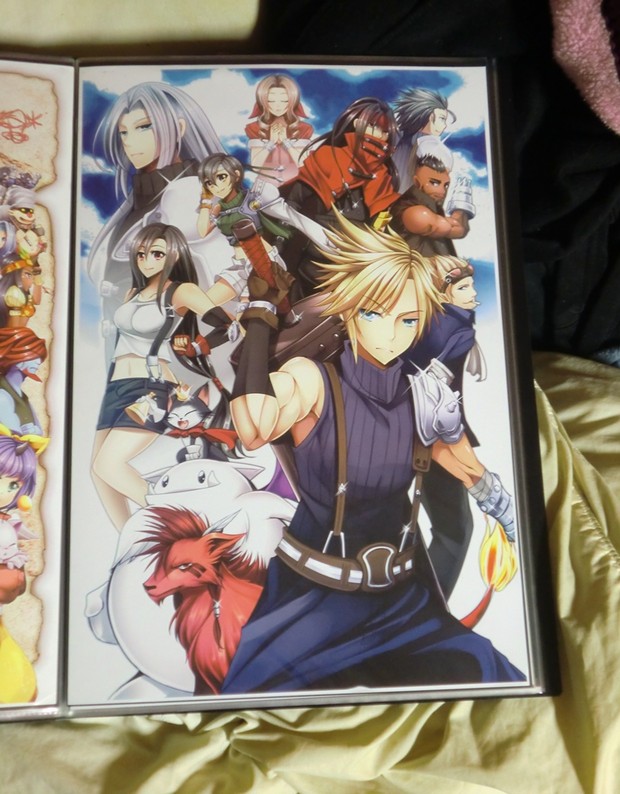 This next one of Morrigan and Lilith from Darkstalkers was done by Jessica Gaona who also go's by Jessie Con. She also had all sorts of cool prints of some of the male Street Fighter Character's if they were women. When I saw those along with thise I decided I'd also commission a drawing from her. 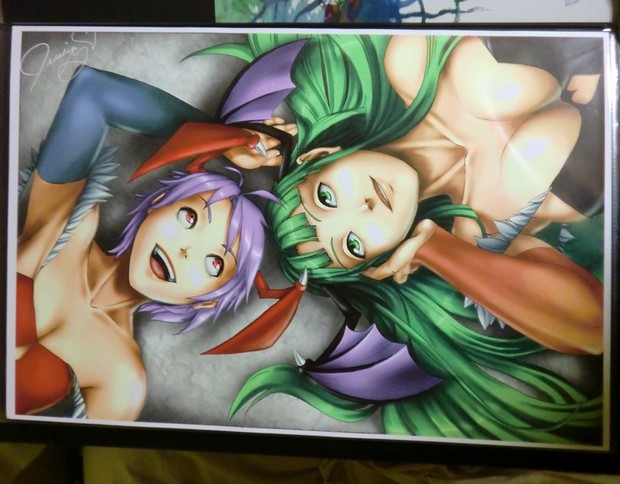 I've talked many times before about my infatuation with Lulu from Final Fantasy X, so while at the convention I was on the hunt for a print or poster of her. Unfortunately I couldn't find any so I decided to commission a sketch of her from one of the artists. I saw some of the work Jessie had commissioned for other people and decided that she would be more than sufficient. She also cut me a deal as she had decided to start doing digital sketches and decided to start with mine. She ended up sending me this which is way cooler than I expected it to be. 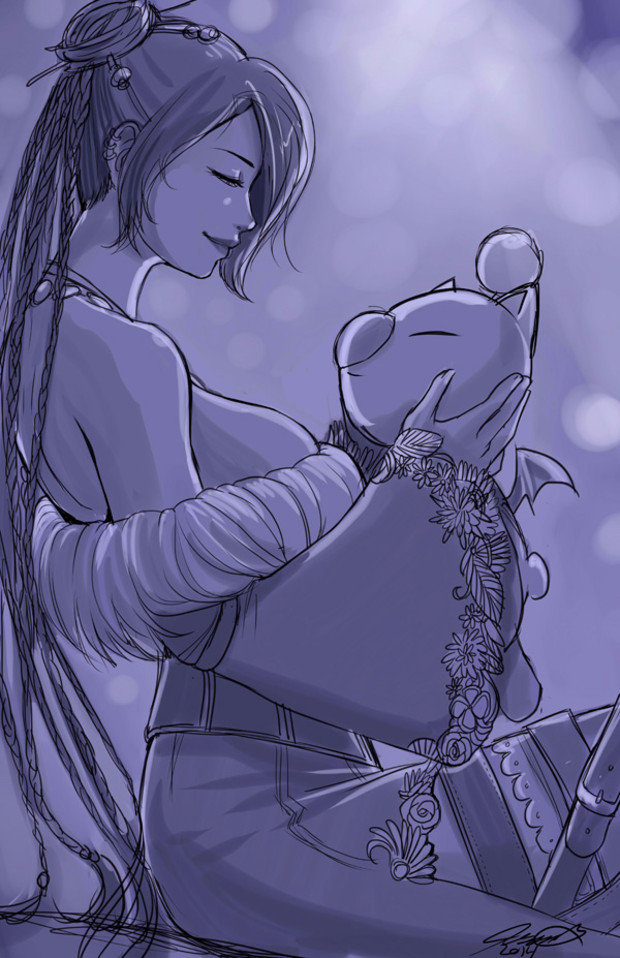 Finally, on the last day of the Con, I heard that famous cosplayer Yaya Han had a booth set up. I'm quite a fan of her work so I was excited to be able to see her. I'm a big fan of Who Framed Roger Rabbit so I had to buy her print of her as Jessica Rabbit. She was incredibly sweet and she hugged me after signing it for me. 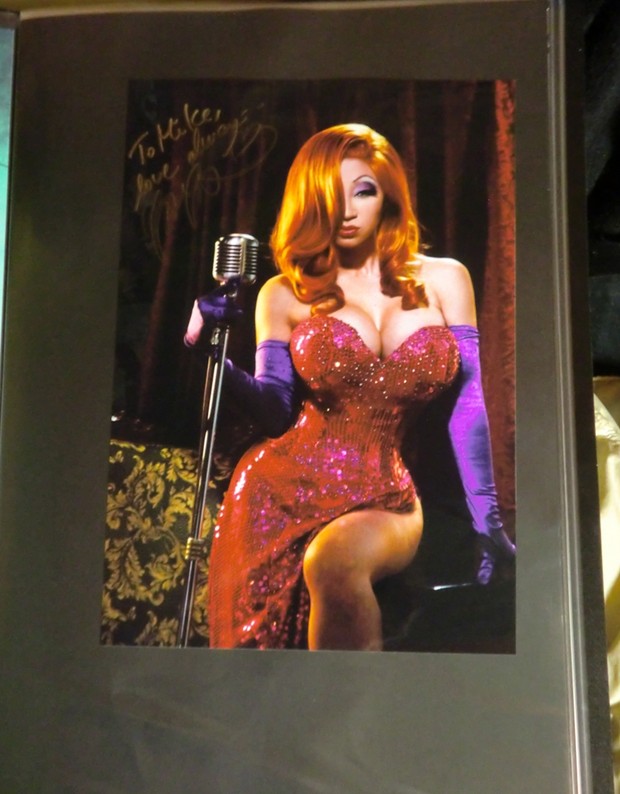 Fanimecon is at the end of Next month and I'll definitely be going again this year along with hopefully talking some of my friends into going as well. I had an absolute blast and I recommend anyone who's into anime and is in or near the Bay Area to check it out. I hope you guys dig some of the stuff I got.