Note: I wrote this piece earlier this year and never did anything with it. In the interest of sharing a unique game with a larger audience, I figured it should be posted here.

Everyone has fears, dreams and loved ones. If you dig deep enough, you’ll realize that the gap between two random people isn’t as big as you think it is. In fact, it’s quite small.

It’s not often that a video game can instill such wisdom upon its players. This philosophical sentiment comes from VA-11 HALL-A, a sci-fi bartending simulator from Sukeban.

VA-11 HALL-A is a surprising title. As a self-proclaimed ‘Cyberpunk Bartender Action’ game, 'VA11 HALL-A' instantly sets itself apart from any other game on the market. The game’s unique, genre-bending status is not what makes it so genuinely compelling however. VA-11 HALL-A has it, whatever it is.

After playing through the Prologue chapter of VA-11 HALL-A, it is clear that Sukeban's efforts to create a world that is both immersive and genuinely worthwhile have not been in vain. The experience through VA-11 HALL-A’s prologue is a strange one, filled with bizarre interactions, entrancing writing (much like the philosophical rumination at the beginning of this post), and more Corgis than you can shake a stick at. 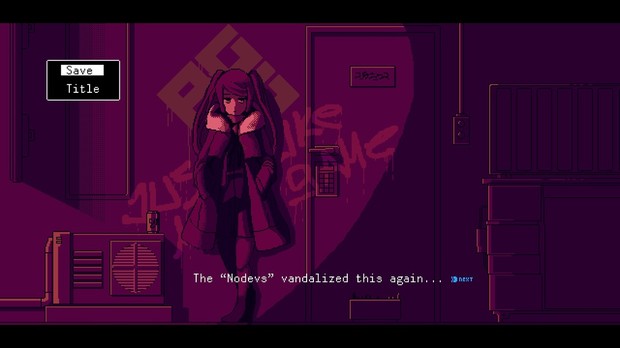 As the bartender at the titular establishment, the player is instantly put in an exciting -- and unique -- position upon starting the game.

Humanity’s long-standing love affair with alcohol is well documented across all media, and VA-11 HALL-A’s strange cyberpunk setting is perhaps the most promising entry coming from the video game world.

VA-11 HALL-A is not so much a game about being a bartender, but rather an examination of interaction and understanding set against the neon backdrop of a cyberpunk setting.

The game’s dystopian, cyberpunk setting allows for anything to be possible. In the prologue, players are introduced to a strange, yet somehow familiar world. VA-11 HALL-A’s central location is one that is small, as the entirety of the game takes place directly in the bar, but still creates a sense of scope -- despite your time spent behind the bar, the dystopian wheels of the city are still turning.

Life goes on. Customers come in and out.

From its outset, VA-11 HALL-A has the ability to pull the player immediately into its world. Starting simply, the game presents players with a series of news headlines. These headlines are often humorous, but give the player a sense of place in VA-11 HALL-A’s cyberpunk streets.

Upon heading to the bar, VA-11 HALL-A’s experience begins in proper. As the bartender, it is your responsibility to pick the watering hole’s music. The game’s jukebox offers a wealth of great musical selections, all which add an air of atmosphere to the already engrossing presentation of VA-11 HALL-A. The synth-heavy sounds that echo throughout the bar add a level of noise that captures the experience of pulling oneself up to a bar and soaking in the surroundings. 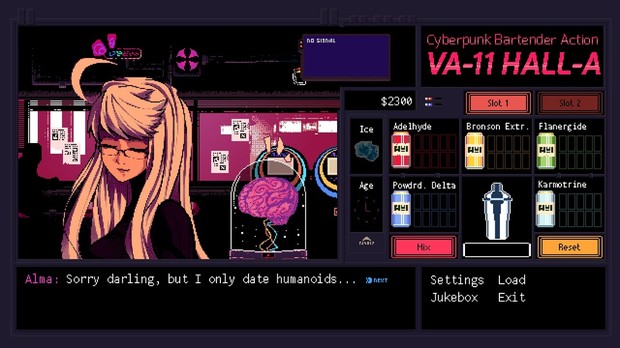 Plot wise, VA-11 HALL-A’s prologue introduces players to a wealth of Corgis. For reasons that are illuminated upon through interaction with your bar supervisor, the Corgis have booked 'VA-11 HALL-A' for a few nights, much to your character’s dismay.

The beauty of being behind the bar -- and, ultimately, VA-11 HALL-A’s greatest strength -- is how simple it is to fall into the routine of tending to the colorful clientele that wander into through the bar’s door. As you make your way through each night at the bar, you are treated to a host of humorous and memorable interactions with any number of races and species. The cyberpunk setting of VA-11 HALL-A allows for sentient robots to share the same space as speaking animals and android sex workers, all in a way that feels natural.

Making drinks in VA-11 HALL-A is a relatively simple affair, one that comes naturally. When a customer orders a beverage -- often a punny, futuristic concoction -- you are given instructions on how to craft the drink from the available chemical compounds. Once the ingredients are supplied, the drink can be mixed, blended, aged or served on the rocks.

Learning the different drinks becomes something of a game in and of itself. Throughout my time playing VA-11 HALL-A, I was constantly excited to get my next order and see if I could make the drink without referring to the instructions. It’s rare to feel yourself take some kind of pride in your work when playing a video game, but VA-11 HALL-A’s simplicity and intuitive mechanics make this a reality.

Similar to the pride one can feel from mastering mixology, VA-11 HALL-A’s main draw, the wonderfully crafted and nuanced characters that frequent the bar, are rewarding to serve and interact without. The two main characters you interact with during the prologue, Deal and Betty, are an exemplary depiction of the diversity one can find in VA-11 HALL-A’s cyberpunk setting.

Over the course of the booked weekend at the bar, I found myself constantly drawn back to Deal and Betty, eager to get to know them. With alcohol serving as a social lubricant, these characters become fleshed out, sharing opinions and flaws to the player, each conversation more interesting than the last.

Thanks to the game’s backdrop futuristic backdrop, conversational topics ranged from interspecies marriage, to human enhancements and determinism -- the kind of talk that is pitch perfect when placed in a cyberpunk hole-in-the-wall bar.

Numerous times, the allure of these conversations brought me further into the game’s universe. I found myself nodding sympathetically when hearing Betty’s feelings, tapping my toes to the pulsing music playing from the bar’s jukebox. VA-11 HALL-A, better than Telltale’s titles, manages to craft the kind of experience that the player genuinely feels invested in while playing a key role at any moment in time.

I could go on about my time spent behind the bar and the candid conversations I held in between Gut Punches and Big Beers, but I fear it might take away from the experience earned from playing it. Roll up your sleeves, stick the bar, and head to VA-11 HALL-A yourself, by checking out the game’s official website, waifubartending.com. From there you can download the game’s prototype demo, or purchase the prologue and soundtrack a few dollars. The experience, atmosphere, and brilliant writing that you will find in the cyberpunk landscape of VA-11 HALL-A is one that demands more attention.