Ooh, what’s over there?! #2: She sells sea shells by the cell-shaded sea

Today, let’s explore the world of The Legend of Zelda: The Wind Waker.

March seems to have become the month of Zelda on Destructoid. At least, that's what the Band of Bloggers folks have decided. Well I don't know about you, but I'm not one to argue with Zelda. Plus, just this week it was announced that the "Legend of Zelda: Symphony of the Goddesses" concert is finally coming to the Netherlands this year! I've been waiting for that forever, but the time has finally come. So yeah, I'm feeling Zelda all up in my private parts. So let's take a trip now, and sea what we can sea.

On first glance, you might be forgiven for thinking that the world of The Wind Waker isn't all that. Indeed, compared to something like Xenoblade Chronicles it might even seem a little uninspired. Well you'd be wrong. I take back what I said before, I would never forgive you for thinking that.
I'm sure you're all well acquainted with the Great Sea. Wind Waker takes place on a vast ocean that stretches as far as the eye can see. There are a multitude of small islands to be found on the watery waves, which is where your adventure will take you. There's a lot to do on these islands and a lot of different people to meet, which we'll be getting to in a second. Ultimately, the Great Sea is in fact great (and also a sea), and it shouldn't take you very long before you want to explore the whole thing.

There is one thing in particular about this game that invites exploration more than almost any other game. Freedom. Within an hour after starting the game you will get yourself a lovely little ship. Another couple of hours after that, you will have a sail to go along with it and the winds are at your command. From that point on you can go anywhere you want to go, do anything you want to do. Every island on the entire ocean has something to do on it or something to go and collect. So, do you want to go to the next dungeon right away or would you rather go sidequesting for ages? You can sail to the other end of the world if you want, and chances are good that there's still something to do there.

Even if you chose the former option, chances are you're going to get distracted. The Wind Waker is spectacularly good at keeping you occupied even when you think you're just going to sail to your next destination in a straight line. I think the main culprit here is the fact that you can always see some island or other off in the distance. It's like the game is deliberately telling you "Hey, I know you're busy, but there's some loot on this island over here that you really have to come get." For example, take a look at this: 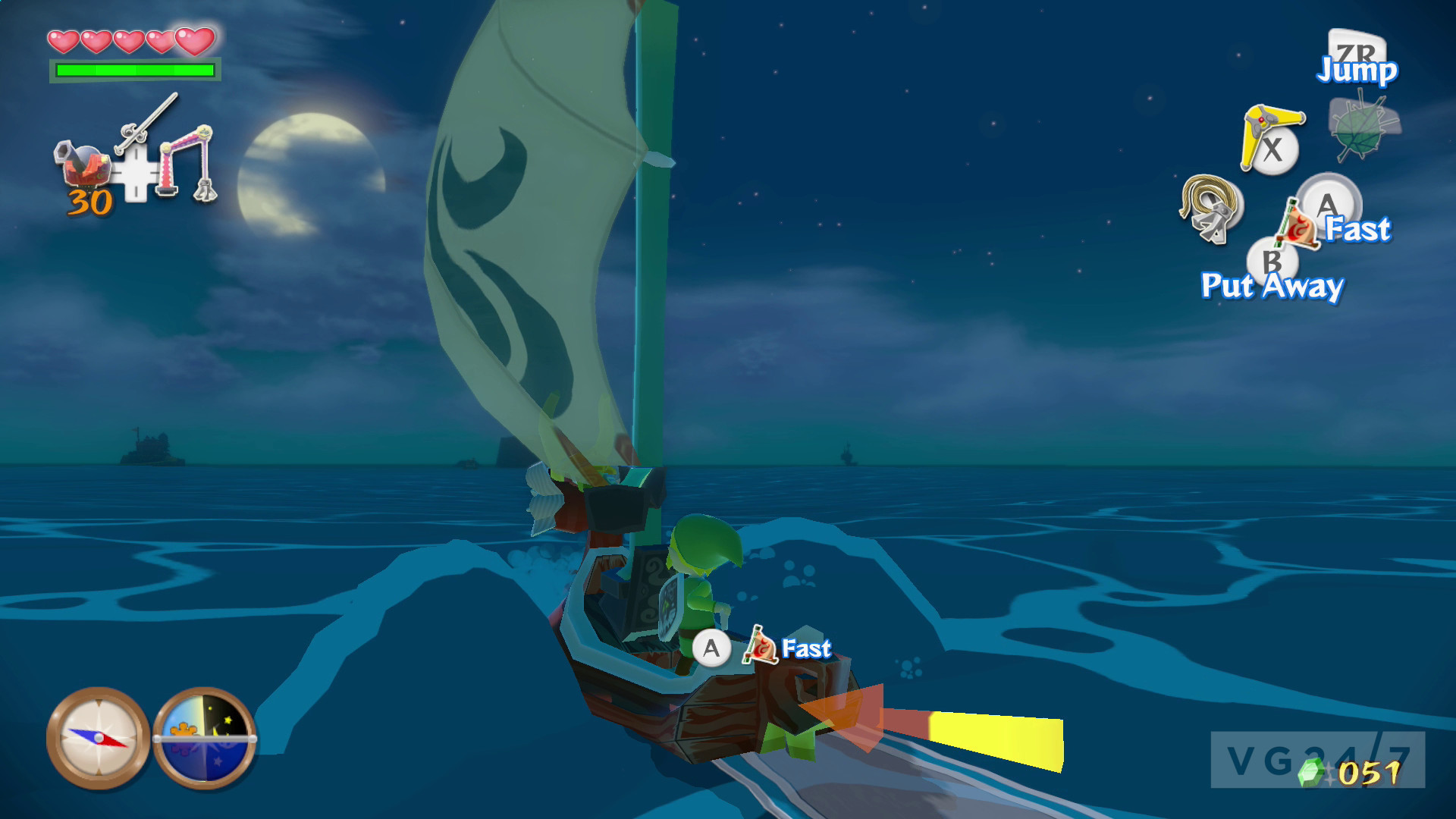 That's three different islands right there. Each can be reached in about two minutes tops, and each might have some good stuff lying around. One might be the home of a Great Fairy who can upgrade your magic, one might house a heart piece, and the last might be a red herring until you find the hookshot. There's only one way to find out though, and that's to haul yourself over there and go check. That's something you're constantly going to be doing in Wind Waker, as new unexplored islands are never far away. Just hoist the sail, and you can get there in a jiffy, especially in the HD remake. That's something that this game absolutely nails by the way. Especially in the WiiU version, the game simulaneously gives you the feeling of sailing around on an expansive sea while still making every individual island seem like they are within easy reach.

Of course, none of this would be all that fun if the Great Sea itself wasn't inviting. You don't want a dirty, drab expanse of water with nothing of note anywhere, and you certainly don't want boring grey depths. Fortunately, anybody who's even the slightest bit familiar with Wind Waker will know that the Great Sea is a stunning place. The big selling point here was always the cell-shaded art direction. Although they were criticised when the game first came out, gamers have learned to see that there is a timeless beauty in the cell-shaded waters. And how could they not? With so many bold colors on display, and such a characteristic style, it's hard to deny Wind Waker's charm. Pair that with some great explorin' music, and you've got a world you could stay in and explore for hours. 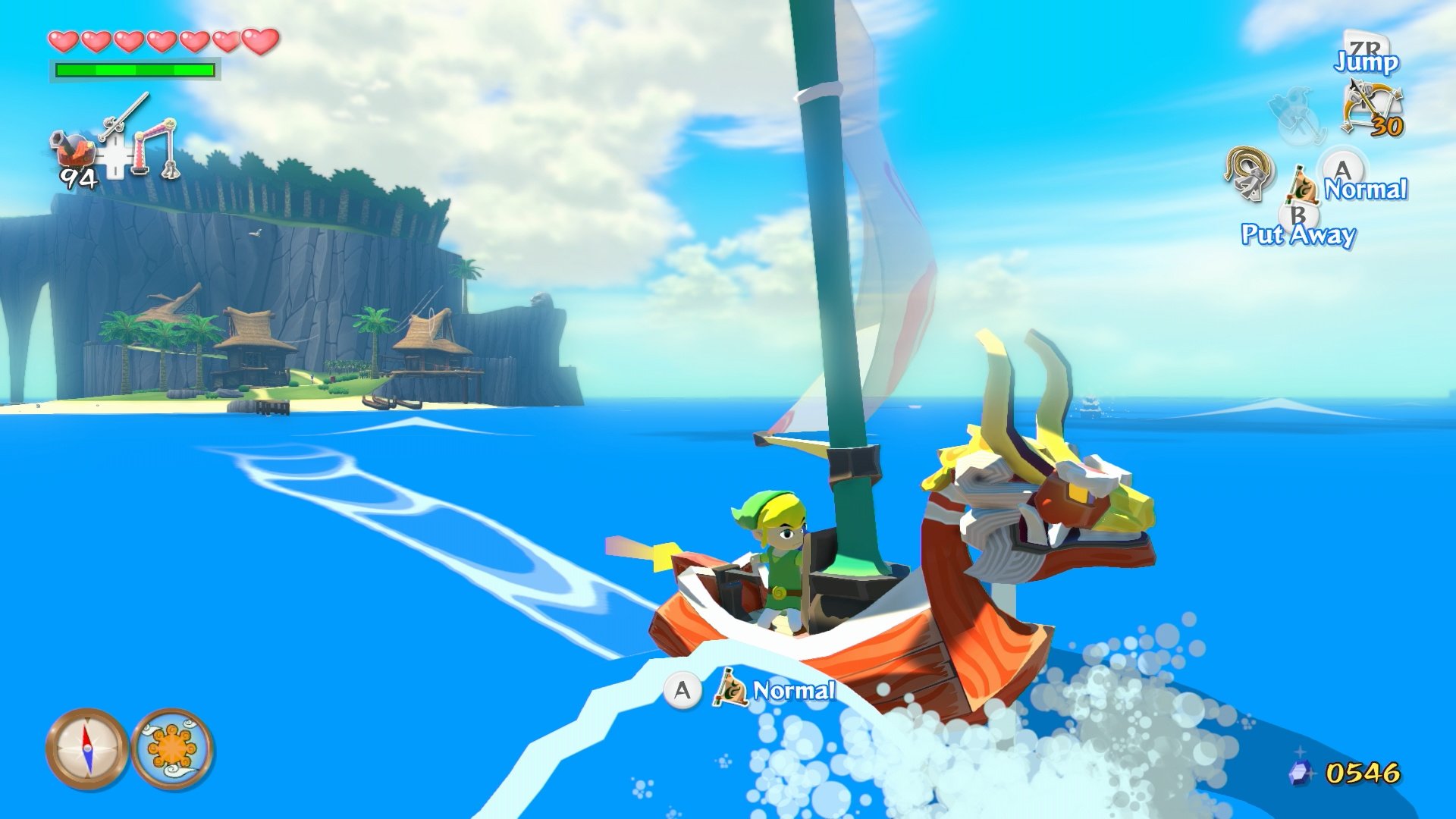 Ultimately what defines the Great Sea for me is the feeling of going on a grand adventure. That moment when you first hoist the sail and speed off into the great unknown was really powerful to me. There's an expansive world in front of you. Adventure is everywhere, and you can go anywhere you want to go. You can meet the bird-people of Dragonroost Island, help out the little plant-guys at the Forest Haven, chill on Windfall Island, raid a pirate's fort, find the Great Fairies of the winds, sail straight into the eye of the storm, explore the edges of the world, or just sail around a bit doing nothing in particular.

It's all good, and it all feels like adventure. To be honest, I'm not entirely sure why that is. I mean, lots of games give you the option of exploring all of the world right from the start. The Elder Scrolls series is almost built around the concept. And yet those games don't quite capture the same sense of adventure that Wind Waker invokes in me. Maybe it's just the ship. Maybe having the King of Red Lions at your disposal, taking you anywhere you want to go, is just inherently liberating somehow. Maybe being able to see all the little islands in the distance gives you more of goal, like you always know where the places of interest are in the world.

Whatever it may be, I would gladly sell sea shells by the cell-shaded sea of The Legend of Zelda: The Wind Waker.

- Favorite thing 'over there': the Tower of the Gods, which you can see from almost anywhere on the map.

- Favorite song to explore by: Ocean theme
Come on, this one was obvious. The Ocean theme is such a big part of the experience of exploring the Great Sea to me, there's no way I could choose something else.