I was writing a review for Tales From the Borderlands' second episode, 'Atlas Mugged' this morning and couldn't shake the feeling that the game sort of felt stale.

This doesn't mean that the episode, or the series as a whole, is bad by any means, it's just interesting to note how not every game (or franchise) that Telltale works on fits into their established structure.

If you haven't played 'Atlas Mugged' yet, I'll avoid any plot spoilers, but I do want to take some time and address how Tales From the Borderlands is hampered by its creators. 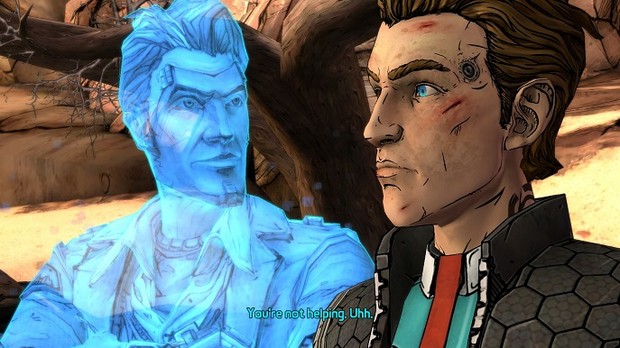 Telltale Games has built a name for itself with the massive success of The Walking Dead. Already a massive hit across popular culture, The Walking Dead's graphic novel source material lends itself naturally to an episodic adventure. We have an obsession with zombies and survival in a post-apocalyptic setting, something Telltale managed to capture in the two released seasons of The Walking Dead.

Perhaps the greatest strength of The Walking Dead was that players forged an emotional connection to its main characters. Lee and Clementine became great inserts for the player, creating for an easy transition from distanced gamer to active participants in the drama of each episode. Because of this, players felt the tension of each choice and feared the potential consequence of every interaction

The biggest problem with ‘Atlas Mugged’ (and perhaps Tales From the Borderlands as a whole), is that the game so desperately wants to be its own unique franchise, but it is stuck rooted in the established framework of the signature Telltale formula. 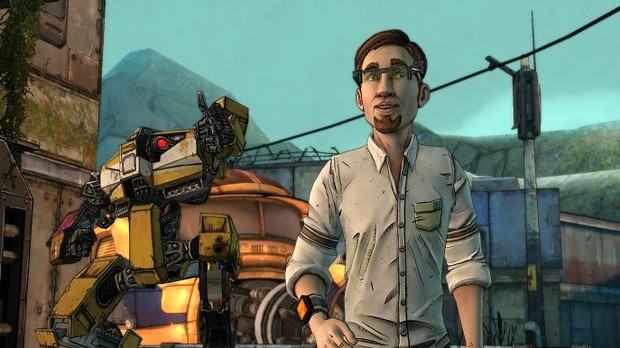 The Borderlands games have built a reputation and following off of the quirky characters and semi-absurd humor of Pandora. Tales From the Borderlands attempts to capitalize on this, but fails in the translation.

As anyone familiar with the work of Telltale Games will know, players control their characters in static environments, with different points of interest of people to interact with throughout the scene. This stays true in Tales From the Borderlands, but somehow feels much more stale than in other Telltale efforts.

Unlike The Walking Dead or The Wolf Among Us, the tension of Tales From the Borderlands is never really present. Rhys and Fiona, along with their traveling companions are constantly in danger from any number of pursuers, but in ‘Atlas Mugged’ the constant threat does not translate well.

Throughout the ninety minute episode, there are only a few moments where the player’s input actually matters. This is not to say that there needs to be a ‘epic’ choice ever second in Tales From the Borderlands, of course, but it does make the player feel as they are more a passenger than an active participant in the narrative.

In between these choices is the dialogue of ‘Atlas Mugged’. Both Telltale Games and Gearbox have been praised for their ability to write characters that are actually of interest to the consumer. In ‘Atlas Mugged’, there isn’t much by the way of meaningful dialogue. Branching dialogue choices come much more frequently than the pivotal decision-making moments, but they largely only change the flavor of what Rhys of Fiona says. 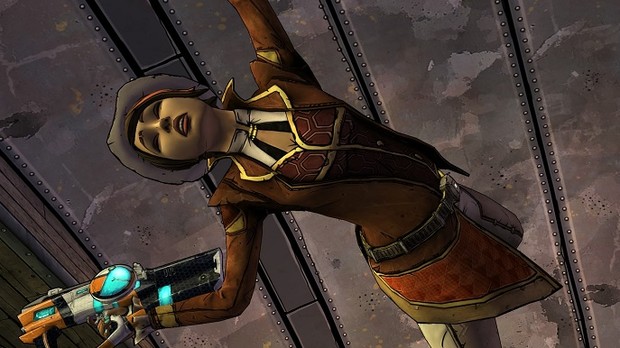 Unlike The Walking Dead’s individual episodes, players never need to think too hard about what options they choose in a conversation. The choices essentially boil down to ‘witty remark’, ‘smug remark’, ‘say nothing’ and a combination between the other options. You never have to fear for your life in Tales From the Borderlands because players have the security net of knowing that nothing can happen to them until the end of the series. The established storytelling device of Rhys and Fiona alternating between flashback-retelling segments removes any sense of urgency or danger to the overall story.

Of course, this is not to say that Tales From the Borderlands is a bad game, or that ‘Atlas Mugged’ is a poor episode. It just strikes me as remarkably ‘safe’, especially considering the over-the-top violence of Borderlands and the signature suspenseful storytelling of Telltale.

Taking a step back and reworking the framework of how each game works is probably the only way to remedy the situation. Life is Strange manages to build upon the ‘Telltale formula’ by using it as a building block. The game’s emphasis on changing the flow of time allows for the title to break free of normal episodic storytelling. Tales From the Borderlands can’t do this in order to stay fresh, but I can’t help but think that doing something ‘more Borderlands-y’ would be a great way to make subsequent episodes stand out.