So I've been meaning to post a new blog on here for some time, but life keeps getting in the way. I'm sure you know. So now I'm doing a little update right now about some stuff I've been reading, watching, listening, and playing. Also, pretty much everything I'm talking about here will be positive, so if you can't handle a gushing, you might want to check elsewhere. I wasn't super inclinded to talk about some of the lesser things I consumed lately, like Aliens: Infestation, The Bureau: XCOM Declassified, Robocop (2014), and The Imitation Game.

So let's get on with it!

I've been meaning to pick up Saga for a few years now, but haven't managed it until recently.

For the unenlightened, Saga is a space opera comic series by Y: The Last Man creator, Brian K. Vaughan. It's strange, sweet, and oh so awesome. The plot follws Alana and Marko [below], a married alien couple who spend their time evading an eternal space war while raising their hybrid child .The series has been going on for around 3 years now, and from what I know will eventually encompass the entire life of Alana and Marko's child.

This series is off-kilter and yet it doesn't feel like it's trying. It's that special sort of strange that you only see every once and a while, where everything feels fresh and new, yet familiar and nostalgic all at once. Check out the design for one of the other main characters Prince Robot IV. The design is strange, and kind of dumb, but it really works! I love it!

It's also of note to mention that this series can be very explicit at times. There's a hell of a lot of gore and sex in this series, with some issues being banned from getting digital releases as a result. Here's a NSFW image from early on:Hot Robot Sex You Know You Want It

I'm only 7 issues in right now, but I'm hooked and very much looking forward to finishing what I have, and then buying more volumes. Check it out!

I also recently bought the definitive history book of Robocop, which I snagged for an incredibly sweet $9. Give it a google. The book's pretty neat so far, and has tons of Robocop 2 behind the scenes!

I finished watching Space Dandy last week, and it certainly was... dandy. I wrote this show off when it first came off. Not completely though! I just didn't think it was a priority watch. Perhaps it was silly of me, but it looked as though the mash up of comedic/dramatic elements that make showrunner Shinichiro Watanabe's previous shows (Samurai Champloo, Cowboy Bebop, Kids on the Slope) so compelling, didn't exist in Space Dandy. It looked... a little shallow. I was very wrong though. While it's still early I think this might be my favorite of his shows. I may have thought it shallow at first, upon watching it, this seems to be the deepest Watanabe's show's so far. There are many scenes that blaned absurd comedy and parody with incredible sadness and reverence. It's a real testament to directing that this show is able to achieve such toanal stability when dealing with these extremes.

There's also a hell of a lot of heavy sci-fi under the hood of all the breast/ass jokes the show makes. Traveling to the 2nd and 1st dimensional planes, life after death, time loops, peace achieved through genetic modification. Dandy goes big.

It's pretty hard to talk about these scenes considering it comes with spoiling the series, and that's something I really would rather not do. Here's a goregous opening though:

Episodes that stood out were A Merry Companion Is a Wagon in Space, Baby," which was excellent in it's own right, but also scored points with me for being an homage to the movie Paper Moon. Also, "A World with No Sadness, Baby" seems to be many people's favorite episode, which I'd agree with!

It's also cute that Woolongs, the currency from Cowboy Bebop are used in Space Dandy. While googling the fake currency, I found this neat little site that actually makes them into real currency through bitcoins! Radical: http://www.woolong.com/

I also watched The Guest, the new movie by the makers of the pretty darn good You're Next. The Guest was also pretty darn good, however I found it mildly disappointing that The Guest was an action movie that fucked with you using subversion, just as You're Next was a horror movie that fucked with you using subversion. It sort of took a bit of the wind out of the movie by me expecting something awful to happen. But that certainly wasn't a crutch for the movie, which stood up and mauled me like a bear with it's tension and awesome music. Give it a lick if you're into low budget action/thriller movies with electonica scores and fuck with you scripts.

Also, Barbarella's awesome. If you frequent this site, I can't imagine you'll dislike it. It's pretty much all about sex.

Soooooo.... This is gonna be a really weird one. On a TF2 article earlier this month I posted my favorite Source Filmaker movie:

One of the best parts of this video is the music, which made me really curious as to where it came from. Thankfully, the artist's name is in the credits, a Paul Dee Laek. So, naturally I googled this person and found their youtube and soundcloud channels. Pretty neat music right? Good strange! I really like it. Upon searching, I found out they were from Russia and something about... MTF? Wonder what that means...? Anyway, I kept snooping around, listening to music and dound a link to the artists tumblr page. And that's... Oh. Paul Dee Laek, has had a male to female sex change, and is now known as Sara Dee Laek, who posts pictures of herself naked whilst slittling her wrists on her tumblr. I... sorta think this is really cool. And kinda hot. Anyways...

Her music is really cool and right up my alley!

I've also been listing to a lot of OSTs, like Hotline Miami 2. Really, enough said. That soundtrack is awesome. Here's everyone's favorite track? 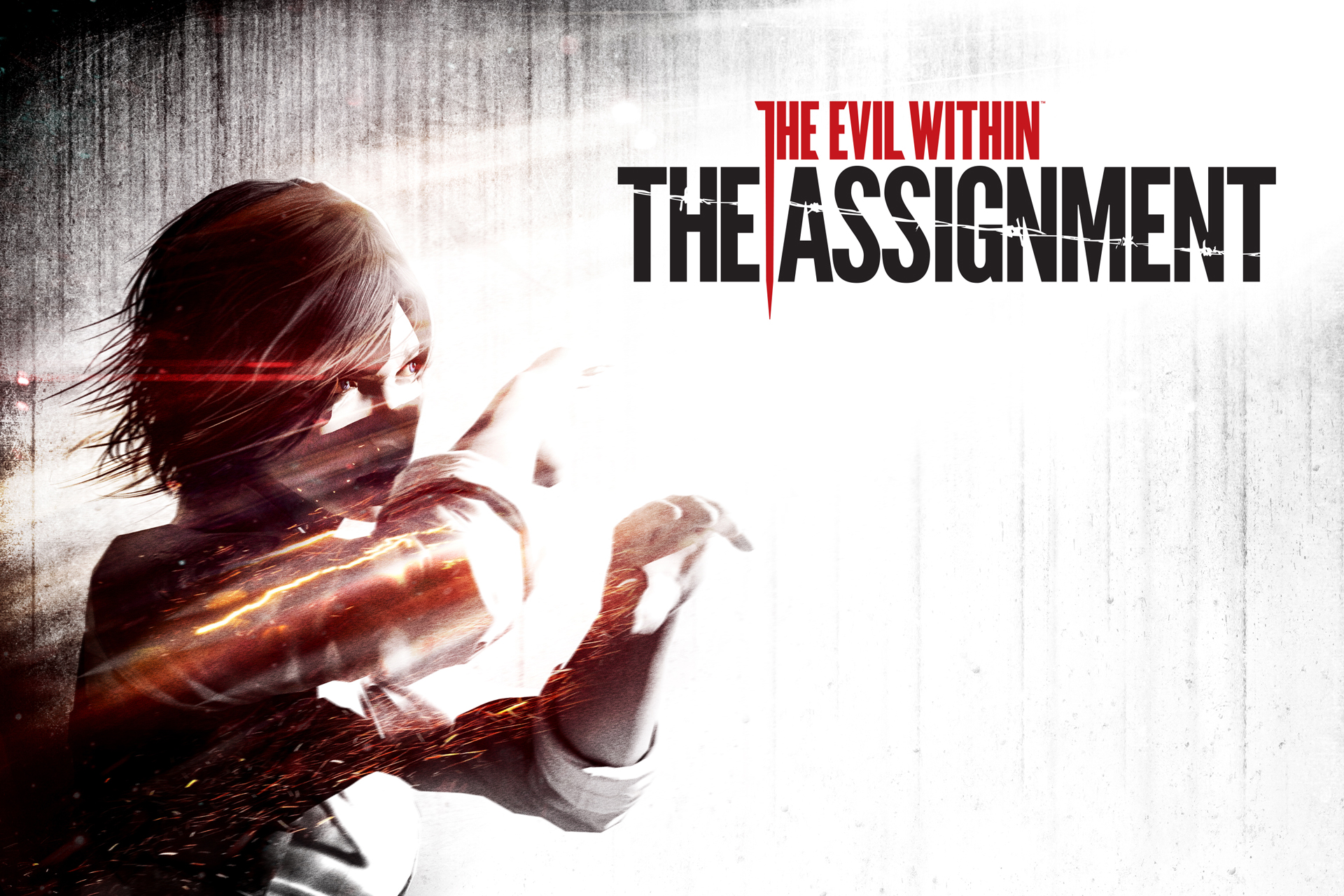 So what the fuck guys? Why is nobody talking about The Evil Within's really fucking good DLC? Huh? You got like brain tumors or something? Oh your face just looks like that. Alright.

My personal opinion on story based DLC is that it tends to go one of two ways:

1) Be a cheap rehash of content that was already present with a couple of new bells and whistles, ala Shadow of Mordor's recent campaign expansions

2)Be a more substantial, and sometimes risky approach with the old content serving as the base to build off of, ala Bioshock 2's Minerva's Den campaign

The Evil Within: The Assignement not only fits firmly in the number two category, but goes above and beyond to be something of its own. Why? How? Well, let's talk about it.

FIRST: NO GUNS, AND ALMOST NO COMBAT

The most surprising revelation of The Assignment is that the game has removed guns from the core gameplay. There is only one sequence in which the new protagonist, Julie Kidman, obtains a gun, and it is a scripted sequence that lasts under a minute. The rest of the 4 hour DLC is entirely focused around sneaking past/tricking enemies and solving old-school horror puzzles.

Kidman's ability to fight back substantially doesn't even come till almost halfway through the DLC, and when achieved is only through one time use before broken stealth kill items. This new stealth focused combat approach is helped out by...

Woah what? Yes, The Assignment has added the ability to take cover in the environment, and even yell out at enemies behind said cover to attract them towards Kidman. There are also some neat puzzles which allow Kidman to manipulate ringing phones to lure enemies into rooms to lock them inside.

In addition to the steath mechanics and cover, there's a badass flashlight you get that allows you to make certain objects materialize/dematerialize by shining it on them. This allows Kidman to make holes to scurry through and escape enemies, or create symbols on the wall to solve puzzles. If you're familiar, the flashlight use is very akin to the later levels and DLC of the first Alan Wake game, but with a single symbol rather than a multitude of words serving as the catalyst for creating objects.

I'm gonna stop there. I want to do a blog on this DLC, since I really like it. Before I drop out though, here's a couple more cool things about it:

The save station is a cute little cat that Kidman occasionally finds crawling around:

The art direction is awesome and unique when compared to the main game, using lots of contrasting greens and reds. They even use this red/green color palette in gameplay. This room starts green when you enter, but then turns red when your stalker shows up. As time passes, the room gradually becomes more green. If you survive until it's all green, you can escape. Writing that it sounds a little dumb and simple, but I still think it's a neat, clean way to incorporate the omnipresent art direction into the design:

The new enemies are freaky and very Silent Hill: 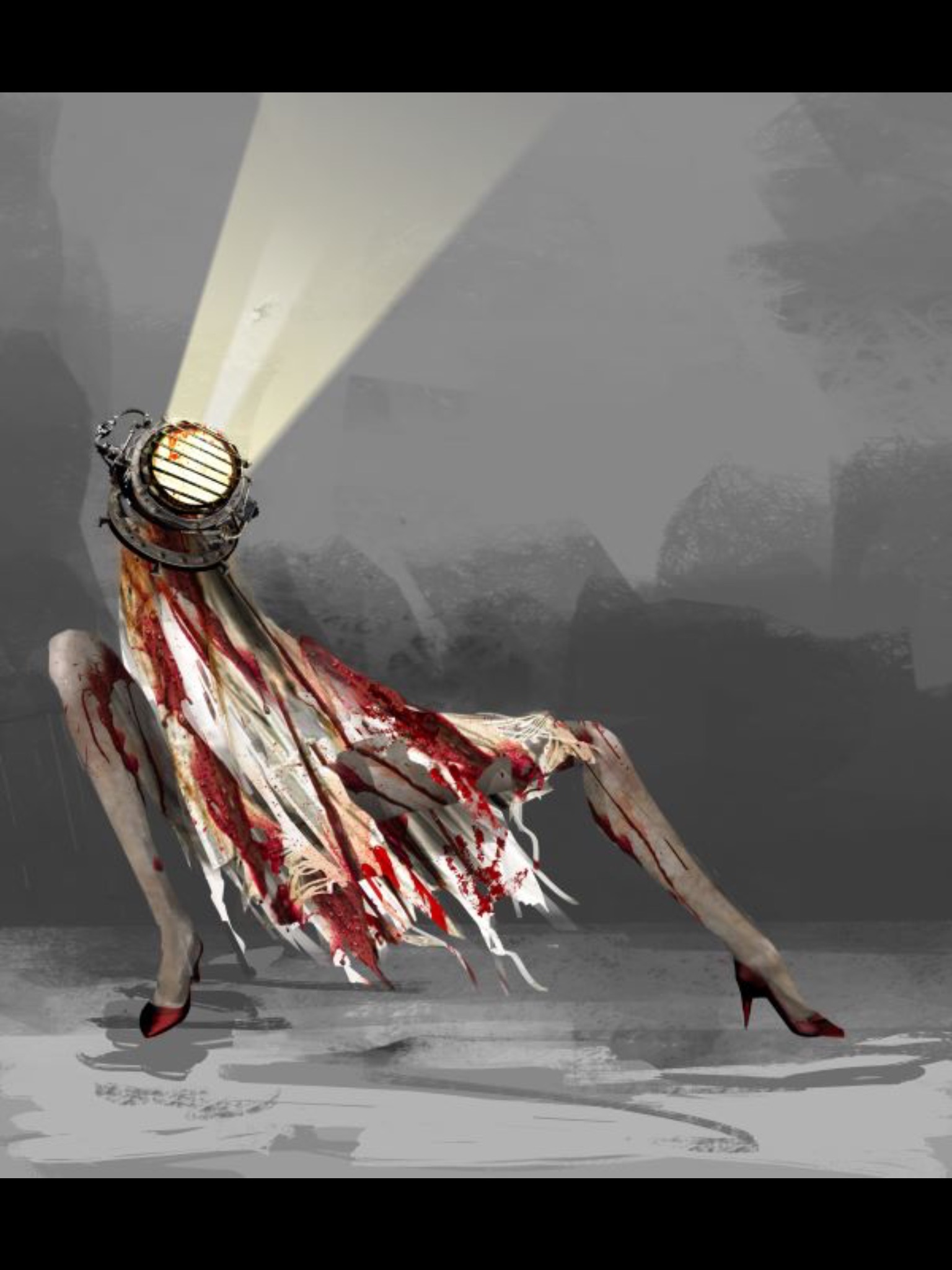 All of Kidman's coworkers have this weird censored face that hides their identity. They're not enemies, just people you walk by at the beginning of the game. It's a cool, creepy way to show how underground the company, Mobius, is:

And uh, like that's been my past week. It's spring break, but I'm sick on the couch, so I haven't really been able to do a whole lot. Having a Star Wars marathon with some friends on Saturday though. Getting pretty fucking hyped about the saturation of that series we're about to feel, especially with the Battlefront III reveal less than a month away.

I've also been doing 3D modeling. Here's a turtle I made while lounging about. Going to texture it soon, since I just finished UV mapping it (UV mapping is just literally the worst). LITERALLY. AND FOVERVER. /internet

Here she is (actually I modeled it after male box turtle anatomy, so it is in fact a male) The top is the low polygon version, the middle is the UV set and the bottom is the high polygon version. Check out the image link at the bottom of the blog if it's not big enough. 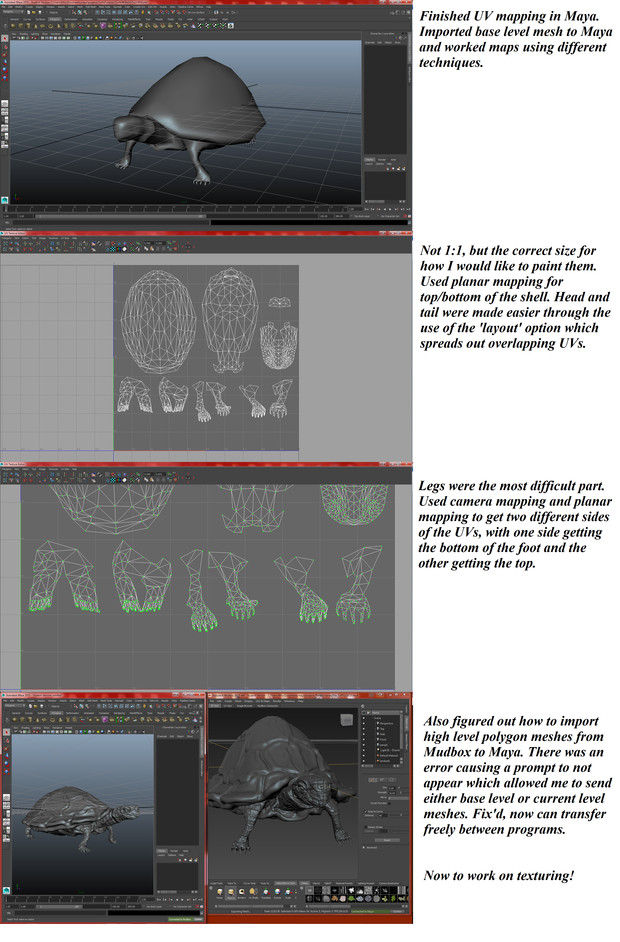 Anyways, thoughts on what I posted opinions and turtle would be appreciated. What are you guys doing?