Hey Destructoid.  In the 9 years...wow, 9 years, really?  Nice.  In the 9 years that I have known you, one of my favorite community blog things was always the dude who would jam out a drunen blog.  I want to say it was BahamutZero?  I don’t know.  I remember the icon.  There were a few other people who would do it, but that guy was legendary at it.  Today, I hope to join the ranks, except not really.  Tonight, I just wanted to blog to get things off my chest to an anonymous crowd, and maybe get the feeling that some people are on my side.  At the very least, no one commenting or liking the blog won’t hurt my feelings.  And if you don’t like the blog, hey, you are on my side anyway - I really don’t like when people do this kind of stuff myself, and I don't really have a good reason for that.  I probably just try to make me happy, and those blogs make me sad.  Lets go with that.

So I guess the elephant in my head is anxiety.  Anxiety really blows.  For twenty six out of the twenty seven years I have lived my life, I didn’t know what crippling anxiety really was.  I always though a panic attack was where your mind rushes around, trying to figure out everything to and prioritize it, and that some people just couldn’t deal with it.  Then last year I started having panic attacks and realized how much they really suck, and how powerless you are against them.  I want you to think about what the top five symptoms are for a heart attack, off the top of your head.  Chest pains, arm numb, shortness of breath….you get all of those with a panic attack.  It feels straight up like you are going to die.  And this happens every single night until you go to the hospital or your doctor and gets tests done and they say you are fine.  Except you can’t trust them, because it feels like you are going to die of a fucking heart attack.  Eventually I got used to the concept that death wasn’t imminent, but the symptoms still blow, and were enough to take me out of work.  So then I started to fear the panic attacks themselves, which triggered more panic attacks.  Until I finally got drugs to kick in, it was a constant cycle of panic attack after panic attack.

Why?  There was a lot of personal stuff in my life that I guess I just couldn’t deal with.  My grandfather was diagnosed with cancer (and has since been treated and recovered!), I have had some ‘family issues’ that I don’t wish to disclose online, but safe to say that it has made it difficult to communicate with my brother, who used to be one of my best friends.  Finally, my best friend from high school was in an emotionally and physically abusive relationship (which she is now out of), and would tell me details fairly regularly.  Combine that the regular burdens of every day life, and it was just too much.

I guess I feel like there is more of a burden with everyday life than normal on me.  I’m not sure though.  For my go to example, I want to use DotA.  Its a 5 on 5 game, and I feel like I could let down 9 people if I play poorly.  Before every game starts, after 200 hours of playing, I get knots in my stomach.  I actually have to cancel the 2 minute match finding timer thing so I can talk myself down and say that I will be fine for an hour, even if my team yells at me.  Every time I want to play.  This applies to any game with multiple people.  Magic the gathering?  I think I’m alright, but I still get nervous while playing people that I perceive to be better than I am.  When I played Call of Duty I would only play 8v8 or higher, so I could hide my stats, or say I had horrible spawns.

This applies to my at home life as well.  I guess I really don’t have a lot of self worth.  Stupid example would be when I brought in desserts to work one day.  They were little chocolate cups that I saw on a Jacques Pepin cooking video.  Super easy to make, so I made a few and brought them into work.  Everyone at them, and they all said how much they liked them - its chocolate, how could they not?.  But I still don’t know if they were good or if they were just being polite.  I never know.  I assume that people don’t want to offend most of the time, and wouldn’t tell me if they were bad.  Or, more topically, in the case of blogs, they wouldn’t tell me that a blog was dumb, written poorly, etc.  Some of my more successful blogs (of which there are few lately...I haven’t been writing a lot) really meant a lot to me.  Something about people going out of their way to comment and fap kind of validates the people pleaser part of me.  I was ecstatic when I got on the front page.  Yet, I can’t even mention how many blogs I have started to write only to scrap halfway through because I didn’t think they would live up to my standards.

So I want to talk about my anxiety medicine, because I can, and you have read this far.  Hah.  You are trapped.  The medicine I am on has a few side effects.  The first is that I am tired all of the time, and have a much harder time focusing that I usually do.  It has been hurting my work, and making my home life suck.  Have you ever looked at a library of 10 fresh games, and decided to just sit around and watch twitch instead?  Yeah.  I would love to clear out my backlog, but I just can’t muster up the effort to play games that I love.  Second side effect is that I can’t drink as much as I used to, and if I do drink, I feel like shit the next morning.  Spoilers: by the time you read this, I will feel like shit.  Resting heart rate of like 140 kind of blah, because I hate medicine that much.  The upside, I guess, is that I can get drunk super easily now!  And you know whats better than a panic attack?  A drunken panic attack!  Yay!  So I kind of lost one of my favorite escapes from reality.  And now I am in this weird half world where I don’t know why I drink:  I know it will make me feel like crap.  I know it will not lead to new friends (I mostly go out and check my phone.  I used to say I went out to drink and met girls to get over my debilitating loneliness, but I realized that was a lie 1 year into 5 years of drinking while single.  Yay!)  So I get nothing out of it but longing for what it used to be.  And I know it is bad for me, but I can’t bring myself to give it up, because it is something to do on Saturday nights.  I guess that means I’m addicted.  I hit 5 of the 6 signs of alcoholism, which is really ironic considering I haven’t been drunk enough to really lose my mind in well over a year. 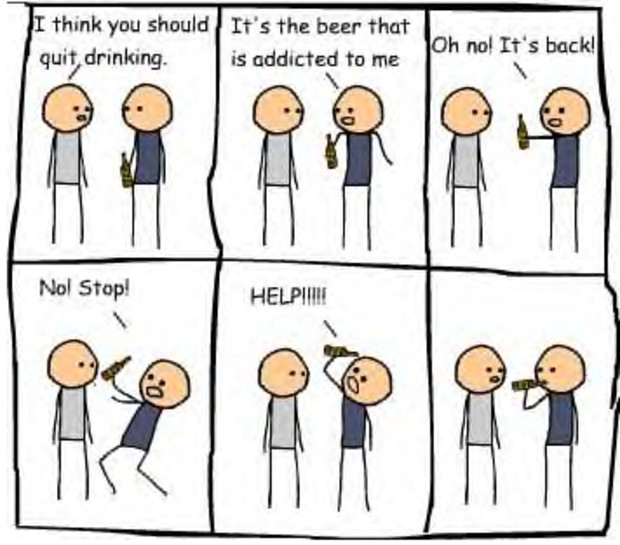 I don’t know the point of this.  There was a really good chance I wouldn’t post it.  I guess the upside is, part of me feels like I have some kind of home here, even if part of me feels like a no one.  I have been on the site since 2006/2007 and have a few people who I consider to be ‘cool people’ on the site, but I don’t have very many people I would consider friends from here.  No one I would want to ask a favor, or work through a tough problem in my life.  I suppose that is true of my real life friends as well.  Anyway, having this group to write blogs to has been helpful when I have been down before.   I wish I could write more, but between a lack of ideas, a lack of esteem, and a surplus of anxiety, it has been rough.  Thanks to all who have been supportive of my efforts I guess.  You know who you are.

Blog end!  I feel like there was more I wanted to say, but I guess this will do for now.