Why I'm Not a Fan of Grand Theft Auto Online Heists...

Caving in to popular demand, Rockstar Games finally released their newest (free!) DLC to the community of Grand Theft Auto V this tuesday- the Heists mode. Although, to be honest, I'm not sure if I enjoy it or not...

Yes that's right - on the 10th March 2015 Rockstar Games, creators of the bestselling Grand Theft Auto franchise let the Heists update on the public after promising it over a year ago...

The gamemode focuses on a team (more specifically 4) of human players that undertake a series of 5 heists. The formula was obviously used well in the Story portion of the same game (albeit slightly limited) and as such, the entire online community had been biting their fingernails, waiting impatiently for something they knew nothing about, other than it included some of the characters from the base game, along with an opportunity to gain some easy cash.

It should be something that I enjoyed - hugely - yet, for some reason, it left a bad taste in my mouth. Let's run through why... 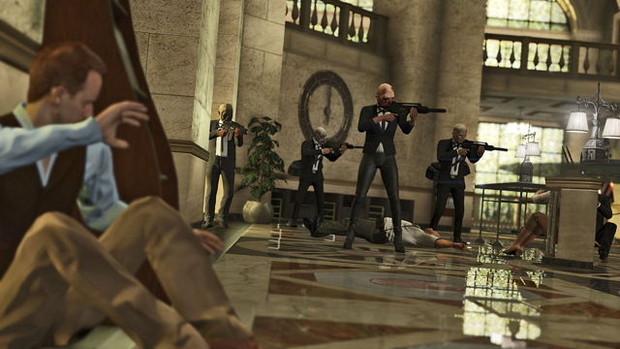 So the first heists features a fairly simple, regular Fleeca bank robbery. There are two setup missions, where you collect items etc. that you'd need for the actual purloinery. This one in particular involves a sort of "casing" doo-da, as well as the theft of an armoured car to be used in the getaway (I should note at this point that this heist is only two players). You then procede to actually rob the place using the help of the incredible Lester along with his slightly gothic assisstant Paige. After drilling through the vault and collecting your reward, you drive off into the sunset, where a giant Cargobob with a magnet (no, this wasn't mentioned in the plan) will pick you up and lead you to escape.

"The crew of two players will be tasked by Lester Crest to steal bonds from safety deposit box 167 at the Fleeca on the Great Ocean Highway in Chumash" - GTA Wiki's description of the heist.

So, the first foray into the heists of Grand Theft Auto Online isn't too bad, right?

Let's start with a problem that p*ssed me off hugely. The R* servers over the past couple of days have been competent at best, and at least once every hour, I'd be kicked because I "couldn't connect to the Rockstar servers". Thankfully, they released a patch earlier today and it looks like the issues have been tidied up, but it was infuriating to be at the very end of a mission, only to lose connection.

The next one might possibly be even worse. Because of the density of players on nearly every server possible, there was an invite to a heist nearly every few seconds and this meant that hosting your own leaves you with very few players. To improve on this, Rockstar should probably have raised the level-cap needed to begin one maybe?

And last but not least - THE SHEER VOLUME OF NEWBIES. So apparently, a whole host of gaming goons decided that Monday 10th would be an opportune moment to pick up GTA V, giving the rest of us a bunch of fools who've never fired an in-game gun before. I appreciate the fact that R* are using this as a nice marketing ploy, but seriously, playing the 2nd mission (which really is quite hard) with people that can't fly a plane makes me want to shoot myself.

Your pal and loving writer,