After Volgar the Viking, Adult Swim Games proved they are out to publish the interesting and the inspired.  Oblitus for all its pratfalls definitely checks both those boxes.  Now if only the Harbinger’s journey wasn’t such a harsh one. 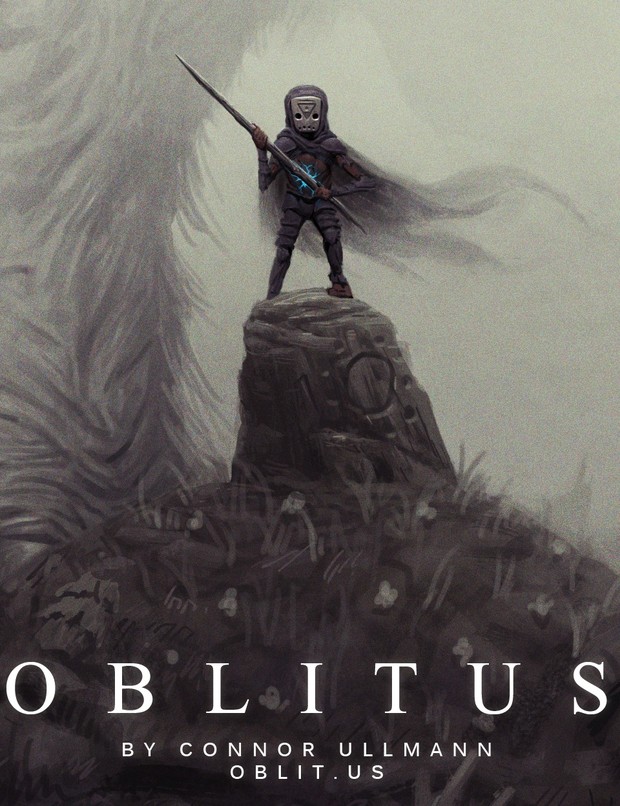 Oblitus manages to portray a fairly simple game with one objective.  Find the only NPC that isn’t trying to kill you, and murder the goliath that has pissed him off most recently.  There isn’t much more meat to it than that, but the bones of the game are solid enough to justify a purchase, especially on a sale.  Despite some of the more restrictive design choices, the world manages to convince you to give it just one more go.

After a short introduction to the controls you’re thrown right into the fold.  Roguelikes be damned for promoting the recent uptick in painstaking difficulty, nothing is held back.  There is an intimacy to the timing of when to attack, or block.  You can use your spear to jab, removing your defences temporarily or choose to throw it, allowing you to still hold your shield up, but leaving you without your weapon for a few clutch seconds.   Expect to die a few times learning the varied attack patterns of your enemies,  which normally wouldn't be such a hassle if you didn’t start you all over right from the beginning.

Baring your artifacts, everything resets with each death ala Hardcore Diablo. This can lead to some beyond frustrating backtracking as even the world changes with each spawn.  The gear upgrades are largely random both in location and ability granted.  Boss fights stay in generally the same place, and you’re all the wiser for having done them before, but you’ve still done them before.  With no in game map, remembering where the various key locations are, is of the utmost importance.  Sprinting around to get a handful of the easily acquired upgrades each life cycle is essential to progression.  I don’t want to even try to defeat some of the larger enemies without the lightning spear, which just makes the ranged attack a much faster projectile.  Destroying any of the three simple bosses rewards you with a damage focused upgrade, making the Lizard men that plague you easier to defeat. 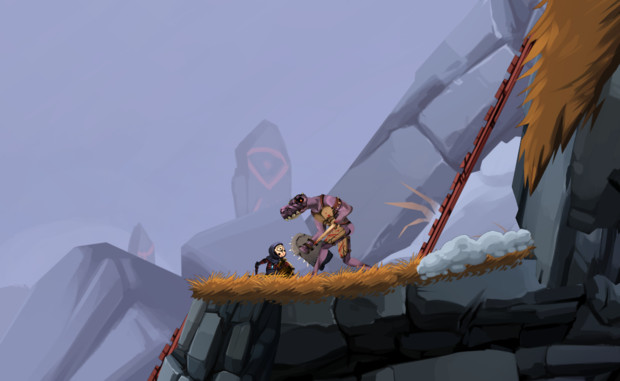 You’re not the first Harbinger, Mudd warns you, and you won’t be the last.  Finding the slain corpses of your predecessors restores your health, and each kill giving you a meager few points.  Your health bar is a never quite full glowing green ball in the corner, reminding you that death is only a failed block away.  I’ve never been so happy to see a dead ally in my life, then after a long hike through bear infested caves.

Struggling to stay alive is still a beautiful experience, the hand drawn style is fantastic to look at, like a flash cartoon homage to pastel impressionism.  I was mobbed by frogmen for enjoying the beauty of their river once.  Even the simplest enemy of the game can remind you to keep your eyes off the scenery or be forced to restart.

While dealing with the various beasties you’ll find yourself in one of four biome inspired worlds with their own distinct flavors.  The Forge in the Sky, The Village Jungle, and the Mountain Caves serve as the bulk of the adventure.  At the start of a fresh life, Mudd’s whisper in your skull tells you to go to one of the three lands and meet him face to face. Each area gets its own eerie synth music that does well at setting the mysterious and tribal tone. Traversing to a different zone is marked by a loading screen of a stylized mask similar to the one the protagonist wears.  Don’t attack the barrier where you first awake or you’ll find yourself in the final level, The Underworld, being drained of your health with no capacity to return to clean air.  The enemy types vary in each location, the giant Eagles in particular were a fun surprise, shooting them out of the sky before they dive bomb you continues to be a highlight.

Each life educates you on something new in the game, whether it be how to properly roll, where upgrades might be, or just teaching you not to piss off one of the various minibosses.  The first encounters with the Bear or Golem leave you truly terrified, unsure how to defeat such monsters with nothing but a pointy stick.  Oblitus isn’t a game about the character leveling up, rather a game about the player learning all the tricks of the world.  Eventually that first boss that killed you a few times becomes nothing more than a quick way to get a buff, the seemingly endless caves becomes nothing more than a shortcut.  There are hours of gameplay here, wrapped into a package that taunts you with an achievement “beat the game in under 25 minutes”.

So for those who push through Dark Souls wondering where the difficulty is, or if you ever wished Megaman felt more like Zeno Clash, Oblitus is begging for your expertise.  If you fall in both categories, be sure to add a point to the review score.

This review is based on a retail build of the game provided by the publisher.