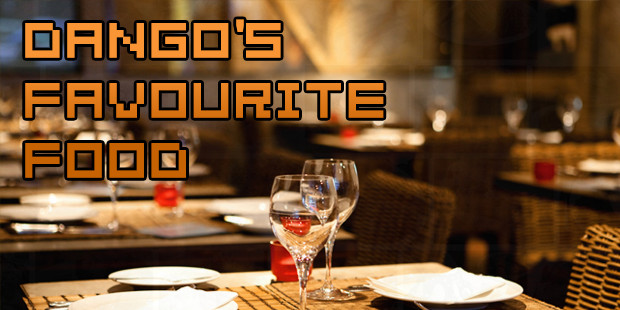 Hello Destructoid, and welcome to a very special blog!

Writing about interactive entertainment is a lot of fun, and it's something that I intend to do more in the future. However, sometimes you need to take liberties with what you're given if you really want to express yourself in a way that truly matters, and nothings in this world matters more than food. Because, you know, we need that in order to live. Yet, while the consumption of food used to be nothing but an act of survival, we, as a species, have come as far as to turn it into an event, an activity, and even an art form!

I've always had a lot of appreciation for good food, but recently, I feel like it's been stronger than ever. Ironically, I've often been called a picky eater, and yeah, I suppose it's true, but when I do like a dish, I really like it. It actually fits in rather well with my taste in other things, such as video games, or any other media.

What I'm writing here is essentially a top seven of my favourite dishes ever, although it's only really the last one that fits into any sort of 'order' (and you might already know what that one is). The number doesn't mean anything, it just happens to be the number of favourite dishes I could come up with. No reason to make a blog like this all that long.

This is probably one of the first things I learned how to make, and the first thing that made me wanna learn how to cook. It took a while for me to actually get there, but this was a brilliant beginning. I've always been down for some spaghetti, and I always manage to empty my plate, no matter how big it is. Like, seriously, I've managed to eat some pretty grotesquely huge portions of spaghetti in the past, which you'd think would be impossible considering what a small dude I am. Where does it all go?

Of course, the main attraction here is the sauce. I like mine a little spicy, and I usually add a bit of extra oregano to it. Sometimes I even add some fresh tomatoes myself. It's also really important to me that the meat:sauce ratio is maintained, so that it won't get too messy and/or flavourless. Balance is important!

Parmesan cheese is also a must for me, though I've come to understand that this is something many people would rather avoid, which I've never understood. Granted, I usually add plenty of it (don't judge me, it goes bad quickly), which would understandably turn some folks off, but even a little bit makes such a huge, positive difference. But, okay, I have my own toppings and spices that I dislike, which would probably make others think I'm weird too, so it's okay. We all have our little things that make us want to chicken out.

Sorry, I mean fuck nuggets! Don't get me wrong, I like chicken nuggets, but if they think they will ever rule the Fried Chicken Kingdom, they better prepared to get deported ASAP! Tenders tend the throne here, bitch!

Holy cock, what a surreal scenario! All that was just a way for me to say that chicken tenders are awesome and delicious, and my second (SPOILERS) favourite way of being served chicken in any fashion. This is despite the fact that I like chicken in pretty much every way.

Fried chicken tenders are basically the perfect mix of good meat and oily crunchyness, two things that are far too rarely seen together. In my experience, most fried food is junk, but I've never had tenders that disappointed. Then again, I've never had them that often, so there are probably plenty of places that mess them up, despite how easy it is to fry chicken. Seriously, I've tried it myself a couple of times, and it really doesn't take much to at least make it decent.

Then again, there's always been something fishy about the way some of the, uh... "less admirable" eating establishments serve their fried chicken. Pretty sure some of it is even worse for you than you might think.

My grandfather was a fisherman, and what an impact he left on me. He's been dead for almost 13 years now, but I'll never forget the stories he would tell and the pictures he would show me of all the fish he and his crew would manage to catch. He was a great guy, and probably part of the reason why I love fish fillets as much as I do.

Cook it on a pan and serve it to me with a slice of lemon, as well as some fries or bread to the side, and I'll be a happy man. Unlike everything else on here, however, I personally prefer having this for lunch rather than dinner. It's just 'light' enough, you know? It never makes me too full, but it gets the job done, and that's what I consider the best kind of lunch.

I also like different sorts of fish, but cod has always been my go-to fish. That's normal, right? Everyone has a go-to fish, right? Make sure to write about your go-to fish in the comments below, I wanna know what it is. You all have one, don't try to hide it, I'm not crazy! You're crazy! Tell me everything about your go-to fish! Don't wrap the truth in the blanket of comfort, it's time for it to come to the surface! Like a fucking fish!

This is where things start to get spicy. There isn't a lot food in this world more satisfying to eat than a succesfully wrapped tortilla full of hot, cheesy, meaty, tounge-roasting goodness. It's one of life's most simple pleasures.

FUN FACT: I couldn't find any images of a tortilla wrap that looked even remotely like the ones I make. Way too many veggies, not enough cheese, meat and hot chili peppers, AKA the three main ingredients in a Dango Wrap™. I just came up with that name on the fly, what do you think?

"Do you wish vengeance upon your own tongue, and do you happen to utterly despise your asshole!? Well, we got just the treat for you! Introducing the Dango Wrap™, a cheesy, spicy mess that will burn you from both sides! Go grab one today!"

Sometimes I do add a bit of cucumber though, so my recipe is a bit mixed. Variety is the spice of life, even when actual spice is hugely involved.

Here's a little something that will wok your socks off!

This is almost as much an experience as it is a tasty meal. I've only had this at one place (just down the street from where I live, which opened a couple of years ago), but I've eaten it a bunch of times, and it's always a total joy!

See, the way it works is that you get to pick from a large variety of meats, vegetables, noodles and other stuff, then take your plate to le chef, who then gets to work his magic in front of you (while you get to pick the sauce that you want). Remember to seperate the meat from everything else, though, as it needs to be cooked first, before the other stuff is added. Don't make le chef sad. Be responsible.

Oh, but even after the show is over, you get a seriously tasty meal. An unstoppable hurricane of flavour is the only proper way I can describe it, especially if you really vary your ingredients. They got squid rings at my place, and they come fully recommended. Squid is so weirdly delicious. It's chewy, but entirely worth it, and adding a few squid rings really make a difference with this dish, being a perfect complement to the more ordinary beef/pork/chicken combo.

A plate of mixed goodness like this is always guaranteed to leave me satisfied with everything in life.

Boyoboyoboy! It was only a matter of time before this timeless classic made its debut.

How do I even begin? You've had this, you know what the big deal is. We all do! It's a steak, it's not rocket science! It's not some kind of uniquely aquired taste. It's the world's most accessible piece of meat.

Of course, there is only one proper way to cook it, which is on a grill! Sure, other ways may lead to acceptable results, but only in case of weather related emergency situations (if the sun isn't shining). If you can grill it, that's how you gotta do it! Always look out for them while doing so, too. You don't leave a steak on the grill, you watch over it like a concerned mother, making sure your little kid doesn't get sunburnt. Overcooking a steak is nothing less than a tragedy, and no one should ever do that! I know that some people say they prefer their steaks well done, but some people also claim that the pyramids were built by aliens, so I think the conclusion we can make here is that some people can be a bit silly at times, and that we probably shouldn't listen to them.

There are several different types of cuts when it comes to steaks, and I would probably get a lot more street cred with the cooks if I picked and stuck with one, but I honestly like the variety. T-bones, for example, are pretty fantastic, but they are also a lot more trouble to prepare and cook, and I'm glad it's not all we got.

Speaking of grilling and Summer and all that is good in this world...

Yes, it's time for the thing that you could already see in that little 'things I like' collage I've made.

Whoever came up with this is the biggest genius the world has ever seen! Holy fuckleberry, I love me some ribs! Mmmmh mmmh mhh! Everything from the consistency, to the flavour, to the slightly rough nature of the actual eating process, is absolutely perfect to me. Gotta get your fingers dirty, people! That's how nature made you!

I could always eat ribs. It doesn't matter how sick or tired I am, there's nothing in this world that can stop me from accepting such a heavenly meal. I must have this every Summer, otherwise I would stop functioning. As with the previous entry, this belongs entirely on a grill. There just has to be a certain amount of smoke in there in order for it to be just perfect! Furthermore, the sauce should be applied in a way that makes it be absorbed by the meat. Don't drown it in sauce, that's just overkill. Some restaurants do that, and it sucks! Make it a thin but substantial layer that adds flavour to the meat, without ever overdoing it. I've even made my own sauce a couple of times, often to surprisingly good results. The beautiful thing about barbecue sauce is that there are so many ways to make it, and you can find tons of recipes online. One day, I'm planning on coming up with my own unique one. I'll probably make it slightly spicy.

But please, don't give me any of that "McRib" crap. Everyone who's ever called that thing a living legend should be ashamed of themselves. McDonald's is not quality, it's junk, and you should get your rib fix somewhere else. Ribs being treated as some sort of junk food is a gigantic insult to everything I stand for, and it's a trend that I very much wish to see the end of.