So once again I’m a bit late… by a bit I mean terribly late, sorry about that! Real life gets in the way sometimes and with my wedding coming up we had a couple of things come up, a birthday party, my best man came into town for three days to hang out as well and that derailed my train as well (not his fault of course). Speaking of my best man, I’m still looking for a podcast cohost if you’re interested! My best man from real life Ra, has shown interest so I think that’s one and Cosmontropolis as well but I haven’t seen him for a few days. But if you are interested hit up the comments! Be you new, veteran or in-between I’m interested, as I want this podcast to appeal to everyone not just comic book diehards. Also! What do you guys think of the name Piled High Comics: A Comic and Geek Culture Podcast? 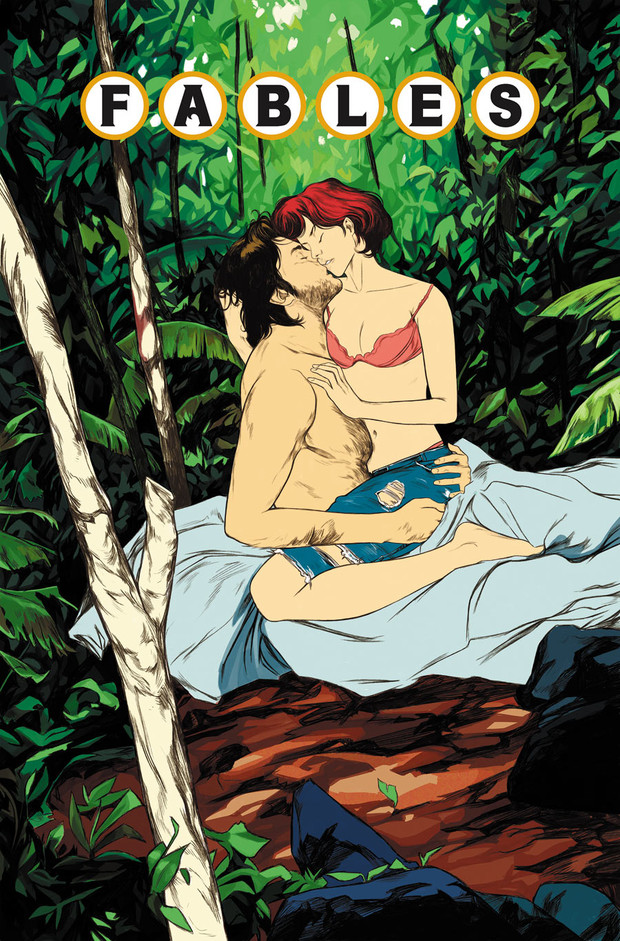 So… uh… well Fables is ending! I wish I’d gotten into this series sooner due to the fact that I only just started last issue, and it ends next issue. And I have little to no clue what’s happening still! But I am buying the collections as they come out, I probably won’t cover those just due to the sheer amount of content in each one but… I could on the podcast. Anyways in this issue we see a few more details that Snow White & Briar Rose are part of the cursed line that while one of them lives neither of them can truly be at peace. Other things happen that I don’t understand since as I said only have two of these that I know but apparently Bigby Wolf isn’t dead (big surprise) but is Rose’s agent as of this moment, which she has complete trust in will keep him on her side. We’ll see because I’m predicting that either it won’t work or after Bigby kills Snow White will go mad with rage and get Briar Rose as well. But I could be completely wrong! 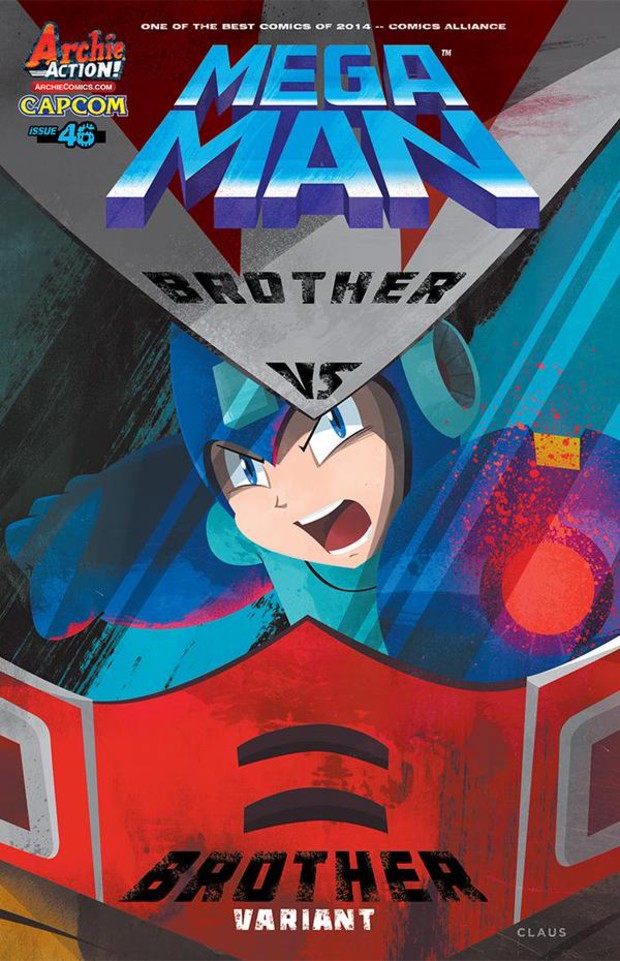 In this issue Mega Man faces off against Proto Man (Break Man) and beats him with a well-aimed shot, he also tries to convince Blues (man he has a lot of names doesn’t he?) that Dr.Light does love him and wasn’t trying to replace him when he made Mega Man. Mega Man also decides to not kill him because well… that’s what Mega Man does, he shows sympathy and like Dr.Light tries to see the good in all people. It’s why he saved all the Mega Man 3 Robot Master chips so they could be rebuilt. Proto Man also blows a hole in the ground because there’s a sewer system that’s easier than the front door, and we just kind of glance over the first Wily Fortress boss and continue directly onto a cliffhanger with Yellow Devil Mk.2 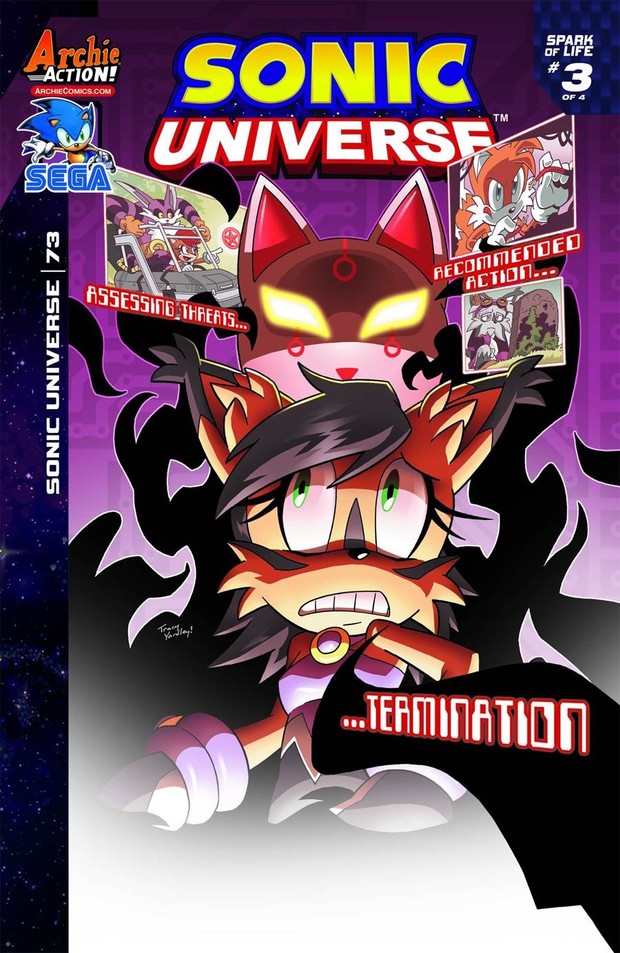 We find out that Dr.Ellidy was partially holding on to a secret but it wasn’t to terribly bad, we see a person that looks strikingly similar to Nicole due to the fact that it’s Dr.Ellidy’s daughter Nikki who passed away and Nicole was supposed to save her. We also find out the reason they were acting so negatively was Gaia Energy throwing off their mojo’s. Nicole finds the intruder known as Phage and surprise surprise it’s from Robotnik. Sally digitizes in to try and help Nicole against Phage while she sends Tails and Big off to get the Chaos Emerald in the lake. While all of Robotnik’s creations and Dark Gaia monsters are after them. 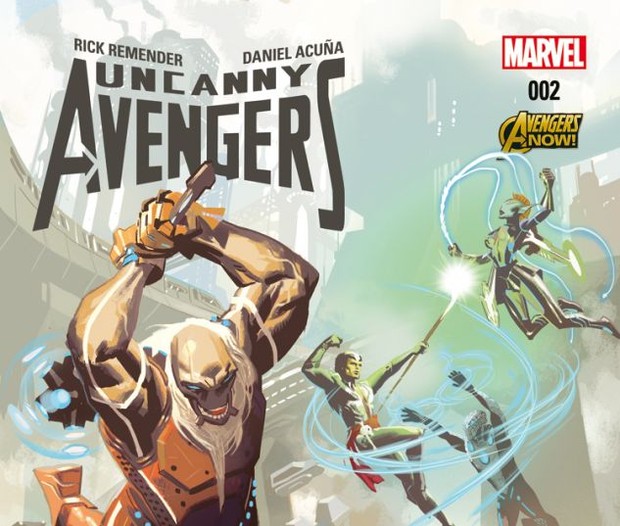 In this issue everyone gets beat the hell up, the High Evolutionary as he’s called destroys the entire race he’s created since they’re imperfect, Sabertooth of all people tell him the blood never washes off. Well he is reformed. He also gets his veins removed from him quite painfully, and he’s still alive somehow. Rogue is still locked up and Scarlet Witch and Quick Silver just woke up from being knocked out and they supposedly have a sister called Luminose. So things are just getting started! Dr.VooDoo tries to confront the dead and Captain America makes a brief appearance as a tree. 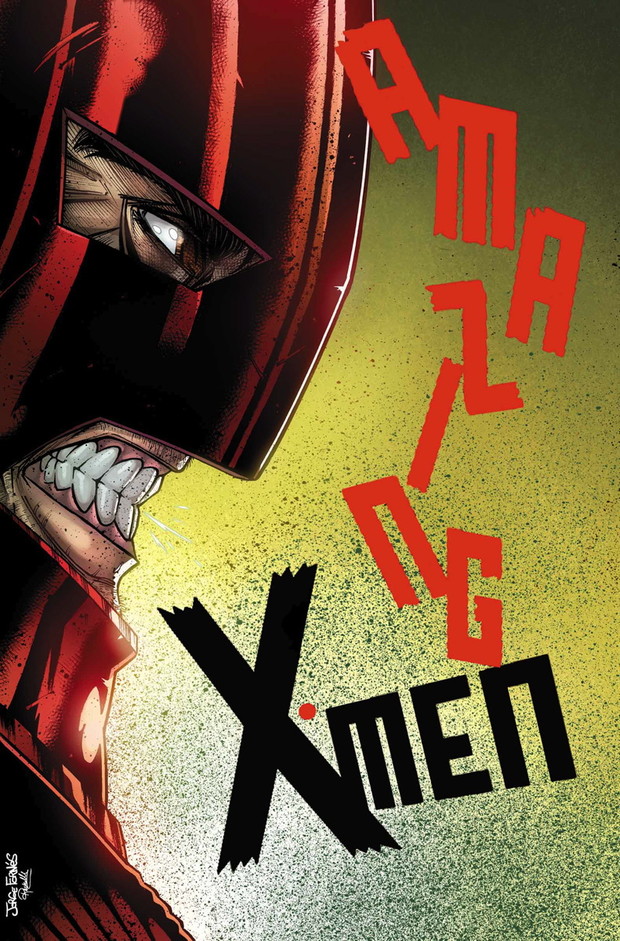 In this issue we have a big showdown with the X-Men trying to fight all the bad guys that want the Jewel of Cytorrak but shouldn’t get it because the X-Men want to destroy it before it can be used for evil. Has it ever not been used to evil? Also Cain Marko is pissed as fuuuuudge when he makes his appearance since one of the X-Men killed Professor X. Cain Marko also wants to destroy the gem but nope. Not that easy Ahmet Abdol gets his hands on it, and I have no idea who that is! But I’m sure we’ll find out next issue. 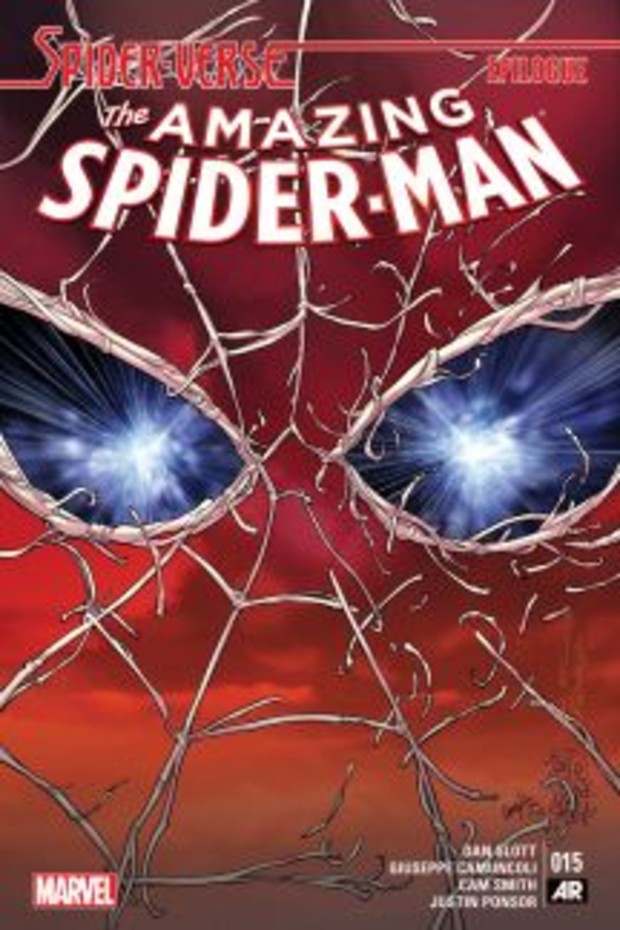 So… this issue got weird… we found out the Master Weaver is a future version of Karn so that’s a thing, we also get Doc Ock Spider-Man being an asshole and cutting all the threads that held them all together only because he doesn’t want to be eliminated from time. Sounds like something Doc Ock would do, Peter Parker also gets some pretty funny lines in such as when Ock calls him a coward for outnumbering him. Even though he was the one that founded the Sinister Six, we also get Peter to tell Doc that he is not the Superior Spider-Man but Peter is. It’s amusing because of how cocky Doc Ock is. We also get to see that the Inheritors will be eating the mutated spiders so as to stay alive, UK Spider-Man’s world is gone. Destroyed. Don’t know how as of this moment. Also Karn appears to not be dead! So that’s good at least. 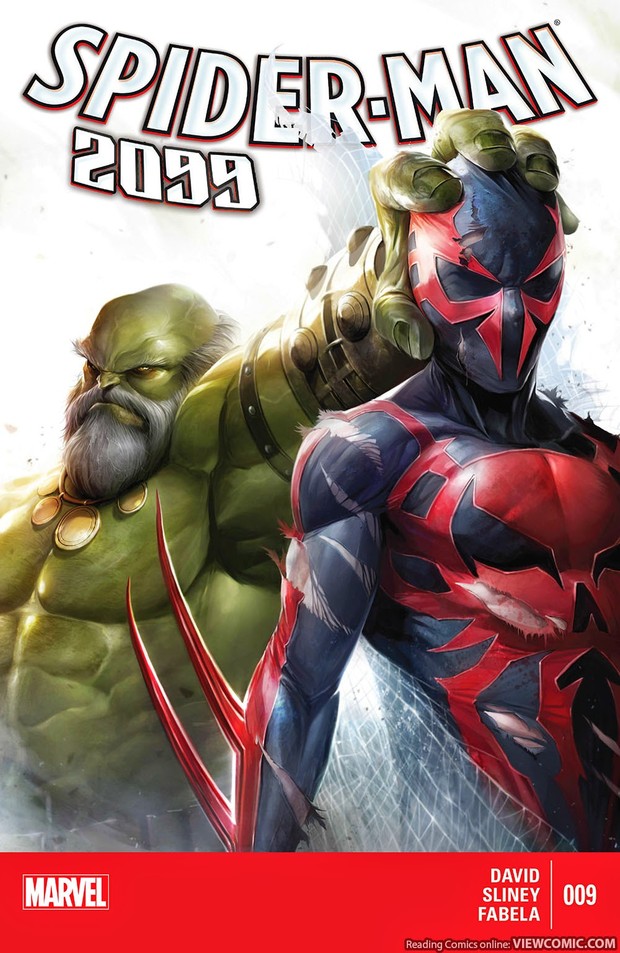 For this issue we get questions. Lots and lots of questions. How did Miguel O’Hara not arrive in the right time line? Why is Maestro (Future Hulk) king of everything? Why is everything in shambles? What did Alchemax do to create this future? Oh and Maestro’s a messed up sunuvabitch, killing people and rearranging them as words to spell out his name. But yeah aside from us establishing that Miguel O’Hara is not where he belongs not that much happens, lots of Miguel trying to figure things out but hasn’t quite yet. 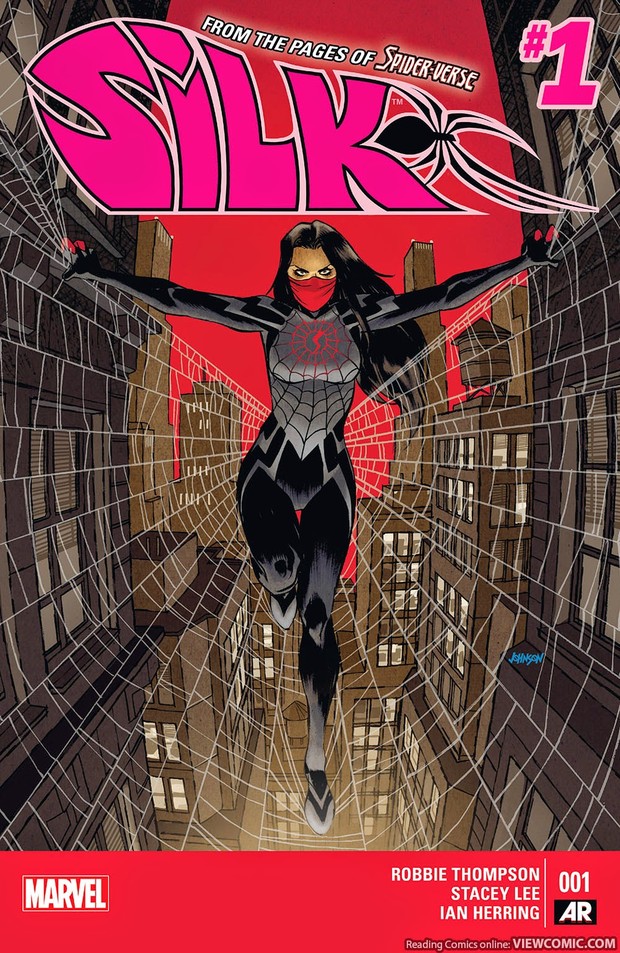 Silk faces off against her first foe who is hired by Black Cat, Dragonclaw is his name although he keeps getting called a Pokemon, she has some job problems and Silk is wanting to find her family. They also have a scene that I’m… uncomfortable with… I won’t go into it but I am glad it shouldn’t happen again since Silk moved out of where she was living. Someone’s tracking her but we don’t know whom as of yet and Dragonclaw gets beaten pretty handily early on. That doesn’t mean he’s out quite yet since some foreshadowing is involved. It looks like it should be pretty intriguing of a series so here’s hoping! 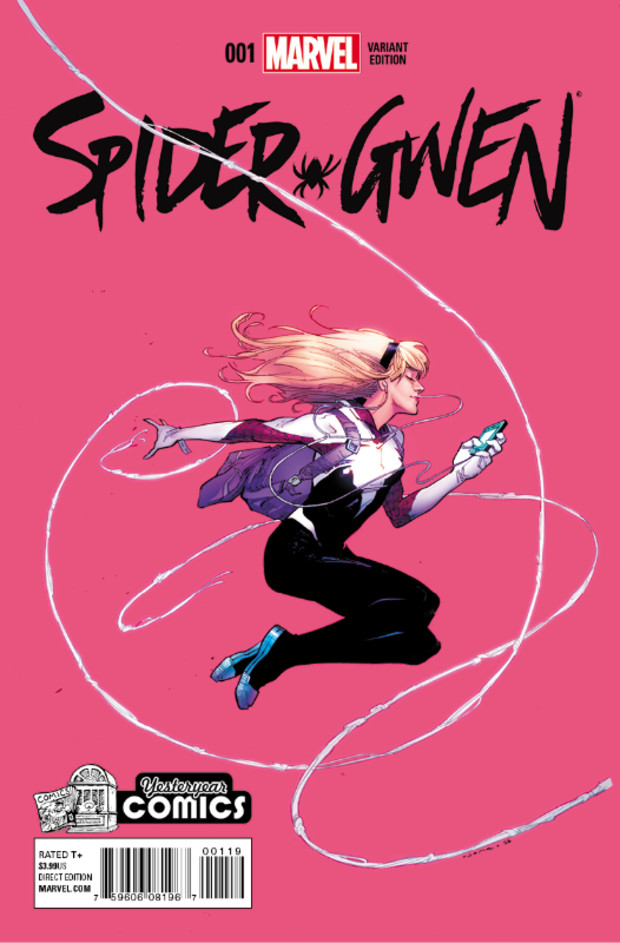 The unfortunate thing with new issues of things is that they tend to set up a lot of things but don’t go very far with them. But that’s alright as long as they answer them eventually, they need to build the world, just makes it harder to write about them sometimes. If you remember Gwen got the powers and not Parker, Parker is also dead now quite unfortunately so… that’s great, she’s also blamed for that. Gwen’s also been avoiding her father like the plague, probably due to the fact the he’s the Chief of Police and she’s wanted at the moment, might cause a conflict of interests. Gwen’s band The Mary Janes is having a falling out of sorts, as this Mary Jane is very self-centered. We’re also left on a cliff hanger with her first villain battle against her version of The Vulture, I wonder if we’ll see some exclusive villains for Gwen as well? I understand their will be familiar villains because of the Spider connection but it would make sense for variants as well right? 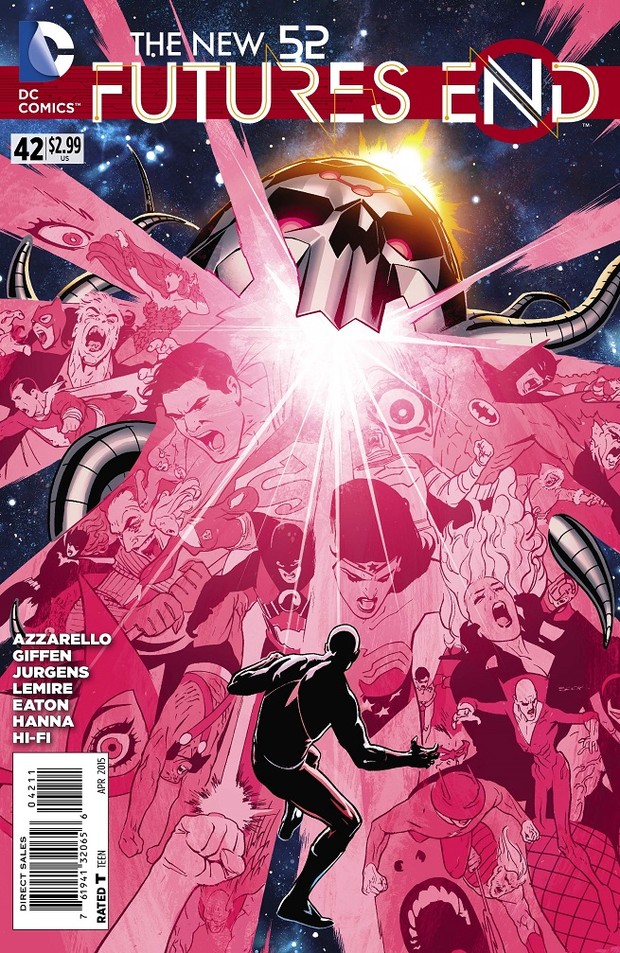 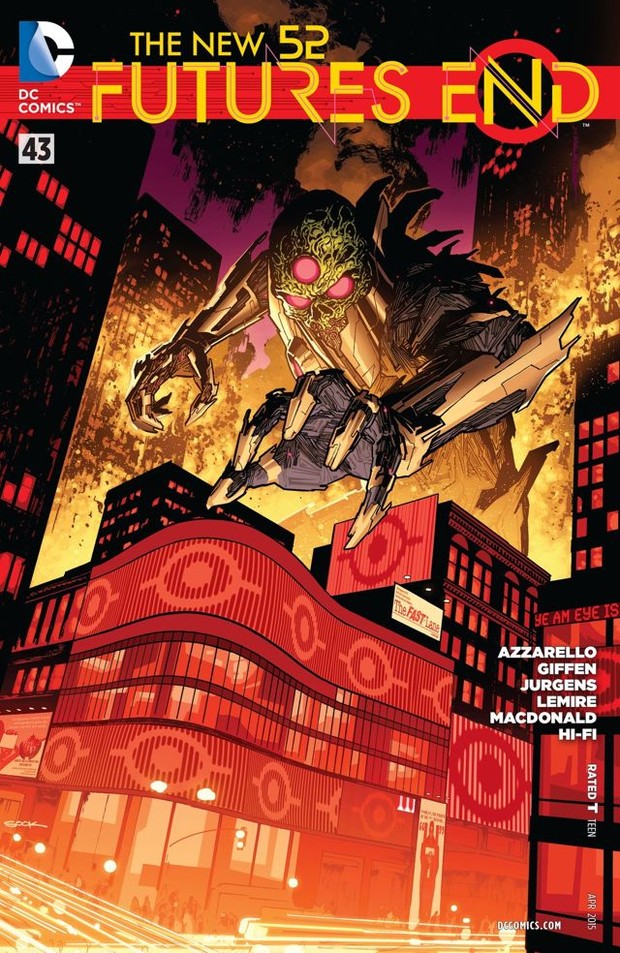 Lots and lots of fighting in these ones! Which makes sense since Brainiac is unleashing a full on assault, Palmers made it inside Brainiac though without being atomized (hue hue hue) as it originally looked like. Terry makes it look like he’s about to be finished but Alfred is back online and those orbs that are coming whizzing past make a useful weapon if you can plan where the next one will land. Palmers also saves Engineer again, because that won’t have bad repercussions later. Still… it did make it so Brainiac has to manually lift Manhattan up as opposed to things being super easy for him. Plastique’s robot double shows up and almost kills Plastique as well as Terry, we also find out that the Batker hybrid isn’t dead even with that hitting him. We get a hint that the world has already changed at least a little bit however since the Plastique bot isn’t quite sure what to do with Plastique. Unless It just determined it couldn’t kill Plastique because then it would cease to exist. It’s still not looking hunky dorey quite yet but that’s what the next couple of issues will clear up. Or make worse! Maybe this whole thing was something that couldn’t be prevented! Which would rustle my jimmies a bit.