Hey folks! It's been a bit since I wrote, so I apologize that this return is both a bit late AND a bit short, but by god I helped start this event and I will participate in it. A combination of physical, mental, and technical problems have made it difficult to play as much of Fallout as I'd have liked but with around 15 hours in my current playthrough I think I can say enough. So now, to offset the lovely things everyone has had to say about their trips through the wasteland, allow me to tell you why this game is fucking shit.

Fallout: New Vegas is an absolute mess. I got shot in the head, woke up in a doctor's office with a magic science machine that let me change my face, and answered some questions about inkblots that gave me perks that I immediately swapped out to things I would actually use. I ventured outside, sun blinding my fancy new eyes, and learned how to shoot a godawful rifle at lizard things and helped a complete stranger gather the town's forces together to fight off the evil prisoners from across the street. 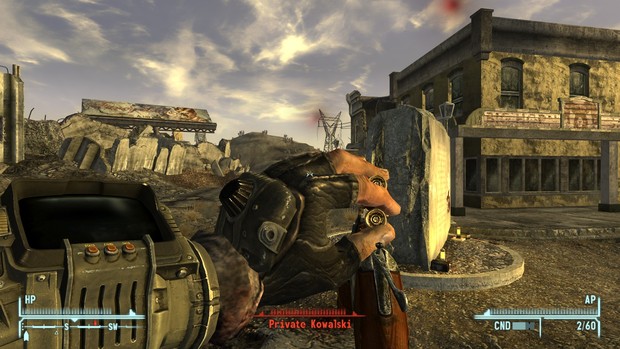 Now a fully fledged idol to the most boring shit town in the wastes I ventured out on my own, ready to begin my pokemon adventure! I walked across the street, saw more prison folk who were now none too happy to know me thanks to my (apparently quick to spread) reputation for killing their companions, and proceeded to murder them in self defense, gaining the dumbest nonexistant mechanic I have ever seen: KARMA! Murdering the inmates who may have simply joined the powder gangers because they had nowhere else to go gave me good karma. Stealing their stuff from the boxes around their corpses gave me bad karma. WAT. Murder all you like but please for the sake of all that is holy don't steal from them! What does karma actually do? WHO KNOWS!

There are other lovely mechanics that DO matter though, and boy are they fun! You very quickly learn from the game that you can only carry so much in your inventory. Don't wanna overburden yourself! Understandable I say. I'm only one man. I start to walk off and the game calls out to me “Oh, by the way! Did I mention that everything you use is in a constant state of decay and the primary way to repair it is to carry around multiple copies of the same weapons and armor so that you can use them to repair each other? So have fun carrying 4 shotguns around!” I'm starting to understand why my poor character is full of anger and ready to murder. 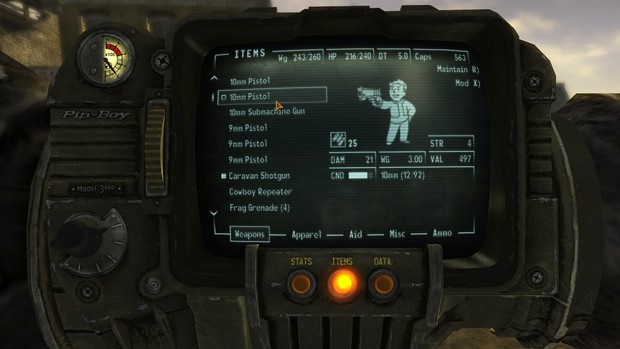 FNV is the story of a courier on the edge. By the way, did you know you played as a courier? Cuz I'll be damned if it was ever relevant in my time with it! I didn't get to deliver SHIT. If ANY game was gonna have fetch/delivery quests surely this would be the one! The most courier-esque job I did for anyone was a sniper lady who asked me to check out and report back on the status of a lovely whoretown called Nipton that was apparently on flames, and not of the rock and roll variety. No hurry though, take your time. Upon arriving at my destination I was met with crucifixions and a group of people who apparently really liked to cosplay as centurions.

They had decided to murder everyone in town for reasons and so I tried to murder them, but that didn't go well. Any of the 5 times. I made the tactical choice to be a little bitch and let the group go about their merry way and proceeded to loot the remains of the previous inhabitants, making my way through their houses and their rather large town hall, until something new happened. As I made my way to the top of the town hall and explored the mayor's room, I unlocked his closet and looted his stash of ammo and weapons to the point that I became over encumbered. I began dropping stuff I'd never use, but accidentally dropped a useful piece of armor which fell behind the mop bucket. I jumped onto the mop bucket to retrieve said armor and became stuck in the mop bucket.

After hours of killing deadly radioactive beasts and humans and solving problems, the biggest obstacle I met over the course of my time with the game was a mop bucket. I was unable to jump or move around. I attempted resting to see if it would maybe be fixed after waking up, but nope all it did was eat my autosave. Not content to load my quicksave from outside town I began tossing dynamite and grenades at my feet, at which point I discovered that my character was a fucking champ. Even in the face of point blank explosions he was perfectly fine to sit there and just grunt a bit. After many explosions I finally fell from the mortal coil and reloaded inside of the bucket. BUT WAIT! PRAISE CHINESE JESUS I COULD JUMP NOW! 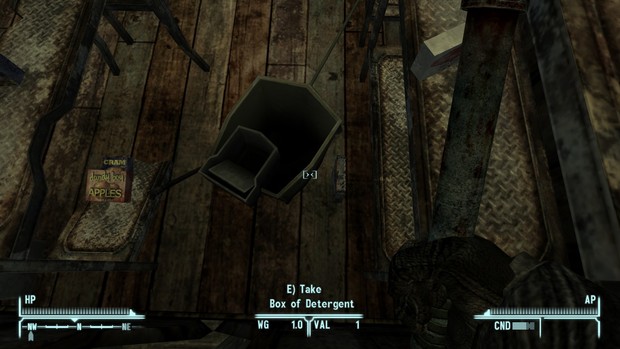 I saved the shit out of that game and made my way outside town hall and began to finally finish exploring the town. Oh wait, no I didn't, because upon trying to walk into one of the small houses in town I suddenly began bouncing uncontrollably for no reason whatsoever. Just bouncing constantly, unable to stop, and unable to fast travel or anything because I couldn't “do that while jumping or falling.” I literally now had the opposite problem of what I had been suffering from just 3 minutes earlier. I bounced so much that my game crashed.

So why, through all of these things, do I still want to go back for more? I met all kinds of people and did all kinds of jobs on the rest of my trip through the wastes. I got Walker Texas Ranger pardoned so he could run a roller coaster town with his own brand of street justice, I helped some zombie folks fix a rocket so they could go to space to meet god or some weird shit, I helped a sniper lure a sweet old lady out in front of a t-rex so he could murder her because she was actually a pimp in the slave business apparently.

I did all kinds of stupid shit in that desert, and I'll be damned if I for some stupid reason don't want to go and do more. Fallout: New Vegas is a mess of a game, but it sure can be an enjoyable mess. Hope you enjoyed this incredibly dumb take on the blog assignment, and thanks for reading.