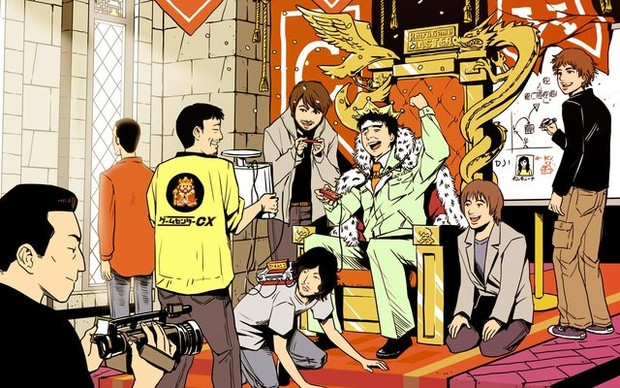 I've tuned in to my fair share of video game playing personalities in the past. Most of which I still follow to this day. First, I discovered The Angry Video Game Nerd after seeing countless of "This guy ripped off AVGN!" comments on Irate Gamer videos. I don't remember how I found out about Irate Gamer though. Then I caught wind of Two Best Friends Play in 2013, which quickly became one of my favourites. I also found out about JonTron a few months ago and worked my way through his channel and some episodes and best-of compilations from his time in Game Grumps. Now, I'm once again (very) late to the party and have just found out about this great show. 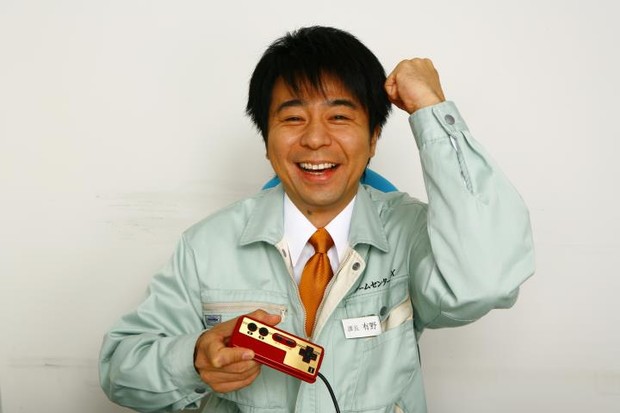 Started in 2003, predating the era of Let's Players, Angry Nerd personas and even YouTube itself, Game Center CX is a TV show starring Shinya Arino, who's employed in a fictional company which the show is named after. "Arino's Challenge" is the main feature of the program, where he sits in an office and marathons a game to reach its ending or complete a certain challenge within the game. With him not being very good at games, the "You have to reach the ending" rule is often taken to its most literal interpretation, employing any means necessary to reach that goal, seeking help from strategy guides and his many assistant directors, who would sometimes even play through hard segments for him, whenever he gets stuck. So long as the last segment which leads to the ending screen is done by him. 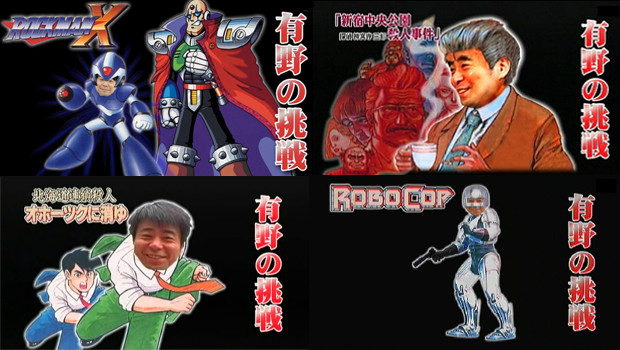 They also have lots of fun with the title cards.

The show has gotten quite popular, his green uniform, orange tie and penchant for cooling pads iconic among fans. It's still going strong after 18 seasons and several specials and live events. A movie is supposedly on its way. And it has games too! You may know it more for its Western title, Retro Game Challenge. 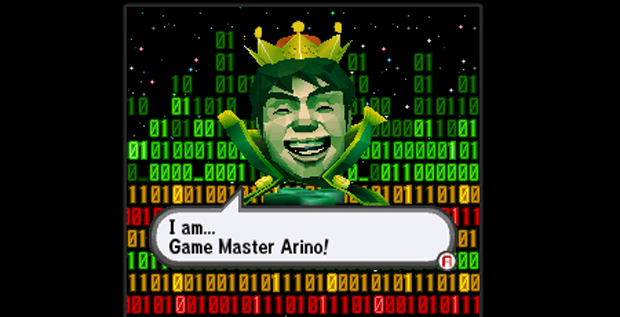 The challenge portions were not actually the main draw from the start and it's focus was initially on featuring various Japanese game companies, detailing its history, conducting interviews and whatnot. Challenging a game from that company was just one small part of it. From season 2 onwards, Arino's Challenge is now the highlight, accompanied by several side segments that serve as nice breaks between the playthrough and makes it more akin to a variety show than just a Let's Play. Still focused on retro games, some segments retain the spirit of the first season with more developer interviews. Some are as simple as a brief showcase of a handful of games from a certain system, company or time period. One popular segment is "You Should Visit This Game Center Sometime", a travelogue where they visit arcades, stores or other places around Japan that feature retro games and other things of note, as recommended by a viewer. I found these segments quite interesting because you can see that there are tons of games that never made it outside Japan. Later seasons introduced sillier segments like "Shocking Videos MAX" where they show gruesome, SHOCKING scenes in video games such as crashing your bike in Excitebike, or "Family Computer Sniper" where he plays sniper using an SNES Super Scope and tries to identify game cartridges from afar. 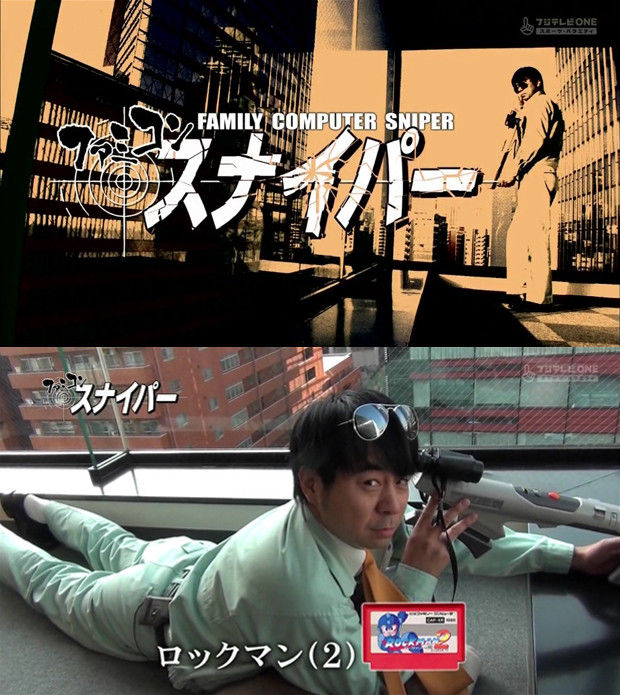 The corporate/office theme adds a lot to the show's charm. Their silly antics and the fun and colourful atmosphere of most games are made even more off-beat by the serious, formal and "professional" tone they try to practice being in a workplace environment (which they almost always never manage to keep a straight face whenever they do so). That mixture of seriousness and silliness is something I observe quite often in Japanese humor and I'm a really big fan of it. Arino himself is a very charming guy. His laid-back, clumsy and often childish personality is what makes the show, watching him react to things with such bluntness, wonder and enthusiasm. After all these years, his skills never seem to improve and yet somehow, out of sheer tenacity, he usually manages to succeed, after several continuous hours of playing. They make sure that fact is known, telling how much time has elapsed, how many attempts he's made at one segment or showing it slowly getting dark outside the building. Plus, the way the show is presented along with the epic and dramatic delivery of the narrator throughout the whole ordeal, even when cracking a joke, is icing on the cake. It gets you more invested in his struggle and really makes you feel like you're watching so much more than just some guy playing games that are almost as old as he is. 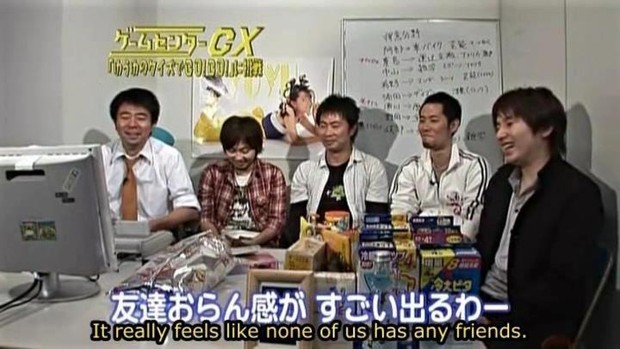 I finished watching all of season 1's challenges, the entirety of season 2, as well as a couple of odd episodes here and there, and I think the show shines most when covering games of special interest, like an episode where he plays a jogging marathon with the Japanese Power Pad, or the ones where he plays adventure games or dating sims. 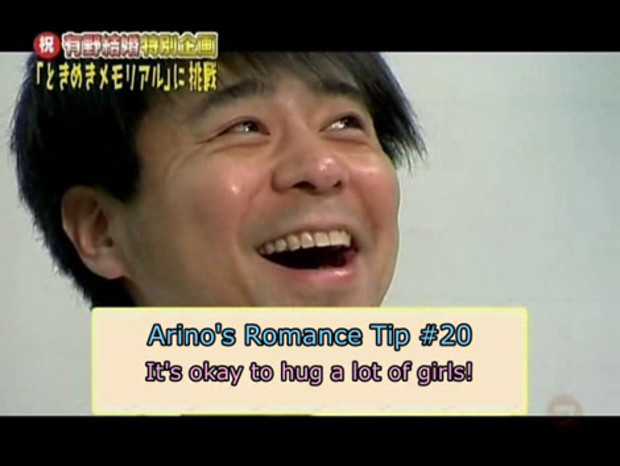 Needless to say, I highly encourage you to watch it. Definitely one of the best video game shows I've seen yet. I guess I also have to give a shout-out to Nanashi for passively introducing me to this show. Sometimes, an offhand comment or picture is all you really need to get acquainted to and eventually engrossed in a certain thing.