THE MAGNIFICENT NINE OF THIS TRUCK TOID 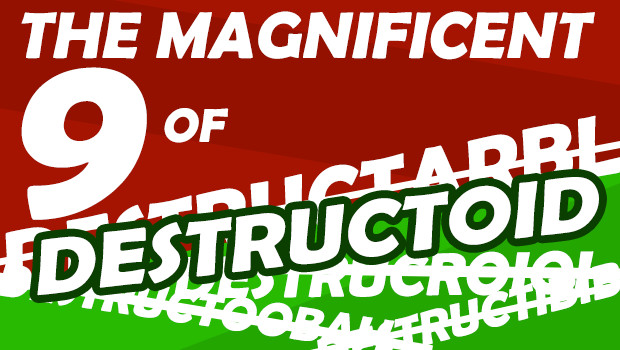 While I haven't even been around for half as much time, it certainly feels like an online home to me. Lots of good times have been had, both in the front page comments and in the blogs, and it's exciting to me that we're getting close to the big 10! One whole decade of also cocks!

To celebrate, I'm gonna be doing OpiumHertz's "challenge" of writing about the nine Dtoid members who have left the biggest impression on me. There are tons of competition here, and many worthy members have been left out. You absolutely should not be sad if you're not on the list, because there are very few members on here that I've ever had a problem with, and chances are I still think you're the absolute tits!

Note that a lot of these "awards" are earned due to people showing themselves as much more than abstract avatars wrapped in internet memes and culture (which is still a bit too rare these days), and as real life people with varying tastes and complex personalities. Be yourself, is what I'm trying to say. :)

Let's start off with the top dawg of anything community related on this site, Dr. Dixon himself! His enthusiasm is indestructible, and his efforts have made it so that the blogging space has become my favourite aspect of Destructoid overall. Even when I have nothing to write, I've become so attached to the Cblogs that I check them pretty much every day.

Andy's posts are ones that I always look forward to, regardless of whether it's a silly dick joke or the announcement of a cool new event or feature. I just straight up really dig the guy, and I'm glad he's in the position that he's in. Really, how could you not like a guy who gives you a thumbs up with every post?

Mr. Andy Dixon is the hero Destructoid deserves, and the one it needs, so it's all pretty neat.

Even though this guy pre-ripped off my title, I can't deny he's left an impression. For one, I adore his username. It's very fitting for a gaming site, but in an unusually clever way, one that certainly beats the cliché of [game character]+[age/random number] that people still use. Aside from that, his God Hand blog also inspired me to step up my image game when it comes to blogging, seeing as that one was made entirely with images, allowing for a lot of creative freedom. He also hosts the 'You can't say that' competitions, which, aside from being a lot of fun, also let me know that auto-playing Soundcloud songs is a thing you can put into your blog, as you have probably found out by now.

Aside from all that stuff, though, Luck is a swell guy. Very friendly, positive and funny, and his latest blog is all the evidence you need for this.

I was Luckrequired's Secret Santa last year, and that's one chimney I couldn't be happier to climb down!

Captain Kittenbeard belongs on everyone's list, honestly. While a lot of thing initially attracted me to this site back in late 2011, Occams is what made me stay. That's right, if any of you don't like me, you can blame this guy for making me not want to leave. Here's why:

What I first saw in Occams was a person with a weird username saying weird things. That's all well and good, and not the first time I've encountered this, but what I eventually started to notice was his popularity. His uniqueness didn't turn people off, but rather, it attracted them to him. That's unusual, and it made me happy to see, because that's a sign of a good community. Occams' comments are almost always original, unpredictable and hilarious, and even the more basic ones are very positively loaded. I have this image of him being like a wise man, with his calm and eccentric behavior being almost inspirational. He's certainly one of the nicest and wittiest people I've encountered online.

Also he has like a million bands, which is awesome!

I originally got into reading about video games through stuff like top 10s, comparison pieces and other kinds of fun little articles and videos. Sadly, it seems like gaming media has drifted a little bit away from that kind of thing, which I don't understand. It's fun, and it often makes for a surprisingly good read/watch, so I think it has plenty of reason to exist. Thankfully, Ben Davis (formerly known as bbain) has done plenty to bring it back, and I very much appreciate it. He has done a lot of top 10 lists already, and is currently doing a series called Experience Points, in which he simply talks about his favourite parts of certain games.

Experience Points is, in my honest opinion, one of the best things to come to the front page in a long time. It's the kind of content that every gaming site benefits from, and Dtoid certainly does. Ben has always had a very positive influence on this site, and ever since he became part of the staff, it's only gotten better.

I feel like I don't even have to mention how friendly he is, either. It's kind of been a recurring theme on this list.

The first big impression Luna left on me was her Crash Bandicoot 3 blog (which also makes my music choice somewhat relevant). It was a really entertaining read, and had a lot of images too, if not as many as Luck's blog on the same subject. That said, she is just as much of an inspiration when it comes to the visual aspect of my own blogs, as she puts a lot of care and effort into hers, to great results. I've come to really appreciate blogs and articles that have a distinct look to them, as they are usually the ones that I remember the most.

Since then, Luna went on to arrange the Secret Santa event last year, which was awesome, even if it wasn't so secret. We were also supposed to write about our experiences with each game, but that's taking a while. Regardless, it was a great initiative, and I'd love to do something similar this year. Events like these really tie the community together, and it has convinced me that Luna is a valuable addition to it.

Before Benny Disco tragically passed away from a severe case of explosive diarrhea, he was a very active and wildly entertaining member of our lovely community, who always seemed to have an equal amount of funny jokes and genuinely intelligent discussion.

Okay, so he didn't actually die from his own poop, but I rarely see him these days. Maybe I'm looking in the wrong places, and he's "secretly" been around all along, but I kinda miss him. See, the reason why he really deserves a mention like this is that his absence is extremely notable to me. He just has too much going for him, so he can't exactly go quietly into the night. Maybe he launched himself from a catapult, in an attempt to get a high score. Seems like we'll never know.

In any case, there's no doubt that Sir Disco is truly the most amazing frog who's ever graced our site.

This is a difficult one, because I can't really put my finger on exactly why this guy has left such a big impression on me. I think it has to do with him saying and doing a lot of small things rather than a handful of larger ones, yet it all adds up to the same amount. I'm not really in the mood to do the math right now. All I know is that my instincts say "pick this guy", and I'm choosing to trust them.

What I can talk about is his username, and how proud I am of myself for remembering the second L in 'scholarly'. That seems to be a common mistake, but I am done with it! No longer shall I make that particular typo! There are plenty of others to make, and I barely havr tiem for tehm alll as id.

No but seriously, this dude is swanky as fuck, and you should all follow him on Twitter!

He makes a lot of puns, and once had a show about food. That's two things guaranteed to get my blessing right away. I love puns and food!

I like Steven Hansen so much that I award his fancy name thingy with one of the best characters ever concieved: The Slugcat. Hansen is like our Slugcat.

Also, his last name is Scandinavian, which suggests that the blood of the North runs through him!

Also also, I think he made Rayman nachos once, which is super cool!

Again, if you're not on here, it doesn't mean I don't think you're awesome! It was a hard but honest list, and I hope that the people who made it on here really appreciate it. Otherwise, I'm gonna cry so hard that I'll vomit everywhere.