A Look at Video Game Ads of the Past: Game Boy

Welcome back to the latest entry in this series, where we take a look into printed ads for retro video games. I have previously compiled installments for Atari, NES, Sega, and SNES games, so check them out to see how some classic games were advertised in the past. I thought today would be a good occasion to continue the series, as my classes have all been cancelled due to snow and ice, the first time that’s happened while I’ve been at university. So, with roads a mess, I’m staying in my apartment, playing some Sleeping Dogs and possibly Journey for the first time, and listening to SMiLE by the Beach Boys. I was planning to write this yesterday, but the power went out a few times and flickered throughout most of the day. As a side note, I seriously recommend listening to SMiLE, especially to tracks like “Heroes and Villains”, “Cabin Essence”, and “Surf’s Up.” I didn’t know it existed in a finished form until last week, and have been listening to it almost nonstop since then. It’s an amazing piece of Americana.

Moving on, this entry will focus on ads for the Game Boy, Game Boy Pocket, and Game Boy Color, a span of more than a decade. I found these ads in Marvel/DC comics of the late 80’s and early 90’s, issues of Nintendo Power, and Nickelodeon Magazine. This entry will be shorter than most others in this series; for those wondering, I am creating an entry solely for Pokémon-related ads, so some ads for games on Game Boy and Nintendo 64 will be featured in that installment. 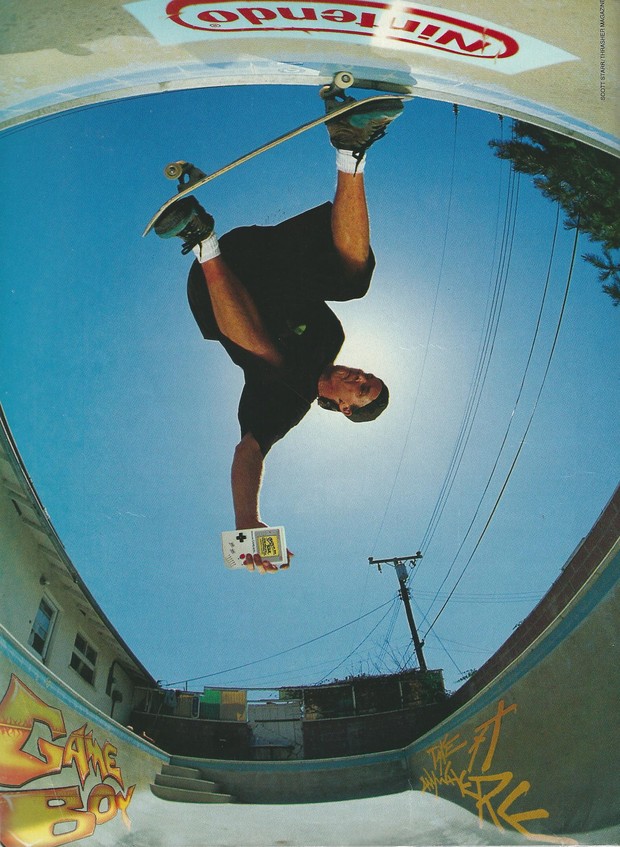 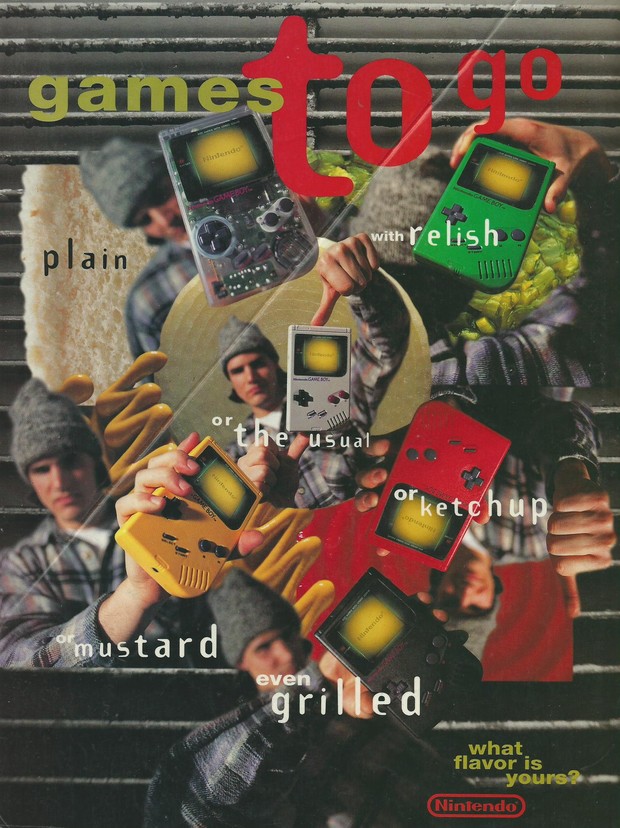 Not sure I've seen games advertised like food before.

Nintendo should seriously start doing this again with their handhelds. A Majora's Mask or Smash Bros 3DS? Please. Include a cheap pair of sunglasses and watch 'em fly off the shelves. 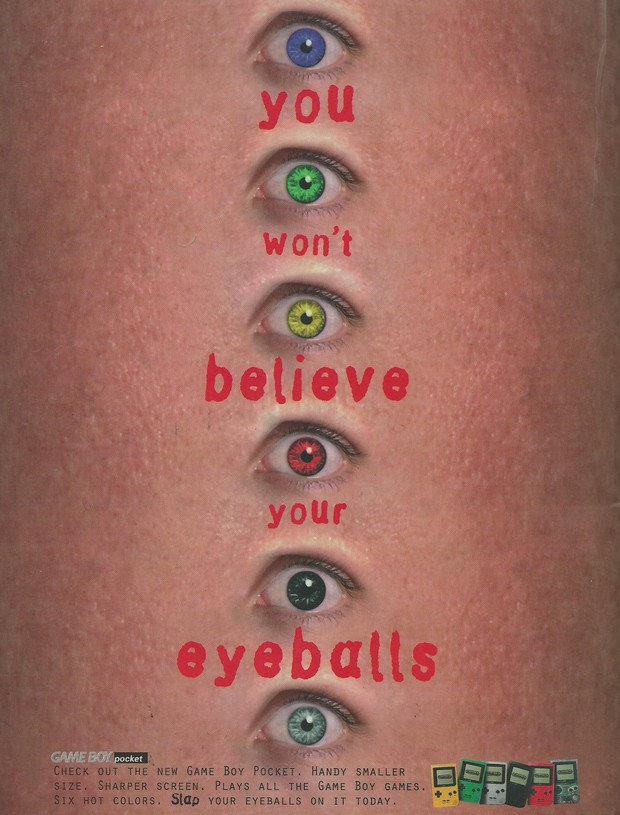 Nothing like some John Carpenter horror to sell some Game Boys. 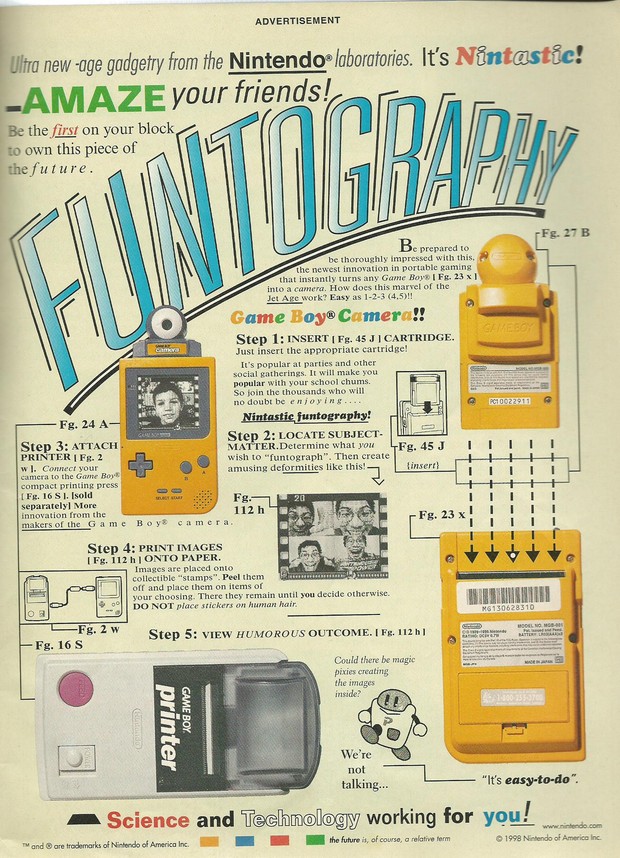 I never owned one of these as a kid, but thought they looked cool in an age before camera phones. Though the quality was terrible, I would really like to have one of these. 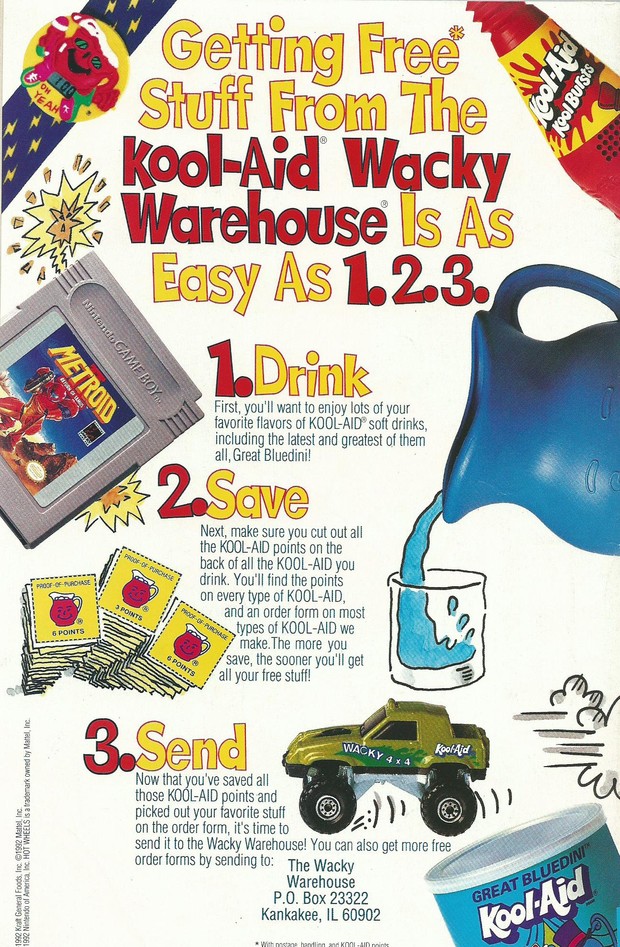 One of many Kool-Aid ads I ran across while compiling this series. 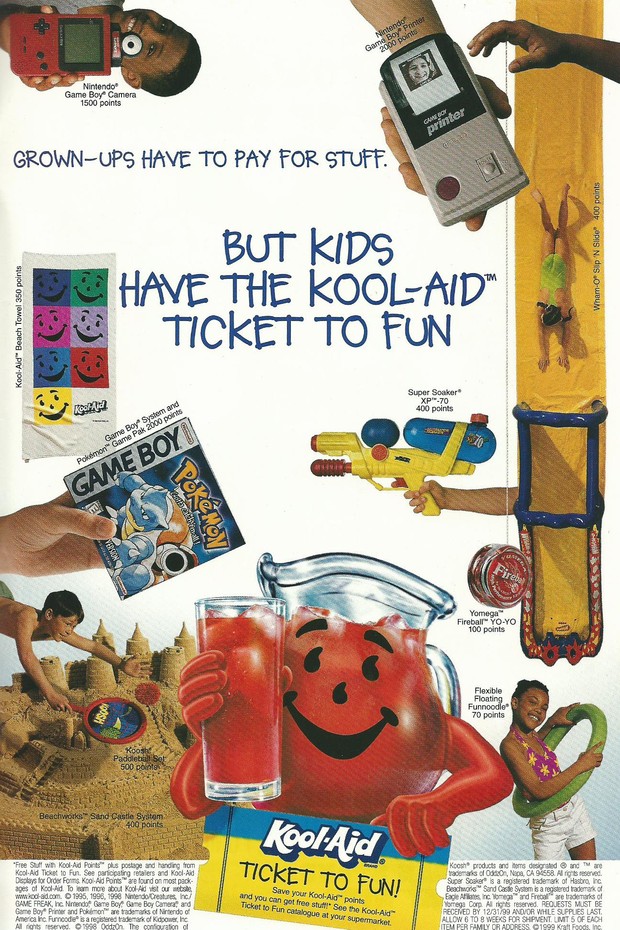 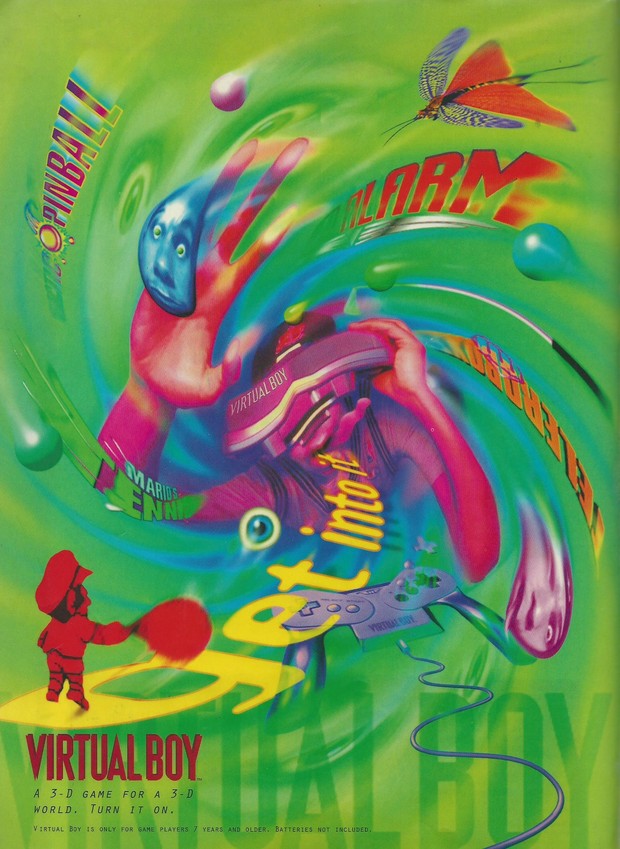 I wasn't sure where to put this ad, since it isn't exactly related to the Game Boy and was its own console. However, this is the only Virtual Boy ad I came across and thought it might as well belong here.

Wow. If they were going for a system that messes with your head, they certainly succeeded. I know they were trying to show off the Virtual Boy as a 3 dimensional system, but everything swirling makes it look nauseating. 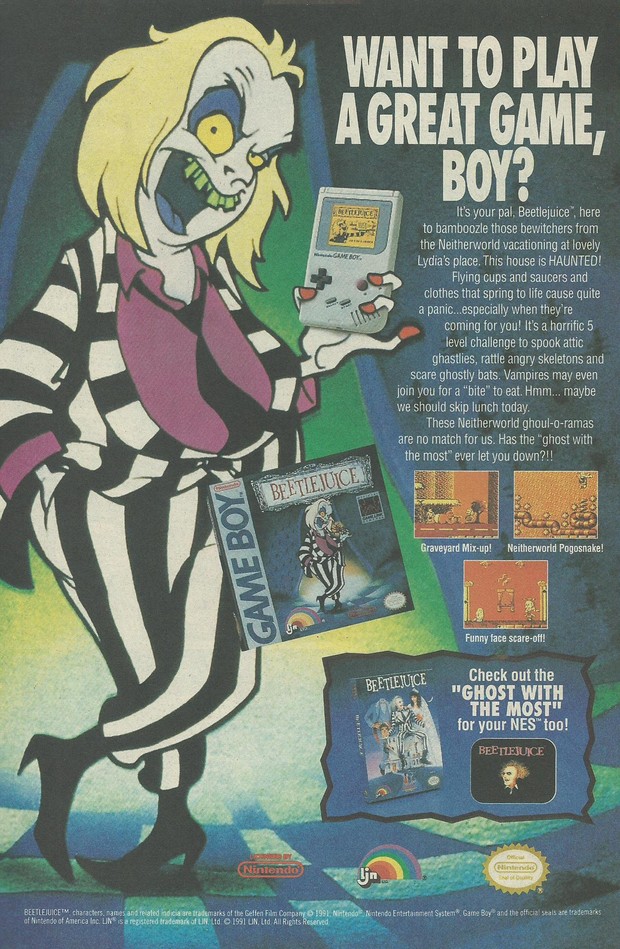 "If so, try looking someplace else." 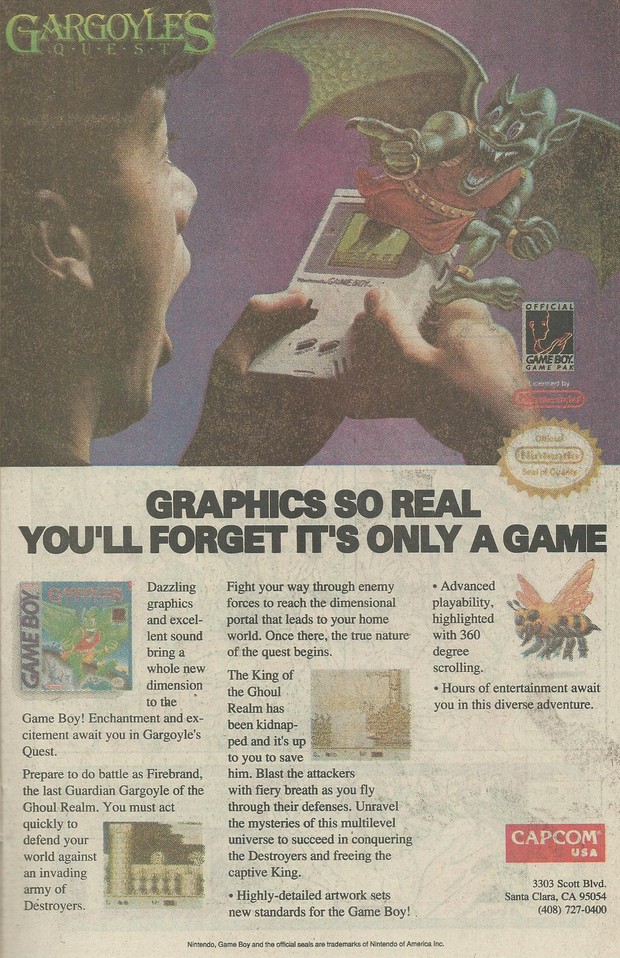 A lot of these earlier ads tried to blend the game with the real world; this one does a decent job of achieving that. Still, I'm not sure what it means by a "diverse adventure." 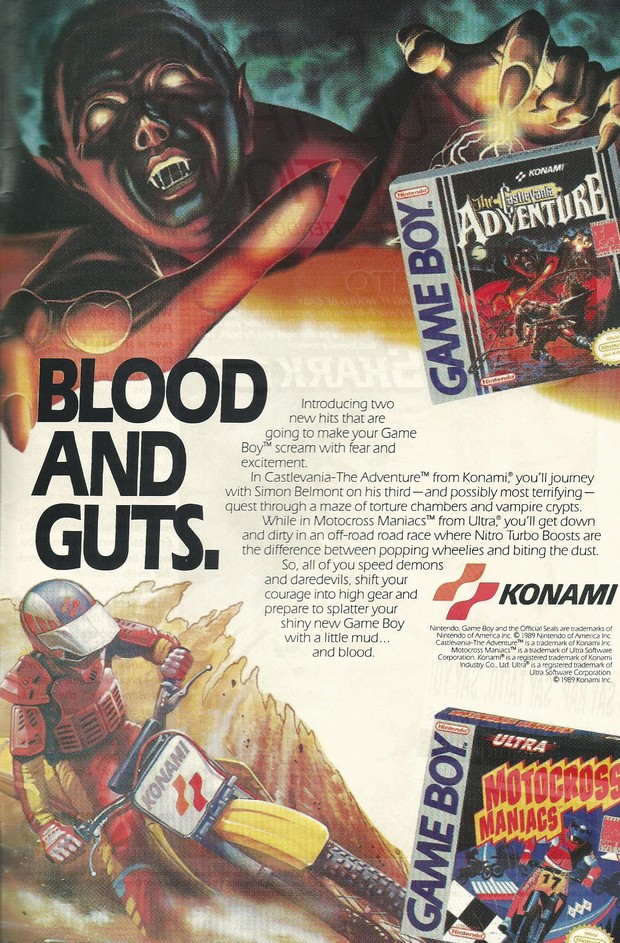 An interesting combination of games, but they don't really blend well in a single page ad. 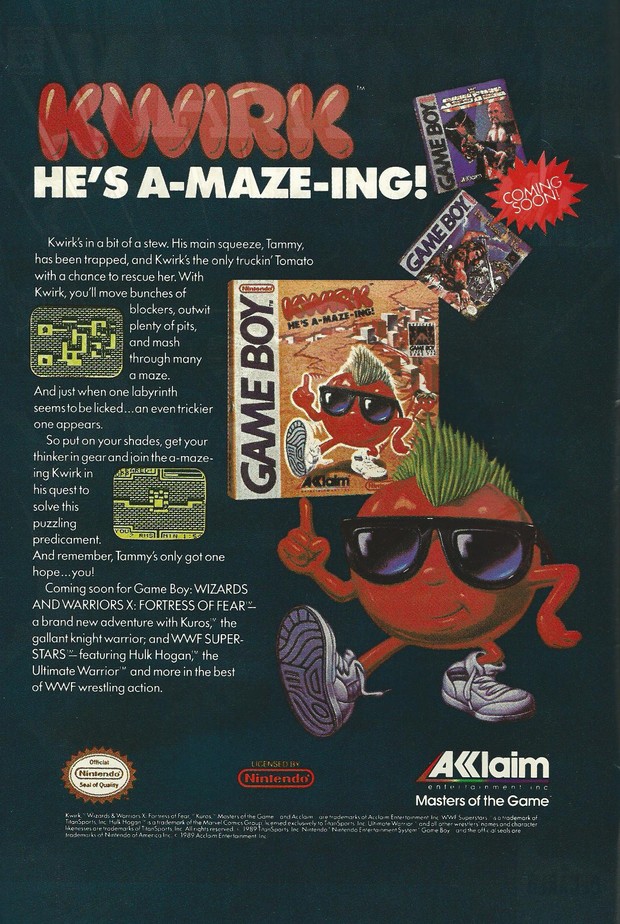 Is it me, or does he look exactly like Cool Spot on Genesis? Both are red circles wearing sunglasses and sneakers. 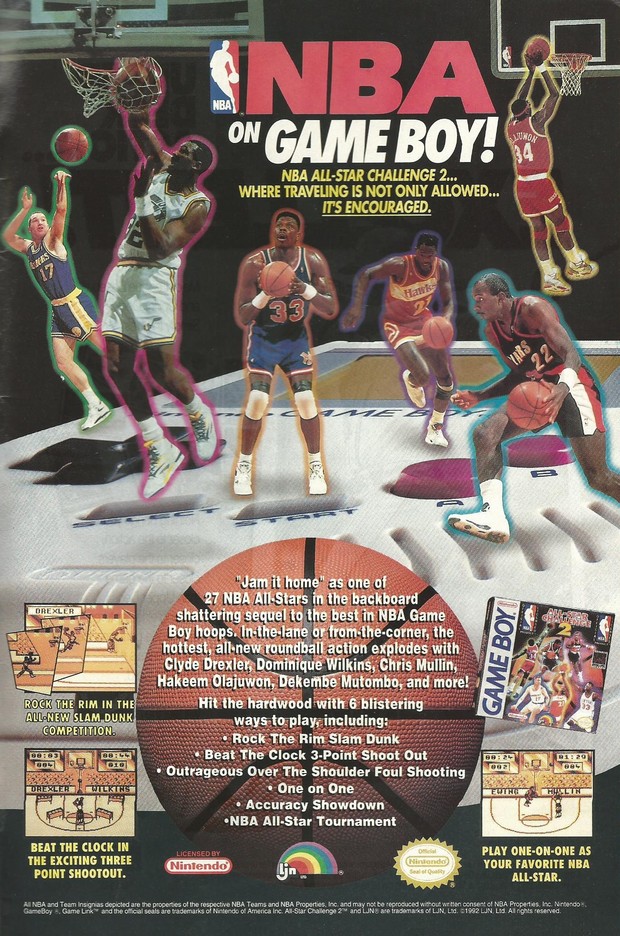 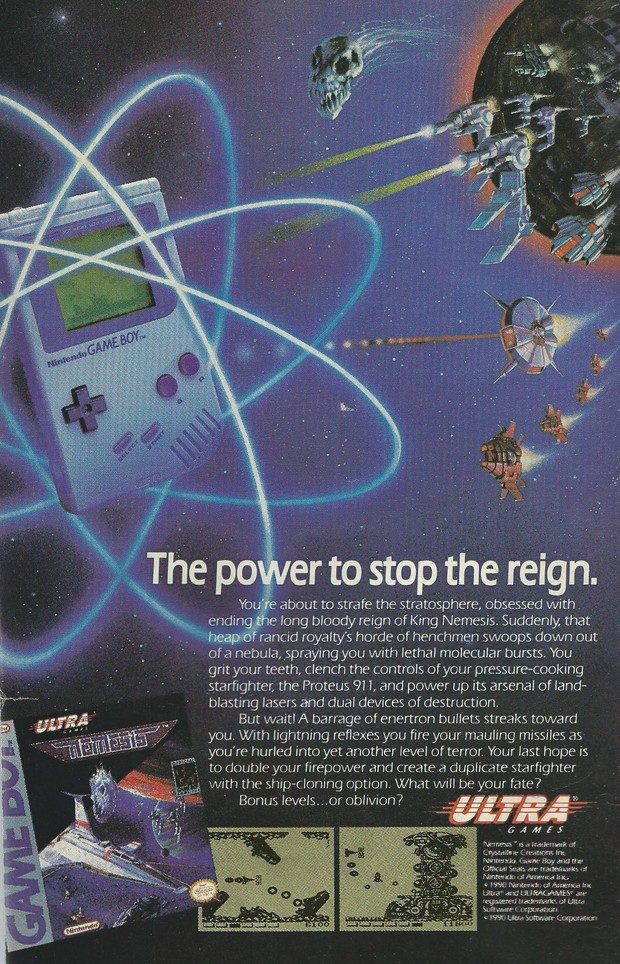 I really like the artwork on this one and the inclusion of a Game Boy in the game's world was a neat touch. 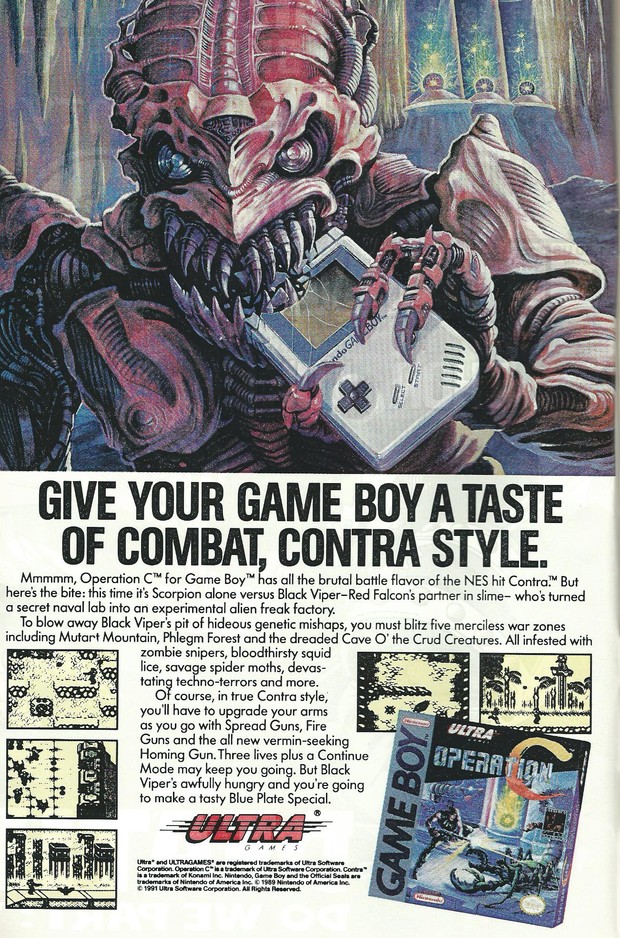 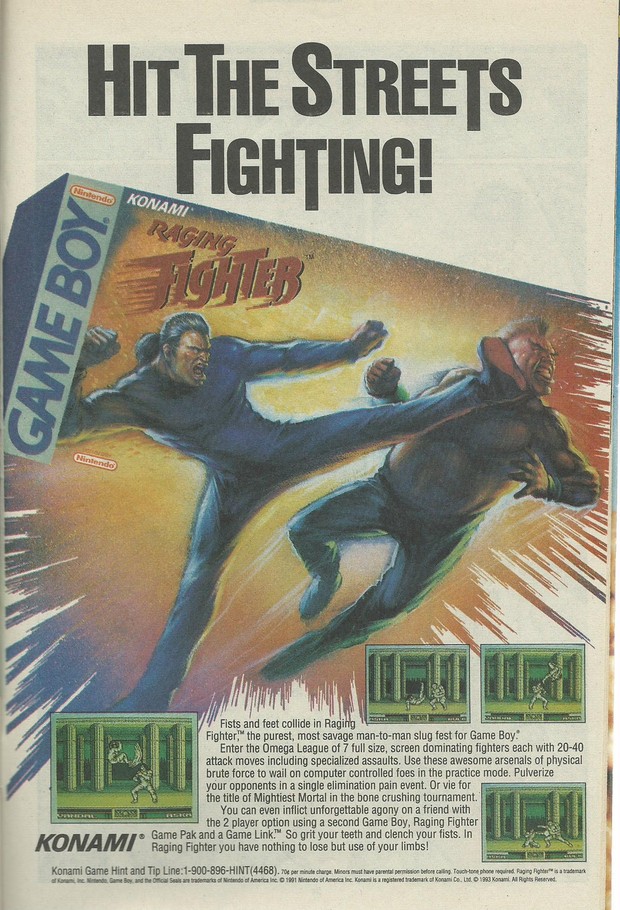 An interesting design choice here. I like how they used the game's box art as a springboard for the ad, with the characters breaking out of the box. 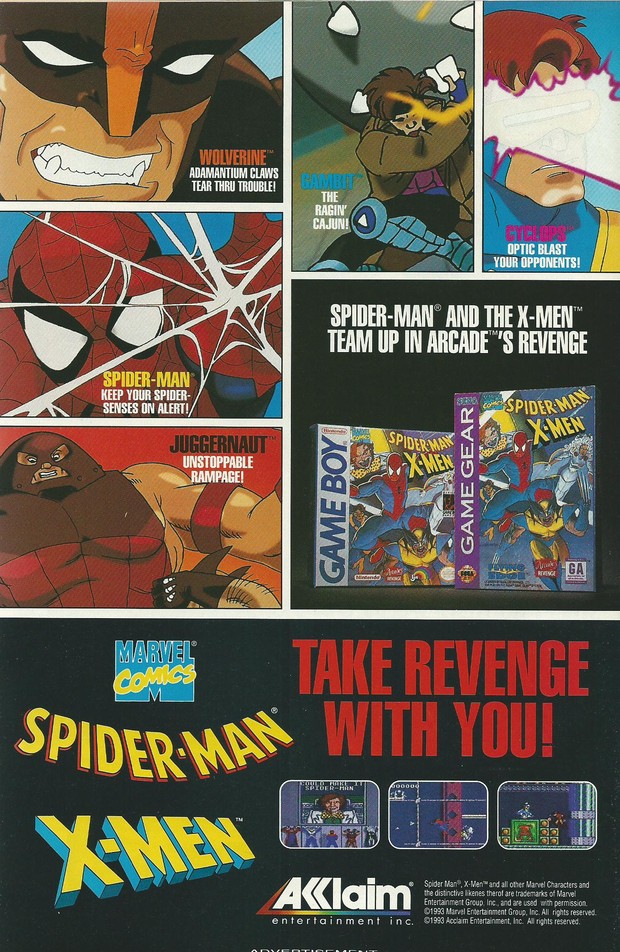 Can't go wrong with a Spider-Man/X-Men team up. 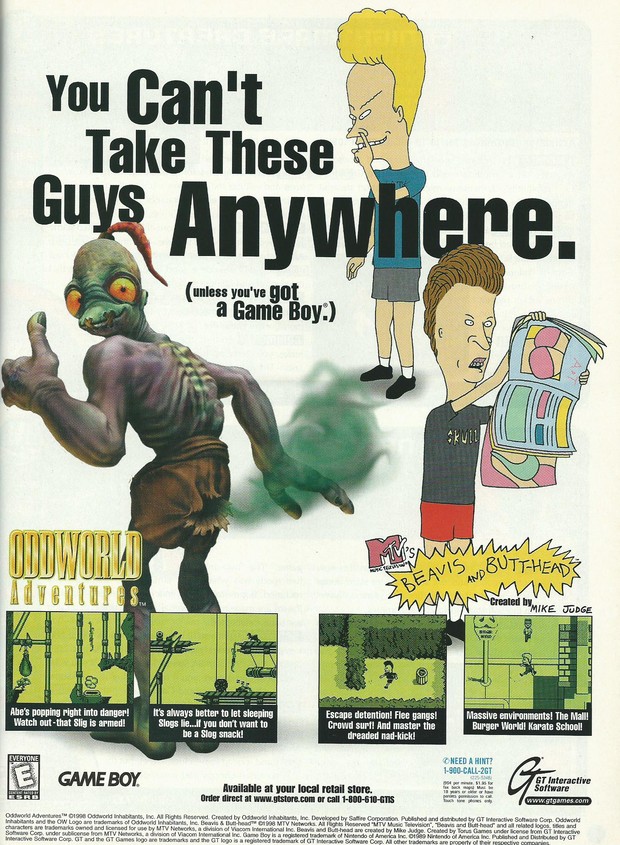 I've heard great things about the Oddworld series, but have never actually played any of the games myself. 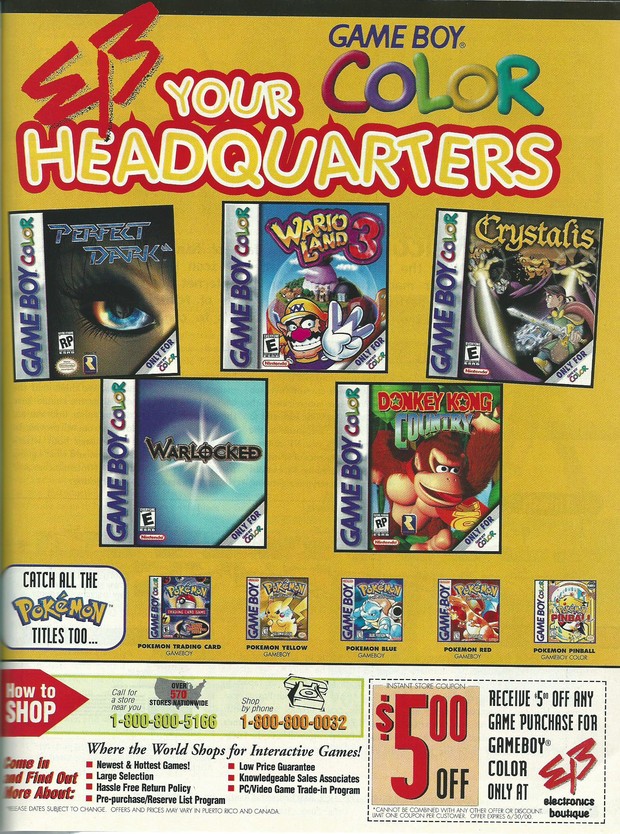 I miss EB Games. I used to go there all the time before it was bought out by GameStop. 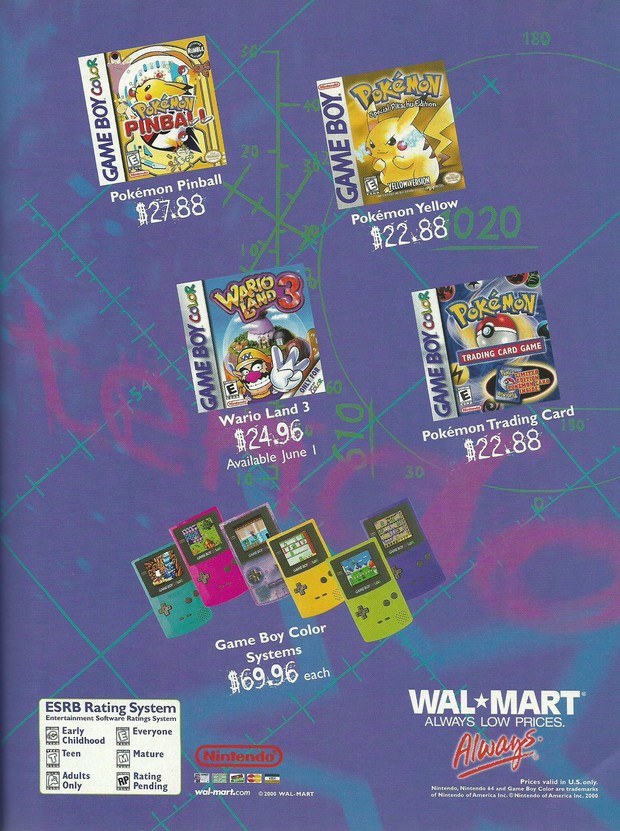 I know I said there would be a separate entry for Pokemon games, but I made an exception in this case, since it covers Game Boy overall. It's cool looking back at prices for video games and how much they've changed. 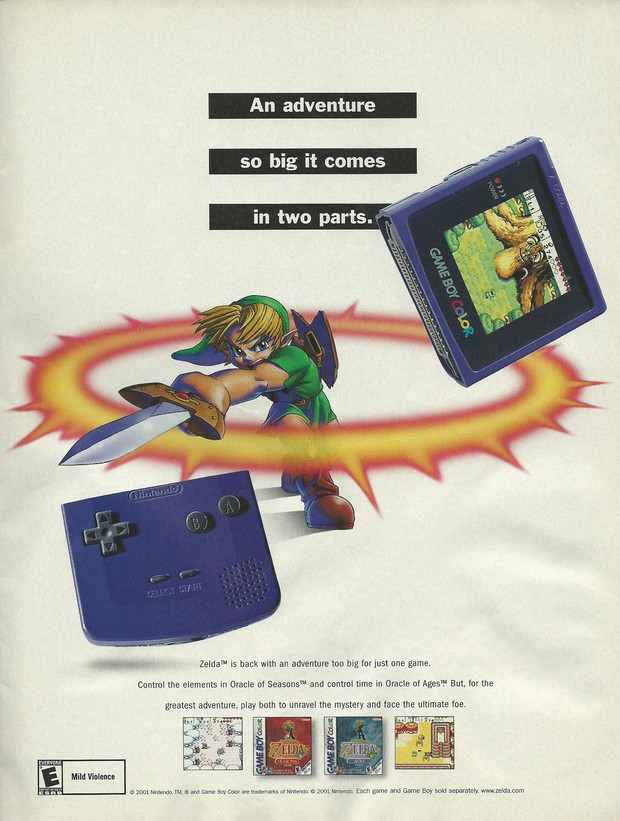 A great ad that effectively hypes two games. Neither of which I've played. I should get on that. 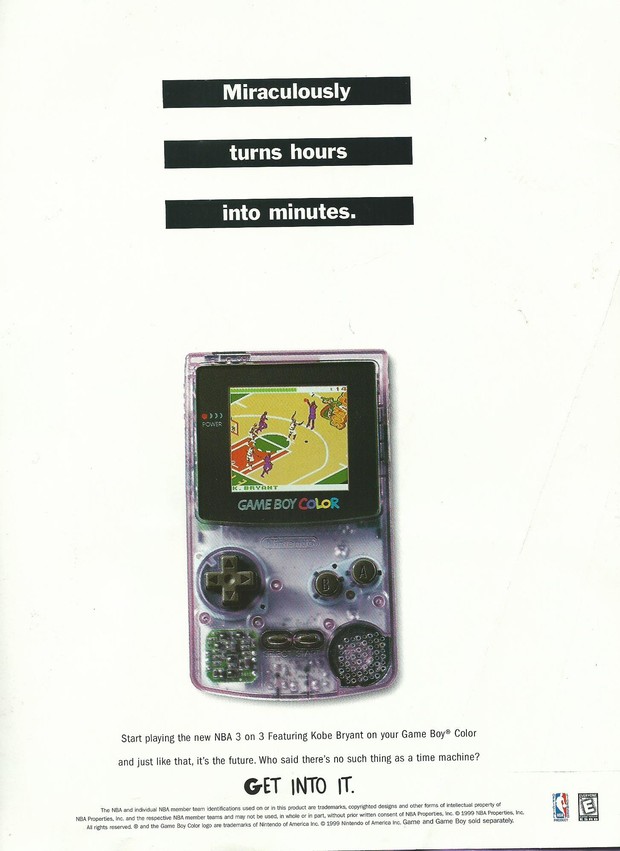 How true that statement is. Definitely the mark of a good game. 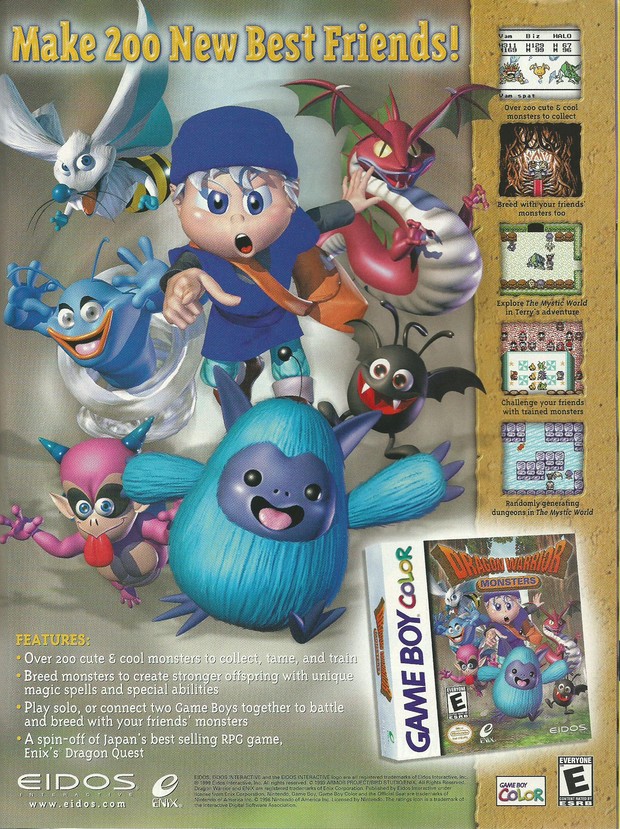 I always forget how long the Dragon Warrior name was used for the releases in the US. 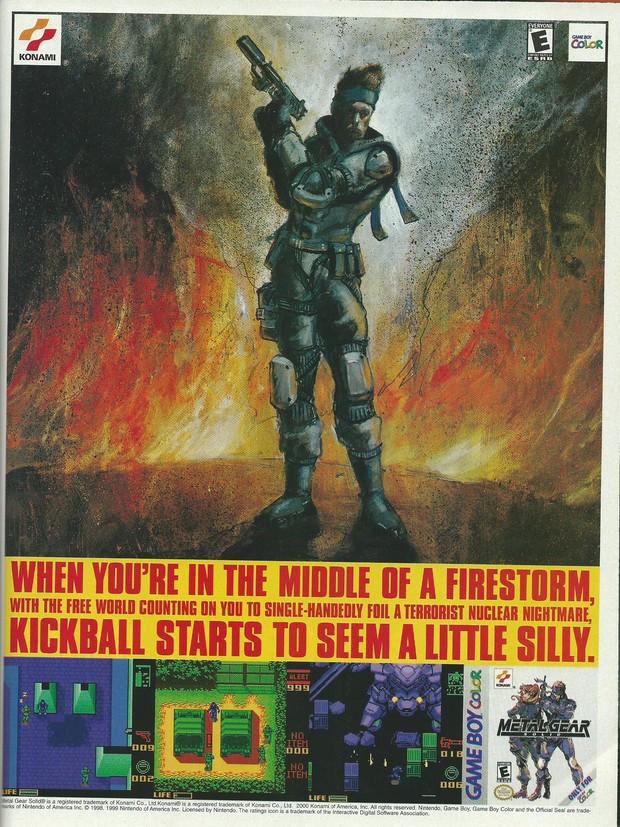 Despite being a huge fan of the Metal Gear series, I have yet to play this game, but have heard plenty of good things about it. Seriously, with art like that, how can you go wrong? 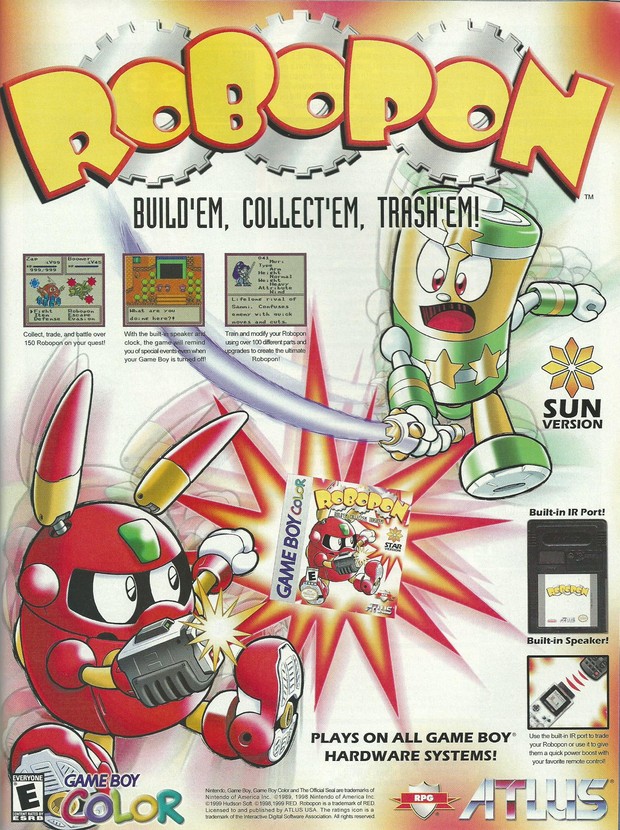 A Pokemon clone courtesy of Atlus. 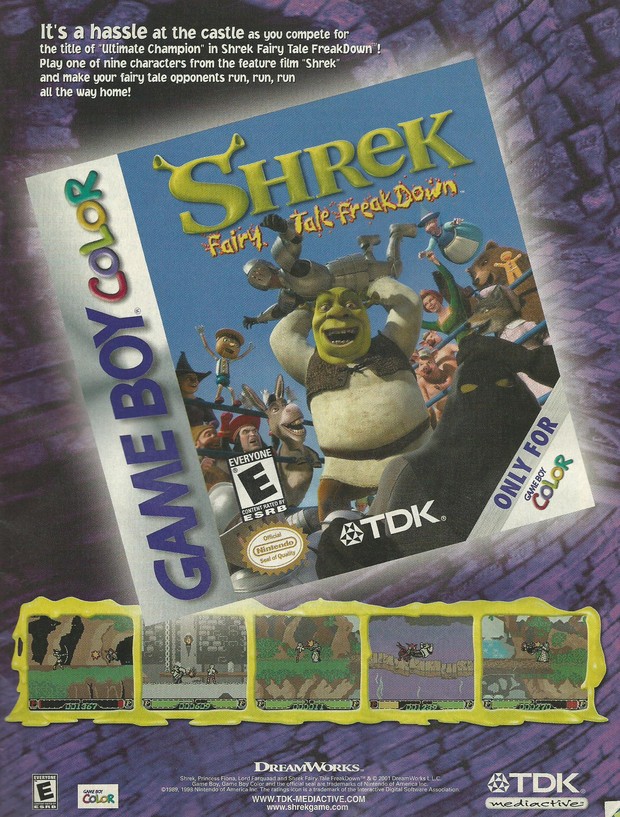