There’s not much to say about Skyrim that hasn’t already been said a million times before. The game offered hours upon hours of adventuring in a huge open world unlike any other and it’s hard to believe it came out more than three years ago. Since Valentine’s Day is right around the corner, I thought it would be fun to take a look back at Skyrim, particularly at the romance and marriage aspects of the game and share my experiences with those.

Like so many others playing the game for the first time, the first few hours of Skyrim felt amazing. After going through a short linear sequence, the world is completely opened up before you. It was an absolute joy just wandering through the mountains and stumbling upon new quests and stories. There was so much to do: you could join the Imperials or Stormcloaks, become a werewolf or vampire, and develop any job or attribute of your choosing.

Of course, one of the many choices you could make in the game was marriage. Looking back, there are dozens of people you can potentially marry, of different races, genders, and occupations. Early on, with so much to discover and do, I wasn’t sure if I would get married in the game or even have someplace to settle in. I was pretty sure I owned a house in Whiterun, but I only seldom visited it and only then to have a place to discard my dragon bones. But, thankfully, the ever-faithful Lydia had sworn to carry my burdens. To tell the truth, I often forget that she exists at all. 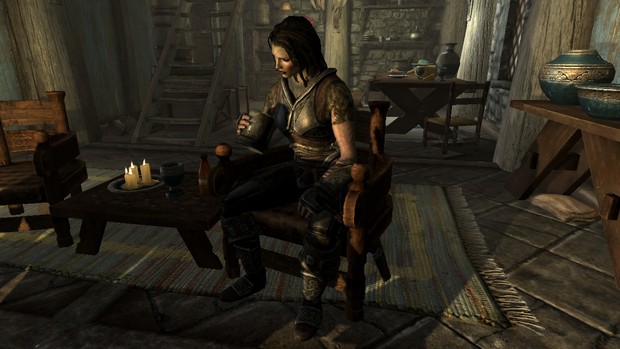 My Thane is sure to be back soon.

And that’s when I came upon Riften one day. Walking through the streets, I met probably the coolest-looking character I had seen thus far: Mjoll the Lioness. 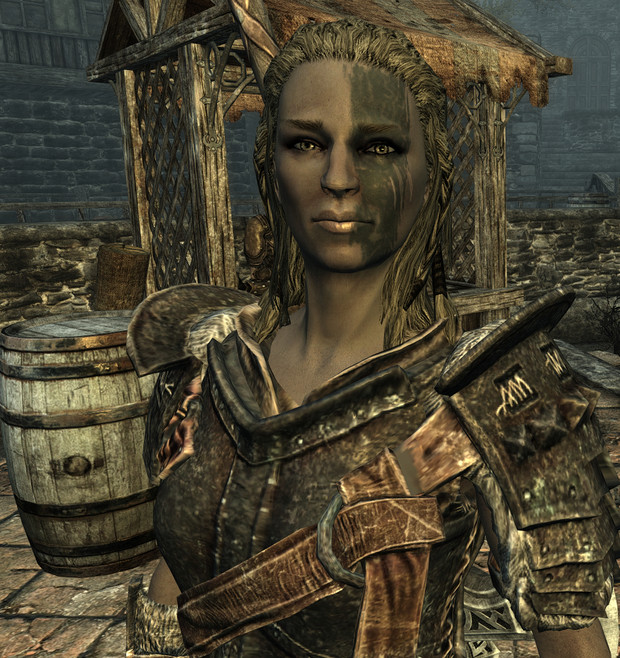 More than a name, she had an awesome title. Plus, she had some cool face paint/tattoos. She was a warrior, able to handle herself in a fight and intent on fighting the corruption laden in the city. As a child, her village had been burned to the ground and her family murdered right in front of her. So, basically, she was Skyrim’s Batman. But not Batwoman, because that’s a completely different character altogether. So, Mjoll was like the female Batman. Plus, what’s not to like about her name? Mjoll the Lioness. It’s a great title that entails respect, authority, and power. Plus, she’s ten times better than a certain someone with a similar title. 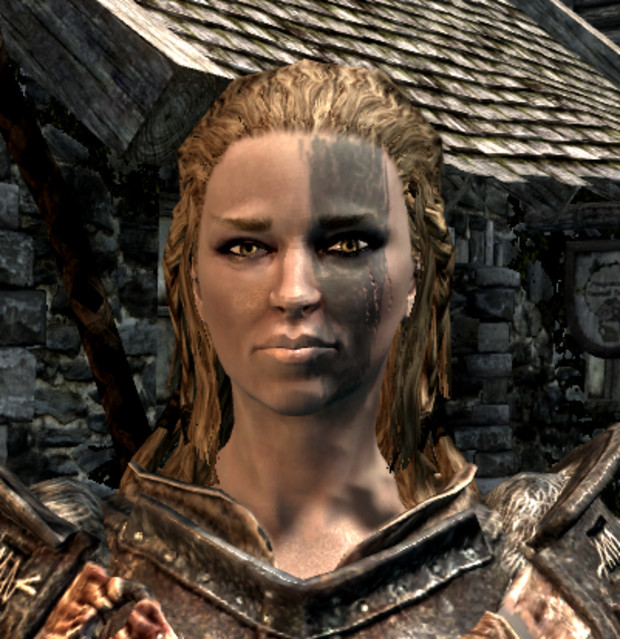 Eat your heart out, Aela the Huntress

When I first met her, she explained that she had been adventuring in some Dwarven ruins, where she was overwhelmed by automatons, lost her sword, and nearly lost her life. I agreed to bring back her sword and embarked on my first trek into the Dwarven ruins. The ruins are some of the best-looking environments in the game; the machinery and steam technology are a far cry from the forests and caves found in much of the game and made for a creepy landscape to explore.

After fighting my way through the challenging and trap-filled ruins, I defeated a Dwarven centurion and retrieved Grimsever, Mjoll’s sword. After returning her sword, I took the plunge and asked her to marry me. She agreed and we had the ceremony in Riften, filled with people I had at some point or another done some random quest for and completely forgot about afterwards. Apparently they liked me enough to travel halfway across the country just for my wedding.

Since Mjoll was dedicated to ridding Riften of its crime and corruption, I turned my attention to the town. I met the ruling family, the Black-Briars, and instantly hated their pompous and self-righteous attitudes. Truly, the town needed new leadership. Since it was impossible for the family to actually die, an all-out blood bath was ill-advised. I should know; I tried to straight up murder them a few times. I looked up potential quests, but found nothing to indicate the Black-Briars could be taken down.

So, I decided to do my own vigilante justice, just like my Batman wife. At night, I broke into the family’s estate and stole everything in sight, from silverware and gold to fruit and forks. From valuables to common trash, I took it all. The next morning, I stood defiantly on the front steps of Mistveil Keep and dumped everything onto the ground for the whole town to see. Some people asked if they could take some of it, which I gladly consented to. I couldn’t rid the town of corruption, but I could, you know, steal all the Black-Briars’ stuff, which is almost as good.

As they say, the couple that slays together stays together, or something like that. Whatever the case may be, Mjoll and I went questing together as equals and partners. We could both kick butt, the benchmark of every good relationship. Also, as I later found out, the game recognized Mjoll as an always essential character, meaning that it was impossible for her to die. That made quests into tougher dungeons that much easier, particularly when we were swarmed with enemies and I knew that Mjoll would always make it out on top.

Her immortality helped out on a few occasions. Once, when navigating through some old ruins, I found myself on top of a large winding bridge a few stories high; over the edge was a fall of several hundred feet. There was a sole skeleton impeding the path and I thought it would be a good idea to fus ro dah the thing over the edge and watch it fall to pieces.

Mjoll was a bit overanxious for action, as I noticed too late. While performing my dragon shout, Mjoll rushed forward to kill the skeleton and I accidentally sent both of them over the edge. I peered down and saw her body, unmoving. As I sped through the tunnels on the way down, I wondered if her essential character invulnerability also applied to falls from great heights. Mjoll, ever the badass warrior, met me halfway up. Seriously, she’s a keeper.

Yet, as awesome as it was to go adventuring with my wife and slaying all kinds of creatures together, it was only a matter of time until conflicts emerged. No relationship is perfect, as we are all only human. The conflict lay not with Mjoll, but her constant shadow. 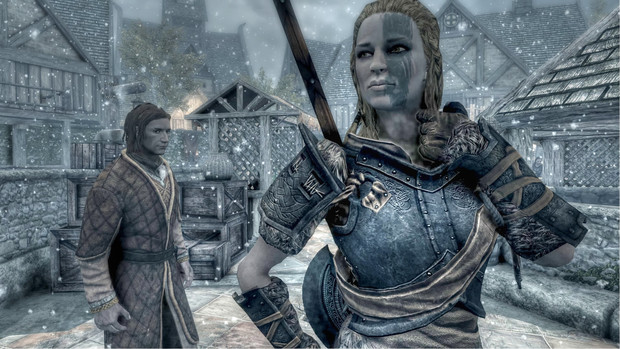 When I first arrived in Riften, I didn’t pay the man much mind. Though always near her side, Aerin wasn’t an intimidating character; in fact, you almost forgot he was even there. After Mjoll had lost her sword and nearly lost her life in the Dwarven ruins, Aerin had brought her back to Riften and nursed her back to health.

After Mjoll and I got married, I expected Aerin to disappear. After all, he hated the corruption in Riften and wanted to fight it; meanwhile, Mjoll and I were adventuring half a world away. Our paths were destined to diverge. Yet, here’s where the troubles started coming up. Whenever I dismissed Mjoll as a follower, Aerin was always there. Even if we were in our home in White Run and then Solitude, Aerin would show up as if out of thin air. It was as if he had been following us, never letting Mjoll out of his sight. Whenever I tried to confront him about it, he gave some flippant comment about the city’s corruption. 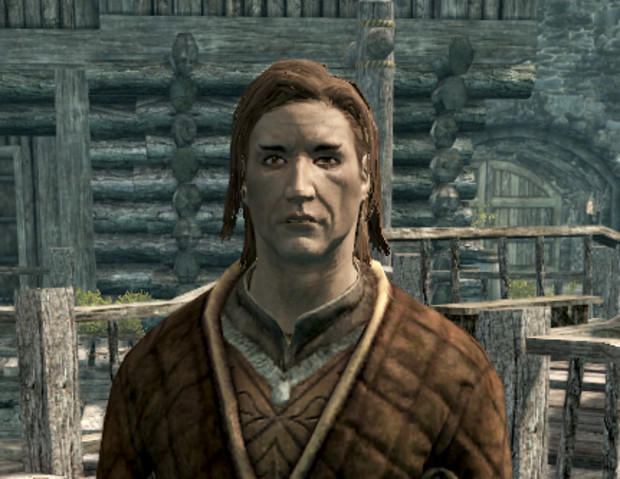 Mjoll's brought me nothing but safety and peace of mind... and some lessons with the blade.

Now, I’m a trusting man. Mjoll and I had made our vows in front of the priest and she was always sincere and loving to me, despite her limited dialogue choices. Aerin, on the other hand, was beginning to be a problem. A creepy problem. 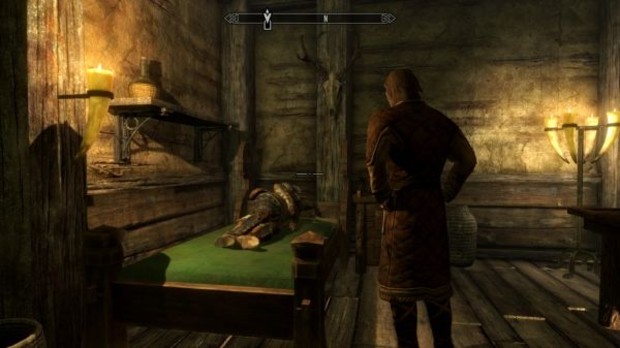 Sometimes, I would come home to catch him doing this. He never did anything, but just stood there. Watching Mjoll sleep. After we moved into a larger house in Solitude, I noticed that Mjoll never slept in our bed. Instead, she walked down to the house’s dank basement and slept on a bundle of rags on the floor. Now, I didn’t mean to suggest anything, but we lived in the freezing north. A nice, warm bed with a roaring fireplace nearby would be much better than sleeping on rags, right?

It was obvious that something needed to be done about Aerin. I’ve thought about outright killing him, but that isn’t really something a hero does, even if it is done to a creeper like Aerin. Plus, Mjoll would probably get mad at me for killing the man who saved her life, so that definitely wasn’t an option.

So, that’s what I’m left with after all this time. It’s been awhile since I’ve picked up Skyrim, so there hasn’t been any resolution to the Aerin problem. I’ve heard that you can force Aerin into dutiful service to the Blades, as it is certain he will die since he is not a fighter whatsoever. Yet, I don’t feel quite right pulling a David & Bathsheba on Aerin, even if Mjoll is rightfully married to me and Aerin is the party in the wrong. 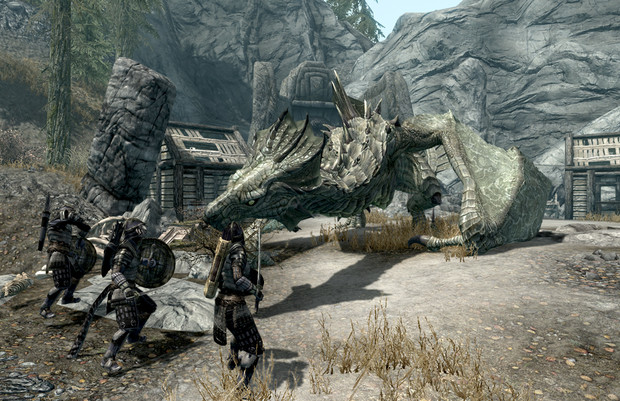 "I've never seen Mjoll this upset about anything. The city really gets to her." -Last words of a weird creeper

Ah well, that’s married life for you. There’s nothing like devising ways to murder your wife’s stalker to get into the Valentine’s Day spirit.